WWII Reparations: A view from Germany 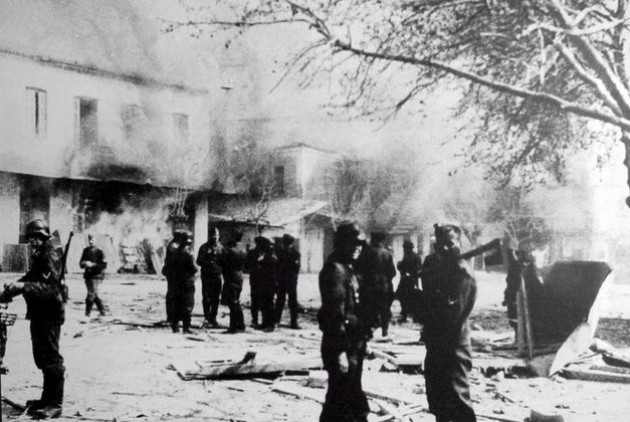 German troops in front of buildings set ablaze during the Distomo massacre (June 10, 1944)

A new book by historians Karl Heinz Roth and Hartmut Rübner, titled “Reparationsschuld. Hypotheken der deutschen Besatzungsherrschaft in Griechenland und Europa” (The War Reparations Case. The debts from the German Occupation in Greece and Europe) examines an issue that has been concerning Greece for many decades: the war reparations owed dy Germany for the Nazi occupation period. Greece is seeking compensation from Germany on three accounts - general war reparations, a claim resulting from the massacre at the village of Distomo in 1944, and the repayment of the forced loan exacted from the Bank of Greece in 1942-4.

The two historians had to overcome many obstacles in their research. As Nikos Heilas comments in "To Vima" daily (The reparations issue concerns the whole Europe, 15.4.2016), when it comes to documents concerning the reparations, German Chancellery protects its secrets like no other German institution. The legal department of the German Chancellery refused any access to important relevant documents on the grounds that the law forbids their disclosure before the expiry of thirty years ignoring the exceptions provided for researchers in the same law.

This culture of silence is rooted in the beginning of the 50’s when Greece brought the issue of reparations for the first time and the order for secrecy was given by Christian Democrat Chancellor Konrad Adenauer. Its codification was carried out twenty years later by Social Democratic Chancellor Willy Brandt. Its execution was assigned to the “reparations bureaucracy” (a term coined by the two authors), a group of senior officials, which gradually became autonomous and “educated” the ministers of the successive governments accordingly.

Despite difficulties, Roth and Rübner managed to find many documents in the federal archive of Germany as well as in Greece, Moscow and Washington. The evidence they discovered offers further support to the Greek reparation claims. The three most important contributions of this book on the reparations issue discourse are as follows: Firstly, the reparations issue remains one of the (unresolved) key issues of our time and it was the main cause of the Cold War. Secondly, there should be a “historically balanced”, financial reparation that would satisfy the victim countries without destroying Germany. Thirdly, Greece does not stand many chances if it keeps claiming the reparations alone.

As Karl Heinz Roth, historian and affiliate of the Foundation for 20th Century Social History (Stiftung für Sozialgeschichte des 20. Jahrhunderts) in Bremen, stresses in his interview with Nikos Heilas (Karl Heinz Roth: Greece should be allocated 185 billion euros), the reparation issue is a pan - European issue and it can only be solved by the joint action of the countries that underwent the German occupation or suffered the consequences of war:

"As you have mentioned, the biggest obstacle for the payment of war reparations is the so-called "bureaucracy of reparations." What does this term mean?

It refers to a group of 50-60 senior officers at the Chancellery and ministries that had undertaken the reparations case. The strictest of all was the Treasury, which was initially led by old Nazis, mainly Ernst Delacroix and his chief Wolf, who raised in this spirit generations of successors. Their successors applied this "reparations strangling" approach in specific areas.

What is the role of this bureaucracy today?

It works in the background. The main actor in the foreground is the head of the Legal department of the Chancellery, which obstructs any disclosure of important documents.

You managed, nevertheless, to find "hot" documents from earlier times.

We found enough documents. We found, for example, documents relating to a 1971-1972 discussion on the combination of Ostpolitik with the reparations issue. It was a secret meeting of all Willy Brandt government key executives. The decision was to not pay reparations. We were never given the relevant document, but thanks to the notes of a Ministry of Finance official, which we found later, we managed to reconstruct that discussion.

What is the total amount of reparations that Germany owes?

If you take into account material damages and human losses, the amount equals 5.866 trillion euros. This is almost twice higher than German economy performance in 2015 - which cannot be paid by any means.

What amount accounts for Greece?

About 185.3 billion euros, a bit less than the amount estimated by the Greek Parliament*. We only took into account inflation and excluded interest rates, because we believe that reparations should not be commercialized.

Germany, as you said, cannot repay such debt. Can you suggest any practical alternatives?

Germany must pay at least as much as it has paid so far, that is 1.2 trillion euros or, at least, 320 billion euros, i.e. the amount it disbursed in 2015 for pensions and allowances that members of the Nazi regime were supposedly entitled to because they had lost their jobs due to purging Nazis from public life.

What has Germany paid Greece so far?

It has paid 663.8 million euros, which hardly equals 0.5% of its total debt towards Greece.

What are the chances of your proposal’s success?

At first glance, they seem very little. On a second glance, however, there are many, because there is a culture of memory both in Europe and Germany. This is a good basis for the promotion of our proposal".

*The Greek Parliament's relevant committee wrapped up its probe on July 27, 2016. Greece is demanding approximately 269 billion euros – adjusted to inflation – for damages incurred during the Nazi occupation in World War II, including forced loans plus interest.