Bookshelf | Prime Ministers in Greece: The Paradox of Power 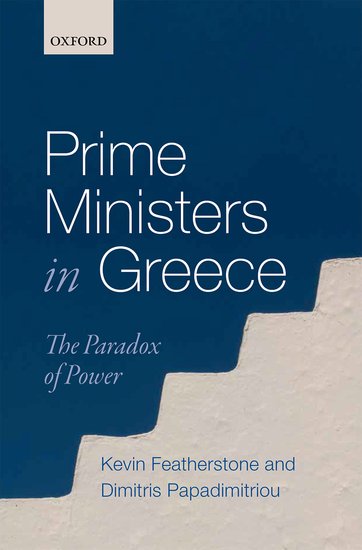 How can Prime Ministers establish control and coordination across their government? “Prime Ministers in Greece: The Paradox of Power” (2015), by Professors Kevin Featherstone and Dimitris Papadimitriou*, is concerned with this large question in one small, but highly problematic case: The Greek Constitution provides the Prime Minister with extensive and often unchecked powers. Yet, the operational structures, processes, and resources around the Prime Minister undermine their power to manage the government.

Building on an unprecedented range of interviews and archival material from 1974 to 2009, the book argues that the Greek Prime Minister has been ‘an emperor without clothes’. The costs of this paradox have included the inability to achieve key policy objectives under successive governments and a fragmented system of governance that provided the backdrop to Greece’s economic meltdown in 2010. The book concludes with the Greek system meeting its ‘nemesis’: the arrival of the close supervision of its government by the ‘Troika’—the representatives of Greece’s official creditors. The debt crisis challenged taboos and forced a self-reflection. It remains unclear, however, whether either the external strategy or the domestic response is likely to be sufficient to make the Greek system of governance ‘fit for purpose’.

Αs it is stated in the book, as well as in a book review by ELIAMEP’s Research Associate, Alexandros Nafpliotis, this is ‘the first in-depth study’ of prime ministers and their governments in Greece during the period after the fall of the Greek Colonels’ regime in 1974, and as such, it comes to fill an important lacuna in the literature. The book is full of striking revelations – for example, the fact that the centre of the Greek government contains virtually no permanent civil servant in its ranks, with all members of staff being political appointees – but also presents a sober explanation of the limitations that PMs face, such as the pathologies of a mass of laws. The authors are particularly careful not to fall into the trap of ‘national character’ stereotypes, recognizing, however, the role played by the setting and cultural habits (it is stated that these factors ‘nudge’ or limit, rather than determine, actors in a specific direction).

“If you gave me more advisers, I wouldn’t know what to do with them. I wouldn’t be able to see them on a regular basis, to know what they were doing. How could I trust them if I can’t see them?”

(Interview with a former Minister, commenting on another Prime Minister)