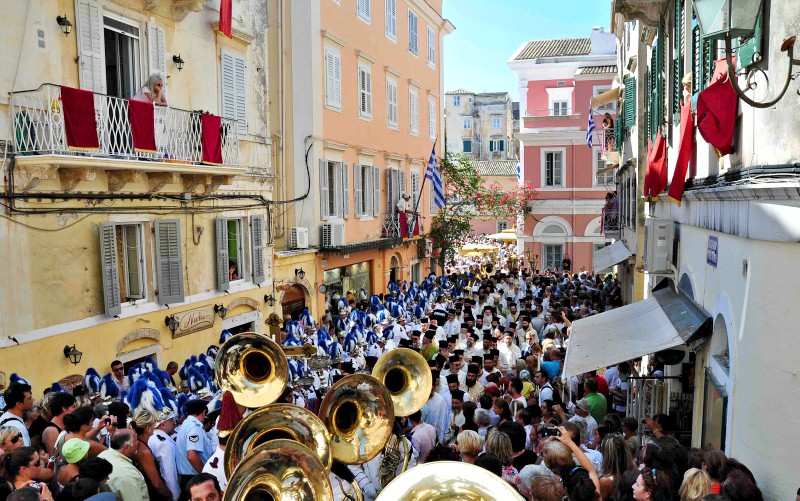 Easter, or Pascha in Greek, is the most important religious holiday of the Orthodox Church marking the resurrection of Christ and the chance of rebirth for mankind. Many of the customs practiced in Greece at Easter originated in the very distant past and were later adapted as Christianity spread, taking on religious significance.

Easter holds a special place in the heart of Greeks. Starting on ‘Clean Monday’, the period of lent begins and lasts approximately for 40 days during which no meat or animal byproducts can be eaten. After the 40 days of fasting, people celebrate Easter. The Holy Fire, which is used to light the priest’s candle, is brought all the way from Jerusalem, accompanied by high-ranking Orthodox priests and government officials. It arrives in Athens earlier on Saturday, before being distributed across the country.

Traditions can differ from one region to another. In some parts of Greece, the visitor can experience something truly exceptional:

Easter in Hydra: Hydra Island, in the Saronic Gulf, celebrates Easter in an exclusive way. In the evening of Good Friday, villagers carrying candles follow the procession of Epitaphios through the streets of the island, which endsin the picturesque harbor of the Kamini district. There, the believers who carry the symbolic coffin go into the sea, so that both the people and the sea are blessed by the Holy Epitaph. As the Epitaph is in the water, songs for the sponge divers and the island’s sailors are heard.

Footage from Epitaphios at the Kamini district

Easter in Corfu: The Philharmonic Society of Corfu accompanies the procession of the mummified body of the island’s patron, St. Spyridon, as it is carried around the city on Good Friday. After the First Resurrection, which takes place in the Metropolitan church, the bells of all churches begin to toll and people begin throwing thousands of botides (a special type of clay pot), filled with water and laurel from their windows. This is a way to end the winter dormancy and celebrate the rebirth of nature. The locals also believe that it is a way to chase “evil” away. Easter Sunday is filled with music from the island’s numerous bands that march around the city center playing songs.

Easter in Chios island: On Easter days there is a well known t custom of Chios island, the “rocket war” that takes place at Vrontados village on the Resurrection evening. Many visitors arrive at the island to admire this spectacular “war" between the two largest parishes of Vrontados, Saint Markus and Saint Erythiani. From the time of the Ottoman possession yet, the locals hold this custom with the only difference that that time they used small guns. Goal of the two opponents is to hit the others’ church steeple. For those who will have the opportunity to experience this custom, you will be lucky enough to watch a very spectacular show with the countless fireworks flying through the air and enlighten the night sky. 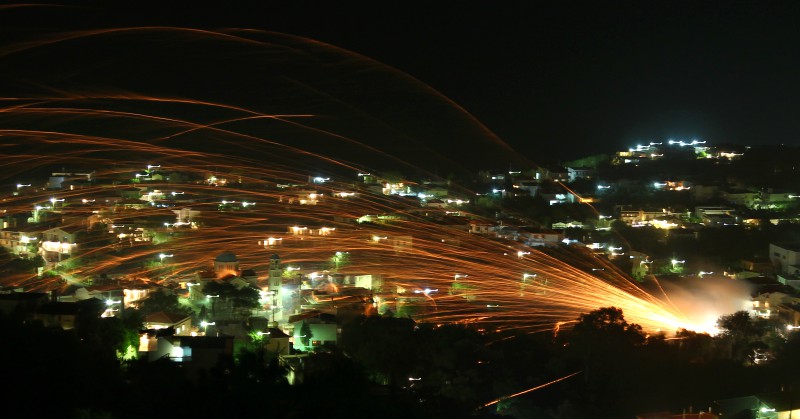 Easter in Patmos: Patmos is an island with deep religious roots. The island is famous for the Cave of the Apocalypse, the place where it is believed that St John the Divine received his visions from Christ and transcribed the Book of Revelation. It’s worth mentioning also that the Monastery of St. John the Theologian is located in Patmosandis considered asone of Greece's most important centers of worship. In the evening of Easter Saturday, the Monastery opens its gates to welcome people for the celebration of the Resurrection. Locals and visitors have the unique opportunity to attend an Eastern Orthodox mass in a mystic atmosphere of devout concentration. When “Christós Anésti” (Christ has risen) is heard, an impressive fireworks display lights up the night sky. On Easter Sunday at 3 in the afternoon, the “Liturgy of Love” also takes place at the Monastery of St. John. During this liturgy, which is dedicated to the Second Resurrection, the Gospel of the Resurrection is read in seven different languages.

Easter in Cyclades islands: The Passions and Resurrection of Jesus Christ are celebrated with special splendor and devoutness in each island of the Cyclades group.

An impressive tradition on the islands of Kythnos and Lesvos, is the tradition of the swing. A swing is created in the main square on Easter Sunday, where girls and boys dressed in traditional costumes get on to swing back and forth. If someone sways the swing, then they must pledge before God and man to marry the one sitting on the swing.

On Folegandros island, the icon of the Assumption is taken from the Church of Agios Georgios and then carried around the town for three entire days. The icon procession passes through the homes of all religious people. 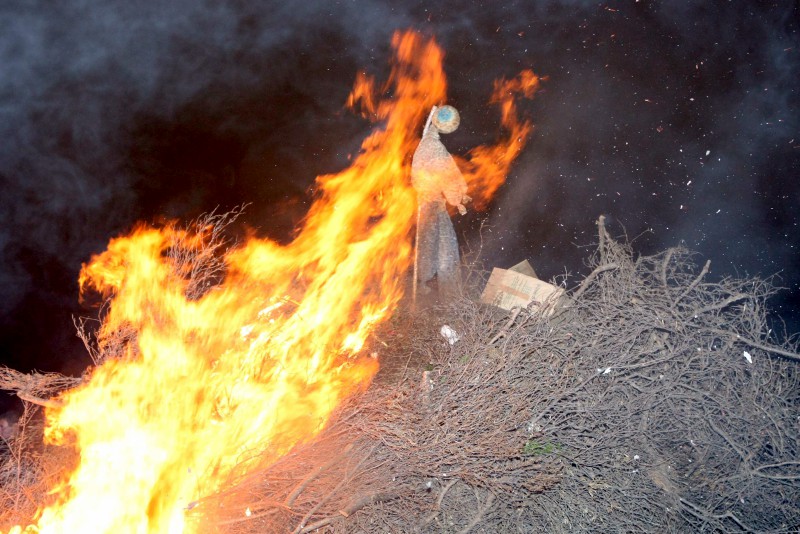 Crete: The religious feeling at Easter in Crete is intense and the celebration does not include only the Sunday of the Resurrection, but also the week before, which is called Holy Week. The churches are decorated beautifully with buds and flowers that have been intricately woven together. On Holy Friday,the Church mourns the death and burial of Christ. Housewives usually do not do any housework on that day, avoiding even cooking. The Epitaph procession takes place across the island and the faithful venerate it and go under it to receive God’s grace. In many villages of Crete on Holy Saturday, people make preparations for the founara of Judah. Founara means a big fire where they burn Judah every year. On the morning of Holy Saturday the boys of the village gather dry woods and branches near the church. At the top of the wood pile they place the effigy of Judah, and after the liturgy of the Resurrection they “burn Judah”.

The “burning of Judah” takes place also in Northern Greece. In the region of Thrace, an effigy of Judah Iscariot is paraded around by children in the streets who ask locals for branches so they can burn him. On Holy Friday, the procession of the Epitaph stops outside a chapel, where the fire is ready to burn Judas. After the reading of the Gospel, people light the fire and burn the effigy.

In the village of Arachova (central Greece), locals celebrate Easter along with the name-day of Saint George, a moveable feast which traditionally falls near Easter.

On Easter Sunday, a procession carrying Saint George’s icon parades around the village. Over 3,000 villagers dressed in colorful traditional clothing follow the icon procession, while dancing troupes entertain the crowd. 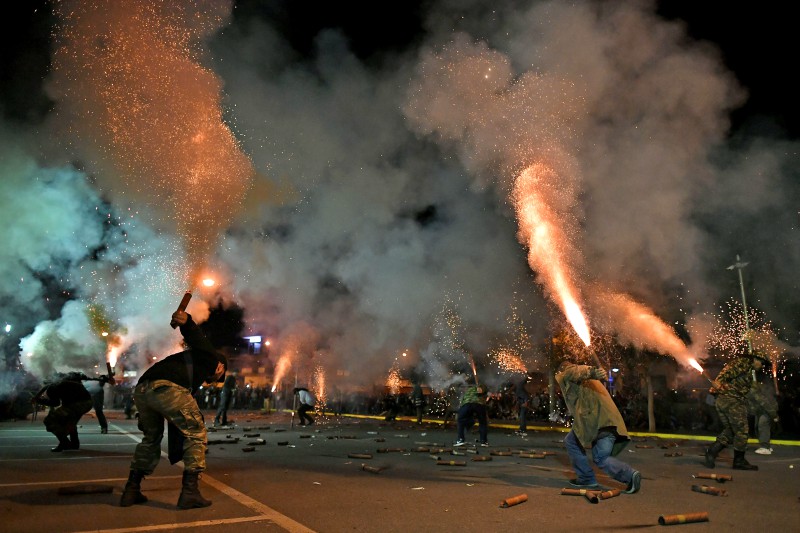 In Kalamata, (Peloponnese), there is a tradition called “saitopolemos” .The participants are divided into 10 to 15 teams, each consisting of 15 to 30 young boys dressed in traditional costumes. They are armed with “saites”, (cardboard tubes filled with gunpowder) which are then lit.

Read also via Greek news Agenda: The tradition of the Epitaphios procession; Apokries: The Greek Carnival; Orthodox Easter in Greece: A Celebration of Spirit, Traditions and Nature

The Costas Tsoclis Museum on Tinos Island: a Dive into Art