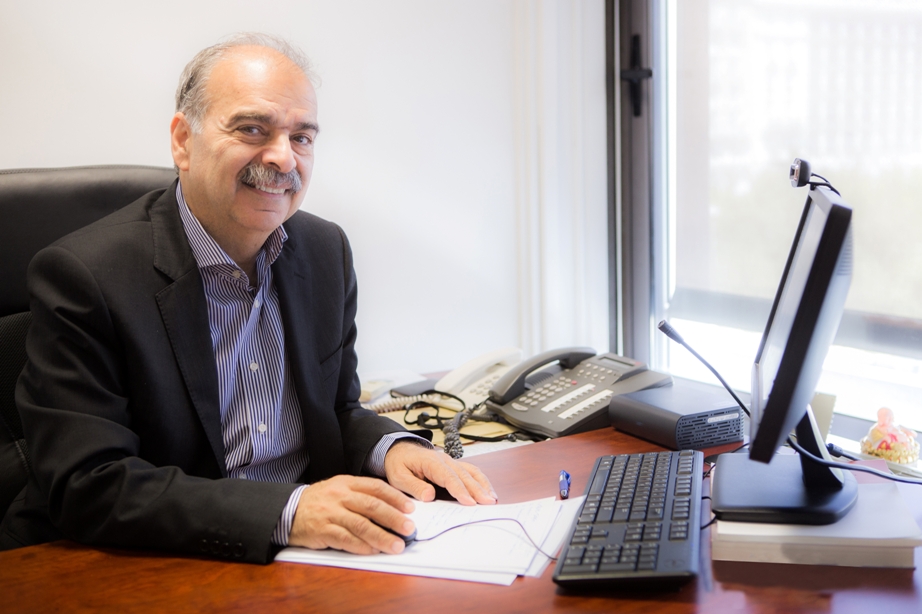 Lois Labrianidis is Secretary General for Strategic and Private Investments at the Ministry of Economy & Development, Professor in the Department of Economics, University of Macedonia Greece and Head of the University's Regional Development and Planning Research Unit.  He is an economic geographer (BA – Aristotelian University of Thessaloniki, MA -Sussex, Ph.D. -LSE). His scholarly publications include many articles and books.

Professor Labrianidis spoke to Greek News Agenda* about Greece's comparative advantages, the structure of Greek entrepreneurship and its limited demand  for highly specialised personnel, the need for the Greek economy to focus on knowledge intensive activities, the “National Development Strategy 2021” and government’s “Build knowledge and partnership bridges with Greece” initiative that aims to networking the world of educated Greek professionals and entrepreneurs, "wherever they are". Labrianidis invites members of the Greek diaspora to visit the initiative's website, use it, spread the word and support it.

More than 250,000 Greek citizens appear to have left Greece in the past 7 years heading to various destinations primarily in Northern and Western Europe. What are the motivations of these “crisis” migrants and who exactly do emigrate?

To start with, I want to point out that the phenomenon is not new. Although it had become a serious issue by the 1990s, it undoubtedly worsened during the crisis period. There are many reasons for this: unemployment, underemployment, and attempts to find employment more in line with a person’s skills/qualifications or with better prospects or even the desire to live in a different cultural environment (cosmopolitanism). However, the main reason, I would say, is the long term imbalance between supply and demand of work for graduates, which arises from the limited demand of the Greek economy for highly specialised personnel.

Unfortunately, although, up until now, it hasn’t been possible to record the migration of specialised personnel, I believe that it may be possible if comprehensive records were to be kept and this exactly is one of the main goals of our initiative. We estimate that today there are approximately 250,000 Greek professionals who live and work abroad.

This disparity is not a result of the allegedly large, or  surplus numbers of graduates and the outcome would be tragic if an approach were taken to alleviate the problem by reducing this alleged number of graduates in accordance with a limited demand, since that would mean the degradation of the country in the international division of labour further with incalculable negative consequences.

It is a myth that in Greece the percentage of graduates is disproportionately high, at least since in fact it is below the EU average (during the 2006-2016 period, for the 25-34 age group the average percentage for the EU 28 was 34.1, while for Greece it was 33.1as for the OECD for the 25-64 age group, the average percentage for 2015 was 31 while for Greece it was 28) but mainly since we need to invest in the emerging knowledge economy as a prerequisite of success in the new economic world order. In this respect, an important aspect of the question relates to the structure of Greek entrepreneurship and broadly speaking of the Greek economy, which, in recent decades, hasn’t been orientated towards knowledge intensive activities. Additionally, we shouldn’t overlook the fact that the migration of highly educated personnel to other countries is a timeless phenomenon as far as further acquisition of knowledge from the ‘source’,that is the university or research centre specialising in a specific subject, is concerned. A third and very significant aspect is obviously related to the economic crisis in the country while simultaneously other countries are implementing actions to attract young scientists, which are accompanied by very attractive financial rewards, the prospect of career advancement and a better standard of living.

What is the purpose of the government’s “Knowledge and Partnership Bridges” initiative and how does it connect with the national goal of “brain gain”? Does Greece’s "intellectual capital" continue to be a strong national asset despite the numbers of young people that are leaving the country?

The National Development Strategy 2021 of Greece advocates the need for a paradigm shift and more specifiacally it argues that the country should develop towards the 'knowledge economy', which means that human capital and even more skilled human capital is a crucial factor. Thus the government wants to utilise its human resources irrespective of where they live today.

However, quite a number of Greek professionals living and working abroad do not want or cannot return to the country immediately. We must, therefore, find a way to work together, both in the country where they are and by creating appropriate conditions for the development of  their business or research activities in Greece. It is for this reason that we have developed the initiative ‘Build knowledge and partnership bridges with Greece’ (http://www.knowledgebridges.gr/). Let’s not forget that over time Greeks have created open-minded diaspora activity networks which safeguard and strengthen national unity and prosperity (from Greek communities in Egypt and the Middle East to Austria, London and Australia).

More than anything, we want this platform to be a networking world for Greeks, wherever they are. The success of the initiative depends critically on all Greeks around the world! 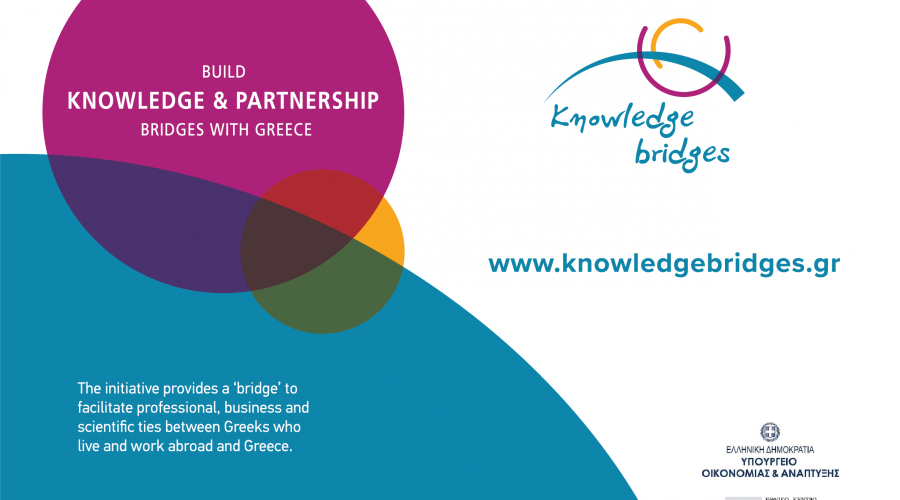 Through the initiative’s website, you can find partners, information about funding programmes and scholarships within Greece etc, help a Greek business to sell its products in the country where you live and are active, help friends who are self-employed or are employed in a business in Greece to come into contact with businesses abroad, or even set up a business in Greece alone or jointly by acting as a mentor/business angel to a start-up.

Through the platform’s “Partnerships” sector, we intend the initiative to act as a bridge between young and/or renowned Greek professionals and entrepreneurs abroad and Greeks that live in the country (that is professionals that are self employed, or employees of a company in Greece or a university or a research centre). Greek professionals and entrepreneurs who work either abroad or within the country, can register on the co-operation /partnership section of the platform by completing details regarding their professional or business background and the needs they have for work in Greece or for networking with the country or even with other young professionals, in this way creating an online community.

Greek organisations can register on the platform by completing details, either about open job positions or the need for partners and networking with Greeks abroad. The main objective is to create links, ultimately to create new opportunities for all Greeks around the globe.

‘Bridges’ is a national initiative, in which I strongly believe, and from which only benefits will result on an individual, local and national level. With the opportunity this interview gives me, I invite members of the Greek diaspora to visit our site, use it, spread the word and support it. Their contribution is invaluable, since the return to national and individual prosperity is not a matter of collective responsibility but also the result of personal effort and the participation of everyone.

According to the latest data, R&D investment in Greece has been growing steadily in recent years. Is the country moving towards a knowledge based economy and how?

Since the ‘Brain Drain’ is a structural problem, there is a need for fundamental changes in our development model and the development of a new social mentality among horizontal political actors, producers, the state etc. Our economy needs to produce more complex products and services. This is the new development model of the National Development Strategy 2021. The outcome of this will be medium to long term. To alleviate the problem we are discussing, policies are already being exercised, mainly small scale, to target the containment of the outward flow of young professionals, for example through the fostering of innovation and self-employment of higher education graduates, the hiring of doctorate holders by Higher Education Institutes so that they gain academic teaching experience and so on.

Which are the main comparative advantages of the Greek Economy? And which are its main weaknesses? Does Greece have prospects in the industrial sector and which other sectors of the Greek economy need special support?

Greece has a number of strengths in comparison with neighbouring countries and generally, for example: an established democracy, a key geographic and geostrategic position, being a member state of the EU and has substantial infrastructures. In the present investment environment, adequately supported, Greece could become a springboard for major investment activities in the EU and Europe generally. The country has natural and/or comparative advantages when investing in tourism, real estate, agri-food, various branches of industry, transport and energy.

What I really want to stress is that the country has high quality human resources with proportionately low wage costs, exceptionally good weather conditions and an exceptional quality of life, with amenities and infrastructures (good schools etc). Such advantages could attract knowledge-intensive investment (e.g. research centres, businesses etc) which would provide employment for highly specialised people who opt to live in areas which can offer them a good quality of life.

In this way, the country would not only keep its specialised human resources with a significant proportion of those who had left returning, but could also be attractive to other specialised personnel from abroad.

One of the special traits of the Greek economy is the small size of enterprises...

Historically, SMEs are considered central in identifying entrepreneurial activities in Greece which are important at the present time. It is commonly acknowledged that SMEs are the backbone of the domestic economy. According to 2014 data, in Greece 85 % of private employment is concentrated in SMEs and more than 50 % in micro enterprises (0-9 employees).

What are the main priorities of Greece’s development policy as far as incentives for investment, employment perspective, entrepreneurship, innovation in the private sector and exports dynamism?

Paradigm shift to change the development model and move towards a knowledge economy with reduced social and regional inequalities. We need to move to a value chain which produces products and services of high value added. Businesses need to be more outward looking and innovative.

What kind of branding does Greece need?

One might argue that the key factor of the global economy is no longer goods, services, or flows of capital, but the competition for people. Of course companies have always sought to attract highly skilled employees; the difference today is that instead of bringing those skilled people to their existing locations, companies are setting up facilities based to a great extent on where the highly skilled people are residing.

Greece, has high quality/middle cost human capital, an exceptional climate, world-class cultural assets, wonderful nature, quality of life, high quality schools, notable infrastructures, democracy, is an “island of stability” in a very good geostrategic position between East-West and North-South, security, etc. Having all that, Greece appears to be an ideal place to attract investments that require the employment of highly qualified people from all over the world. These people, who are highly skilled and have the luxury to choose where to work, can afford to choose where to live based on the quality of life offered in a country. In this sense, our country is an ideal destination for such people and this in turn will attract businesses that want to employee highly skilled employees.