In this week's "Culture Agenda": book presentation of “Futures: Poetry of the Greek crisis” at the Onassis Cultural Centre (OCC), Ioannis Mitrakas exhibition at the Benaki Museum, the “Grand Detour” exhibition at Beton7 Gallery, Contemporary Music Without Codes at the Athens Concert Hall, Sunday Strolls at the National Archaeological Museum, Music concerts by OCC & Panteion University, as well as interesting festivals all around Greece, such as Bell Roads Parade in Thessaloniki and Artfools filmfest in Larissa. 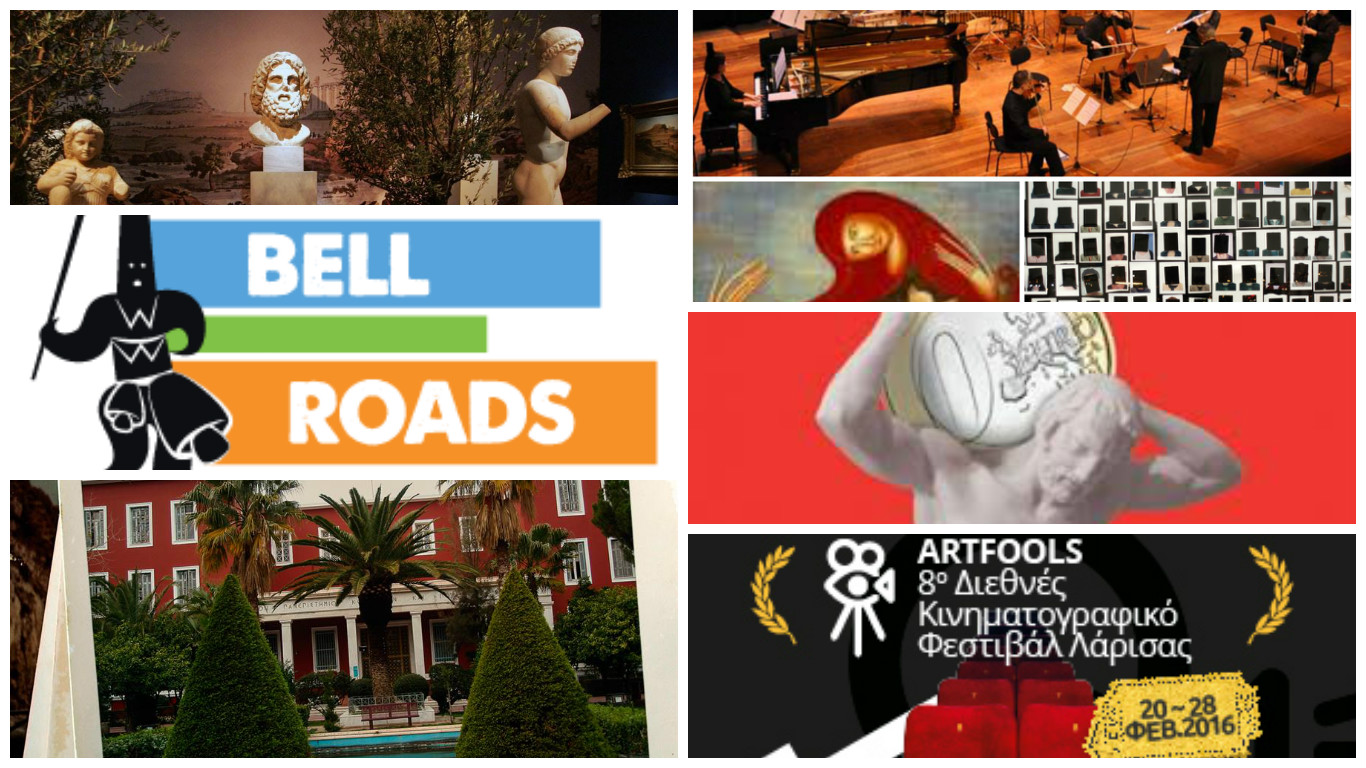 The new poetry anthology “Futures: Poetry of the Greek Crisis”, that aims to respond to the social and economic disaster that has shaken the European experiment to its foundations, is presented at the Onassis Cultural Centre on February 18, 2016. The main speakers include the editor and translator of the book, Theodoros Chiotis and Dimitris Papanikolaou, academic consultant to the Cavafy Archive, Associate Professor of Modern Greek and Fellow of St. Cross College. The presentation will also feature readings from the anthology by well-known Greek poets.

The Benaki Museum, under the auspices of the Ministry of Culture, showcases a retrospective exhibition of Ioannis Mitrakas (17/02/2016 - 27/03/2016), a pioneer contemporary self-taught artist, who derives his prototypes from Byzantine and neo-Hellenic tradition, Russian art, Greek history and Mythology, and eventually his contemporary social environment. More than 85 works, depicting innovative and allegorical themes, will be presented together with the works of the Byzantine and post-Byzantine Collection of the Benaki Museum, introducing a fruitful dialogue, focused on the unbroken continuation of Byzantine and post-Byzantine art, stimulating the evolution of the contemporary neo-Byzantine art.

Beton7 Gallery presents Euripides Altintzoglou's solo exhibition entitled "Grand Detour" (February 19- March 4), with a collection of works that explore a wide range of issues related to the crisis of late capitalism. The collection does not solely target socio-economic phenomena and their consequences, but it also attempts to increase the production of new forms of political actions.

With an all-day event titled “Contemporary Music Without Codes” (February 20) at the Athens Concert Hall (Megaron), Theodore Antoniou and Christos Papageorgiou propose a quite different, charming and subversive approach to contemporary music.Discussions and presentations on the subject of contemporary music and its relationship with the visual arts and movement, improvisation competition, musical “installations” and much more, followed by an evening concert with works by J. Cage, S. Reich, G. Schuller, A. Logothetis, L. Hatzileontiadis, J. Christou and Theodore Antoniou.

The National Archaeological Museum brings to light innumerable stories of Athens, as recorded by European travelers and excavation findings. On February 21 – and every Sunday until April 24 - archaeologists will be introducing the audience to wonderful and unknown stories of Athens, stories that no museum halls could ever narrate in detail. TheNational Archaeological Museum is the largest museum in Greece and one of the world's great museums. Its abundant collections, with more than 11,000 exhibits, provide a panorama of Greek civilization from the beginnings of Prehistory to Late Antiquity.

A series of concerts kick off on February 24 at Panteion University in cooperation with the Onassis Cultural Center (OCC). The concerts are the result of a collaboration between OCC-selected musicians —most of them young and up-and-coming— and students studying “Culture and Cultural Management” in Panteion’s Department of Communication, Media and Culture. The first concert will feature compositions by Karlheinz Stockhausen, George Crumb, Christos Samaras, Evangelia Kikou, Michael Amann, Dimitris Economou, Rudolph Jungwirth, accompanied by the music of Ria Georgiadou (flute) and
Sven Birch (piano).

During the month of February, Thessaloniki is hosting, the 3rd European Festival of the Meeting of Bell Wearers, “Bell Roads”. All the activities of the Festival have as an axis to link the tradition of bell-wearing in Greece with similar ones in Europe. It is a big celebration consisting of various events, such as scientific meetings, photographic exhibitions, film screenings, workshops, shadow theater and concerts. The manifestations culminate on February 21 with an impressive parade of bell-wearing groups from Greece and Europe.

The International Cinema Festival of Larissa “Artfools” (February 20-28) will take place for the 8th consecutive year in the City of Larissa under the auspices of the Region of Thessaly. For about 10 days, Larissa lives in the rhythm of cinema, hosts new artists and offers quality cinema screenings, happenings, cinema workshops and master classes to local residents and beyond. The Festival’s attendees can also visit the city’ sights such as the Ancient Theatre, the Municipal Art Gallery, to live the city’s vibrant night life while having the opportunity to participate in short excursions to places such as Meteora, the Mount Olympus and the traditional village of Ampelakia.