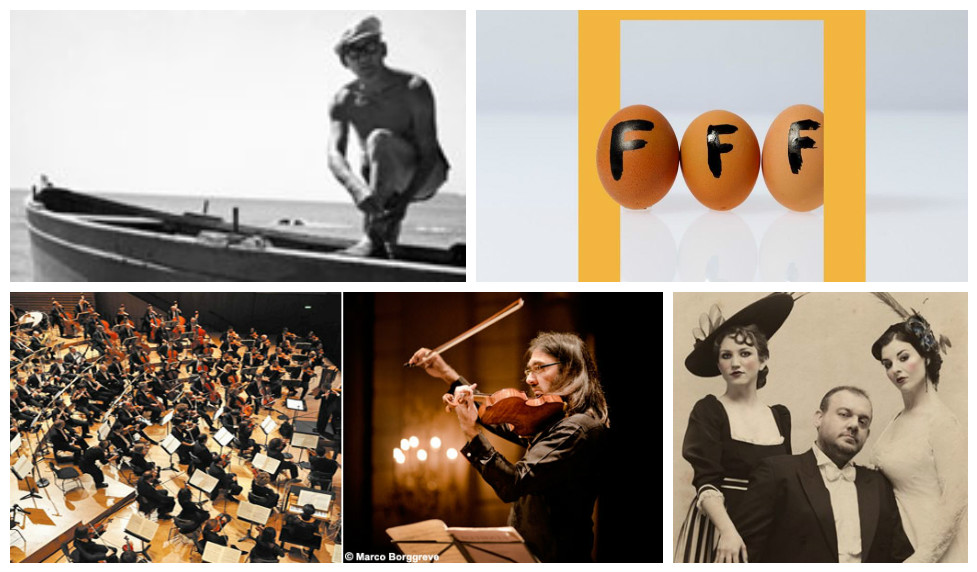 The 3rd Fast Forward Festival (FFF) will be taking place at Onassis Cultural Center in Athens from May 16 to May 31. This year’s festival is titled “On the Border(line)s of Art” , focusing on the thin line which separates the powerful from the powerless, revolution from civil war and democracy from autocracy. With its epicenter fixed firmly in public space, the Festival negotiates the issue of borders and boundaries. Occupying, as it does every year, the grey zone between theatre, dance, performance, film and contemporary art, the 3rd FFF -with featuring artists from Amsterdam, Beirut, Brussels, Cape Town, Melbourne, Ramallah, Sheffield and Tel Aviv– proposes alternative geopolitical and cultural narratives in artistic terms.

As part of the events “Reference to Ελ/Le Corbusier", the Benaki Museum presents the exhibition “Lucien Hervé -The summertime of Monsieur Le Corbusier” (May 12- 29) with Hervé's photographs, as well as drawings and sketches of Le Corbusier and his Cabanon itself, partly reconstructed, creating a perception of life and architecture that identify the ideal and the simple.

Acclaimed Greek musician Leonidas Kavakos takes on the dual role of violin soloist and conductor with the famous Radio France Philharmonic Orchestra at a special concert taking place on May 12, at the Athens Concert Hall. Kavakos has recently been announced as the winner of the Léonie Sonning Music Prize 2017 - a prestigious prize which is awarded annually to an internationally recognised composer, instrumentalist, conductor or singer - while the Radio France Philharmonic Orchestra is considered to be one of the leading orchestras in Europe.

The most popular Greek operetta, “The Godson” by Theophrastos Sakellaridis, makes its comeback at the Greek National Opera. A new production conducted by Yorgos Aravidis and Andreas Pylarinos, and directed by Simos Kakalas, will premiere on May 13 for only seven performances at the Olympia Theatre. The operetta has left its heavy mark on the Greek National Opera since. Since it was first performed in 1946 by the company’s operetta troupe, it has been presented in 33 out of a total of 76 artistic periods in its history.  Kakalas’ reading of “The Godson” is highly anticipated and undoubtedly will make his own contribution in renewing the Athenian operetta and re-establishing its relationship especially with the young audience.

The 2nd Street Art Festival “ArtWalk” kicks off at the Archaeological Museum of Patras (May 13- June 13, 2016) aiming to promote the art and techniques of alternative cultural forms with special emphasis on interventions in public space, complemented by permanent exhibitions, seminars and workshops. This year’s Festival, which will operate as a creative forerunner for the 4th International Art Festival of Patras “RE-culture 4”, includes a tribute exhibition to Street Art in Greece in two sections. The first section is a photo show presenting the history and evolution of the Greek Street Art from the 80s until today, with wall works that are now lost, and the second section presents street art and graffiti from a tense area of ​​Athens, Exarchia, during the years of crisis (2008-2015).

The 1st Athens Coffee Festival will take place in Technopolis, Athens (May 13-15) giving the consumers -for the first time ever in Greece- an opportunity to try coffee varieties from all around the world and discover aromas and flavors that they could not even imagine possible, to attend educational seminars and presentations and talk with experienced roasters, talented baristas, specialized buyers and renowned guests from Greece and abroad!

The 62nd Kifissia Flower Show has opened its doors at the “Dimitris Zomopoulos” Kifissia Park since May 5 and will run through Sunday, May 22, featuring more than 2,000 species of plants, spices, and herbs. Experts are there to give advice concerning garden designs and terraces. Visitors can get information about which plants to choose and how to take care of them. Every day will be different with several speeches on nature, cooking with fresh herbs in the outdoor kitchen, interactive workshops, theater performances and musical events.

The 4th year of Spetsathlon, the biggest triathlon in Greece is taking place on the beautiful island of Spetses (May 13-15), under the auspices of the Greek National Tourism Organization and the Municipality of Spetses. On Saturday, May 14, a unique 1000m Swimming Race will take place for the second time as well as the 3rd 25K Spetses Bike Race around the island. The triathlon will take place on Sunday (15/5) with two races: Spetses Triathlon Sprint (750m swimming, 25k biking & 5k running) and the Olympic Spetses Triathlon Endurance (1500m swimming, 50k biking & 10k running). Apart from the races there is also a vast variety of social and cultural events, such as the 1st Twilight Charity Run and the Melissa Pasta Party.

The 9th London Greek Film Festival will take place from May 15 to May 21. Founded in 2008 by director Christos Prossylis and London’s Cosmocinema, the Festival - independent, alternative, progressive and creative as ever - remains loyal to its objective, despite the adversities: to act as the international meeting point for contemporary Greek film, accepting scripts by Greek filmmakers from around the world, but also by non-Greeks whose work bears some Greek interest. On the last day of the Festival, May 21, Theatro Technis will host the ‘Odysseus Awards’ ceremony, during which the best films by category for 2016, will be announced, as voted by the judging committee. Awards will also be presented to best actors, screenwriters, filmmakers and performers.