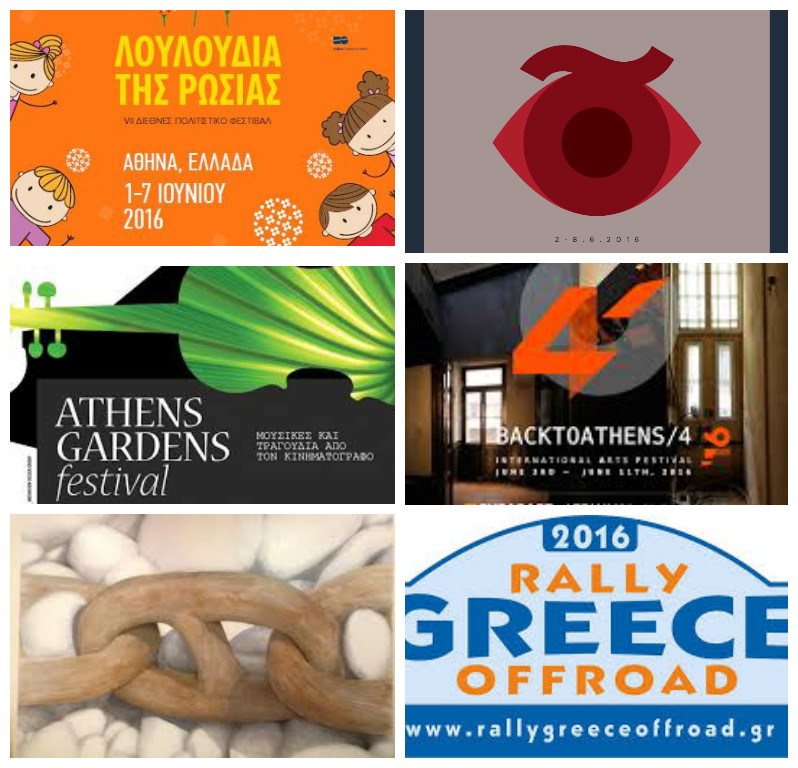 The VII International Cultural Festival “Flowers of Russia” takes place in Athens from June 1, to 7. The festival is organized by the Ministry of Culture of the Russian Federation in the context of celebrating 2016 as the Year of Greece in Russia and the Year of Russia in Greece. The festival includes a variety of events such as a gala-concert of classical music performed by young talents of Russia, a performance by the Ekaterinburg Theatre for Young Spectators, a round table discussion, exhibitions of puppet-marionettes and children’s drawings and workshops on acting and ballet.

Once again, the International Arts Festival Back to Athens/4 will unite local and international artists from Greece, Austria, Germany, Denmark, Switzerland, Japan and Cyprus within the historical Athenian district of Exarheia from June 3 to 11. The festival comprises 5 exhibitions, visual art installations, screenings, music and theatre performances and many other events.

The Athens’ Hispanic Film Festival (FeCHA) will take place June 2 to 8, presenting for the first time in Athens thirteen multi-awarded films from Spanish speaking countries. The festival will present a wide range of movie genres; from romantic comedies and Spanish thrillers to politically and socially conscious films from Latin America. All films will be in Spanish with Greek subtitles.

Visit the National Garden in the center of Athens from June 3 to 5 and enjoy the Athens Gardens Festival 2016. 8 thematic concerts “Soundtracks music and songs” will be performed and turn the National Gardens into a charming area of artistic expression and creation. Entrance is Free.

The B&M Theocharakis Foundation presents an exhibition of works by Sotiris Sorogas. The show features works created between 2010 and the present. Pieces of wood and piles of stones are among the themes here, presented in meditative scenes in the artist's customary subdued color palette which evoke a sense of silence.

The fourth edition of the international off-road event titled “Rally Greece Offroad” will be held from June 2 to 5. The event will take place in North-western Greece, namely in the mountain routes of Grevena, Kozani, Kastoria and Florina. Participants from Greece, Italy, Turkey, Israel, Germany, France, Bulgaria and other countries will have the opportunity to cross beautiful areas and drive through forests of unique beauty, such as Varnous, Vitsi and Kaimaktsalan.

The Paros Cycling Tour will be held on June 2-7 on the island of Paros and will include multiple cycling races and events through its duration. Apart the cycling races in various locations of Paros (Pounta, Aliki, etc.) the program includes walks through Parikia’s alleys, free time for swimming, sea sports, etc. and tasting of local delicacies as well.