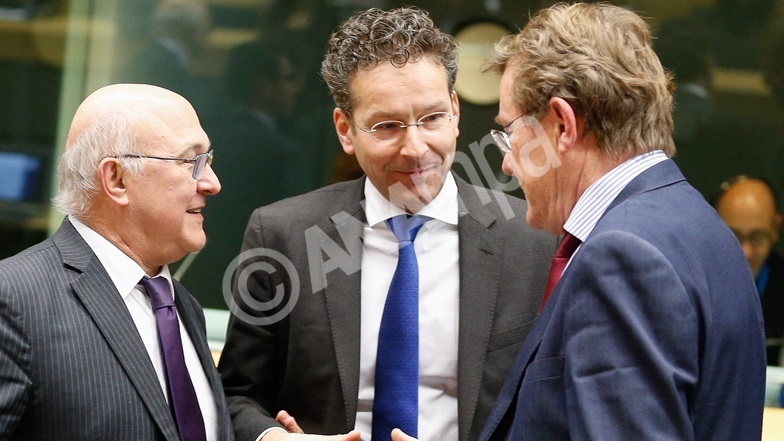 On Monday, March 7, after the completion of the Eurogroup meeting, European Commissioner for Economic and Financial Affairs, Pierre Moscovici, the managing director of the European Stability Mechanism (ESM) Klaus Reglin and Eurogroup President Jeroen Dijsselbloem confirmed at a joint press conference that the institutions will return to Athens this week to complete the first review of Greece’s adjustment program and that talks on debt relief will start soon. Dijsselbloem noted that the package of measures needs to become even more solid, needs to go even deeper than what’s been put on the table so far, while Moscovici said about the completion of Greece’s first program review that it could be achieved soon as it is in everyone’s interest, all the more so considering Greece’s refugee crisis.

Finance Minister Euclid Tsakalotos confirmed that the heads of the institutions will return to Athens. “The institutions agreed to return. The IMF also agreed to return, despite some differences,” he told journalists.  “We expect further talks, to complete the first review in time and to have a conversation about debt. I’m sure sensible people when they get across the table will come to sensible conclusions,” Tsakalotos said as he left the Eurogroup meeting.

Prime Minister Alexis Tsipras welcomed the Eurogroup statements: “We welcome the Eurogroup's commitment to proceed with debt relief as soon as the review of the program is completed,” Tsipras tweeted on his official account.

Encouraging reports for the Greek Economy

The Bank of Greece estimates that a positive review would boost the real economy and open the way for discussions on debt relief. Contrary to what was the case in 2015, 2016 could mark a new beginning leading Greece out of the crisis and onto a path of sustainable growth. In this respect, Bank of Greece Governor Yannis Stournaras presented his Annual Report (2015) at the 83th Annual Meeting of Shareholders (25.2.2016) which showed that according to Bank of Greece estimates, the conditions shaping the path of the Greek economy in 2016 appear to be more favorable than a year ago, expecting an end to recession and a slight recovery for the economy during the second half of this year, “provided that political stability is maintained and uncertainty, which harms investor confidence, is eliminated”. Nonetheless, “the prospect of recovery crucially hinges on a number of prerequisites, including reaching an agreement on the first review of the program and the adoption of the agreed measures by the Hellenic Parliament, commitment to implementing the program, and action to restore political and economic stability and foster a return to normality”.

A similar outlook was projected by the Foundation for Economic & Industrial Research (IOBE) in its fourth quarterly report for 2015  (released January 2016) on the current state and future of the Greek economy.  The report also gave an estimate for a milder than anticipated recession in 2016 (0.5%, while its previous forecasts in October had projected a 1.5 to 2.0 recession) but underlined that investment continues to be a weak link for the Greek Economy and Growth cannot come before conditions are created for a strong investment wave.  The report stressed that there were no convulsive reactions after the imposition of capital controls, as the banking system and  a significant part of the private sector had been more or less prepared and the tourism industry was untouched during this critical quarter.

There have been disagreements between the IMF and the EU institutions over the Greek adjustment program that delayed its first review, creating unease and fears that further delays could have more negative results in the Greek economy. Euclid Tsakalotos urged international lenders on Monday to complete their review of Greece's reform measures by May 1 and bring to an end, the lengthy discussions over pension cuts. “This question of time is important if we want to move from a vicious to a virtuous circle”, Tsakalotos told the German newspaper Frankfurter Allgemeine Zeitung (6.3.2016). Speaking in Parliament (3.3.2016) he also expressed his concerns over the IMF’s insistence on more measures, compared with the ones agreed last summer, especially since the economic conditions in Greece have improved markedly since then "and there is no one economist suggesting that we performed worse than expected, so the reasonable thing was to talk about less measures". Tsakalotos said that pensions cannot be cut further since they represent a basic family income and they have been cut 11 times in the past few years.

Poul Thomsen, the director of the IMF’s European Department, wrote his thoughts about a Workable Program for Greece on the IMF direct blog (Greece: Toward a Workable Program, 11.2.2016) where he argued that additional austerity measures are needed in order to secure a 3.5% primary surplus (demanding additional ‘savings’ measures of 7.5-9.5 billion euro (4%-5% of GDP) and that there is limited room of alternatives to more pension cuts than those included in the Greek government’s pension reform plan. He further underlined that “most other spending has already been cut to the bone in an effort to protect pensions and social payments, while the failure to broaden the base and improve compliance has already caused too much reliance on high tax rates”.

According to Thomsen, the IMF could work with the combination of reforms and debt relief on which Greece and its European partners can agree: no matter how big the pension reform, unless there is a debt relief involved, Greece’s debt will not be sustainable, while unless there are more pension spending cuts, no matter how much we agree on the debt relief amount, the pension system will not be sustainable he underlined. “We have yet to see a credible plan for how Greece will reach the very ambitious medium-term surplus target that is key to the government’s plans for restoring debt sustainability. This emphasis on credibility is crucial for generating the investor confidence that is critical to Greece’s revival. A plan built on over-optimistic assumptions will soon cause Grexit fears to resurface once again and stifle the investment climate,” Thomsen concluded.

Commenting on Poul Thomsen’s article, Theodore Pelagidis, professor of economics at the University of Piraeus, notes in Brooking’s Up Front blog (IMF and the new Greek restructuring program, 25.2.2016) that the real economy in Greece is collapsing and suggests that what the country needs is a new reconstructive (true reform) program. He questions the IMF’s stand on both Greek pension reforms of 2010 and 2012,   emphasizes the need to reform the tax system by broadening the tax base and not by extra taxation for high incomes, and advises against debt relief in exchange for pension reform: “Debt relief might be a nice incentive to convince a government desperate to share good news with voters, but I haven’t seen a single study with robust evidence on the unsustainability of Greek debt. What I know is Greece enjoys deferred loans, very long maturities (18 years, on average) and very low interest rates (around 2 percent). So, better to help the government get the economy back on track and then debt will be much more easily serviced than anyone now believes.”

Another critical note comes from Social Europe’s Daniel Munevar (Poul Thomsen, Greece And IMF Cynicism, 16.2.2016) arguing that from the start (2010), both Thomsen and the IMF were aware that Greece was being granted a loan it couldn’t be expected to pay back, while the delayed debt relief provided to Greece (2012) came precisely at the expense of the pension system of the country:

“[Back in 2010] Thomsen had no problem in supporting a program that, as a former IMF Executive Director has pointed out, pooled IMF and European resources to save French and German banks with significant exposure to Greece… Since 2010, the Fund’s official position has been that debt sustainability in Greece could be ensured as long as the government achieved the program’s fiscal targets, regardless of how realistic these were. The first time that the IMF publicly acknowledged the problems with the adjustment program came as a result of the leak, on July 3 2015, of a debt sustainability analysis prepared by the organization itself. In it, the IMF conceded the over-optimistic nature of the assumptions used in previous assessments and pointed out that debt sustainability in Greece could only be achieved through further relief.”