Greece's Economy to Return to Growth this Year, OECD Says 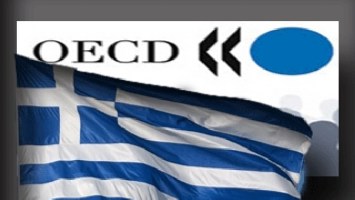 The Organization for Economic Co-operation and Development (OECD) has predicted that the Greek economy will recover in the second half of 2016 and expects approximately a 1.9% growth rate for 2017.

Specifically, according to OECD’s latest economic forecast for Greece (Economic Outlook June 2016), a return to growth will come after a deep and prolonged recession in Greece, as recovering confidence boosts investment and consumption and improved competitiveness raises exports. However, the Organization points out that the huge public debt burden is undermining investment and confidence, making some form of additional debt relief crucial.

Unemployment in the country is still very high, which is causing serious social problems, but is now gradually receding. According to the report, unemployment is expected to fall to 24% of the workforce this year (from 24.9% in 2015 and 26.5% in 2014) and 23.2% in 2017. At the same time, OECD stressed the need for modernization of the Employment Organization and expanding active policies in the labor market. The report also mentions that weak productivity accounts for much of the decline in output since the onset of the crisis and suggests the full implementation of structural reforms, so as to boost productivity. Productivity growth will also be boosted by easing the regulatory burden and barriers to competition further, especially in network industries and protected professions: “More reforms are required for the economy to swing toward exports and new enterprises” the OECD report said. 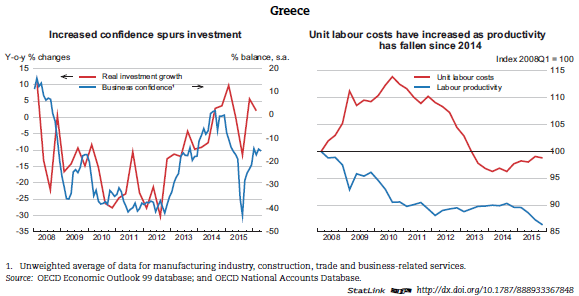 As for the pace of fiscal consolidation, it has slowed down but this is appropriate given the need for growth and rising fiscal pressures, including from the refugee crisis. OECD said that Greece recorded a primary fiscal surplus of 0.7 pct of GDP in 2015, from a budget target for a deficit of 0.25 pct of GDP, and projects a decline in the fiscal deficit to 1.9 pct of GDP this year and to 0.3 pct of GDP in 2017 from 7.3 pct in 2013. The implementation of policies such as the Guaranteed Minimum Income and school meal and housing programmes will reduce poverty and inequality, which rose sharply during the crisis. Fighting tax evasion would increase fairness and raise the revenues needed to deal with social problems, while dealing with the large stock of non-performing loans in banks is a priority to restore the availability of credit for investment.