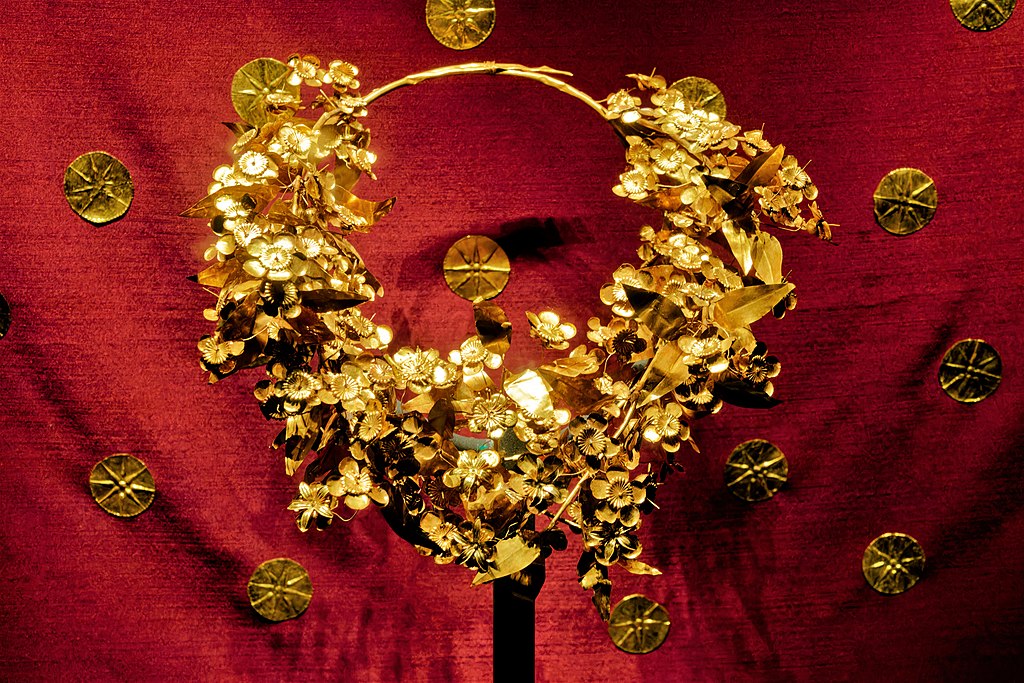 The ruins of the city of Aigai, the first capital of the Macedonian kingdom, were discovered near Vergina in northern Greece in the 19th century. The most important finds at the site are the royal palace and the extensive necropolis, where the tomb of King Philip II is believed to be. The archaeological Site of Aigai was inscribed on the UNESCO World Heritage List in 1996.

Aigai (often also transliterated as Aegae) was the original capital of the ancient Kingdom of Macedonia, from its establishment in the early 7th century BC until the seat of government was transferred to Pella around the start of the 4th century BC. The area had been inhabited since the 3rd millennium BC, and densely populated since the 11th century, mainly by livestock farmers in loose settlements, as is evidenced by the numerous finds from this period; hence its name, which means the "land of many goats".

According to myth, Perdiccas I, a Dorian Greek originating from Argos in the Peloponnese, who ascended to the throne of Macedonia, effectively founding the kingdom, was also the founder of Aigai as the capital. Perdiccas was the progenitor of the Argead dynasty (the royal house of Macedonia), also known as the Temenid dynasty, taking its name from the (possibly mythical) Temenos, King of Argos, ancestor of Perdiccas I, and himself purportedly a direct descendant of the hero Heracles (Hercules). 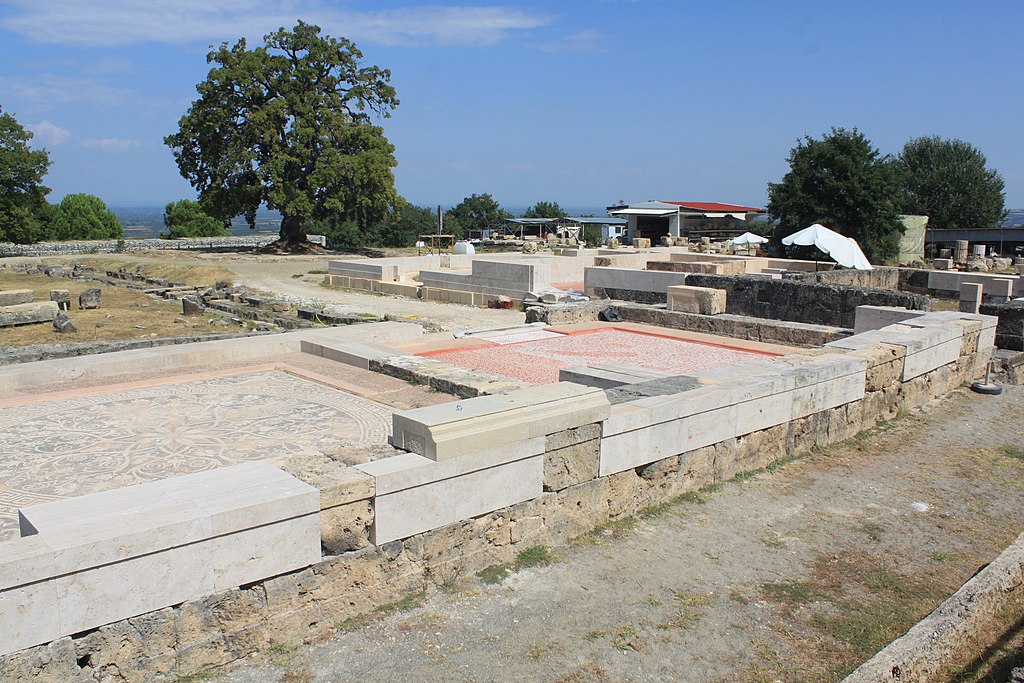 The city reached its heyday during the 6th and 5th centuries, becoming Macedonia’s most important city, with its inhabitants enjoying a luxurious and sophisticated lifestyle, as attested by the ornate utensils, jewels and arms dating to this period. Masonry, goldsmithing and trade flourished, while Aigai also attracted many important artists and thinkers of the time, among which Euripides, who presented his last tragedies there.

Even following the capital's relocation to Pella, the city of Aigai retained its great religious and ceremonial status and remained the burial site for most of the Macedonian kings, especially during the reign of Philip II and his son Alexander the Great. Philip would in fact be murdered there, during an extravagant celebration for his daughter’s wedding, held at the city’s theatre.

It wasn’t until the time of the Diadochi (Alexander’s rivaling successors) that Aigai’s glory came to an end; with Macedonia’s Roman conquer, the city was sacked and its walls and important landmarks destroyed. Although it remained inhabited, it was gradually deserted during the first centuries AD. 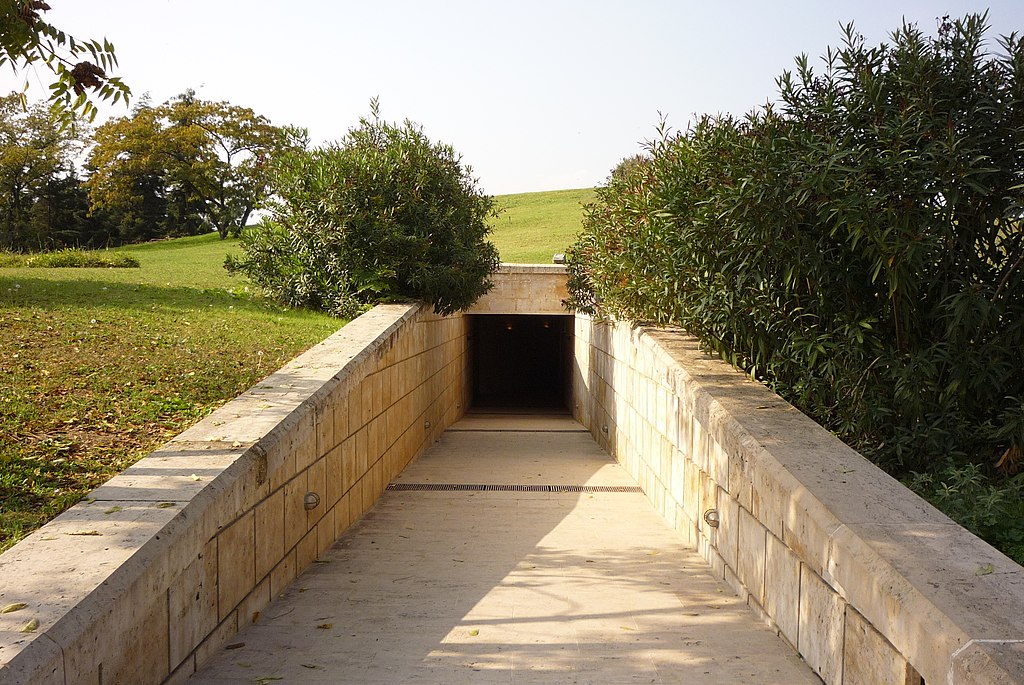 The small town of Vergina was founded in 1922 by Greek refugees coming from Asia Minor at the end of the Greco-Turkish War of 1919-1922. It is said to have been named after a mythical queen, following a suggestion by the Metropolitan bishop of the nearby city of Veria. It site largely coincides with the location of the ancient Macedonian capital.

The first excavations at the site had already begun in 1861 (with the area still forming part of the Ottoman Empire) under the French archaeologist Léon Heuzey (who would also lead excavations at the site of Philippi), under the assumption that these were the ruins of the ancient city of Balla (still undiscovered); part of a palatial building was uncovered, but the excavations had to be paused. In 1937, with Macedonia now a part of Greece, excavations were resumed by the University of Thessaloniki; over the course of the following years, a large part of the palace and the rest of the city were uncovered.

Built at the time of Philip II of Macedon, father of Alexander the Great, the palace was a monumental building of two or perhaps three storeys, one of the largest and most important structures of Classical Greece. It was lavishly decorated, with its walls covered by impressive frescoes and floors with intricate mosaics, and had at it centre a large square peristyle (i.e. a courtyard enclosed by a colonnade) decorated with elaborate friezes. 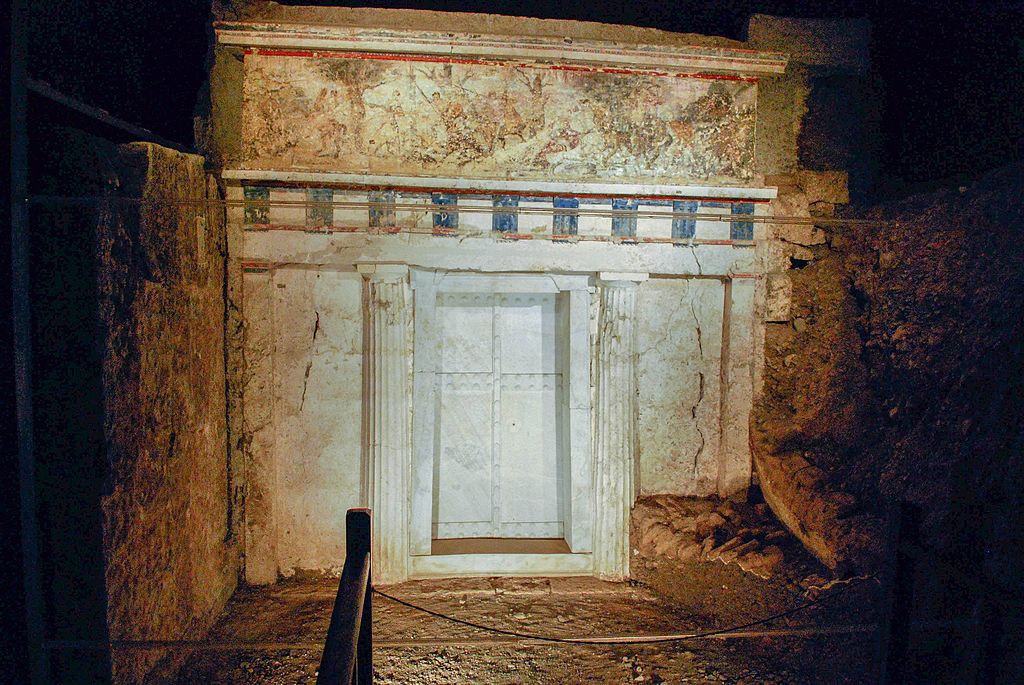 The first to suggest that the ancient site discovered in the vicinity of Vergina was in fact that of Aigai was British historian and classicist N. G. L. Hammond, a leading expert on the history of ancient Macedonia. But it wasn’t until 1977 that the site was definitively identified as the original Macedonian capital.

That year, Professor Manolis Andronikos, (who had already taken part in the previous excavations uncovering the palace and other parts of the city) lead the excavation of a hill in the area, known as the "Great Tumba" – a word which can mean both a hillock and a tump/tumulus and the following year he discovered the most impressive finds of Vergina: a burial cluster encompassing four tombs, of which two were undisturbed and contained grave goods of immense historical importance and artistic value.

The study of this material indicated that the largest of the tombs was the burial place of Philip II, who was murdered in the city in 336 BC; although this interpretation has been occasionally challenged by some archaeologists, a series of later studies, including morphological and osteological ones, have consistently confirmed the identity of the cremains. 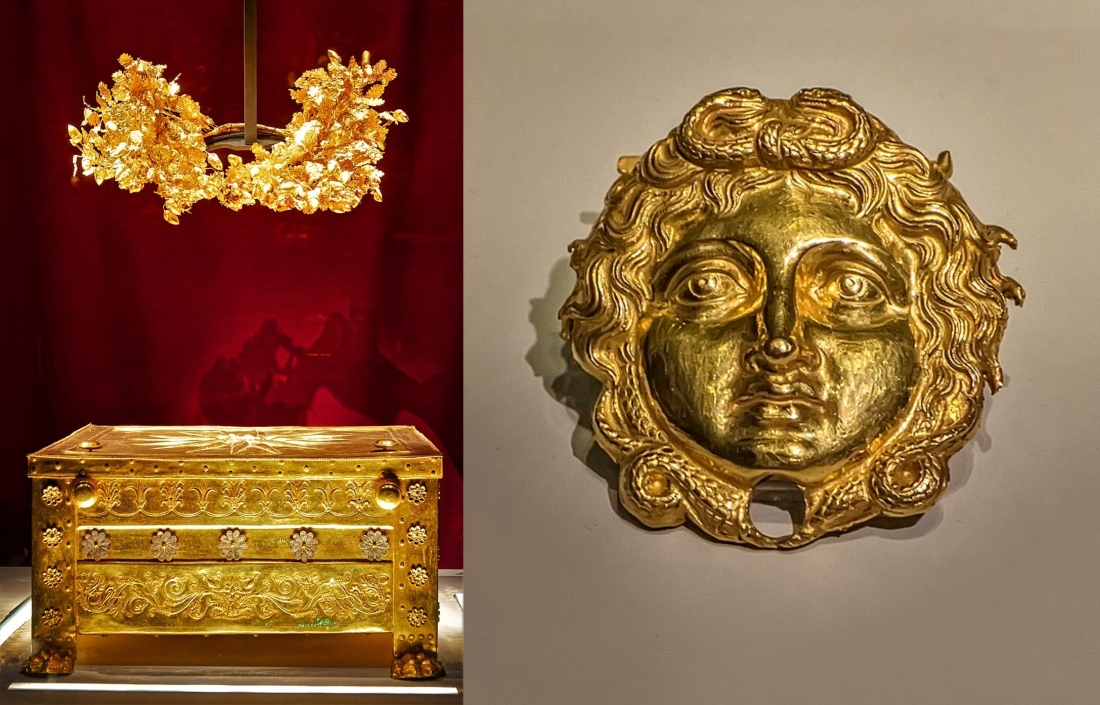 Inside the "Great Tumba", in what is known as "Tomb II", King Philip’s ashes were found in an ornate larnax (chest) made of solid gold and bearing a motif –hence known as the "Vergina sun"– which also contained a golden wreath of 313 oak leaves and 68 acorns. The golden chest was placed in a larger one made of marble. Other findings include a silver and gold diadem with Heracles knot, a gold-plated armour and greaves, weapons, ivory reliefs, jewellery, silver and bronze vessels.

Tomb II was unlooted and consisted of two rooms; in its antechamber of they discovered the remains of a woman who is believed to have been one of Philip’s wives –probably Meda, who was of Thracian origin– who sacrificed herself to accompany him to the grave, in accordance with the local custom.

An earlier cist grave, which is referred to as Tomb I, stands next to that of Philipp II, and is believed to have been the burial place of his wife Nicesipolis (mother of queen Thessalonike, after whom the eponymous city was named), who died several years before her husband. This grave had been plundered, but features an impressive fresco depicting the Abduction of Persephone by Hades. 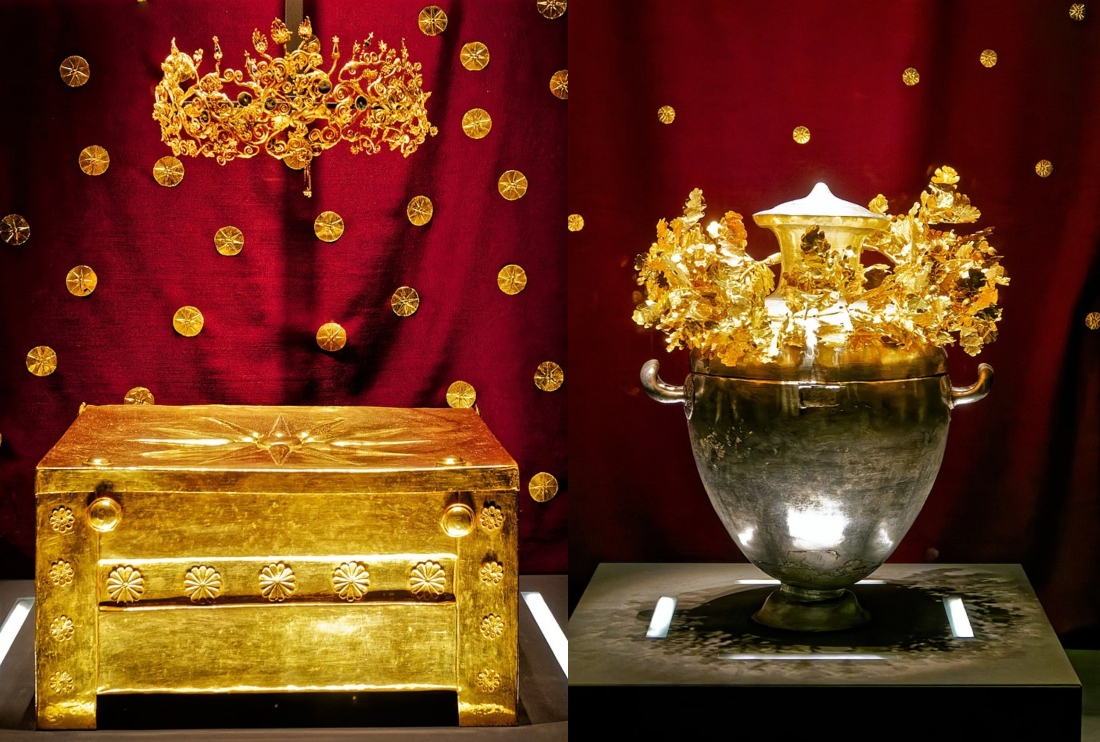 "Tomb III" was discovered in 1978; close to that of Philip II, it was also undisturbed and consisted of two chambers, although slightly smaller than those of "Tomb II". It is believed to be the grave of Philip’s grandson, son of Alexander the Great with his wife Roxanna, Alexander IV of Macedon: born after his father’s death, the young heir ruled as king under the regency of some of his father’s generals, and was eventually assassinated by his last regent, Cassander, before coming of age. His cremains were found in a silver hydria, on which rested a golden oak wreath; a frieze depicting a chariot race decorated the walls.

Finally, "Tomb IV" was discovered in 1980, but had unfortunately also been looted, leaving behind few finds. It is suggested that was the final resting place of Antigonus II Gonatas, who ruled as King of Macedonia for many years in the mid-3rd century BC. It is believed that the "Great Tumba" was created, probably during the lifetime of Antigonus himself, to protect these important tombs from further looting, after some of them had been sacked by adversary troops.

The museum housing all the finds from the royal graves is today built inside the tumulus, conserving the tombs in situ, equipped with all the technology to maintain the levels of temperature and humidity necessary to preserve the frescoes and other finds.

Although King Philip’s burial cluster is the most illustrious monument from the necropolis of Aigai, it is far from the only one. The "Cemetery of the Tumuli", the core of the archaeological site, contains over 500 tumuli, with the earliest of them dating to the 11th century BC; the Archaic necropolis, contains pit graves dating from the early 6th until the early 5th century BC, while there is another extension of the necropolis dating to the Classical period (5th-4th centuries BC). Graves from the Hellenistic era are also found dispersed in various parts of the necropolis.

In 1987, the "Cluster of the Queens" was discovered, consisting of four large pits and three monumental stone-built cist graves; of these, only one pit grave was intact, dubbed the tomb of the "Lady of Aigai", an important queen of the early 5th century BC, and contained a number of precious mobile grave goods; another one, believed to belong to Queen Eurydice, mother of Philip II, was found looted but contained an ornate throne bearing intricate decorations.

Excavations at the site continue to this day, bringing new finds to light; in recent years, the "Cluster of the Temenids" was discovered, containing as many as 20 tombs, including pit graves, monumental cists and Macedonian tombs, dating from 570 to 300 BC, all of which had been looted. It has been suggested that the tombs, which bear wall paintings and contain mainly terracotta grave goods, belonged to one of Macedonia’s important royal houses.