Sericultural activities have a long tradition in Greece, with raw cocoon production and silk processing being familiar activities for hundreds of years. Soufli, situated 70 kilometers east of Alexandropouli (capital city of the Evros region), became part of the silk road in Byzantine times, as silk became the town’s main source of income up until the 1980s, when production dropped significantly on account of the invention of synthetic silk, automated production and competitive Chinese silk. Nevertheless, silk production is being revived lately as fashion designers from both Greece and the world rediscover its fine quality and unique texture.

The story begins around 554 AD when two monks returning from China brought back with them ‘silk tree’ seeds, on whose leaves silkworms feed. The first town in the western world to receive this unique seed was Soufli, then part of the Byzantine Empire. And so began a long story of silk tree growing, silkworm breeding and silk textile production. By the end of the 19th century, the combination of expertise and production modernization, turned Soufli into the silk capital of the Balkans and its unique textiles began travelling to European markets. The architecture of the town still mirrors the local silk economy through the “koukoulospita” – high-ceiling houses whose upper floors once housed silk worms and their cocoons.

Soufli is the only city in Greece and Europe to be involved with silkworm rearing and processing of yarn directly taken from the cocoon. The uniqueness of its silk products stems in part from the fact that silkworms in Soufli have always been feeding on sycamore tree leaves, a feat made possible by the area's special climate. Soufli silk textiles, such as soie savage, crepe satin and cocoon-silk, are unique in glow and texture. This fact combined with the European monopoly gives a great perspective on the region.

Indeed the increasing demand within the European countries for natural and biological products and the increased silk products consumption has given a significant boost to the Greek sericulture, even amid the economic crisis. Both silkworm rearing and mulberry cultivation are EU funded, while silk reeling and processing industry can also be subsidized within the national development programs. These facts, combined to the huge quantities of silk products which are imported, explain the increasing interest which is observed among Greek farmers to get involved or increase their cocoon production and apply modern technology. 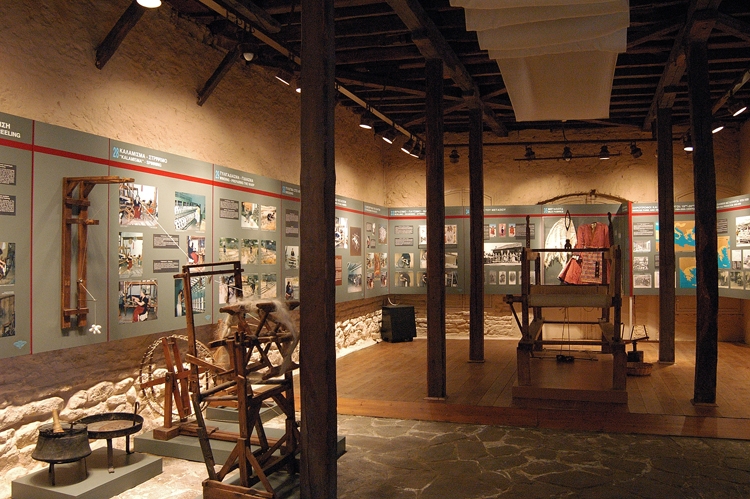 About 200 individuals are employed in the local industry nowadays, ranging from sericulture to selling silk products at stores as well as artisans working on embroideries at home. Silk remains a key player in the world of fashion accessories and local silk producers have profited immensely from their collaboration with Greek brands and designers, such as Zeus+Dione, Eireen and Orsalia Parthenis to name a few.

Soufli is showing off its silk in several exhibitions and museums. The older Silk Museum was set up in 1990. The purpose of the permanent exhibition housed on the ground floor of the Kourtidis Mansion is to show the pre-industrial techniques by which silkworms were bred (sericulture) and silk was woven. It also deals with the socio-economic significance of these activities for Soufli and the surrounding area.

A more recent addition is the Art of Silk Museum which belongs to the Tsiakiris Family Silkmills. In operation since 2008, it displays the full sequence of sericulture (with live silkworms on show most of the year). It shows the more industrial side of silk manufacture and weaving incorporating fully functional machinery and exhibits from the Tsiakiri factory and videos of the various stages and methods of production.