Archaeologists digging in the area of the Faliron Delta, a coastal area in southern Athens which served as a port for Athens in classical age, have discovered an ancient mass grave containing 80 shackled skeletons, Curator for Archeological Findings for Western Attica, Piraeus and the Islands, Stella Chryssoulaki, announced on April 13. 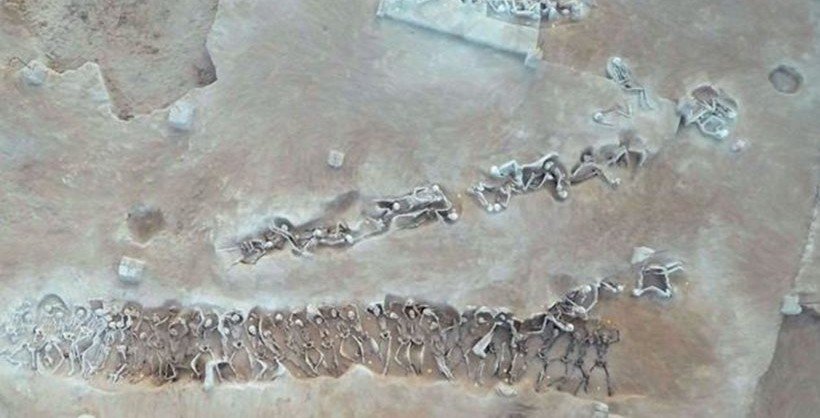 The “polyandreion” - collective burial for men who fell together - came to light in the last 20 days and it has been only half a meter below the surface. The skeletons were found lined up, some on their backs and others on their stomachs. A total of 36 had their hands bound with iron. One of the men, the last one to be found in March, also had his legs tied with rope. 50% of the skeletons have been microscopically examined and found to belong to “healthy, well-fed men” and “without fractures” on the first sight.

The find belongs to the Faliron necropolis, which has been partially and occasionally excavated since 1911. Funded by the Stavros Niarchos Foundation, the rescue excavations conducted by the Archaeological Service since 2012 have proved that the Faliron necropolis is extremely extensive and dates to the period from mid-8th to the 4th century BC.

The findings can be safely dated from between 675 and 650 BC, 'a period of great political turmoil in the region', the ministry said. Around this date, there begins the time of Cylon of Athens, a noble Athenian who has been associated with a dramatic chapter in the story of ancient Athens and the first reliably dated event in Athenian history, the “Cylonian Affair”, a failed coup d’ etat against the ruler of Athens. Cylon, a former Olympic champion, sought to rule Athens as a tyrant but Athenians opposed the coup attempt. The city’s chief archon, Megacles, had Cylon’s supporters massacred in the Temple of Athena, where they sought refuge — an act condemned as sacrilegious. It is highly likely that the 80 “prisoners of Faliron” were these men killed at the time and buried in Faliron.

Half of the site has been excavated so far. Chrysoulaki said the findings have a huge historical significance and require a close cooperation between the State and the Niarchos Foundation, which is funding the excavation, to best present and conserve the site. Archaeologists promised that the excavation will continue, while the culture ministry will implement a decision to build a small museum at the site.