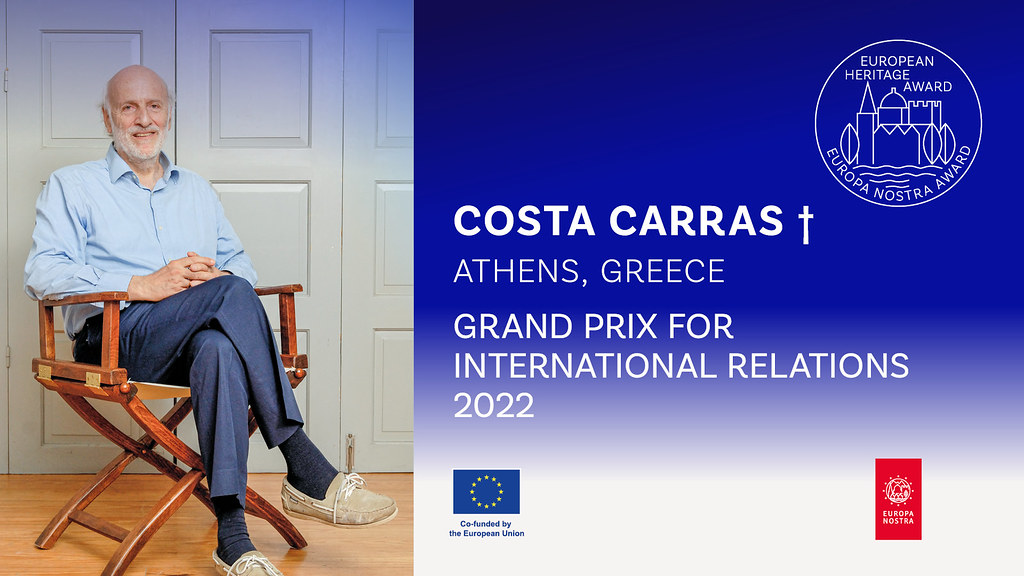 Trailblazing environmentalist Costa Carras, who passed away on 28 February 2022, was posthumously granted the Grand Prix for International Relations awarded at the 2022 European Heritage Awards / Europa Nostra Awards. Carras was the founder of the Society for the Environment and Cultural Heritage (ELLET) and the Vice-President of the Europa Nostra federation.

A "visionary conservationist, eminent historian and true European leader who connected and inspired people across the world through heritage", Carras was honoured for his tireless efforts in favour of Greece’s and Europe’s cultural and natural heritage to create a more sustainable, inclusive and beautiful world for present and future generations".

The ceremony for the 2022 European Heritage Awards / Europa Nostra Awards, Europe’s top honour in the field, was held on 26 September at the State Opera of Prague, in the presence of Mariya Gabriel, European Commissioner for Innovation, Research, Culture, Education and Youth, Hermann Parzinger, Executive President of Europa Nostra, and Ondřej Chrást, Deputy Minister of Culture of the Czech Republic, on behalf of Minister Martin Baxa.

The Awards, launched in 2002 by the European Commission, are run by Europa Nostra, the federation of European conservation organisations. The latest ceremony was the highlight of the European Cultural Heritage Summit 2022, which took place in Prague on 25-27 September, as part of the official programme of the Czech Presidency of the Council of the European Union; the event assembled about 600 heritage professionals, volunteers, lovers and supporters from across Europe.

The high representatives from the European Commission and Europa Nostra proudly announced the five Grand Prix laureates and the Public Choice Award winner. These top winners were selected from among this year’s 30 outstanding heritage achievements from 18 European countries (among which was also included the high-quality restoration project of an impressive Roman mausoleum later converted into a Byzantine church, in Episkopi, on the Greek island of Sikinos). 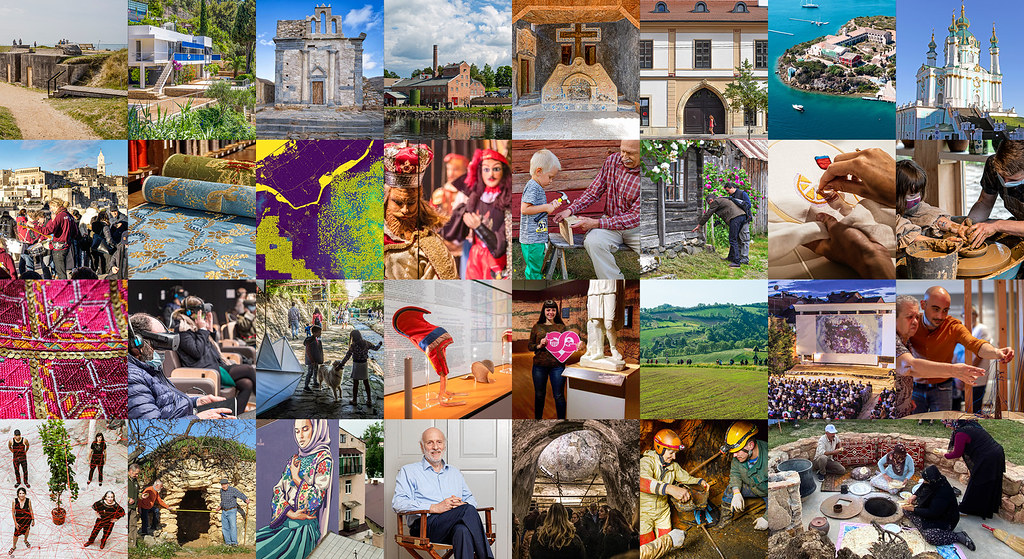 The 2022 Grand Prix laureates, chosen by the Board of Europa Nostra on recommendation by an independent jury of experts, are the following:

Grand Prix laureate for Social Cohesion and Well-being: Rivers of Sofia (Bulgaria), an initiative that made the artificial river beds of Sofia publicly accessible spaces.

The 2022 Public Choice Award went to the initiative World Vyshyvanka Day, Ukraine, an annual holiday celebrated internationally that helps preserve the traditional Ukrainian embroidered shirt as an important element of the heritage of the Ukrainian people. 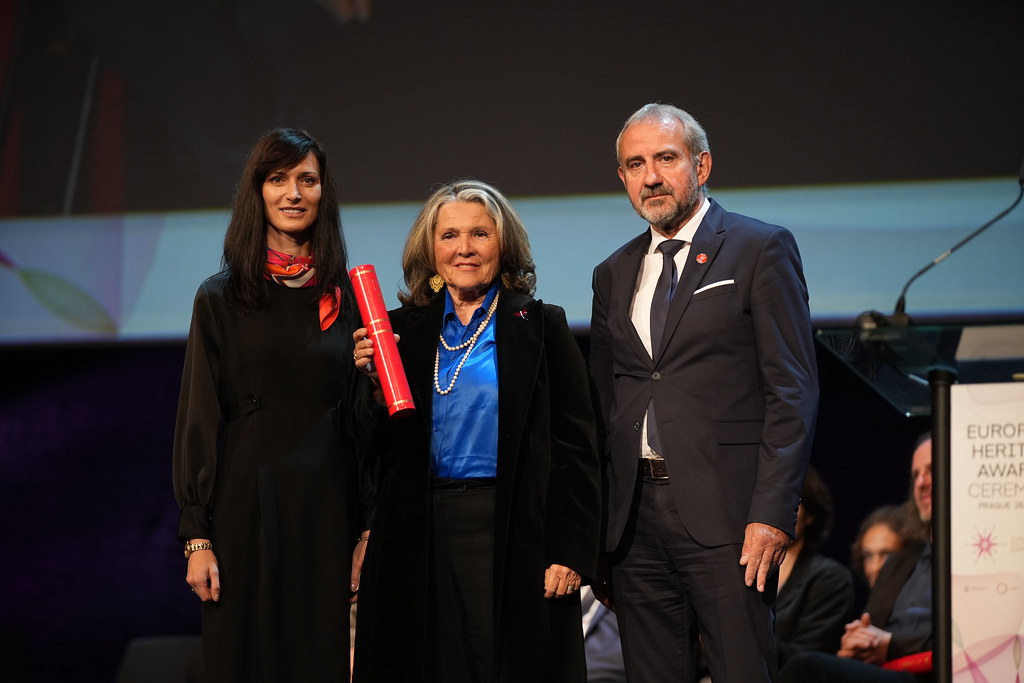 Lydia Carras, the widow of Costa Carras, accepted the award on his behalf, while Athens Mayor Kostas Bakoyannis was also present at the ceremony; Lydia Carras is the co-founder (together with her late husband) of the Society for the Environment and Cultural Heritage, of which she has served as President since 2017. She is a Council member of Europa Nostra, representing Greece, and was granted a European Heritage Award in 2019 as the founder of the "Greek Paths of Culture" Programme; she works as a curator and documentary director, and has been honoured by the Academy of Athens award for her life΄s work in the fields of cultural heritage and environment conservation.

Costa Carras was born in London in 1938, to a prominent Anglo-Greek shipping family. He studied Ancient Greek and Latin Literature, followed by Philosophy and Ancient History at Oxford and Economics at Harvard. He worked for many years in shipping in London and served for nine years on the Board of the Union of Greek Shipowners.

In 1972, he co-founded ELLINIKI ETAIRIA – Society for the Environment and Cultural Heritage(ELLET) together with his wife Lydia, and served as President on 1972-1975 and 2001-2008; ELLET went on to become Greece's leading environmental organisation. From 1973 until his death Carras represented ELLET in Europa Nostra, of which he was also the longest-serving Vice-President (sine 1976).

Europa Nostra’s video on Costa Carras for the award ceremony

Costa Carras was also a founding member of Friends of Cyprus, a London-based organisation committed to the withdrawal of occupying forces from Cyprus and to intercommunal rapprochement between Greek and Turkish Cypriots; he was also a founding member of the Centre for Democracy and Reconciliation in Southeast Europe based in Thessaloniki (1995-2018), responsible for the Joint History Project which brought together academics working for improved history teaching and produced six working books for the benefit of history teachers in schools throughout the region.

Costa Carras was co-chairman of the British Council of Churches’ Commission on Trinitarian Doctrine in the 1980s and organised the ground-breaking 1988 meeting on religion and the environment in Patmos as a lay Archon of the Ecumenical Patriarchate.

He has been hailed as an "ecumenical Greek" and, above all, a "true pioneer in environmentalism", advocating for the concept of sustainable development through the conservation of cultural and natural heritage already in the 1970s, while he was also one of the first to talk about the concept of cultural landscapes.

In its eulogy for the late Costa Carras published on Europe Nostra’s website, he was characterised as an "iconic champion of Europe’s shared heritage and values", a "true and legendary hero of Europe’s heritage and nature preservation, a visionary leader, an eminent historian and scholar as well as a distinguished businessman, a humanist and an idealist, and a true European". As it was pointed out, under his guidance as Vice-President, Europa Nostra "built a truly pan-European heritage movement based on fundamental human rights and shared European values".

In recommending Carras for the Grand Prix in the category of International Relations, the awards’ Jury stated that he had a "profound and lasting impact on the heritage field in Europe, as well as on the process of peace and reconciliation in the wider region of South-East Europe", adding that his "forceful leadership and activism inspired whole generations of heritage professionals and volunteers", while his "strong determination combined with huge knowledge and wisdom" made him a role model for many, and especially for younger people.

Video by Europa Nostra honouring the legacy of Costa Carras

ELLET – Society for the Environment and Cultural Heritage

ELLINIKI ETAIRIA – Society for the Environment and Cultural Heritage (ELLET) was founded in 1972 by Costa and Lydia Carras, residents of London, as a reaction to the damage caused by the Greek junta (1967-1974) to both the natural and architectural heritage of the country.

In order to maintain financial independence it was requested from prominent businessmen of the Greek Diaspora to co-fund the venture. Its first campaign, which united many of the opponents of the junta, was to prevent the creation of an industrial zone in the southern Saronic Gulf, while major issues were the preservation of the old historical neighbourhood of Plaka in Athens and the protection of the Lake Prespa with the establishment of the local Biological Research Station.

Most importantly, the Society played a seminal part in drafting Article 24 of the Greek Constitution of 1975, which concerns the protection of the environment. Other important initiatives of ELLET include the establishment of the Marine Park of Alonissos, the protection of the Delphic landscape, the preservation of many byzantine churches and of historic settlements such as that of Hydra Island, but also of monuments beyond the country’s borders.

In order to provide support for ELLET, Costa Carras founded three sister organisations abroad: the Fondation pour la Sauvegarde du Patrimoine Grec in Switzerland, the National Trust for Greece in the UK and the Society of the Protection of the Greek Heritage (SPGH) in the USA; among the distinguished figures that served these organisations we find Steven Runciman and Robert Browning in the UK and Bernard Knox in the USA.

Europa Nostra is a pan-European federation of heritage NGOs. Based in Hague, it brings together over 250 member organisations and 150 associate organisations from over 40 countries, public bodies and private companies, creating a network of over 5 million people who care for Europe’s heritage. It is recognised as the largest and most representative heritage network in Europe, maintaining close relations with the European Union, the Council of Europe, UNESCO and other international bodies. 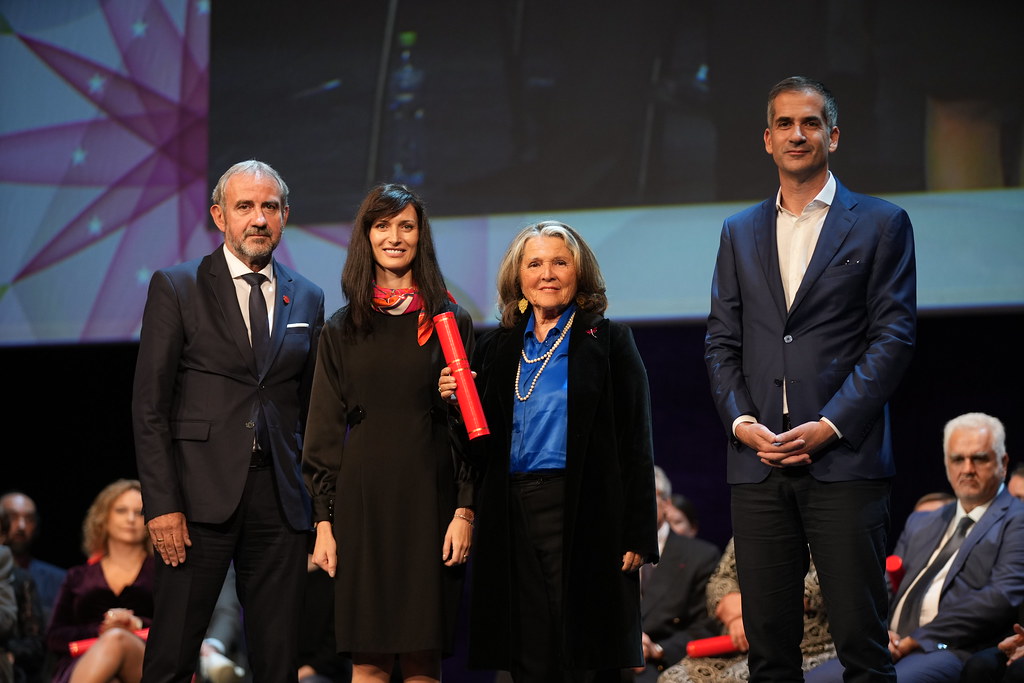 In the summer of 2022, Europa Nostra established a Heritage Hub in Athens – the result of its close cooperation with the Society for the Environment and Cultural Heritage (ELLET) and the Municipality of Athens. ELLET was selected by Europa Nostra for the coordination, management and #representation of the Hub in the wider region of South East Europe and the Eastern Mediterranean (with special focus on the Eastern Balkans).

The main areas of activity of Europa Nostra's Heritage Hub in Athens will include: highlighting the role of cities and local authorities in the preservation and promotion of cultural heritage –a thematic priority for the Municipality of Athens– and studying good practices of EU cities and regions; engaging young people in cultural heritage through awareness raising programmes; developing an "SOS for Endangered Heritage" programme, based on ELLET's long-standing experience in campaigning for the preservation of endangered cultural and natural heritage; extending ELLET's "Greek Paths of Culture" Programme to the countries covered by the Europa Nostra Heritage Centre in Athens.

Kostas Bakoyannis, Mayor of Athens, who was actively involved in the establishment of the Athens Heritage Hub, also delivered a special address at the European Heritage Policy Agora (27 September 2022), the closing event of the European Cultural Heritage Summit 2021, as part of the panel for "Cultural Heritage as a catalyst for peace and solidarity".

Read also via Greek News Agenda: National Marine Park of Alonissos, a gem of biodiversity; Green energy in Greece | The sustainable answer to climate and energy crisis; Climate change in the Mediterranean: two Greek research centers measure the air and explore the waters