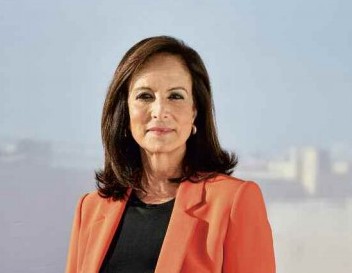 For the first time, Greece, a founding member of the OECD, has officially presented a candidacy for the position of the Organization’s next Secretary General, the former EU Commissioner and Greek Cabinet Minister, Ms. Anna Diamantopoulou.

“Anna Diamantopoulou has undeniable multifaceted scientific and public service credentials. Drawing from her global experience in such areas as Education, Employment, New Technologies and the Environment, she is an outstanding candidate for Secretary-General of the OECD,” Greek Prime Minister Kyriakos Mitsotakis underlined.

Since the announcement of her candidacy in early October, Ms. Diamantopoulou has been regarded as one of the strongest contenders for the post.

Anna Diamantopoulou is a Greek politician and public figure with a long and distinguished career in public service in Greece and Europe, including positions as European Commissioner – one of the youngest ever to become member of the College of Commissioners – for Employment, Social Affairs and Equal Opportunities, as well as Minister of Development, Competitiveness and Shipping and Minister of Education, Research and Technology and Lifelong Learning of the Hellenic Republic.

Education, research-innovation and technology, gender equality, social welfare, competition, development and industrial policy as well as international trade focused on the Merchant Marine, are among the issues she has dealt with at the policy front, along with the challenges and opportunities the 4th Industrial Revolution brings at national and global level. Policy sectors that lie at the epicenter of OECD’s mission. She has also in-depth experience in the private and non-profit sector.

She is currently the President of DIKTIO - Network for Reform in Greece and Europe, a leading nonpartisan, Athens based think tank with established partnerships in four continents, which she founded in 2013. She also serves as independent non-executive Director at Coca Cola HBC AG, an FTSE 100 company.

Her strategic vision for the OECD? In her own words, «not a “Christmas tree” of objectives and activities, but a well-balanced concrete plan of continuity and change aiming at combatting inequalities inside our countries (better policies for better lives), among our countries (Development), among generations (Environment and Sustainability), among sexes (Gender)».

OECD as a frontrunner for a more resilient world, this is, in a nutshell, Anna Diamantopoulou’s vision for the Organization, highlighting the necessity of creating a “Global Foresight Hub, which would collaborate with all kindred centers around the globe, disseminating knowledge, research, and projections related to future shocks, and providing “preparedness” policy tools”.

Ms. Diamantopoulou’s lifelong experience in policy making and management, comprising both a micro- and macro-economic focus to account for the varied levels of development in regions and countries with often widely divergent interests, together with her strong operational and communication skills, make her, undoubtedly, one of the most qualified candidates for OECD’s next Secretary General.

And probably the wisest choice.