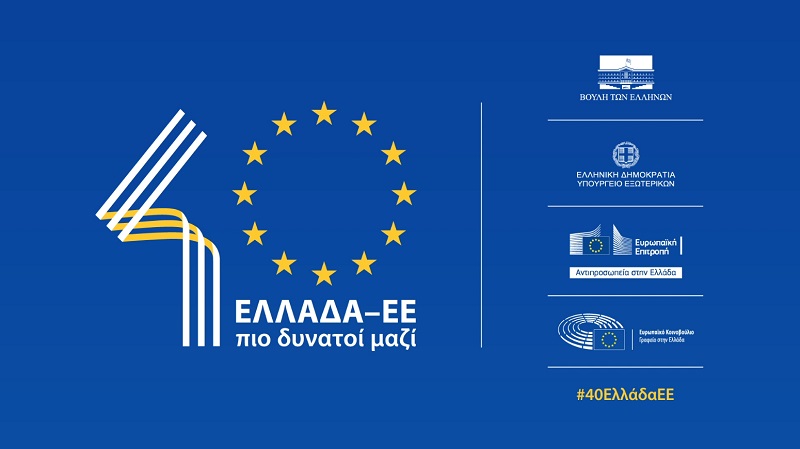 It has been forty years since Greece joined the European Union (EU) in 1981, named at the time European Economic Community. A series of activities has been scheduled to celebrate Greek membership to the EU throughout 2021 and this was announced last week in a joint event by the Hellenic Parliament, the Ministry of Foreign Affairs, the Representation of the European Commission in Greece and the European Parliament Office in Greece. The activities aim at underlining the importance of Greece’s accession to the EU family, while encouraging citizens to express their opinion about the Future of Europe.

From the Association Agreement to the Accession

The journey of Greece to the EU started in 1959 when the country applied for association with the newly established European Economic Community (EEC) leading to an Association Agreement between Greece and the EEC, signed in June 1961. The Agreement was suspended after the military coup in Greece in 1967 and it was re-activated only after the restoration of democracy in the country in 1974. Wishing to stabilize its political system and its democratic institutions as well as reinforce its economic development and strengthen its geopolitical position, Greece officially submitted its application for full accession to the EEC on June 12, 1975.

The Greek prime minister Konstantinos Karamanlis, who was firm advocate of the European Community project and Greece’s accession, succeeded in convincing the Heads of States and Governments of the nine member states at the time, to start the accession negotiations with no delay. Greece expressed its readiness to accept the entire body of Community legislation, the "Community acquis", and the accession negotiations concluded in May 1979, with the signing of the Treaty of Accession in Athens at Zappeion Megaron. The Accession took place two years later, on January 1, 1981. 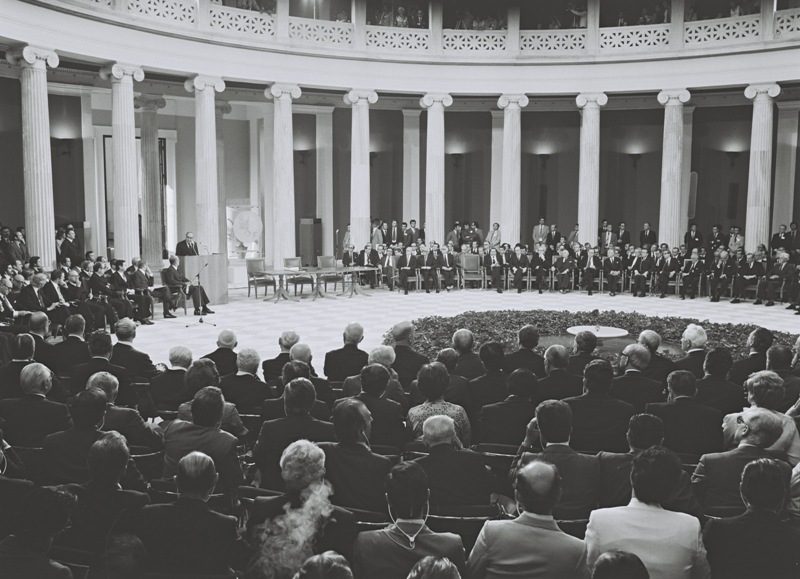 Greece’s request during the first years of its membership concerning further economic support in order to restructure its economy led to the Integrated Mediterranean Programs (IMPs) approved in 1985. The Programs also supported the Mediterranean regions of France and Italy in view of the forthcoming enlargement to include Spain and Portugal and led to one of the central policies of the EU, the Cohesion and Structural Policy. This Policy aims to reinforce economic, social, and territorial cohesion in the EU supporting the poorest regions of the Union.

Greece has also been part of major EU’s milestones such as the Single Market and the Single Currency established in the emblematic Treaty of Maastricht (1992), while it was among the first countries that adopted the euro in 2001. Having supported the development of joint policy in new areas such as education, health, and environment Greece was also in favor of the strengthening of supra-national institutions such as the European Commission and European Parliament opting for a stronger EU. 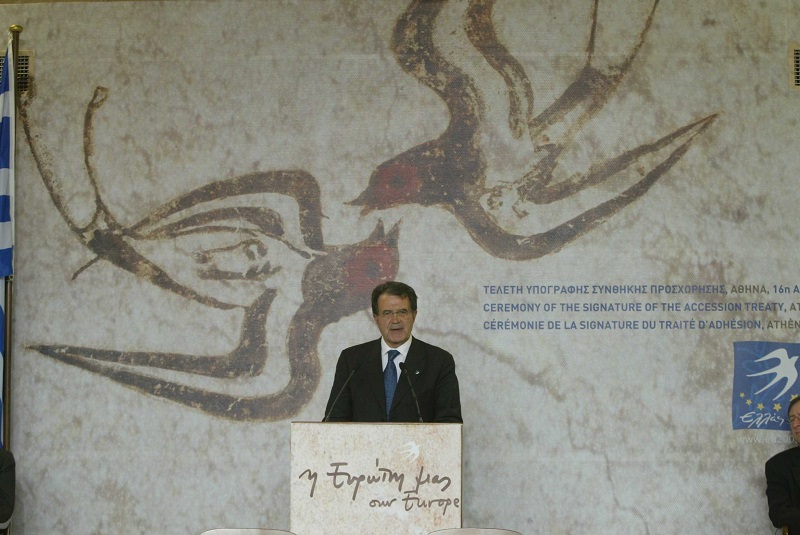 Signing Ceremony of the accession treaty of the New Member States of the EU at Stoa of Attalos (Acropolis), Romano Prodi, President of the EC, Athens, on 16/04/2003 (Source: EC - Audiovisual Service, European Communities, 2003)

EU membership has helped Greece modernize its state, ameliorate its infrastructures, strengthen its economy and accelerate social progress. It is not by accident that these last forty years have been for Greece an uninterrupted period of political stability, peace, democracy, and prosperity despite the recent economic crisis. In spite of their rising doubt about the EU in recent years, Greeks support the Union and Greek membership even asking for a greater role for institutions such as the European Parliament and for more solidarity within the EU concerning the economy, migration etc. According to a recent EU public opinion survey (Socio-demographic trendlines - EP Eurobarometer, Edition 7 - Feb 2021) Greeks in their majority (56%) think that “Greece’s membership to the EU is a good thing”, while a majority of 65% think that “Greece has on balance benefited from being a member of the EU”.

Greek Presidencies of the European Council

Greece has held the rotating Presidency of the Council of the EU five times until now, in 1983 when Greece proposed the establishment of regional financing to remove inequalities, in 1988, when the Greek Presidency took initiatives to discuss major issues relating to the future role of the Community including the promotion of new policy areas like the Unified Social Charter and social coherence in the Community, in 1994 when the Greek Presidency promoted the prospect of EU enlargement towards the south and east of Europe so as to ensure stability, development and collaboration in the region, in 2003 when the largest wave of enlargement in the history of the EU took place with the signing of 10 Accession Treaties at the foot of the Acropolis. Greece’s fifth Presidency in 2014 which took place amid severe economic crisis in the EU and rising public criticism, aimed at finding realistic solutions to hard issues such as the deepening of the Economic and Monetary Union, the support to growth and employment, the asylum, borders and migration management etc.

The Program of the Activities

The program of celebrations "Greece-EU: stronger together for 40 years” will include throughout 2021:

· A joint main event on the occasion of 9 May (Europe Day), focusing on the EU's contribution to modern Greece
· A regional dimension with events in all regions in order to stress the Union's tangible contribution to local communities (in cooperation with the Regions, the Europe Direct Information Centres, volunteers of the together.eu network and local media)
· Public discourse in the media and social media on assessing the impact of our membership
· Testimonies/interviews with the leading figures of our country’s membership in the EU on television networks and social media
· Collection and broadcasting of Greek citizens’ testimonies on the EU's footprint at their place of residence, in cooperation with European Information Centres, the network of European Parliament Ambassador Schools and the together.eu volunteer network (creation of an audiovisual library per area/region & utilisation at local events)
· Issuance of a postage stamp commemorating 1981-2021 - 40 years since the accession of Greece to the European Union.

From the illumination of the Hellenic Parliament building's façade with the logo of the 40-year anniversary (Source: Permanent Representation of the EC website)

40 years since the treaty of Athens | Archive exhibition on the European trajectory of Greece
Quo vadis Europa? | A Franco-Greek conversation about Europe and its future: two interviews following the “Days of Athens” forum
Think Tanks | Kevin Featherstone on LSE's Hellenic Observatory and the concept of 'union' in the EU
Quo Vadis Europa? | Nikos Mouzelis on the future of Capitalism and Europe
Quo Vadis Europa? I Karl-Heinz Lambertz: "Cohesion policy is the ultimate expression of European solidarity"