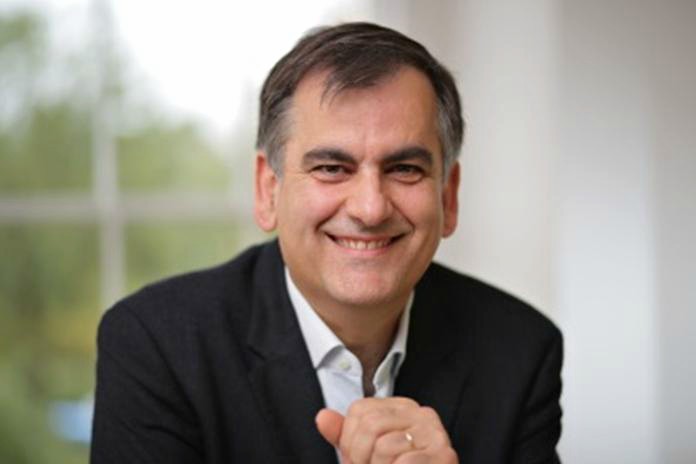 Yiorgos Mylonadis, Adjunct Professor of Strategy & Entrepreneurship at London Business School, is a Strategy expert who specialises on business ecosystems, digital strategy, entrepreneurial communities, social enterprises, and methodologies for strategic thinking. A native of Greece and the UK, he has held appointments on the faculties of the Wharton School of the University of Pennsylvania and the Athens Laboratory of Business Administration (ALBA) before joining LBS in 2000 where he created Developing Strategy for Value Creation - the School’s first Executive Education Strategy Programme. He has also led large, multi-year advisory and teaching programmes for many major firms.

Mylonadis has also served as an advisor to the Reload Greece (RG) founding team since 2012 and as a Trustee of the Reload Greece Foundation until May 2018. RG is a UK based organization aiming to showcase the productive and creative side of the country and, above all, bringing together top professionals, entrepreneurs, economists and investors from around the world to discover ways to harness the power of the Diaspora to an impact in Greece. One of their main programmes is the annual RG Conference, launched in 2012.

RG’s 5th Conference, rebranded RG Connect18, took place on 6 October 2018 in London, under the tagline “Inspire | Learn | Connect”, and focused on the theme “Where Challenges Meet Solvers”: how challenges caused by the recession can be overcome through a ‘solver’ approach. Yiorgos Mylonadis participated in the Conference, at a panel discussion titled “Greece Beyond the Programmes: Investment & Entrepreneurial Prospects”, together with George Chouliarakis, Alternate Minister of Finance and George Houpis, Chairman of RG’s Board of Trustees. On this occasion, the Press & Communications Office at the Embassy of Greece in London spoke with Mylonadis on Greece’s current entrepreneurial potential, the challenges faced and the role of the Greek Disaspora.

RELOAD GREECE recently organised in London a very successful conference titled RG Connect18: Where Challenges Meet Solvers. The aim of the event was to bring together a community of international entrepreneurs, investors, academics, students, policy makers and other key stakeholders to discuss and plan the next big steps in entrepreneurship. How have you collaborated with RELOAD GREECE for the realisation of this conference?

My involvement with Reload Greece started in 2012, when I helped the co-founders of what was then a spontaneous movement organise their first conference. We later joined forces with the founding team to transform the movement into an organisation. We continued to run conferences while we established a governance structure, assembled a Board of Trustees, and recruited the CEO, who, in turn, hired the operating team. Three years ago, I helped establish an advisory board to provide guidance to the CEO about the conference. With Reload firmly established, in May this year I stepped down as a Trustee to make room for new people to contribute to the growth of the organisation. I believe that Reload serves an important role in building a community of entrepreneurs amongst the Greeks of the diaspora. It has been an exhilarating 6 years! 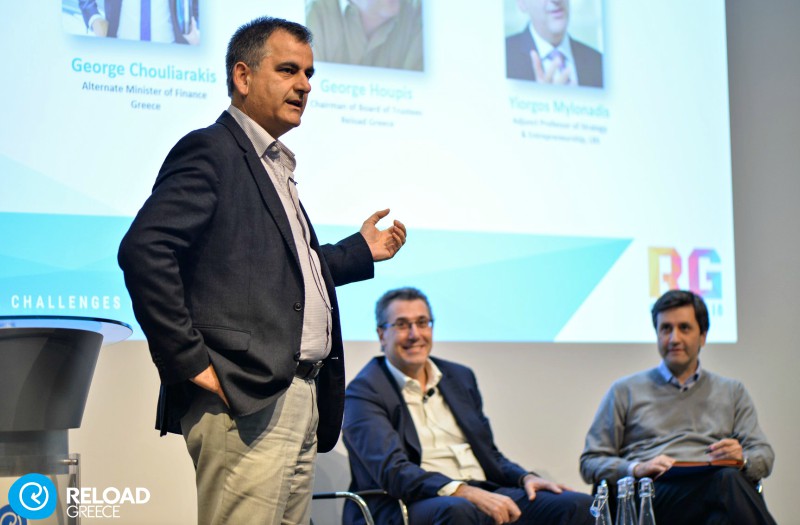 Interest in Greek entrepreneurship from the part of the Greek State, young people, society and other stakeholders has soared, especially after the financial crisis broke out in our country. Why do you think this was not the case before the crisis? Did it have to do with Greek legislation and red tape, with the structure and character of Greek businesses and economy, with the mentality of the Greek society, or with international factors (such as lower technological development).

It is important to remember that successful startups took root in Greece well before the crisis. However, any crisis forces people to question existing practices – such as the State-supported model of business – and look for new solutions. The inflow of JEREMIE funds catalyzed this search and led to the growth of a vibrant ecosystem around startup firms.

Is entrepreneurship the result of talent, mindset, ideas and intuition or is it the result of education, academic performance, hard work and patience? Can just anyone become a startupper or entrepreneur? Finally, among the young entrepreneurs who launch a new business, who are more likely to succeed?

Entrepreneurship starts with spotting a problem that needs a better solution than those currently available. It then proceeds with finding ways to accomplish more than is typically thought possible with the resources at hand. All the qualities you mention are useful but they do not guarantee success. Success in entrepreneurship involves copious amounts of trial and error or, as the saying goes, “you have to kiss many frogs to find a prince(ss)”. This requires a lot of persistence, often amidst adversity: diverse teams with the grit and willingness to seek out and use feedback, resolve conflicts, while also keeping the eye on the prize – which they need to clearly define.

It seems that Greek entrepreneurship has sprung out of the high youth unemployment rates in Greece. Some argue that because entrepreneurship is driven by necessity, the vast majority of new businesses are in the low risk and low innovation HORECA (hotels, restaurants, catering) sector. Would you agree with this perception?

Innovative businesses require more capital investment, which implies more risk. Greece did not use the opportunity of the crisis to reduce the very high levels of institutional uncertainty in the key areas of education, tax regulation, and justice. In addition, HORECA requires a physical presence in Greece while other types of business are more mobile and can be attracted to countries with more favourable institutional environment.

Entrepreneurship has to do with detecting, recognising and discovering opportunities in the environment for which someone creates a solution, or with creating a need they can afterwards fulfills. What new needs/opportunities would you think the crisis has created that Greek startups could build on? How successful are young Greek people in detecting and exploiting these opportunities?

Greece needs to focus its entrepreneurial energies in solutions that can be scaled to global levels. This requires both entrepreneurs and Venture Capitalists to adopt a global mindset and to up their game. The company Beat provides a good example. It started at about the same time as Uber aiming to solve a global problem. However, its limited funding curtailed its growth prospects. It was bought out for 40m Euro while Uber is planning for this year an IPO in the $100B range. This is not to downplay the great achievement of Beat but to illustrate the extent of the challenge Greek startups will have to manage in order to become global players. 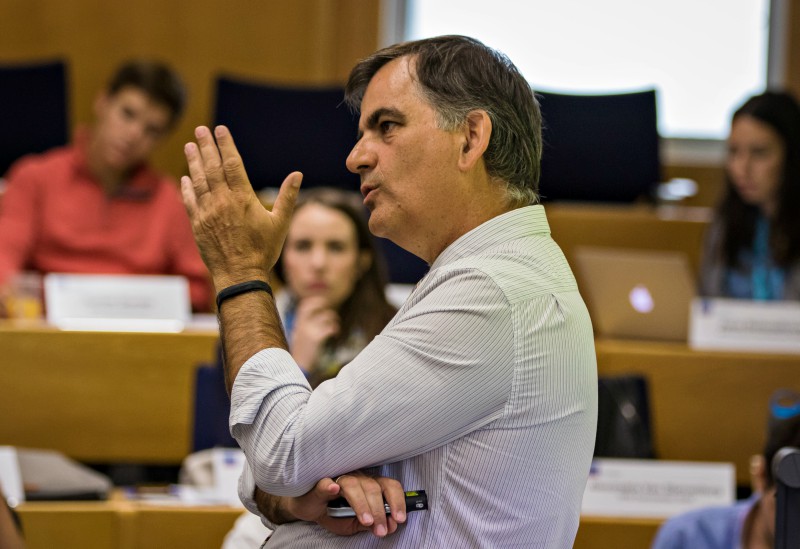 Universities undoubtedly play a great role in promoting entrepreneurial ideas. However, Greek Universities are often not very well networked with institutions and big companies abroad to promote students’ innovative ideas, especially in technology. Suppose a Greek startup has a new innovative algorithm similar to Google’s. How is the startup supposed to gain recognition? How can this be tackled?

The short answer is, apply to join RG Challenge - Reload Greece’s accelerator programme. However, your point about Greek Universities is spot-on. Entrepreneurial companies live and thrive within vibrant ecosystems. Large businesses and Universities are key to these ecosystems. The areas around Cambridge University in the UK, Stanford in the USA, or the city of Basel with its pharmaceutical companies are good examples. Greek Universities are hampered by their antiquated governance. This makes them to be inward-looking and to lose sight of the international competition. In the area of technology, recent examples are Imperial College’s White City campus and MIT’s newly established $1B College of Computing. Would Greek Universities even consider these institutions as competitors? Probably not but, then, the competition between a Greek startup and one located in London or Cambridge, MA looks truly unequal!

What would you say is the prevailing profile/features of a young Greek start upper/entrepreneur in Greece and abroad? Are there differences?

A startupper in Greece who has been “trained” in the difficult regulatory and, recently, social and economic environment of Greece has the benefit of being agile and resilient. On the other hand, they are likely to be less exposed to global needs and markets and lack skills for partnering or selling to large corporates. Fortunately, the Greek diaspora is very well rooted in major markets and could provide a good way of addressing these deficiencies.

Greece has been experiencing for the last years a severe Brain Drain. How would you think this could be reversed?

It will be reversed when Greece realises that it is competing in an international arena for talent. It would then seek to compare its performance to that of its competitors and set targets for improvement. For example, in 9 years since the start of the crisis, Greece has yet to establish a target for improving its standing on widely used indices for competitiveness, ease of doing business, corruption, social justice, etc. These targets need to have wide acceptance by Greek society, including a wide spectrum of political parties.

Do you think that Greek society can ever overcome the instinctive fear of open markets to become a business-oriented society or will public sector employment remain the preferred professional option for Greek families and young Greeks?

It is certainly feasible. Israel has many characteristics similar to Greece and – as hard as it is to believe this today – until relatively recently “entrepreneurship” was considered a dirty word in what is now an entrepreneurial hothouse. However, bad habits are hard to die. It will take an amazing success story or two together with a determined effort from the Greek institutions to set establish new role models for today’s youth. We need our Richard Branson and our Steve Jobs. The recent influx of the Equifund capital, if used to establish globally competitive Greek startups, could provide a boost in that direction.

On the whole, do you believe that the crisis has assisted in spurring youth entrepreneurship? Would you think that Greece is currently ideal for innovation to grow? Taking into consideration the existing conditions, what steps and in what order should a young aspiring entrepreneur who wants to start something of his/her own take?

A young aspiring entrepreneur should hook up with a community of like-minded people, such as Reload Greece or the multitude of high quality similar organisations in Greece. In such a fertile environment, they can recruit people to work on their idea or join forces with others who they find inspiring. At best, they will have the time of their life. At worst, they will extract lessons that they can use in their next endeavor. So, go on and try it!