Quo Vadis Europa? | Filippa Chatzistavrou on the perils of differentiated integration for the European project 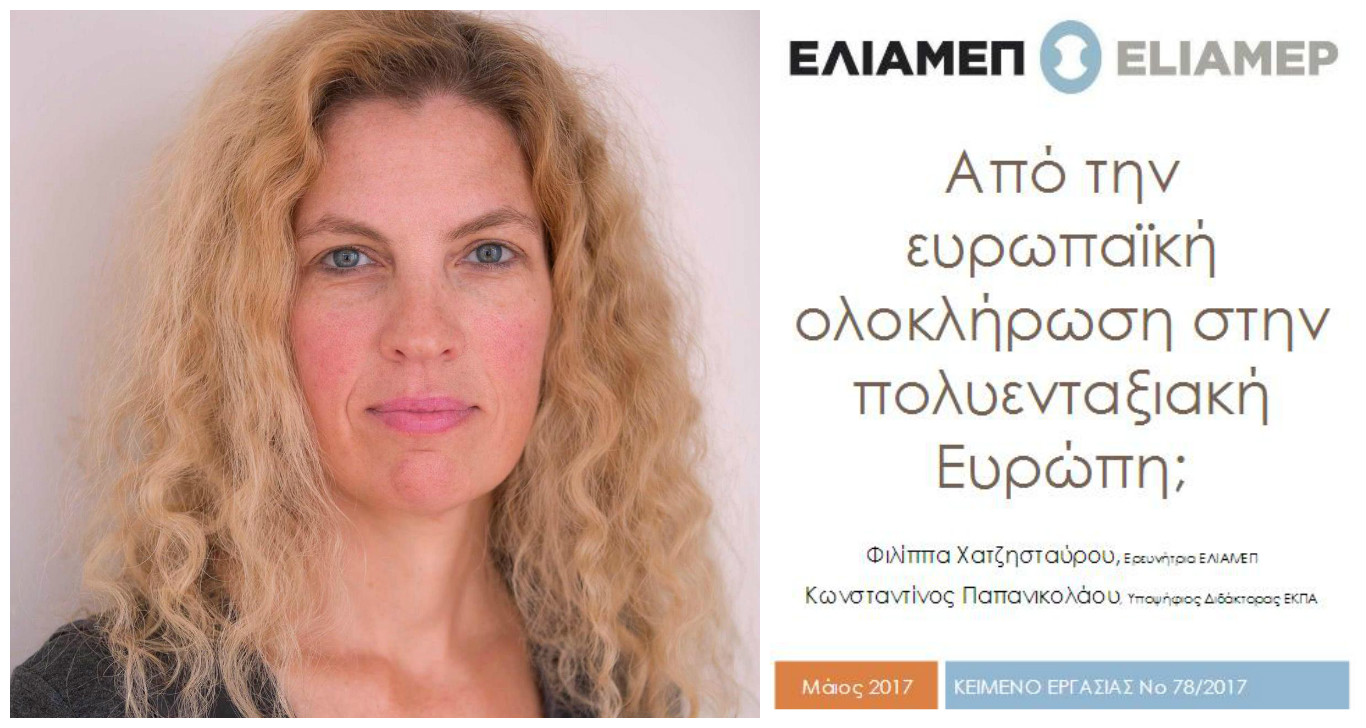 Filippa Chatzistavrou is research fellow at Hellenic Foundation for European and Foreign Policy (ELIAMEP), adjunct lecturer in the Department of Political Science and Public Administration of the University of Athens and research associate in the Institute of European Integration and Policy of the University of Athens. She has previously taught at the University including Paris VII Denis-Diderot and the Institute of Political Sciences in Paris. She has published widely in the area of theories of European integration, EU institutional governance, political sociology of EU actors and administrative integration in the EU. She is a columnist in Greek and foreign press.

Chatzistavrou talks to Greek News Agenda* about the Eurozone crisis affect on the European elites’ perception of the EU project and Europe’s position in the world, stressing that they pretend to ignore the fact that the deep internal coordination deficit of the euro area is the primary cause of the EU’s ineffieciency to absorb external and internal shocks. She stresses that, given the complexity of the post Brexit era it would be misleading to assume that a certain integration scenario will prevail in the EU. Chatzistavrou also explains what the dangers of differentiated integration for the European project and acquis might be and finally comments on the recent elections’ results in the UK, France and the Netherlands.

How does the Eurozone crisis affect the European elites’ perception of the EU project and Europe’s position in the world?

For more than four decades, the EU has been considered to be a driving force in Europe through the building of a market Union that was widely perceived as a stepping stone toward economic, social and political security. This narrative has lost its credibility and strength progressively since the mid-90s. Actually, the Eurozone crisis was not the triggering factor but the detonator of a process that was already well under way. In the early 21st century, European elites are reacting rather than acting to endogenous and exogenous pressures, i.e. the rise of neo-authoritarianism at European and international level, the continuing uncertainty from Brexit, deterioration of Eurozone public finances’ sustainability, increased competition with longstanding and emerging economic powers, ever-increasing security threats etc.

Facing all these challenges, European elites attempt to make the European project sustainable by introducing a new narrative that is based upon the idea that the EU needs to adapt to these changes in order to avoid geo-political and geo-economic declinism. The creation of a common defense pillar, the adoption of common strategic approaches to fight terrorismand the conclusion of bilateral trade agreements with a view to opening up more international markets are on the top of the new EU agenda.

Since Eurozone membership seems less attractive than before, European elites highlight the link between economic integration and security by placing at the centre of the discussions the idea that deeper integration can proceed to the field of defence and security policy. This will allow the EU to play a role as a global actor, give an impetus to political integration, thus enabling member states to move forward with Eurozone policies. In the meanwhile, it is pointed out that for those member states willing to participate in a later stage of enhanced cooperation within the EU, beyond the firm commitment to comply with pre-determined fiscal rules, it is of major importance to ‘get rid of the structural rigidities’ of their national economies and further to promote their flexibility and their coordinated opening to international markets. The idea conveyed by dominant European elites is that the euro-crisis is mainly due to the structural functioning of the European economy, pretending to ignore the fact that the primary weakness of the EU in absorbing external and internal shocks remains the deep internal coordination deficit of the euro area.

The White Paper on the Future of Europe, presented by the European Commission on  March 1st 2017, sets out five scenarios regarding the future of Europe, which correspond to five integration models. Which of them seem more likely to prevail in the post Brexit era?

These scenarios presented by the European Commission are devised as ideal types to capture extremely homogeneous options of integration models, leaving the misleading impression that one of them will prevail. Reality might be more complex than theory. The eventual promotion of differentiated partnerships will probably promote the creation of different levels of integration and memberships (multi-level and multi-entry Europe) in an important number of thematic pillars: monetary stability policies and stabilization of fiscal and economic policy, migration, internal security and border management, defense cooperation and external security. Not to be excluded is the adoption of the majority decision-making rule through the conclusion of new ad hoc thematic treaties that will validate the planned regulatory framework for cooperation of a thematic pillar under the influence of the most powerful member states. The result could be a minimal Europe based on the elemental plan of the single market, beyond which groups of member states will pursue more advanced projects but without any common governance architecture. This will lead to a complex map of differentiated integrations involving different groups of different countries in different policy areas rather than one core group separating itself from the rest. This is a possible real-life scenario of spatially permanent differentiation where the goal of unified integration is abandoned in some (or all) areas, while only some groups of member states cooperate (in extent or/and in depth) together in variable and specific policy fields.

Differentiated integration occurs whenever EU law is not uniformly valid in at least one of the member states. A governance model with multispeed (an environment of cooperation in specific sectors) and multitier (an environment of cooperation with separate institutions) characteristics, involves different member states in different sectoral cooperation schemes. Traditionally-speaking, the concept of a multi-speed Europe is related to a purely temporal variance in levels of EU states’ participation in integration, which nevertheless shares the same goal, but a number of them will cooperate together at a faster pace than the others (instrumental differentiation). In the post-Brexit era, which model seems to be the most viable solution? Until the 2008 crisis, instrumental differentiation was the dominant pattern. Since then, this changed to a certain extent with the reinforcement of the intergovernmental governance of the Eurozone. If constitutional differentiation is going to be mainly privileged in the future, it will promote the pattern of stable exclusion of some member states and a stable variance in levels of EU member states’ participation in cooperation.

Given the Union’s increasing heterogeneity and major differences among EU countries, there are many who argue that the “willing and able member states should make a qualitative leap forward on their own, if others do not share the same expectations, aspirations and values”. A successful leap forward, where the dominant model of governance will be a multispeed Europe, is it only a matter of political willingness or is it also a matter of political convergence on specific public policy orientations?

The use of policy tools of differentiated integration in various sectors risk challenging the very logic of integration in its classic definition, as well as the general principles and primary sources of EU law. Flexible integration now risks becoming an instrument for conducting sectoral policy schemes rather than a vector for positive integration. The only way to develop a multi-speed model of governance while maintaining EU’s systemic cohesion is to use the appropriate instruments provided for in the Treaties (enhanced cooperation, structured permanent cooperation), thus using the European Union's institutions and procedures. The acts adopted in the framework of institutionalized cooperation are implemented by the participating Member States, while the others are informed on a continuous basis about the evolution and can later on, if they want to, participate.

Privileging the accommodation of flexibility outside the EU’s institutional framework or further developing institutional intergovernmentalism may prejudice a competence, right or obligation of non-participating states, while excluding them permanently from a specific scheme of cooperation. A shift towards these forms of differentiated cooperation risks increasing disputes between diverging interests of EU member states. Furthermore, it risks rendering the EU captive to special interests, thereby further compromising the material and institutional acquis; a potentially aggravating factor should be kept in mind, namely the fact that the EU acquis will go through a test during the Brexit negotiations. In a domino effect scenario, some member states could demand for a special status (Austria, Poland or any other member state ruled by a hard or soft Eurosceptic leader, as it could be the case of Italy’s Five StarMovement), giving even more credit to the idea of ungovernability and delegitimation of the European project.

Would you like to comment on the results of the elections in the UK, France and the Netherlands?

What is striking is that it becomes more and more difficult to predict with consistency individual party preferences and voting behaviour in neoliberal meta-democracies. In the British general election, the Prime Minister's party won 42% of the vote, with 69% turnout. It's considered to be a seismic political shock. In France, the party of the President of the Republic won 32% of the vote, with 49% turnout. It is considered to be a triumph.

May’s strategy for calling the snap election two years ahead of schedule in order to secure a large majority to strengthen her position in negotiations with the European Union failed. Theresa May relied on UKIP voters; but around half of the UKIP vote went to Labour. In fact, the overwhelming issue of this election was hostility to Tory austerity measures. After bashing Corbyn for years, analysts now explain that it represents the rejection of traditional elites and of anti-Europeanism… No doubt, Corbyn made an electoral breakthrough amongst youth and in urban areaswith the most leftist manifesto since the 80s. But, in the case of an alternative parliamentary coalition involving Labour, the SNP, Liberal Democrats, Plaid Cymru and the Green Party, he would be obliged to shift to the right…Anyway, that would only be possible in the unlikely case that Sinn Fein decides to take its seats accepting to recognize Westminster rule. As for now, in the British two-and-a-half party system, the Tories agreed to make a deal with Northern Ireland’s DUP, a British nationalist, conservative right-wing and anti-Corbyn party that supported the Leave vote but is in favour of a pro-EU market Brexit solution in order to avoid the restoration of a hard border between Northern Ireland and the Republic of Ireland in the south, while also opposing Tory social cuts.

In the case of France, Macron represents the biggest minority majority (majorité minoritaire) in the country. In the first round of the Presidential election, he gathered 24.1% of the vote, of which only 55% were positive votes supporting his political project. After years of political hypocrisy, Macron offers, after all, the French anti-state neoliberal right and the hidden neoliberal governing centre-left the opportunity to assume their ideas by proposing the ‘magic bullet’ solution: an uninhibited neoliberalism combined with a sophisticated socio-cultural liberalism. The legislative election result draws the picture of a ‘Chambre introuvable’, where a large part of the French population will not be represented in the parliament, reminding of the longstanding weakness of left forces to give convincing answers to neoliberal reformism.

The phenomenon of ‘pasokisation’ of establishtarian social democratic parties, in France or the Netherlands, reveals a double failure: their inability to track and trend (social stratification changes and declassification, effects of technical changes on the structure of employment and wages etc.) and their increasing remoteness from the primary materialist concerns of the vulnerable social layers of the populations. That is why in the first round of the French legislative election, popular categories stayed away from the polls, while 70% of French retirees that are among the wealthiest in Europe, voted. Paradoxically, this will enable Macron to have “unchecked powers” to impose his program.

Read via Greek News Agenda (15.12.2016): ELIAMEP’s Filippa Chatzistavrou on the Stakes of EU Summit and the 3rd Bailout 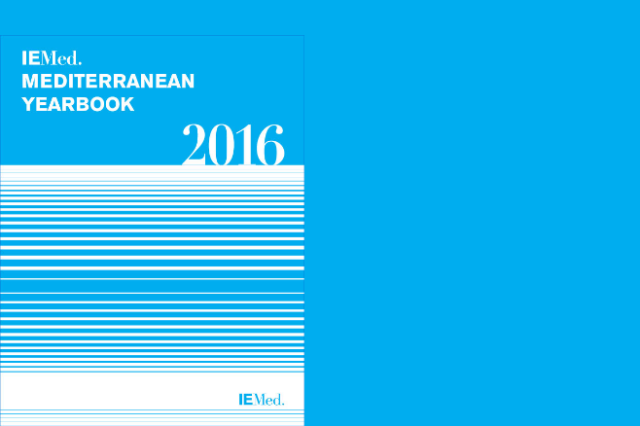