Renowned Greek film director Iannis Smaragdis’ new film “Kazantzakis” is scheduled for release November 2017. In an event titled “The Greek Light through Nikos Kazantzakis” at the Hellenic Centre of London, on May, 22, at 7.15 pm, Iannis Smaragdis will present the making of his new film. This event is held in the framework of 2017 as the year dedicated to the Cretan writer Nikos Kazantzakis and is supported by the Embassy of Greece in London.

The film, based on Kazantzakis autobiographical novel “Report to Greco”, deals with the fascinating personality of Kazantzakis, one of the most prolific figures in Greek literature whose work boasts many translations worldwide, the Greek landscape that molded him, his philosophical and metaphysic quests. Through his existential search around the world for the implementation of the ideas of Christ, Buddha and Lenin in real life, and through his hero Odysseus, Kazantzakis realizes his philosophy of the Cretan Glance: "Life is a bumpy road and one must walk it with dignity and bravery.". The life of Nikos Kazantzakis is a story of love, faith and strength of one author who survived the adversities and cruelties of his time, making his life's work live through the ages.

In an interview published in the latest issue of the Newsletter of the Press and Communication Office of the Embassy of Greece in London*, Smaragdis underlined that he felt he owed this film to the great writer - with whom he shared the same birthplace – in order to express his gratitude for Kazantzakis’ work:

How did you decide to make this movie/tribute to Nikos Kazantzakis?

It seems like I was meant to make a movie about Kazantzakis. The house I was born in is only 300 metres away from where the writer was born and another 300 metres from El Greco’s house. These three spots form a rectangular triangle. I feel it is my debt to this great writer -the most widely read Greek writer worldwide after Homer- with whom I share the same birthplace. 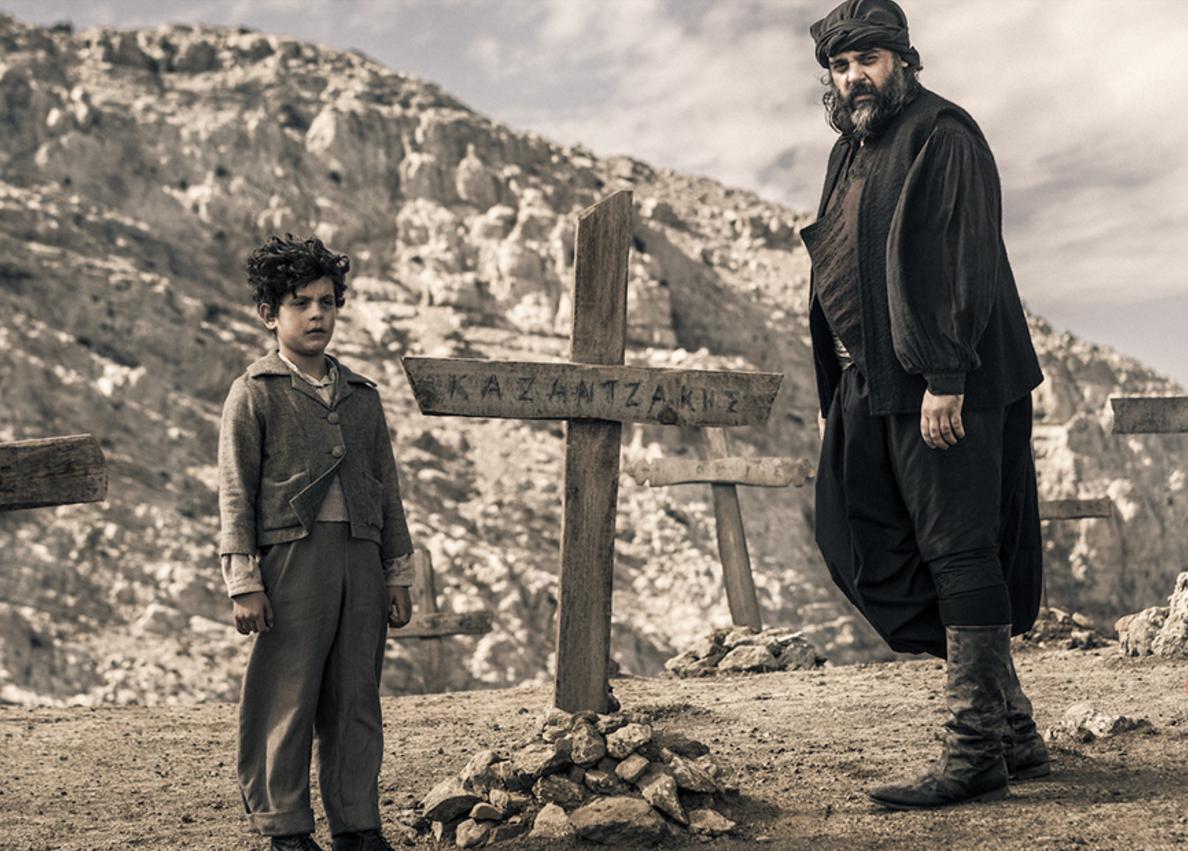 Could you tell us a few words about the plot and any difficulties you may have faced, during the filming?

The filming started in September in our beloved Crete and it has since taken place in Heraklion, Chania, Ayios Nikolaos, and then Athens, Aegina, Salamina, Lavrio, Legraina, Southern France and Berlin. I have to admit that we have experienced an unprecedented war, mainly from the vicious cinematic lobby of Athens, as they intensely tried to boycott the film. Do not forget that Kazantzakis himself also experienced the same war from the literary lobby of Athens and as a result both the author and Greece lost the Nobel Prize in literature!

However, the biggest difficulty we facedwas its funding. During my whole life, I have been a "beggar of love" looking for money to complete my films, but this time it has been a real pain to find the money it took to make this film. Fortunately, there were good Greeks and good Cretans without whose help this movie would not have been completed. The blessed, generous and great-hearted Cretan AEGEAN’s Theodoros Vassilakis, the great Hertz’s Emmanoula Vassilakis, Leonidas Frangiadakis, Managing Director at the National Bank of Greece, intelligent banker and great Cretan, the Vardinoyannis family with their “Audiovisual”, who supported us strongly, and many others.

When will the film be released?

The long-lasting shooting is over and now the film is in the stage of editing and the music is being composed by the great composer, Minos Matsas. The film will be released in Greece by “Audiovisual” this November, on the 23th. The same company released also our previous work, “El Greco”, which sold the unprecedented record of 1,200,000 tickets. 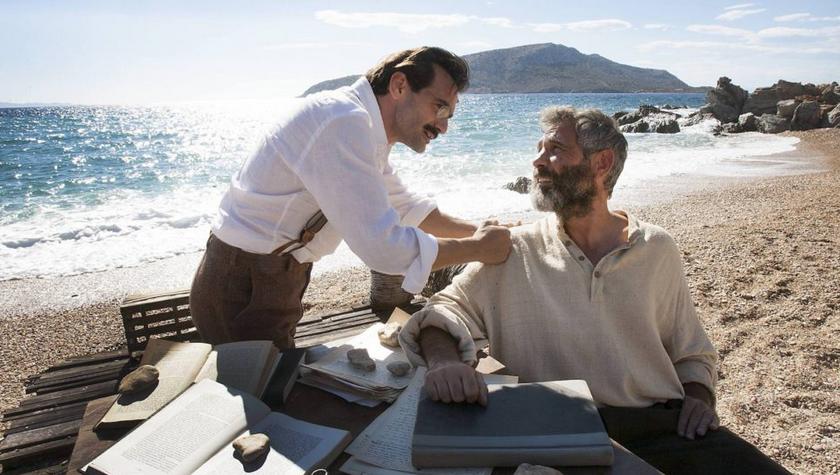 What is different between this movie and your previous ones?

I don't know… What I do know, however, is that people who ‘create’ do not choose their subjects, but it is the other way round …They choose us… And to put it in another way, Kazantzakis has said: "A demon is inside of me but it is not me. I am just the donkey he rides on and he goes - where does he go? The demon knows, I don’t. He prods me and I walk. Maybe I am a Being of a Master I don’t know but I serve him, whether this is right or wrong!” Personally, I assume that the first reason that prompted me to touch this “giant” is my unlimited love for Nikos Kazantzakis, who has been a comforting “companion” to me since the age of 14. So, the less I could do in order to "show" him my gratitude “up there” was to create this film.

And a few words about the event here in London - what should we expect?

Firstly, I would like to thank Mrs Leventis and Mrs Agatha Kalisperas who gave us the space to present footage of the film at the Hellenic Center, which is part of the events honouring Nikos Kazantzakis, since this year has been proclaimed by the Hellenic Ministry of Culture as “The Year of Nikos Kazantzakis”.

Other participants in the event will be Niki Stavrou, Director of Kazantzakis Publications, a great woman who is distinguished for her unselfishness and friendliness and a great pillar of the dissemination of Nikos Kazantzakis' high-profile work, architect Mr. Yiannis Tziros, Ms Marina Kalogirou, who plays Eleni Kazantzaki in the film, as well as a representative of the General Secretariat of Greeks Abroad of the Greek Ministry of Foreign Affairs.

At this point, I would like to mention that the event is under the auspices of the Embassy of Greece in London and supported by the Hellenic Tourism Office in the UK and Aegean Airlines.

It will also be an invitation to the distinguished Greek-Cypriot community of London that loves and supports culture, which is necessary in order to keep “Hellenism” alive. I am extremely confident that this film will find great support.

Can you "reveal" something about your future plans?

The next movie that I will be working on is "Ioannis Kapodistrias", a film based on the unknown life of a great Greek and the first Governor of the modern era of Greece. The scenario has already being written by Dimitris Pelirakis, a man of unique intelligence, the most thorough ‘connoisseur’ of Kapodistrias’ personality, work and visions. Kapodistrias was killed by ‘Greek hands’, which destroyed also the future of our country. If Kapodistrias had had the chance to organize Greece the way he had envisioned, our country would have been the leading example in education and culture.

* Many thanks to Alexis Georgiades, Press and Communication Counsellor – Embassy of Greece in London

Film of the month: The Ogre of Athens

The Museum of the Bank of Greece