From the first advertising poster to promote Greek tourism in 1929 to the “Greece from home” online platform that offers a virtual trip to Greece during the coronavirus pandemic, the history of tourism campaigns in Greece demonstrates the evolution of the country’s destination branding, as tourism itself has been transformed over the years searching for experience and authenticity in a digital globalized world. Greek News Agenda is making a brief overview of Greece’s tourism campaigns, an imaginary journey to the natural beauties, the magnificent landscapes and the unique character of Greece.

The first advertising attempt aiming to promote Greek tourism was a poster dating back to 1929 based on a photo of Parthenon, bathed in sunlight, which was produced by the famous Greek photographer Nelly’s. From the beginning of the 20th century tourists started visiting Greece and, according to the analysts (Vlachos, 2013), the key reasons for this were the first modern Olympic Games in Athens in 1896, as well as the discoveries of archaeological excavations at the turn of the century. Tourists who came to Greece were interested in visiting the country in order to see the cultural monuments firsthand. That is why the first advertising posters were mainly focused on the archaeological monuments and sites from the Greek antiquity such as Parthenon, Knossos, Delphi etc. It should be noted though that archaeological and monumental tourism had been at the core of Greek tourism development for many years provoking a vivid discussion about Greece’s identity and tourism brand abroad.

For many years, posters were the only promoting tool of Greek tourism and they would alternate between blaze of color, abstract pieces, and creations of geometric minimalism depicting also themes of summer, light, sea and ancient civilization. Since the 1930s works by great painters and artists including Spyros Vasiliou, Panayiotis Tetsis, Alekos Fassianos, Yiannis Moralis, Dimitris Mytaras, as well as by celebrated graphic designers like Freddie Carabott and Michalis Katzourakis and even the pioneering sculptor Takis were included in tourism campaigns run by the Greek National Tourism Organisation (GNTO).Posters continued to enrich more sophisticated tourism campaign until mid-2000s.

These artwork posters equally promoted major cultural events such as the Athens and Epidaurus Festival that went hand in hand with tourism. World-renowned Greek and foreign artists like Maria Callas, Rudolf Nureyev, Margot Fonteyn, Herbert von Karajan and many others that appeared at the stage of these music and theater festivals, inaugurated in the mid-1950s, with the intention to promote the image of Greece as the “Cradle of Western Civilisation”. It is not by chance that the slogan that dominated in that period was the “Going to Greece is like coming home” a simple but clever slogan dating back to the 1930s.

The emergence of mass tourism and the “sun & sea” model

From 33,000 visitors in 1950, the number of tourists that visited Greece in the 1960’s reached over 500,000 (Dritsas, 1998). Between 1961 and 1990 the phenomenon of mass tourism started to emerge as a global trend affecting also Greek tourism and since the early 1970s tourists massively preferred Greece’s islands and coastal regions for their vacations in what was called the “sun and sea” tourism model (Kostopoulou, 2014). Advertising posters are now putting more emphasis on the natural beauties of Greece, gradually replacing paintings and graphics with photos, displaying crystal-clear waters and sun-drenched beaches, picturesque island landscapes and relaxation scenes. Tourism campaigns in the 1990s become more comprehensive and marketing-oriented, while advertising companies are hired including in their campaigns print advertisements as well radio and TV commercials. The GNTO is also responsible for the publication of tourist guides, pamphlets and special editions of books as complementary promotional material (Vazou, 2014).

The Experience Tourism and the e-marketing tools

In the mid-2000s GNTO marketing campaigns are adding the element of “experience” in accordance with the globally emerging tourism trend, where experience becomes the object of the holiday, rather than just relaxation or sightseeing. In these campaigns, Greece promises original travel experiences beyond the sea and sun model promoting cultural experiences, contact with local gastronomy and habits, lesser-known activities such as horse-riding etc. Marketing campaigns are developed through logos such as “Wonderful Greece” or the slogans “Greece: The true experience” and “Explore your senses” promoting Greece as “a destination of unparalleled largely-unknown contrasts, creating an infinite experience space, in which unheard-of stories simply unfold”. It is the time when tourists are gradually transformed into travellers, who wish to connect with a place on an emotional level, learning new things about cultural and natural landscapes, searching for authenticity and the opportunity to explore undiscovered places (WTO, Handbook on Tourism Destination Branding). 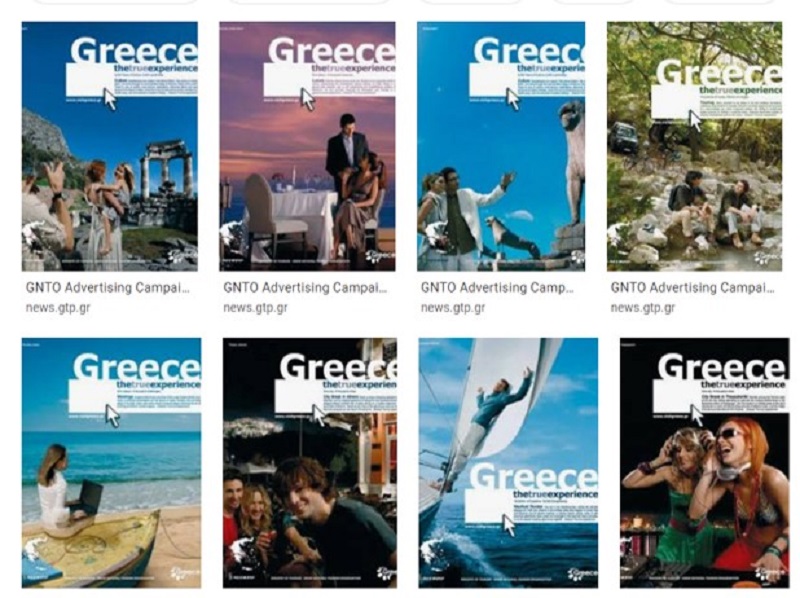 The new trend of “experience tourism” coincides with the rising use of Internet and the consequent development of e-marketing in tourism which reshapes destination brands in the online world. The GNTO launched new initiatives aiming to reposition Greece in the new digital landscape, taking full advantage of digital communication between travellers and destinations. Starting from an informative website in 2000 (gnto.gr), the GNTO was gradually shifting to the online marketing creating ten years later a tourism portal, the visitgreece.gr. The portal can directly communicate with its public using new ICT tools such as online advertising campaigns, interactive banners, SEO techniques, videos, photos etc. The real revolution though lies in the advent of social media platforms (Facebook, Twitter, Flickr, Pinterest, Instagram etc) that the portal joined around 2010, not only as a promotional tool but also as a useful means to check international tourism trends. Web applcations, e-marketing communication tools, e-newsletters also contributed to the online promotion of Greece.

At the same time the evolution of ICT and digital infrastructures increased the use and potentials of social media platforms giving the opportunity to users (visitors, tourism bloggers etc) to produce and disseminate their own content sharing their experience with the online communities. The visit.greece.blog, the YOUINGREECE campaign and “My Greece” initiative were the first GNTO’s attempts to encourage visitors to post videos and photos from their holidays in Greece magnifying the country’s promotion as an attractive destination from the individuals' perspective.

During the economic crisis in Greece, the tourism campaign launched in 2012 is based on the slogan “Greece, all time classic” aiming to overcome the country’s crisis image at that time, returning to the strong traditional tourism assets of the country. Disseminating the message that Greece still is and always be a strong brand name, the campaign also includes the slogans “Welcome home” as well as “Greek sea not in crisis”, “Greek sun not in crisis” and “Greek beauty not in crisis”. 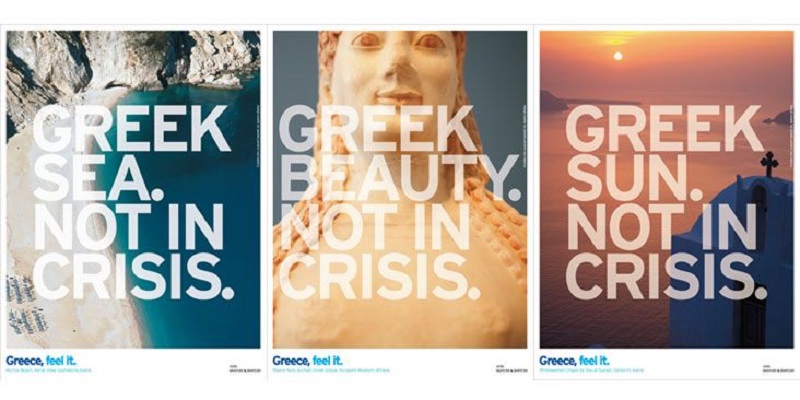 With a view to redefine and differentiate Greece as a tourism destination brand in a highly competitive global environment, the notion of thematic tourism has been gradually added to the Greek touristic agenda. Making its first steps in the mid-2000s with the campaign “Greece, The True Experience” (where thematic sectors such as city breaks, nautical routes or health & fitness were included), thematic tourism is still the big challenge for Greece as tourism brand. The development of agritourism, gastronomy tourism, religious & cultural tourism, trekking and diving tourism, conference or medical tourism, are certainly at the core of every discussion concerning tourism policy in Greece. Based on the renowned hospitality of the locals, Greece is spreading the message that it has to offer to its guests unique and authentic travel experience beyond its undisputable natural beauties. In this direction, Greece is also promoted as an all year round destination worth visiting and exploring in all seasons.

Apart from GNTO’s tourism campaigns and e-marketing tools, recent private sector’s initiatives from the tourism industry like Marketing Greece and its online platform Discover Greece are also promoting the country as a modern and enticing tourism destination. Developing synergies with private and state bodies Marketing Greece is a destination marketing organisation that draws on the latest international trends and best practice in marketing and communication. Using also all available communication channels (portal, social media and blog) enriched with stories, photos and videos, Marketing Greece supports the implementation of the national tourism strategy promoting and enhancing Greek tourism.

Synergies for a new branding strategy

This interesting synergy between the public and private sectors is also confirmed by the recent creation of a working group with the participation of the Ministry of Tourism, the GNTO and Marketing Greece, aiming to focus on a new branding strategy for Greek tourism. The main objective of this working group, being part of the “Repositioning Greece” initiative of the Greek government, is the brand positioning of Greece as a tourism destination in an international level.

Nevertheless, the positioning of Greece’s tourism brand had to be postponed because of the coronavirus pandemic and the group, responding quickly to this challenge, launched the online platform “Greece From Home” that was created jointly by the Greek Tourism Ministry, the GNTO, Marketing Greece and Google. The platform, that was designed by the Chief Creative Officer of the Greek Government, Steve Vranakis, aims to help people from all over the world travel virtually and stay connected with Greece until “physical” travels are safe again, while helping them discover destinations and be inspired by the country’s beauties. 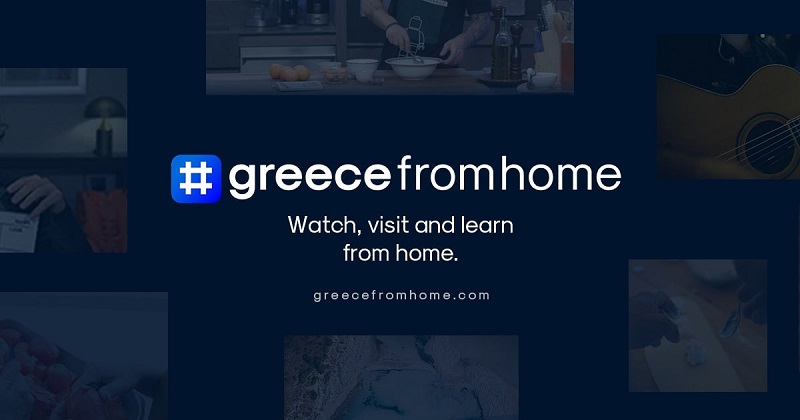 The platform has three main sections: Watch – Visit – Learn as it also helps tourism professionals brush up on their digital skills. In the Watch section, the channel offers new and selected content by Greek artists from around the world and includes Greek music, gastronomy, theatre, dance, sports, fashion as well as videos with destinations and experiences from all over Greece. In the Visit section, virtual travellers can visit Greece’s archaeological sites, museums, villages and traditions, “taste” the country’s gastronomy and “experience” nature excursions. Although the platform is not part of the new branding strategy, it incorporates the basic elements of an approach that focuses on a more personal form of hospitality, the Greek philoxenia as part of Greece’s identity, with respect for the environment, local culture and heritage, as Steve Vranakis mentioned in an interview to Greece-is.com. It is not about slogans or advertising campaigns but it has more to do with sharing values between the country and its guests.

Read more on GNA: Between a “glorious past” and an “authentic present”: a brief overview of tourism in modern Greece | Exploring wellness tourism in Greece: Thermal Springs  thalassotherapy and spas | Wine tourism experience in Greece: Thrace and Eastern Macedonia