Sapientza or Sapienza is a Greek island off the southern coast of the Peloponnese, near the city of Methoni. It is the second-largest island of the Messenian Oinousses, a group of islands, which consists of three small islands (Schiza, Sapientza, and Agia Marina. Its name is of Italian origin and means “wisdom”. All the three islands are incorporated in the Natura 2000 Network since the deepest point of the Mediterranean Sea is located south-west of Sapientza, known as "Calypso Deep" with a depth of 5,121 m.

The island has a size of 9 square kilometers and the coastline is particularly steep and rocky. The only beach on the island is “Ammos”, located in its northern part, opposite Methoni. At the center of the northern part of Sapientza in the created valley between the small mountains, there is the only arbutus forest in the Mediterranean Sea. The remarkable thing is that arbutus are trees, with a height of approximately 10 m. and the area has been designated as a "monument of nature" since 1986.

In the center of the island, there Spartolakka, an area where the vegetation is replaced by a plateau, with a peculiar yellow-orange rock and was formed by the accumulation of huge quantities of pollen. The site is a source of information for scientists about the age of the forest and the region. On the island the visitor can also see Cretan wild goats ( known as Kri Kri), wild sheep (mouflon), and several species of birds (pheasants, grouses, woodcocks, thrushes, etc.).

Near the natural harbor of Porto Longo at the southeast side of the island, there is a lighthouse, built in 1885 by Englishmen. The height of the stone tower is 8 meters and its focal plane of 110 meters. Sapientza was among the most significant trade and marine centers since the ancient times, so it has been the witness of many shipwrecks. Two of them, the ancient shipwreck of the Granite Columns and the Roman Sarcophagi, are of great importance to archaeologists.

As Alexia Vlachou mentions in an article in Xinhua, in around 1920, local fishermen discovered archaeological findings at the seabed near the north cape of Sapienza, at a depth of 10 meters. Five years later, history researcher Dionysios Polaris, traced the marbles that were lying at a small distance from the north coast and expressed the opinion that this was the wreckage of a vessel transporting antiquities. The Greek Ephorate of Underwater Antiquities proceeded with systematic research in the late 1970s. According to archaeologists, this vessel probably dates at the Roman period, since a Roman amphora was discovered very close to the columns. Studies of the column fragments showed that the columns were part of a building containing 16 columns from the grand Colonnaded Courtyard, built by King Herod in Caesarea, Palestine in the first century AD. 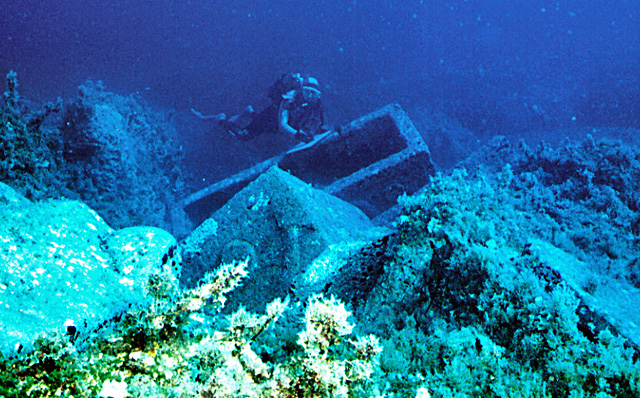 According to the Ministry of culture, a very important shipwreck has been located north of the island Sapienza relatively close to the shipwreck of Columns. The shipwreck is lying at a depth of 15 m. Its cargo contains a number of stone sarcophagi including their covers. The sarcophagi are intact except for one, which probably ruined when the ship sunk. The sarcophagi measure 2.20 x 0.80 m. The sarcophagi bear reliefs; their decoration is simple containing floral motifs, boukranion, etc. The covers are curved with simple, shaped decoration at the edges. The shipwreck is dated to the 3rd century AD. Systematic archaeological research was conducted by the Greek Ephorate of Underwater Antiquities at the end of 1970 in cooperation with the University of Bologna. Similar shipwrecks of sarcophagi have been located close to island Syros and in the marine area between island Andros and island Tinos.

Photographic material is courtesy of https://aristomenismessinios.blogspot.com/2013/09/blog-post_24.html