Paul Mason, Economics Editor for UK’s Channel 4 News, and film director Theopi Skarlatos launched "#ThisIsACoup", a documentary that presents "the story of Greece’s 2015 confrontation with the EU”, covering the seven months between SYRIZA's election win on January 2015, up to the agreement with the EU creditors after the marathon talks in Brussels on August 2015.

"#ThisIsACoup …had extraordinary access to leading Syriza politicians through the nightmare of negotiations and compromise. We filmed the elation and the despair. And we documented the lives of real people and communities: on the waterfront, in the countryside, and in tough neighbourhoods of Athens. The extraordinary resilience of the Greek people - in retreat but not defeated - is a key message of the film." 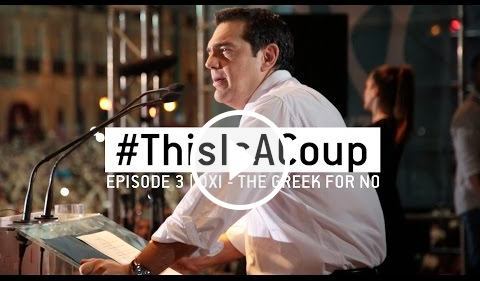 Director Theopi Skarlatos weaves interviews of politicians grabbed in the thick of the action with the stories of three Greek citizens who had hope austerity would end after the January elections. In an exclusive English interview since the climbdown, Prime Minister Alexis Tsipras addresses the critisisms of a u-turn in his politics, saying that without the agreement the Greek economy would have collapsed: "If I walked away that night [from the negociations], probably I would be a hero for one night, maybe for two, but it would be a disaster for the next days and nights" (Episode 4: "Surrender or Die"). Tsipras is interviewed alongside many senior figures in SYRIZA, including former finance minister Yanis Varoufakis, ex-speaker of parliament Zoe Konstantopoulou and current finance minister Euclid Tsakalotos.

#ThisIsACoup", produced by the film journalism unit "Field of Vision", was released for free in 4 online episodes. Find the episodes on @PaulMasonNews YouTube Channel.