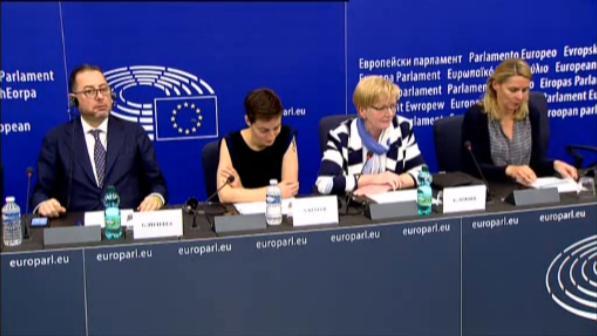 A cross-party group of MEPs has written to the Eurogroup, calling on it to conclude the 2nd review of the Greek programme and deliver the necessary measures on debt relief.

The heads of three political groups in the European Parliament on Wednesday urged Eurozone finance ministers to conclude the second review of the Greek programme and deliver the necessary measures on debt relief for Greece when they meet next Monday (Eurogroup, 22.5.2017).

Socialists & Democrats group Chair Gianni Pittella, the Chair of the Confederal Group of the European United Left - Nordic Green Left (GUE-NGL) Gabi Zimmer and Co-Chairs of the Group of the Greens/European Free Alliance Ska Keller and Philippe Lamberts asked for "concrete decisions on debt relief and debt sustainability." They also called on German Finance Minister Wolfgang Schaeuble to approach this "vital issue in a constructive and reasonable way."

The full text of the letter signed by the three European Parliament group leaders is given below:

"We call the 22 May Eurogroup to conclude the 2nd review of the Greek programme and decide for the necessary medium-term measures for the debt relief. The road map agreed in May 2016 has to be implemented.

If at the end of the week, the Greek Parliament legislates on prior actions required, Greece will fulfil all promises and agreements from its part. It would be therefore be the time that the creditors fulfil their own responsibilities and obligations. They have to urgently bridge their differences, especially those of the IMF and specific EU creditors on the necessary medium-term measures for the debt relief, which was decided to take place immediately after the conclusion of the 2nd review. These differences and the austerity measures have been proven counter-productive and have caused in the past dangerous delays and confusion.

At this crucial moment, in particular we call on the German Finance Minister Wolfgang Schäuble to approach this vital issue in a constructive and reasonable way.  It is high time to overcome the politically motivated obstacles that have been put in the way of a sustainable financial and clearly defined road-map towards debt relief so far. Concrete decisions on debt relief and debt sustainability should be taken now.

We call on the Greek government to pursue reforms that further support investment, social justice and good democratic governance. The reform of the Greek state in order to support efficiency and overcome clientelism have to continue. Stepping up competition policy to break up oligopolies in the interest of fair markets should remain priorities in order to bring the Greek economy on a sustainable path of recovery.

Further delays should not be accepted, since they will jeopardize the significant latest achievements of the Greek economy based on the sacrifices of the Greek people and the concrete prospects for economic growth, as described in all international economic and financial estimations. An agreement on 22 May Eurogroup will consolidate these positive trends, will give an additional boost to investments and reforms, thus being beneficial for both the Eurozone and Greece.

This will allow Greece access to the ECB Quantitative Easing programme, which is very much needed for the liquidity of the economy and for the positive records of primary surplus. Together with the projections that show a decrease for the government bonds, it will give Greece access to the markets and lay the ground for exiting the Memoranda era and austerity.

Greece for the first time since the beginning of the crisis has well-based prospects for economic development. Greek people should focus on MoU-exit policies and prospects, advancing towards just development and inclusive growth. The Eurogroup has the responsibility to support Greece’s course of sustainable recovery."