Climate change: policies and proposals by the Greek government 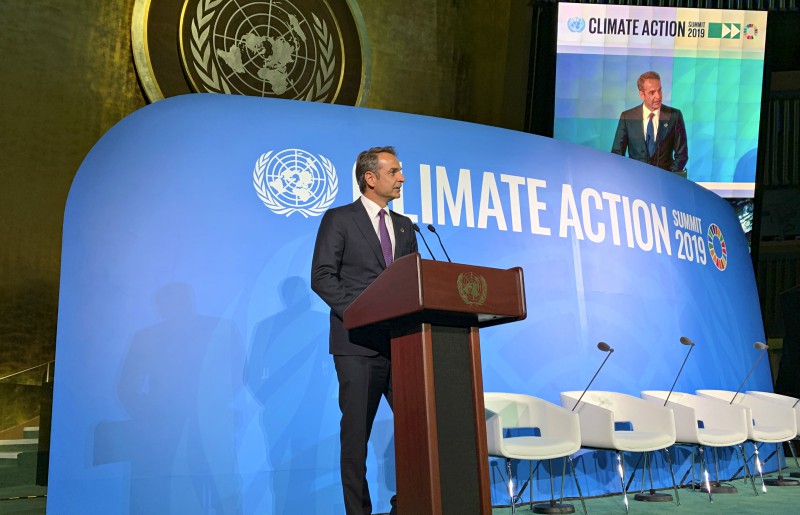 Greece had a strong presence at the 2019 UN Climate Action Summit held at United Nations Headquarters in New York on 21-23 September 2019. The Greek Prime Minister, Kyriakos Mitsotakis, addressed the main event on 23 September, presenting the country’s plans on the issue, while members of the Greek government, including Culture Minister Niki Kerameus and Education Minister Lina Mendoni, participated in the pre-Summit events which took place over the weekend, analysing particular aspects of Greece’s proposed policies.

UN Secretary-General António Guterres had called on all leaders to come to New York with concrete, realistic plans to enhance their nationally determined contributions by 2020; Greece was among the partner countries of one of the nine coalitions formed to ensure "transformative outcomes". The Coalition was focused on "Social and Political drivers", prioritised as one of the key areas by the Secretary-General.

As part of the "Social and Political drivers" track meeting, a pre-Summit event led by Greece, UNESCO and WMO (World Meteorological Organisation) on "Cultural Heritage Partnership to enable ambitious climate action" took place on Saturday, 21 September. The event was addressed by Dr. Lina Mendoni, Minister of Culture and Sports, Niki Kerameus, Minister of Education and Religious Affairs, and Professor Konstantinos Aravossis Secretary General for Natural Environment and Water at the Ministry of Environment and Energy. The key points of the proposal were also presented at the main event by the Greek Prime Minister.

Addressing the plenary meeting of world leaders on Monday, 23 September, Prime Minister of the Hellenic Republic Kyriakos Mitsotakis announced Greece’s intention to convene a high-level conference in Athens next year, aiming to adopt a resolution on the protection of cultural and natural heritage from climate change.

Pointing out that the repercussions of global warming are already visible, he known the government's commitment to adopt a new national policy for energy and the climate by the end of 2019, saying that this will include a ban on single-use plastic products starting in 2021, the shutdown of lignite-run power production units by 2028 and the increase in the share of renewable resources to 35% by 2030.

Mitsotakis warned that climate change is a problem that must be dealt with immediately, as it affects the lives of people who showed no interest in the issue until now. He explained that the Greek government has placed the management of climate change fallout at the centre of its policies, since it is expected to pose an obstacle to economic development and to the prosperity of the Greek people, because of its adverse effects on economic sectors such as agriculture and tourism.

The PM noted that Greece is fully committed to the Paris Agreement and the UN Agenda for 2030, with its 17 global Sustainable Development Goals, and it strongly supports the long-term strategic vision by 2050 of an EU economy that does not negatively affect climate. Greece's economic future is linked to its ability to protect its unique natural environment and its lands from the rise of sea level and from extreme weather conditions like storms, floods and heat waves.

Referring to Greece’s plan for a high-level conference in Athens in 2020 to adopt a proposal for the protection of cultural and natural heritage from the repercussions of climate change, Mitsotakis expressed his hope that "under the shadow of the Acropolis" world leaders could promise that this monument which "has survived for 25 centuries will continue to serve as a beacon of beauty and natural balance, appreciated by generations to come".

Ahead of his trip to New York for the UN Summit, the Prime Minister had met with Professor of Atmospheric Physics and Climatology Christos Zerefos at the Maximos Mansion and was briefed on the impact of the climate crisis on Greece’s environment and cultural heritage. Zerefos heads the Research Centre for Atmospheric Physics & Climatology of the Academy of Athens which the proposal that the Greek foreign ministry's climate change directorate has submitted to the UN. Mitsotakis had expressed his full support for the proposal, which aims to take measures and create mechanisms to protect cultural and natural heritage by increasing its resilience and ability to adapt, and by promoting research and education. 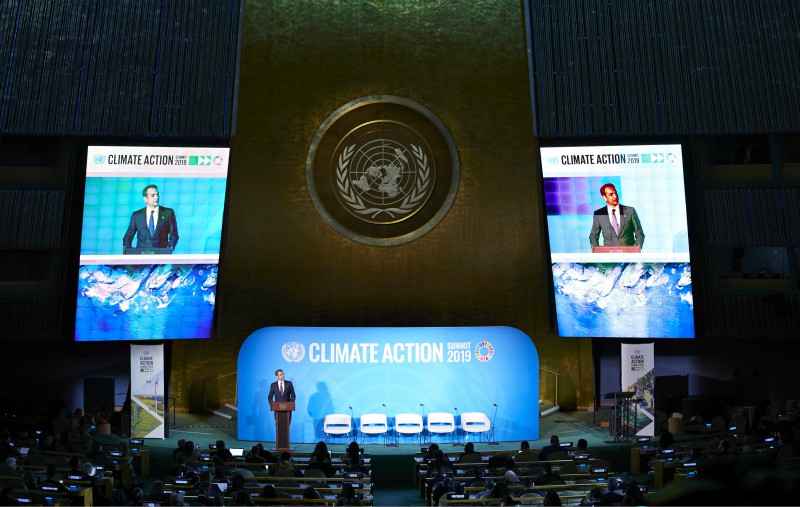 Dr. Lina Mendoni, Minister of Culture and Sports of the Hellenic Republic, delivered the opening remark at the pre-Summit event "Cultural Heritage Partnership to enable ambitious climate action" led by Greece, UNESCO and WMO. In her remark, titled "Tackling Climate Change Impacts on Heritage: A Global Challenge Calling for Local Action", the minister presented the key positions of the partnership.

Mendoni began by analysing the dangers posed to sites and monuments of paramount cultural significance by extreme climate phenomena related to temperature changes, precipitations, floods, fires, soil erosion and sea level rise. As she pointed out, climate change not only poses a severe threat to movable and immovable monuments, but also affects the intangible heritage of several communities since it has a major impact on their social and economic activity and everyday lives.

Referring to the call for local action, Mendoni explained that although climate changes pose a global level threat, solutions can only be achieved on a local level, through a bottom-up process that will involve partnerships and alliances among multiple stakeholders: not just the national and local governments but also businesses, as well as civil society actors. This does not just stem from the fact that local communities directly affected by the phenomena have to be taken into account, but also from the need to assess the problems faced by each different site, its distinct characteristics and particularities, and to address the situation accordingly.

Regarding the ways in which cultural heritage and the natural environment can be protected, the minister placed emphasis on the concepts of prevention and monitoring. This is because, with the exception of major natural disasters, changes are often invisible, gradual, and may not be detected in the early stages. As an example of this, she mentioned the Greek Culture Ministry’s initiatives for the digital documentation of the country’s immovable and movable monuments through the Directorate of the National Archive of Monuments. The data collected by the Ministry are used to create up-to-date indexes and risk assessment tools for different types of monuments, allowing experts to identify problems and develop the appropriate solutions.

The Greek proposals to address climate change include:

1. The creation of an interdisciplinary committee in the Ministry of Culture for the study of the phenomena and formulation of a National Action Plan, which will encompass both national and international initiatives.

2. The creation of a high-level working group of experts, representatives of international organisations and civil society institutions (such as UNFCCC, UNESCO, IPCC, ICOMOS, EUROPA NOSTRA), who will further examine the impacts of climate change on cultural heritage and propose adaptations measures, which will be integrated into the national policies of the UN member states.

3. The establishment of an annual "summer school", hosted by a different country, on a rotating basis, enhancing the skills and knowledge of those responsible for cultural heritage management in the UN member states.

As Mendoni pointed out, our reaction to the dangers of climate change presents us with an opportunity to reassess our current cultural management policies, and take steps to involve local communities and civil society in the decision-making process as well as the implementation of national and international initiatives.

Niki Kerameus: The role of education

Placing emphases on education as a key element in responding to climate change, she stressed the importance of:

- raising awareness in schools and providing students with information regarding the dangers of climate change through primary, secondary and tertiary education programmes,

- highlighting the particular threat of climate change on World Heritage,

- lifelong training of decision-makers, managers of historical sites, educators and other stakeholders,

- preparing the new generation to face future challenges and help reverse the damage.

Kerameus also empasised the importance of local actions in the shaping of young minds and the promotion of values such as solidarity, altruism, responsibility and critical thinking.