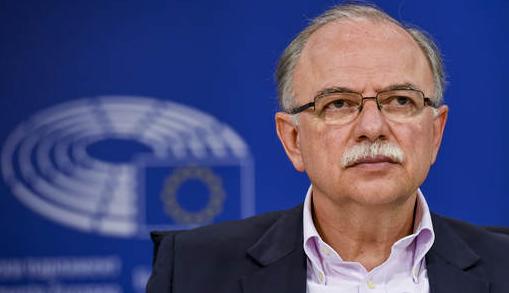 Interview with Dimitris Papadimoulis, Vice-President of the European Parliament and head of SYRIZA party delegation by the European Progressive Forum, "an open space of information and dialogue" that aims to "to promote and elaborate progressive ideas and proposals on the future of EU and Eurozone, the ongoing challenges of the European Project and the steps ahead..."*:

What are the priorities for the European progressive forces and how realistic their goals are?

Since 2015 there have been discussions between progressive forces to tackle the current policy mix in Eurozone and introduce a new wave of policies that enhance social justice and growth.

The rise of Syriza in power has strengthened the need to accelerate such initiatives in European scale. The "Progressive Caucus" in the European Parliament, i.e. with the participation of MEPs from GUE/NGL, S&D and the Greens, and the EU South Summit initiated by the Greek PM Alexis Tsipras, are two of the main pillars of action towards the necessary reform of EU and Eurozone. In view of 2019 European Elections, the aim of all these actions is to shift political balances in the European Parliament and the EU Council, so that progressive alliances can achieve majority.

These political forces strive to tackle austerity policies and bring in surface a pro-growth agenda, increase democratic legitimacy and transparency in decision-making, strengthen the role of the European Parliament, address social and regional cohesion and tackle tax evasion.

These proposals are realistic to the extent that all progressive forces understand the challenges of our era, and try to designate clear lines against the neoliberal parties and far-right populism. If we cannot achieve to bring something new in the EU, I could well argue that the future of the European establishment will be at stake.

Tell us more about the Progressive Caucus in the European Parliament.

The Progressive Caucus is a space of dialogue based on confidence-building and open debate. It was an idea of MEPs from three different political groups that, despite their differences on some issues, they develop similar policies on core issues of European politics, such as social justice and growth, the need to bring about the necessary reforms in EU and Eurozone. Since 2015, the group has been mobilized on trade issues, against TTIP and CETA, providing alternative models, whereas it has supported Greece's efforts to successfully conclude with bailout reviews and push for debt relief measures.

In this respect, the role of Syriza party is crucial as it has accelerated discussions among these parties and proved that a left-wing government can achieve positive results within a framework of negative political balances and tight fiscal monitoring. Syriza calls for a different policy model, and this is the reason why the European Socialists are inviting PM Tsipras in their meetings. The European Socialists have acknowledged the big efforts Greece has made for the final exit from austerity and the commitment to provide a new vision for Europe and its citizens, against neoliberalism and far-right upsurge.

In this respect, one issue that needs to be addressed is that of the 'ideological detachment' of social democracy from the neoliberal camp. In France and Germany we have witnessed a huge electoral downfall of socialist parties because these parties adopted austerity policies. Social democracy needs to abandon austerity doctrine once and for all, and get back to its initial ideological roots.

How the European Left can increase its electoral appeal and turn is agenda more convincing?

Most proposals that I mentioned above have been submitted by the European Left party and Syriza. A big deal of these proposals have been incorporated in the ongoing dialogue for the future of Europe that takes place in the European Parliament, the EU Council and the European Commission.

The next step is to intensify the debate so that EU can move forward and adopt the necessary reforms. In this context, the role of the European citizens, trade unions, civil society and social partners is of paramount importance.

Jeremy Corbyn is pushing for a total transformation of the Labour Party. What could be the effect of this process in other social democratic parties in EU?

This transformation is taking place in a country that has suffered a lot from Thatcher and Blair's neoliberal legacy. Corbyn has identified the need for a left-wing shift in the Labour Party, acknowledged the dire effects of austerity, and invested in the support of middle and lower social classes to push for this transformation.

It is important to point out that even in the midst of Brexit negotiations, Corbyn's leadership can be used as an example for other social democratic parties to follow the same path. We have seen this happening in Portugal and to some extent in France and Germany, always in the framework of the different characteristics of each political system.

What is your opinion on the Portuguese government? Could it be a "governance model" for Greece as well?

The Portuguese government has made very important and decisive steps in the post-bailout era, creating the necessary conditions that are taking the economy outside the restrictive framework of austerity politics.

The alliance between the socialist party, the left-wing Bloco and the communist party is something unique in European scale and it can serve as the best possible model for broader alliances in other member-states. This is the model we are trying to endorse in the EU, pushing for a common agenda that goes against conservative and neoliberal forces.

In Greece, it is even more difficult to import and adjust this model, as the centre-left is keep adopting a harsh rhetoric against Syriza, standing closer to the right side of the political spectrum and the neoliberal doctrine of New Democracy party. At the same time, the Greek communist party remains stuck in obsolete ideas and lacks an effective strategic capability that could allow the formation of a joint alliance. Contrary to its sister party in Portugal, the Greek communist branch cannot properly identity the ongoing challenges for Greece and Europe.