Reading Greece: Dimitra Kolliakou on Writing as a Means to Explore Unknown Territory and Experiment with Language

Dimitra Kolliakou (b. 1968) grew up in Athens. She studied classics at the University of Athens (NKUA) and obtained a PhD in linguistics from the University of Edinburgh. She taught linguistics at Newcastle University (1995-2010) and lived in various places in Europe, before settling in Paris, where she teaches English to "Lycée" and CPGE students. She won the 2019 Short Story State Literary Award and the 2019 Anagnostis literary prize for Αλφαβητάρι Εντόμων (‘Insect Alphabet’, Patakis Publishers, 2018), the National Academy of Greece award and the Athens Prize for Literature for her novel Θερμοκρασία Δωματίου (‘Room temperature’, Patakis Publishers, 2006 ; 4th reprint October 2020), and the Jim Wilson prize for first time author by the National Book Centre of Greece for her novel Το Μαγείο (The magic hole, Hestia Publishers, 2001). Some of her stories have been translated into English, French and Chinese. 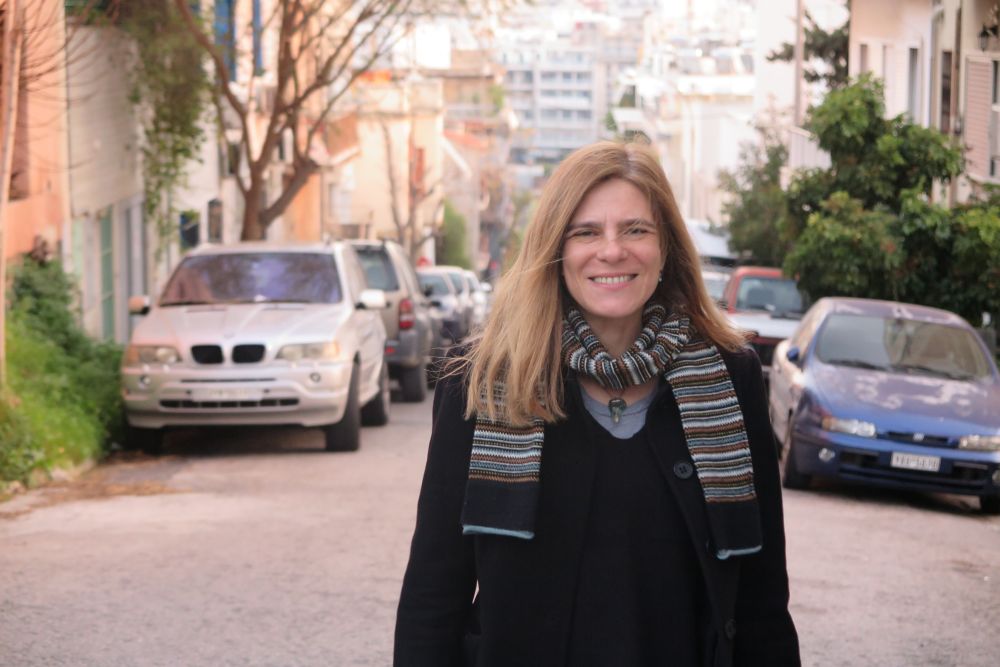 Dimitra Kolliakou spoke to Reading Greece* about writing as “an in-depth exploration of what is not well understood”, and language “maybe less as an object of study and more as a game”. She comments that she writes “from the point of view of the outsider about diversity and the possibility of connection”, and adds that “experiencing these two dimensions (the French and the Greek) gets me closer to what the “global” and the “universal” might be”. She concludes that “art in general ‘imagines’ radically different realities, and this is also true of (true) literature: readers have the freedom to reconstruct what the author has put there for them – after all, many of the details are missing and it is in the power of each reader to create them while reading and dwelling within a text”.

You have been writing novels, novellas and short story collections for more than twenty years. What drove you to writing and what continues to be your driving force? Which are the main issues your books touch upon?

I was attracted to books and reading from early on – I had an aunt I adored who lived next door and had a great library. And I’m a bit of an introvert, the kind of person who can spend a lot of time on her own. I’ve always found language fascinating, maybe less as an object of study (despite a Ph.D in linguistics from the U. of Edinburgh) and more as a game. Telling stories is a way of processing what happened - we all do that. By highlighting certain aspects of an event, one is already telling a story. Why write them (and keep writing) when there are so few readers? For me, writing is an in-depth exploration of what is not well understood. It is genuinely interesting to explore unknown territory. The main issues are not always clear in advance. They are “discovered” in the process. I’ve written from the point of view of the outsider about diversity and the possibility of connection. Having moved a lot and lived in various places in Europe, I’ve written about the issues of contemporary Europe. 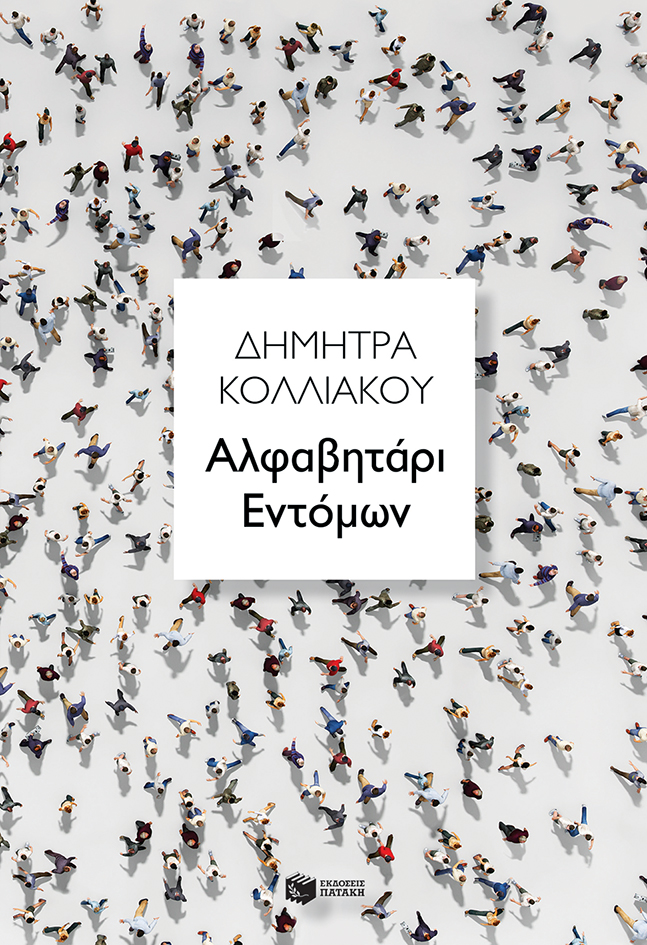 In your latest book Αλφαβητάρι Εντόμων [Insect Alphabet], narration seems to combine realism with poetic transgression, myths and tales with the language of natural and social sciences. What binds all these distinct elements together?

The binding substance is in both the form and the content. Insect Alphabet consists of 24 chapters, each corresponding to a letter of the Greek alphabet and the initial of the name of an insect. Famous or anonymous, no matter whether placed in a picturesque Greek island or in the Calais Jungle, in Paris, Vienna, Jerusalem or Edinburgh, each of the main characters has an important encounter with an insect. Cutting across the genres of “novel” and “short story”, the narrative provides a glimpse into Europe from the Second World War to the present time, exploring violence, isolation and the challenge of European identity. Homeric heroines, Sappho, Rimbaud, Alban Berg, Jung, Pasolini, as well as anthropological material (“telling the bees” when the beekeeper dies, or the presumed affiliation between snakes and dragonflies), children’s questions (“Why don’t insects live in the sea?”), medical discoveries, the story of the loss and the resurfacing of a pioneer lepidopterist’s work that curiously unites America and the Soviet Union provide the threads for a “cocoon” inspired by the many faces of Europe, those enchanting and those disenchanting, and those that are both at once.

Being a linguist as well as a writer, what purpose does experimentation with language serve in your writings?

I think writing is in some profound way experimentation with language, even for the non-linguist. But I do not like (and I consciously avoid) manipulation through language. Any attempt to impress the reader by means of “clever” linguistic tricks I find suspicious. Style is real style when the text has been sculpted to a form that renders the work that brought it there invisible. Purity effaces pretension.

There are excellent novellas and novels within the literary canon – I’m thinking, for example, of Papadiamantis, Yannis Beratis, Stratis Tsirkas, Melpo Axioti, Thanasis Valtinos. There are also wonderful short story writers (E. C. Gonatas and Yorgos Ioannou are among my favourites). To my mind, an ancient Greek text that already bears some of the most intriguing features of the novel (characters, story, imagery, soulfulness) is actually a poem: The Odyssey. 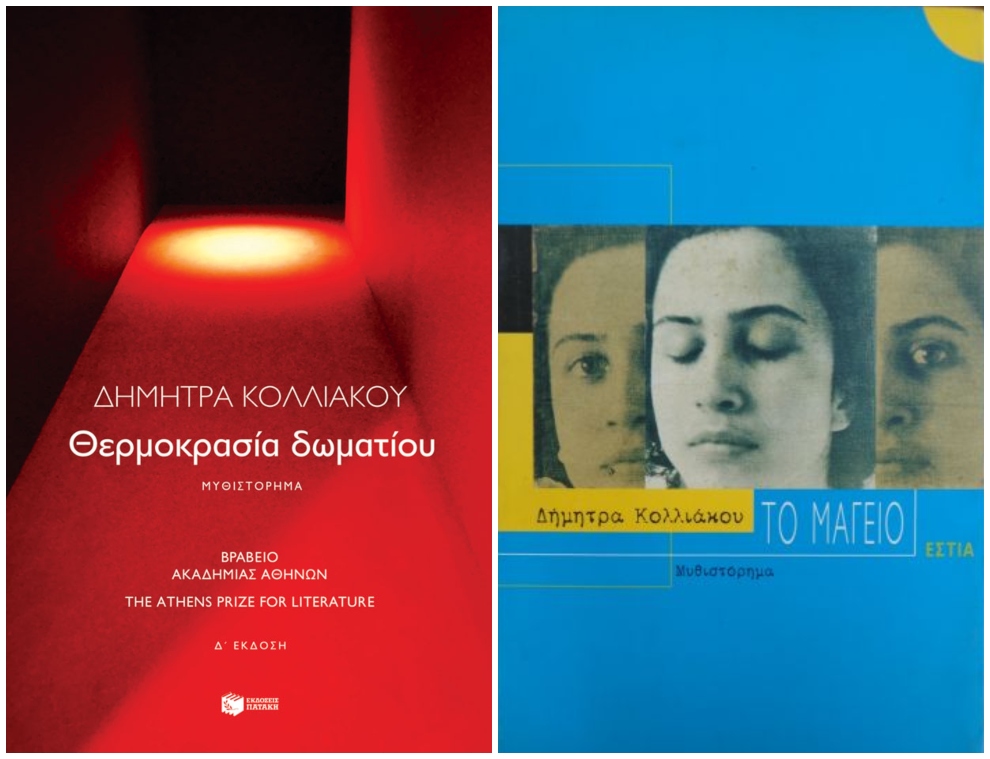 Has the fact that you have been living abroad affected the way you write and the themes you choose to delve into? How does the national/local interweave with the global in your work?

I sometimes think I might not have become a writer had I stayed, that leaving made it easier for me to take the necessary distance. Had I come back, I would be a different writer. My two daughters speak Greek and can read in Greek - I spoke to them in Greek right from the start. Nonetheless, since my early twenties I’ve been surrounded by a foreign language, in the beginning English and then French. This makes me “careful” with my native language. I can take nothing for granted, and in a way I prefer it that way. There is also something else. I live in Paris, I cannot step into a bookshop and find one of my books. This for years made me unhappy, until I realised it spices things up. My “secret garden” is truly secret. I am free. I’m a civil servant here, teaching English (including English literature and writing) to “Lycée” and “CPGE” students, who mostly do not know that I’m also a writer. This has enabled me to truly get to know the “national” and the “local” here in France. I also know the “national” and the “local” in my own country, where I frequently return. So perhaps experiencing these two dimensions (the French and the Greek) gets me closer to what the “global” and the “universal” might be. I’m one of those who believe you have to “live it” (even through some possibly different but ultimately related experience) in order to be able to write about it.

How does literature relate to the world it inhabits? Could literature be used to imagine what could be perceived as radically different realities?

Literature is a world of its own and relates to the outside world through the writer, but also through the readers. Literature necessarily conveys radically different realities, not just due to the power of imagination but also because the individual perceptions and personal “realities” of writers (possibly writing in different centuries or, in any case, in very different circumstances) cannot overlap. It is through their own personal reality that readers approach a text, and, therefore, there can be only a partial overlap in communication between author and reader, as well as among readers of a given text. The overlap can be larger or smaller depending on various factors, that mostly cannot be controlled. Of course we seek cultured writers and readers, so as not to get any close to the dystopia Orwell described in “1984”: not just being constantly watched, but also communicating by means of an impoverished sort of language (“Newspeak”) that in Orwell’s words “makes thoughtcrime literally impossible”. Art in general “imagines” radically different realities, and this is also true of (true) literature: readers have the freedom to reconstruct what the author has put there for them – after all, many of the details are missing and it is in the power of each reader to create them while reading and dwelling within a text.