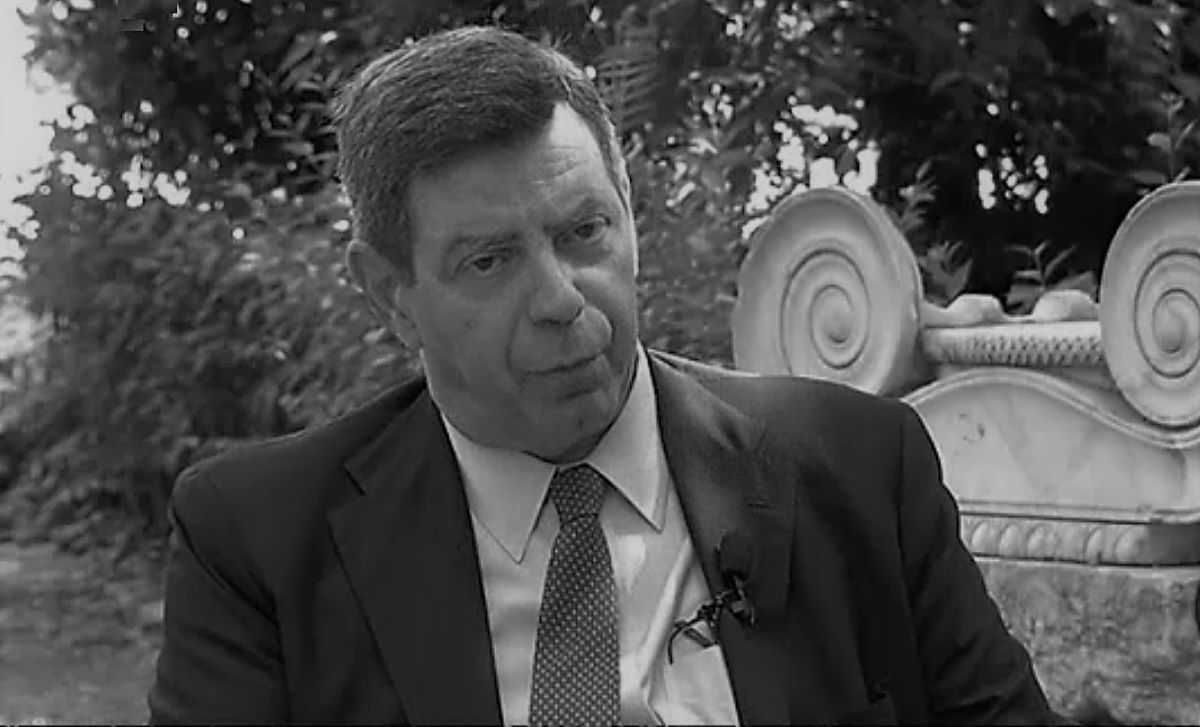 Kostas Kostis is Professor of Economic and Social History in the Department of Economics of the University of Athens (UoA). From 2006 until 2009 he occupied the Chair of Modern and Contemporary Greek Studies at the École des hautes études en sciences sociales in Paris. He specializes in economic and social history as well as in business history. Among his recent publications are History's Spoiled Children: The Story of Modern Greece (2019), The Wealth Of Greece (2019, in Greek), State and Business in Greece, The history of 'Greek Aluminum' (2013, in Greek) "The formation of the state in Greece, 1830-1914" in Citizenship and the Nation-State in Greece and Turkey (2005), History of the National Bank of Greece 1914-1940 (2004, in Greek).

Professor Kostis' book, History’s Spoiled Children, "the story of a small Ottoman province and its transformation into a modern European state" was a huge success when it was first published in Greece in 2013, at the beggining of the economic crisis. The book has gone through at least 17 editions since and has been translated to English. Its title refers to a quote by prominent 19th historian Spyridon Zambelios that "we [Greeks] are les enfants gâtés de l’histoire".

Kostas Kostis spoke to Rethinking Greece* on the War for Greek Independence as a political phenomenon within the Ottoman Empire, international alliances as a crucial factor for change inside states, how modern Greeks were able to meet the challenges of their environment and create a democratic state of European standards, whether Greeks are still "history's spoiled children" and finally, the importance of a responsible political system to achieve economic growth and tackle serious issues such as education and social security.

This year marks the anniversary of 200 years since the Greek Revolution and 191 years since the creation of the modern Greek state. In your book “History’s Spoiled Children” you state that the War for Greek Independence has to be understood as a political phenomenon within the reforms of the Ottoman Empire. Could you expand on this?

Already from the time of Adamantios Korais, that is, from the beginning of the 19th century, views on the “rebirth” of the Greeks perceived the Ottoman reality as a given, static state of barbarism and despotism. Such an attitude is of course not surprising, as it comes from the followers of the Enlightenment. The dynamics of change, therefore, lie solely on the part of the conquered. Yet this same approach is also typical of the modern Greek historiography, which overlooks that all transformations in Orthodox Christian reality are transformations that have to do with the adaptation of the Ottoman state to new international realities and with the efforts of the Ottomans for survival amid international competition.

In other words, the dynamics of transformation come from the Ottoman state itself, which seeks to secure more resources, human and non-human, and in doing so, sets in motion administrative and political reforms, overturning the existing power relations in the political administration of the Empire.

This dynamic, which has been identified with the decline of the Ottomans, is in fact nothing more and nothing less than an adaptation of the Ottoman state mechanisms to the new balance of powers is emerging in Europe. To sum up, I firmly believe that it is impossible to understand the Greek Revolution unless you take into account the transformations within the Ottoman Empire, through which –and as part of which– the Greeks emerge. 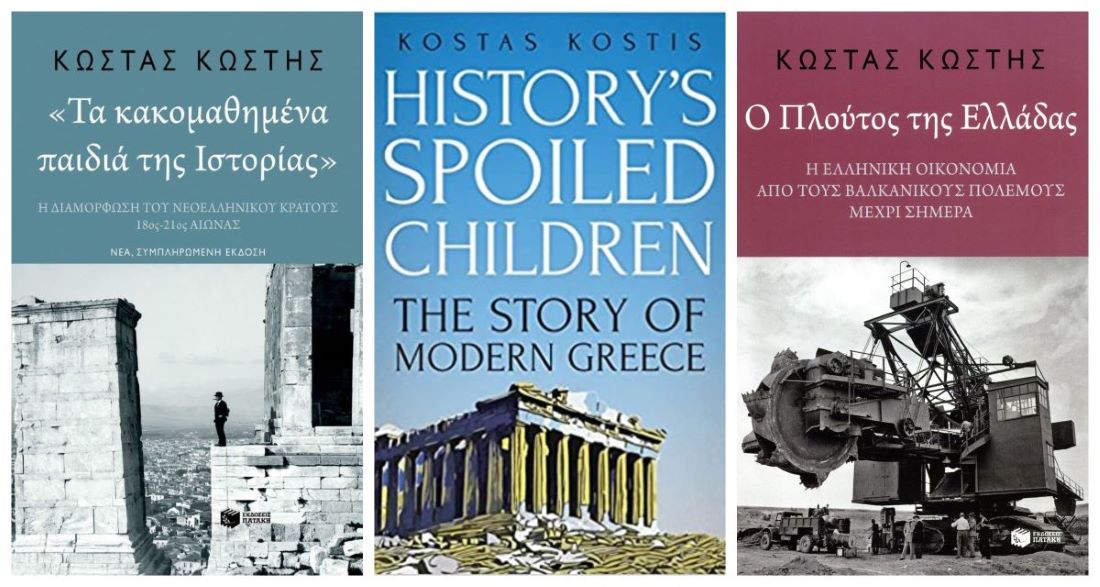 Selection of books by K. Kostis, left to right: The spoiled children of History, Greek and English editions, The Wealth of Greece

One of the claims of “History’s Spoiled Children” is that international relations, geopolitics, military and diplomacy goals are a vital (though often overlooked) tool in understanding the formation and transformations of modern Greece. Could you tell us a bit more? How can we see international relations shaping Greece now?

Although this is not my personal view, it is nevertheless typical of a large number of historians all over the world. What is argued is that it is impossible to understand the evolution of states without taking into account the international environment and the changes that determine it, as well as the attempts made by states to adapt themselves to these in the most effective way. Through these efforts, sometimes successful, at others unsuccessful, states respond to the stimuli from their environment and proceed –or fail to proceed– with the necessary reforms. Thus, the reform dynamics of a state lie not only in domestic forces, but also in the international context, which is very often the crucial factor that drives change.

This view is confirmed by the experience of recent years: Greece did not face up to its problems –which after all were international– in isolation, but within the framework of international alliances and relations: the state, as it was reformed, did not result solely from the action of some domestic forces, but more so from international interactions that also involved domestic political forces. The developments on the Eastern Mediterranean front seem to me to adequately illustrate exactly what I mean.

Your work could be considered among a new wave of Greek historiography that purports that Greek economy and state performed much better than what was claimed by previous schools of thought (dependence theory, clientelist approach). Could you walk us through some of the main elements of this view of modern Greece?

What I support, together with other historians and social scientists, is that a state cannot be judged on our wishes and expectations concerning it, but on the goals that it sets itself. Thus, until very recently Greece was treated by historians and other social scientists as a state which, already since its establishment, was never able to meet the expectations of both Greeks and foreigners. Those arguing the opposite saw their point of view being lost in the noise made by those who held a different view. In my opinion, this perception is wrong: the Greeks were able to meet the challenges of their environment and escape poverty and deprivation, creating a state of European standards, in which democracy stands firmly on its feet, with everything that this implies and presupposes.

Even a few years ago, it is doubtful whether there were any followers of such a perception, while their current successors appear rather embarrassed and at a loss for answers to relevant questions. Beyond that, however, if we want to understand exactly what the Greek state achieves, it would be advisable to study the different goals it sets itself in each period of its history, and the extent to which it achieves them. The goals of the Ottoman state were not the same as those of the state at the time of Trikoupis, much less so than those during the Venizelos period. 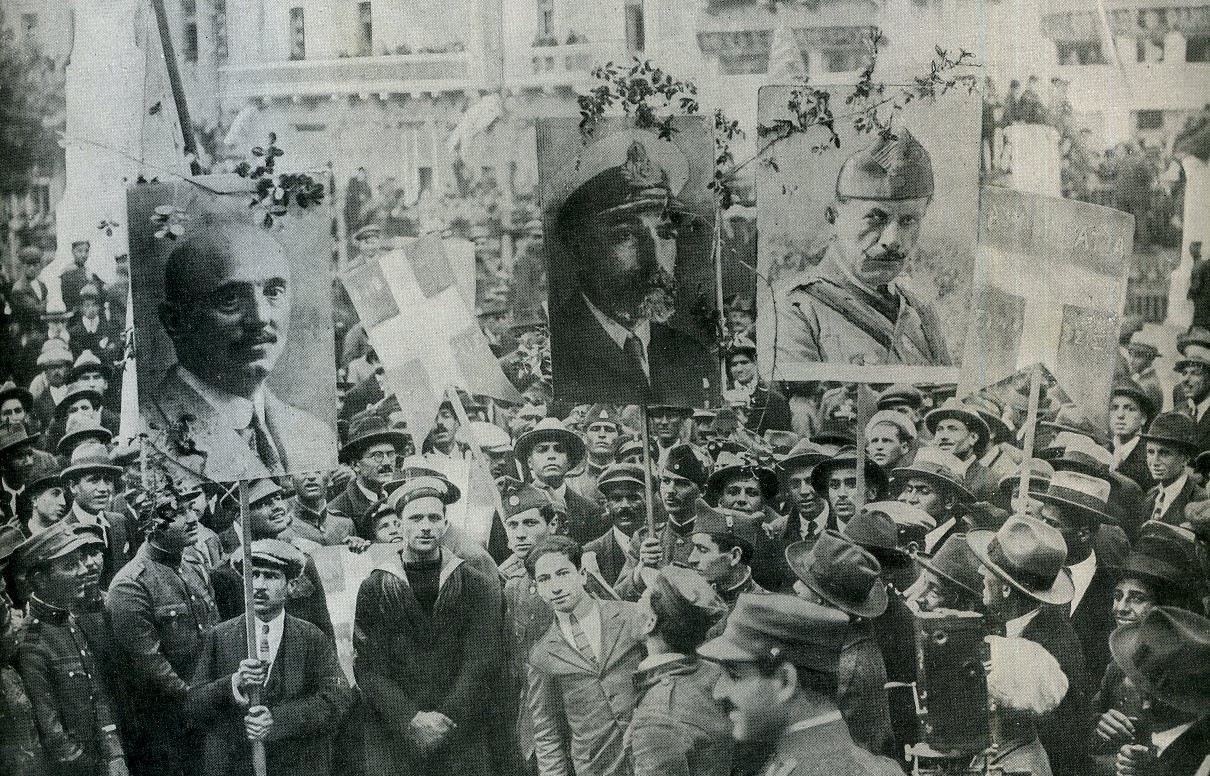 Crowds celebrating in Athens the proclamation of the Republic, 1924, with placards of republican leaders Papanastasiou, Hatzikyriakos and Kondylis

After more than a decade of consecutive crises -the financial crisis, the refugee/migrant crisis and now the global health crisis of the Covid-19 pandemic- are Greeks still history’s spoiled children?

That remains to be seen – the future holds the answer. I think, however, that the Greeks, or at least a large part of them, have realized that the particular paths promised by all sorts of demagogues do not exist, and that the solutions to the problems that we face cannot be achieved without sacrifice. However, in order not to be unfair to ourselves, I must say that there are aspects of “spoiled children” in all nations, and I think this has been made clear, over the last decade at least, by the strengthening of the political tendencies that lead to the so-called “democratures”. The Greeks have managed to deal with this phenomenon in a completely satisfactory way, neutralizing any efforts made in a logic of anti-systemic deviation.

Your latest book is called “The wealth of Greece”. What are the prospects of economic development in Greece? Are we prepared for the 4rth Industrial Revolution?

The country's main problem is political and, secondarily, economic. By this I do not mean that the economic problems facing the country are not serious; quite the contrary, they are extremely serious. But they can be dealt with, provided that the political system will shoulder the responsibility for this and, of course, that it will have the requisite capabilities. I am not referring just to a political party that will be in government, but to the whole of the political system or at least to most of it. Demagogic diversions cannot help tackle problems of such magnitude as social security or education. In this respect, I am doubtful of our readiness to assimilate the 4th Industrial Revolution.