The first annual Delphi Economic Forum will be held at the European Cultural Centre of Delphi (ECCD, February 25 – 28, 2016) under the auspices of the President of the Hellenic Republic, Prokopis Pavlopoulos. The aim of the conference is to engage business, political, academic and other influential opinion makers, in an effort to address emerging challenges for Greece and to contribute to a policy framework that will set the grounds for the country’s socio-economic transformation and revival.

Among the issues to be discussed at the Conference, according to the 4-day program, are the shifts in the global balance of power, strategies for sustainable development, Greece’s constitutional revision dilemmas, Europe’s migration and refugee crisis, Foreign Direct Investment and entrepreneurship as key drivers for the Greek economy, energy issues, the Greek pension system and the demographics of ageing, media and education reforms, the cooperation with the Greek Diaspora, as well as extremism and populism as challenges for the future of Europe. 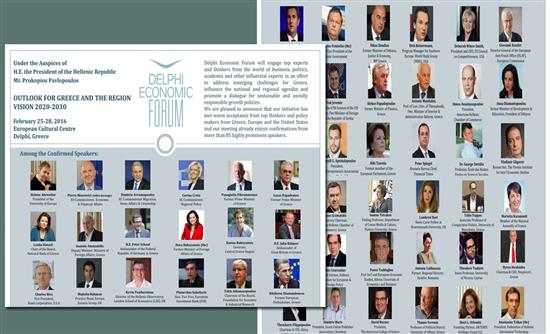 Τhe Conference is taking place in Delphi, one of the most important archaeological sites of Greece, which seems to appear in the itinerary of every traveler who is attracted to the oracle that influenced affairs in the known world for over a thousand years.