As Dr Evi Sachini, director of the NDC notes in her preface of the report, “despite a number of unfavourable points of the domestic Research, Development and Innovation (RDI) system, such as insufficient funding, lack of links between the academic, research and business communities, as well as the low production of technological and knowledge intensive products, to name a few, there are some dimensions of the national system where performance is above average. One such dimension, which has often been noted as one of the country’s strengths, is its human capital, with Greece surpassing countries with (overall) better RDI systems. Given that knowledge and its production is the ‘fuel’ of the economy, doctorate holders are considered to be valuable in this production process.The knowledge they generate is credited as being one of the central parameters for efficient and sustainable knowledge-based economic development.

Profile of Doctorate holders in Greece

According to the research, which was conducted for the first time in Greece by the National Documentation Centre, during the period December 2014-January 2015, the total number of doctorate holders meeting the criteria of the survey (PhD holders resident in Greece on December 1st 2013, aged under 70 and having obtained their doctorate during the period 1990-2013, regardless of citizenship and employment status) was 35,457. This figure meant Greece was 11th out of the 24 countries participating in the CDH survey. 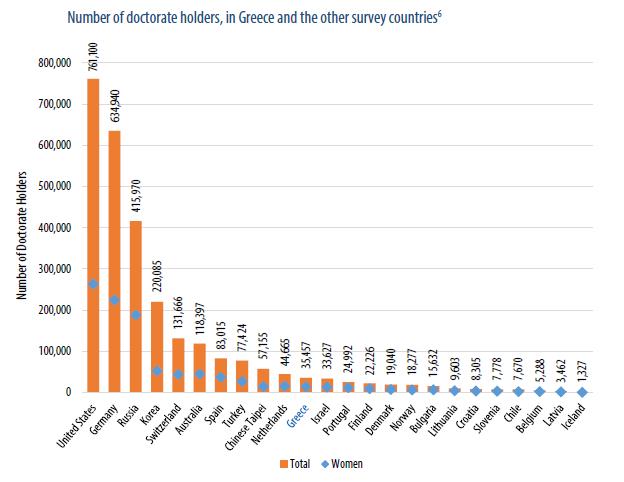 As Kathimerini Newspaper notes, with an update on figures, this number rose to 40,554, as 5,097 new Ph.D. theses were added in the period 2014-2016. According to the report, 13,793 were women doctorate holders, i.e. 38.9% of the total number. The highest percentage of women doctorate holders (45.1%) was in the ‘under 35’ age group with this number decreasing with the increase in age group, indicating the greater participation of younger women.

The majority of PhD holders, 86.2%, received their doctoral award from Greek universities. 11.2% graduated from other countries in the European Union, with the leading countries being the United Kingdom (UK), France and Germany, while 2.4% were from North American countries, mainly the United States of America. The most popular scientific fields were ‘Medical & Health Sciences’ (26.7%) and ‘Natural Sciences’ (21.9%).

The main sources of funding for doctoral studies were: ‘personal savings and support from spouse, partner or family’ (23.6%), ‘fellowship or scholarship within Greece’ (23.1%), ‘other occupation’ (21.5%) and ‘teaching and/or research assistantship’ (17.4%). The average age of those gaining a doctorate was 38 and, more precisely, 37 for men and 38 for women. The highest average for the age of graduation was recorded for the scientific fields ‘Medical & Health Sciences’, the ‘Humanities’ and ‘Social Sciences’.

The majority of doctorate holders (57.0%) were employed in the higher education sector, 20.6% in the government sector and 8.7% in the business sector. The profession is linked to the scientific field of the doctorate holder: for example, the majority (58.3%) of graduates in ‘Medical & Health Sciences’ were professionals in health.

Regarding job satisfaction 58.7% of employed doctorate holders stated that their work was related with the subject of their doctoral degrees. The majority of those employed (77.2%), stated they were very satisfied (17.1%) or somewhat satisfied (60.1%) with their principal job. The main factors for satisfaction were ‘contribution to society’, ‘job location’ and ‘level of responsibility’. In contrast, financial remuneration, in the form of salary and benefits, provided the least satisfaction.

As far as job mobility is concerned, in Greece, approximately four out of ten doctorate holders (37.1%) changed employment during the period January 2004-December 2013. This percentage puts Greece in the fourth place after Poland, the Netherlands and Israel. The higher education sector was clearly the most popular choice for employed doctorate holders who changed sector of employment during the decade January 2004-December 2013. 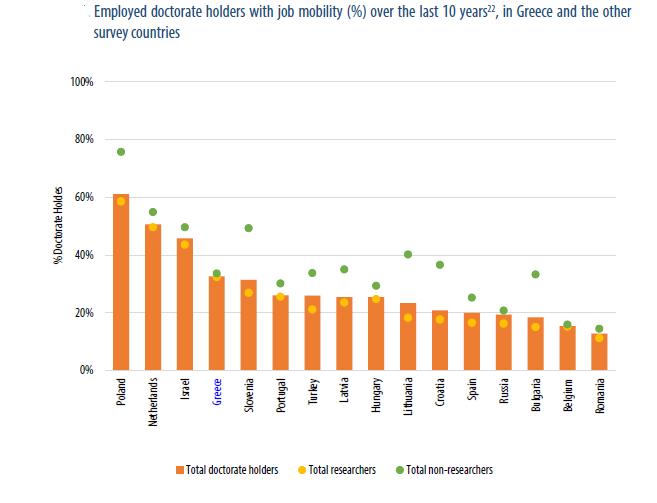 Along with Israel and Lithuania, Greece had the most doctorate holders staying in other countries for 5-10 years. The mobility of doctorate holders differed according to employment status (employed – unemployed and inactive) and the type of activity (research/non-research). There was a high rate of mobility (25.0%) amongst unemployed doctorate holders, the majority of whom belonged to the age class under 35 years old.

Similarly, there was a high rate of mobility (20.7%) amongst those who were employed (whether employees or self-employed) in research. The highest rate of mobility was recorded for the private non-profit sector (23.9%) and the higher education sector (22.5%).

With regard to scientific fields, the highest rate of mobility was in the ‘Medical and Health Sciences’ (23.9%) and the ‘Natural Sciences’ (22.6%). Greek doctorate holders became mobile for two basic reasons: their research activity (for example, concluding or continuing doctoral studies or creating their own research teams), (38.0%), or their career (seeking/finding work, postdoctoral research) (28.1%).

The CDH survey also examined the intended mobility of Greek doctorate holders in 2015. According to the results, the percentage of those intending to move to another country came to 10.2%, with the main destination countries being the United Kingdom (UK), the United States of America (USA) and Germany. 10.4% of doctorate holders employed as researchers planned to leave Greece, while for non-researchers, it was 6.3% and for the unemployed –inactive, it was 21.2%. Academic and other job related or economic factors were the main reasons for the mobility intentions of Greek doctorate holders in 2015.

As can be concluded by the report, the high mobility of Greek doctorate holders is partly the result of unemployment, especially in the younger age groups, but it proves on the one hand their high competitiveness which enables them to find a career and research opportunities abroad.

Further information on the Greek PhD theses can be obtained by the National Archive of PhD Theses (EADD). EADD provides access to the PhD theses from all Higher Education Institutions (HEIs) in Greece as well as PhD theses awarded to Greek scholars by foreign HEIs and certified by the Hellenic National Academic Recognition and Information Center (NARIC - DOATAP). The National Documentation Centre (EKT) is the organization responsible, by law, for the collection, development and maintenance of the EADD since 1985.

The registered user can search in 35,246 theses by name of author, discipline, date etc. As Head of NDC Publicity and Communication Department, Margaritis Proedrou said to Kathimerini Newspaper, 7361 of the aforementioned doctoral theses were drafted before 1990. "Legal deposit of doctoral theses in EADD was established in 1985, and the theses of previous years are those which the ECB collected and digitized on its own initiative," said Proedrou. Most of the doctoral theses classified in EADD concern medicine and health sciences, followed by the natural sciences, engineering and technology, social, humanitarian and agricultural sciences. Proedrou underlined that some theses may fall into more than one category while other older theses have not been classified in any category. He also stressed that available theses after 1990 are less than the actual number of PhD holders because some university secretariats or Hellenic National Academic Recognition and Information Center (NARIC - DOATAP) have not submitted them yet.