There is an area in Athens that is three times the size of Monaco, twice the size of New York’s Central Park and is yet to be Europe’s biggest urban regeneration project. Meet Ellinikon Project, an € 8 billion investment that would create 75.000 jobs.

Back in 2001, the former Athens International airport of Ellinikon was relocated to Spata vacating an area of 6.200.000 sqm. During the 2004 Olympic Games, the area served as a sports venue and was later used as a refugee camp hosting over 3000 refugees, while 69 public and private entities and facilities were situated there.

In 2011 the company “Ellinikon SA” was created for the management and administration of the area currently called Ellinikon-Agios Kosmas Metroplitan hub. The International Tender procedure for Ellinikon commenced in 2011 and the contract for the transfer of the shares of “Ellinikon S.A.” to the only bidder, Lamda Development, a consortium consisting of Greek, Emirati and Chinese investors, was signed in 2014 while an Amendment Agreement was signed in 2016.

It is worth noting that the purchase price for the shares was € 915,000,000, while the total investment is estimated at € 8 billion. The Ellinikon Project will contribute to Greece’s GDP by 2.4%by completion date and over € 14 billion in taxes during a 25-year investment period. According to the Foundation for Economic & Industrial Research, over 10,000 people will be employed during the construction phase and 75,000 during the operation phase. Additionally, it is estimated to attract over one million new tourists with an average spent per person around € 1000.

As the Coordinator of the Hellinikon Project, Mrs. Theopisti Perka stated to Greek News Agenda, “The Ellinikon Project will boost Greece’s efforts for the achievement of macroeconomic and fiscal targets. Our country should make a good use of its assets. It’s a pity that Europe’s best holding has been disdained and trespassed on for many years. There might be better options for its use, therefore deliberation and understanding in every step of the procedure is necessary. When we sit at the table we try to find the golden ratıo among the Investor and the State. The investment will be completed with respect of our natural and cultural heritage and by having an explicit relationship with the Investor where each side will recognize its commitments and obligations”.

At the heart of the Ellinikon Project is the Metropolitan Park, a 2.000.596 sqm area that can easily rival London’s Hyde Park and New York City’s Central Park. Accessible to all by metro, tram and bus, the Metropolitan Park will connect the municipalities of Alimos, Glyfada and Argyroupoli/Ellinikon with the seaside of the Athens Riviera.

Metropolitan Park will enhance the history of the former Ellinikon Airport, as buildings of historical and sentimental significance shall be transformed into exhibition centers and museums, while a vibrant, multi-functional environment with plenty of green spaces will be created.

A Marina, an Aquarium, an Athletics Precinct, cycling and walking paths exceeding 50km, an Observation Tower, facilities for environmental education, cultivated areas, a Sculpture Park, a multifunctional events center and free access to the beach are some of the attractions that visitors would enjoy.

Moreover, a group of bioclimatic design buildings that would include residential, hotel and office towers surrounded by a car-free pedestrian zone with various cafes and restaurants as well as a new Casino will give the city a new landmark.

Notably, all archeological locations will be highlighted, buildings of historical significance will be preserved, and natural resources will be properly managed. Also, the proportion of green areas with building areas lies at 50-50 and the cost of maintenance of the common use green spaces will be undertaken by the Investor.

Finally, the Investor has pledged to consider covering 50% of the cost of study and construction of a recyclable center as well as a domestic waste and recyclable products transit station in an area outside the Metropolitan hub. 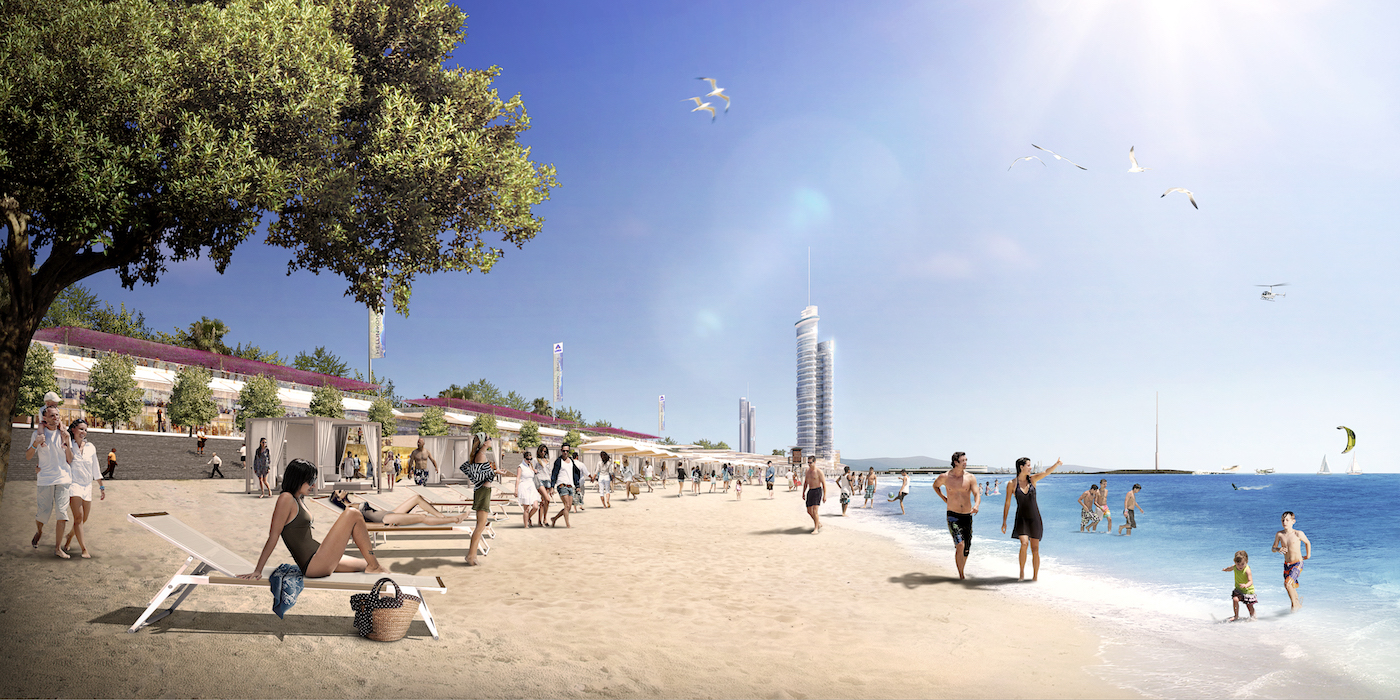 A big investment of such scale is not an easy matter. In order for the investment to be realized over80Public entities are involved. For instance, the establishment of the Agency for the Management of Common Spaces in the Metropolitan Axis of Hellenikon-Agios Kosmas involved the participation, the coordination and the agreement of seven parties, namely the Investors, the Greek State, HRADF, the Attica Region and the Municipalities of Alimos, Glyfada and Ellinikon-Argyroupoli.

The investment will commence once the shares of ELLINIKON S.A. will be transferred to the Investors by the Hellenic Republic Asset Development Fund (HRADF). For this to happen, there are 11 contractual preconditions, as agreed upon the initial contract of 2011, which need to be met. Only once those 11 preconditions are met and the transfer of the shares completed could the Project actually begin to be developed and the construction phase commence.

Those 11 contractual preconditions range from the ratification of the contract by the Hellenic Parliament and the approval of the Integrated Development Plan by Presidential Decree to the operating permit for a casino on the Property. Some of them are linked to each other and require extensive scrutiny by public administration entities and the judiciary administration, as well as the involvement of many public institutions.

Meeting those 11 contractual preconditions is a demanding affair, as in, for example, the one requiring that the property be handed over free of any institution operating there. As mentioned earlier, there were 69 different public and private sector entities - such as the tram depot, the National Meteorological Service and the Hellenic Civil Aviation Authority control - operating in the area with some of them occupying premises on the property. In order for those entities to be relocated new hosting places needed to be found with more bureaucracy involved in the actual moving. It should be noted that the relocation procedure started in 2018 and so far 95% of these entities have been relocated, while the remaining 5% will be relocated by next month.

According to Mrs. Perka, “The difficult part is behind us and pertains to the approval of the Integrated Development Plan by a Presidential Decree, as well as handing over the property free of all the entities operating in the Ellinikon area. Given that Greece is currently carrying out the land registry and the mapping of the forest areas, every time we were about to solve an issue, ten more would appear”.

Another example indicative of the difficulties entailed in fulfilling the contractual preconditions is the permit for the casino. Part of the Investor’s plan is to enhance luxury tourism by creating the first Integrated Tourist Resort in Greece, inside which a casino will operate. The process required an additionally legal framework (Law 4446/2016 and Law 4512/2018) as well as a public tender which was launched on February 2019. The casino process will finish by the end of the summer.

It is obvious that the realization of such a project is a long term process that requires a lot of effort and coordinative skills whose results are not always visible at first sight. The Ellinikon Project has long been an investment priority for all governments but a big boost was given to the procedure in 2016; since then, much has been done over a relatively short period of time.

The development of the former Athens Ellinikon airport marks the capability and readiness of Greece to carry outinvestments of a large scale. It constitutes one of Greece’s largest privately funded investments and will boost the country’s position in the sectors of tourism, innovation, entrepreneurship and culture, contributing to the national economic growth.

As Mrs. Perka put it, “The Ellinikon Project will attract investments of high added value for the economy of Attica and our country in general, will create job opportunities in high competitive sectors of the economy and will highlight Athens as an international cultural metropole, touristic center and a major center of economy, innovation, research and entrepreneurship”.