‘Athens from Beneath’: A Documentary about the Newly Poor

The economic crisis plaguing Greek society during the last few years has undeniably inspired artistic production in the country. Whether it’s a book or a film, a painting or a documentary, Greek  artists are quite interested in depicting the human aspect of the crisis, delving into its repercussions on everyday people. In Greece of crisis and austerity, behind the titles of news and the headlines of the press, the economic analysis and the statements of experts, there lies the depressing reality of the victims of the crisis, those who are beneath. Those citizens who saw their lives being degraded, who experience social and economic exclusion: armies of unemployed, retirees who cannot survive, young people without present nor future… 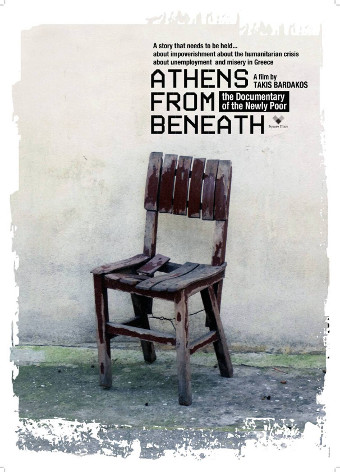 These people take center stage in “Athens from Beneath”, a documentary about impoverishment, unemployment and misery in Greece of austerity. Takis Bardakos, a once celebrated now poverty-stricken filmmaker tells the story of Greece's new poor, the unemployed facing an uphill battle during Greece's unprecedented financial crisis.

Included in the Greek Panorama of 18th Thessaloniki Documentary Festival, the film follows the stories of several Greeks, exposing the social inequality and injustice. For the sudden and unwelcome changes that the crisis has brought them, their world has literally been lost from beneath their feet. Homelessness, soup kitchens, staggering unemployment rates, poverty, and the rise of the extreme right have turned the once dream of prosperity into a socio-economic nightmare.

«Takis Bardakos held in his hands all the keys, the pictures were very strong and the ideas of sound and adequate... The camera continued to wandering through the city and to unearth images of misery, images tacit violence and poverty in the neighborhoods of Athens...»
Christopher Kasdaglis –The PressProject

«The filmmaker moved from neighborhoods in the abdomen beneath storefronts Athens. He stood in the social municipal soup kitchens, parishes spoke with people who were waiting in queues for a meal, as received in homes ravaged by humanitarian crisis, they spoke of "sited" homeless and unemployed»
Christos Ierides – Newspaper "TA NEA"

As an artistic project, the documentary follows neither the rules of promotional design nor the superficial glance of a tourist but is as harsh and deconstructed as life itself when it becomes stagnant. It is intimate yet powerful; but above all it is timely and indispensible if we are to interpret social solidarity, cultural awareness and the need for dialogue.

The documentary’s premiere will take place on April 21 at the Alkyonis New Star Art Cinema.