Stavroula Tsolakidou, aged 16, is a world chess champion for the third time, after winning a gold medal in the World Youth Championships at Khanty-Mansiysk in Russia.  The 16-year-old Greek has won titles in all three youth categories – for under-16s in 2015, for under-14s in 2013, and now for under-18s.  As of September 2016, she is ranked No. 14 in FIDE World Rankings for girls under 21. 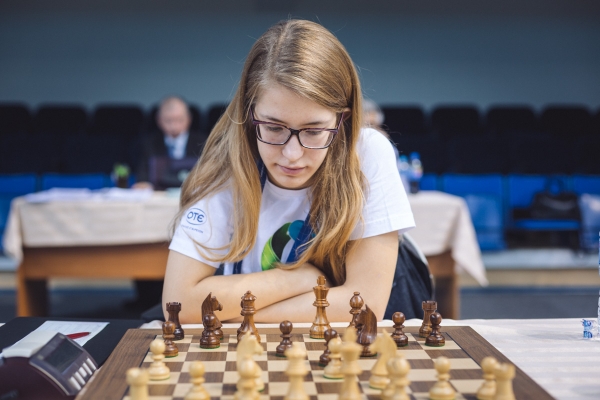 Speaking to the press conference held for the winners of the championship ms. Tsolakidou said: “This tournament was very successful for me, I was really enjoying it very much. The last Round was like a miracle. My rival Alexandra Obolentseva had a superior tie-break, so I was very lucky today as I managed to win this Championship […] I would like to be a professional chess player in the future. Of course I need to study as well and get some degree, but I want to spend most of my time playing chess.”

The young chess player started playing the strategy game at the tender age of eight,  with her older sister Maria and studied strategies that her father cut out daily from the newspapers. Ms. Tsolakidou talked to womantoc.gr about the chess-playing tradition of her home-town of Kavala: “The fact that I was born in Kavala makes me feel lucky, Kavala can be characterized as a "chess city". The city has a tradition in this sport. It has produced many talents and champions, like Anna-Maria Botsari and Antonis Pavlidis, who made Kavala known in chess circles in Greece and around the world. Thanks to the excellent work done by the chess club, and from the part of the coaches and the management, I began to improve as a chess-player and to take part in tournaments nationwide and later globally."

Vassilis Theodoridis, Vice President of the Greek Chess Federation President of the Kavala chess club said to national broadcaster ERT that ms. Tsolakidou’s distinction is unique “since no other athlete, on a national or European has ever won three consecutive world championships at such a young age," adding that Stavroula Tsolakidou is the reason why chess is taught in 16 of the 23 primary schools in Kavala today.