The unknown Mycenaean acropolis of Glas 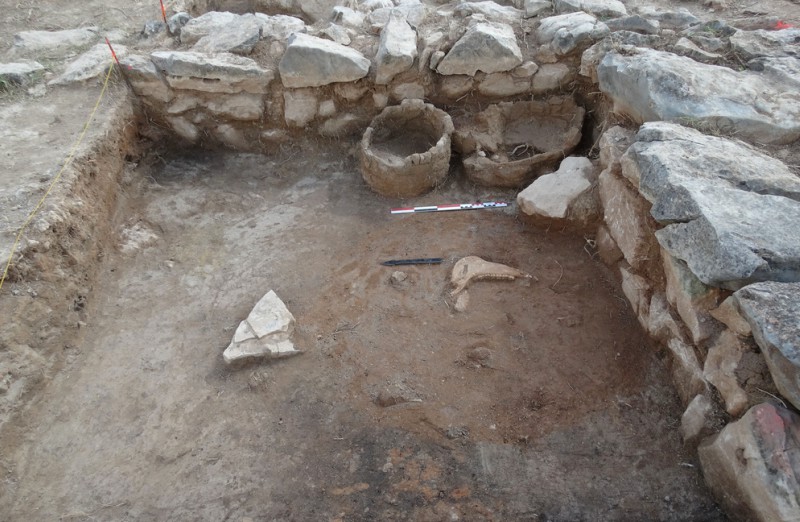 Glas (or Gla) is a low, flat-topped rocky outcrop rising from the surrounding plain of Kopais, bearing the ruins of the largest acropolis of the Mycenaean era, founded in the 13th century BC. Excavations have been carried out on the site since the late 19th century, by foreign and Greek archaeologists; since 2018, a new, five-year research programme has began, and has brought to light new finds, both architectural remains and moveable objects, including five 13th-century-BC building complexes. Findings suggest the existence of a common cultural and artistic tradition at the times of widespread Mycenaean expansion.

The hill of Glas is situated in the plain formed by the drainage of what used to be the lake Kopais in Beoetia, Central Greece. The modern area of Kopais was created after the final drainage of the lake, completed in the 1930s; however, drainage works had been undertaken before in the area: in the prehistoric times, enormous channels had been dug to drain the lake’s water into the sea to the northeast. The impressive remnants of the Mycenaean hydraulic works that were discovered represent the most important land reclamation effort of prehistoric Greek antiquity.

The most prominent city in northern Boeotia was Orchomenos, in the northwest corner of the Kopais lake/plain. The citadel of Glas was constructed by Mycenaeans from Orchomenos in the early 13th century BC, on what was a natural island in the Kopais basin, together with works to drain the lake; it is girt by a Cyclopean enceinte pierced with four gateways, while remnants of large buildings, clearly palatial, can still be seen. The installations on the citadel (Cyclopean wall, residences of officials and granaries) were built contemporaneously and the ensemble has been interpreted as part of an ambitious plan for supervising the drainage installations and collecting and storing the produce of the plain.

The Cyclopean wall was built along the hill’s brow, enclosing the entire plateau on the summit – an area seven times the size of Mycenae. A great residential building was constructed on the north side while, in the south, an extensive enclosure comprised two building complexes. These were ultimately destroyed (probably by fire) some time before the end of the Late Helladic period. The drainage system was neglected and the basin flooded once more. There was no systematic inhabitation of the citadel after this date, although evidence suggests that it was partially used during the byzantine times and the Ottoman occupation (Sp. Iakovides, Late Helladic Citadels on Mainland Greece, 1988).

The inhabitants of Orchomenos in the Bronze Age were a rural people widely referred to as "Minyans", a tribe or race often identified as descendants of Pelasgians, who may have been autochthonous or might have migrated there. The name "Minyans" is found in Homer as well as several other ancient writers and historians, sometimes as the founders of Orchomenos. The site’s ancient name is not known, and it is unclear whether it is one of the Boeotian places mentioned by Homer; some scholars have suggested it is the Homeric Arne, it could however have been ignored since it was already abandoned at the time the epic poems were created. "Gla" is thought to originate from "kala", the Albanian word for "castle".

Although the ruins of its fortifications had attracted the attention of travelers and archaeologist throughout the 19th century -including Edward Dodwell, Peter Wilhelm Forchhammer and Heinrich Schliemann- the first excavations in Glas was conducted in 1893 by André de Ridder, member of the French School at Athens (EfA). Also, in 1894 German archaeologist Ferdinand Noack produced a topographical plan of the hill and edifices. Greek archaeologist Ioannis Threpsiades also conducted excavations in 1955-1961, providing important additional evidence. 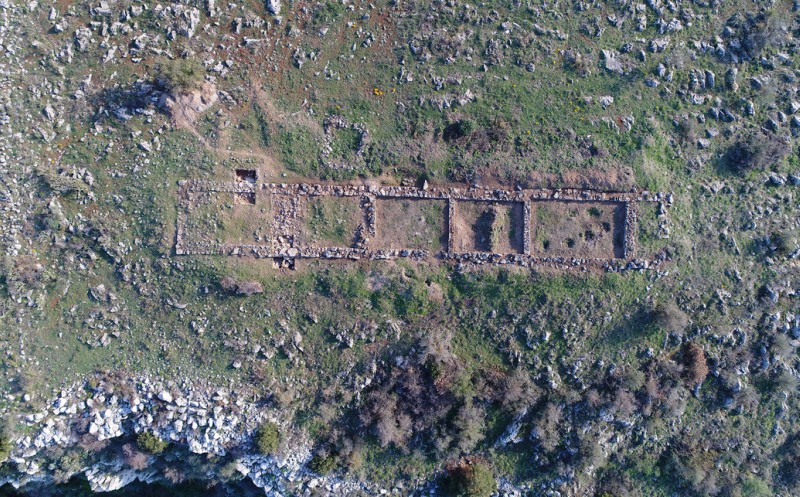 The latest extensive survey and excavation project was undertaken by Greek prehistoric archaeologist Professor Spyros Iakovides (1981-1983, 1990-1991), under the auspices of the Archaeological Society at Athens. Iakovides documented his own extensive survey, also giving a detailed account of the findings of previous excavations, in several publications concerning Glas and the other Mycenean citadels. The archaeological, geoarchaeological, and historical evidence have established the form, function, organisation, importance and uniqueness of this archaeological site.

The current five-year project of surface survey, geophysical and excavation research, again under the auspices of the Archaeological Society at Athens, is led by Dr. Elena Kountouri (head of the Hellenic Ministry of Culture’s Directorate of Prehistoric and Classical Antiquities), in close cooperatoin with the Ephorate of Antiquities of Boeotia, and with the support of the municipality of Orchomenos; it is funded by the Region of Central Greece, the Paul & Alexandra Canellopoulos Foundation and the Psychas Foundation. 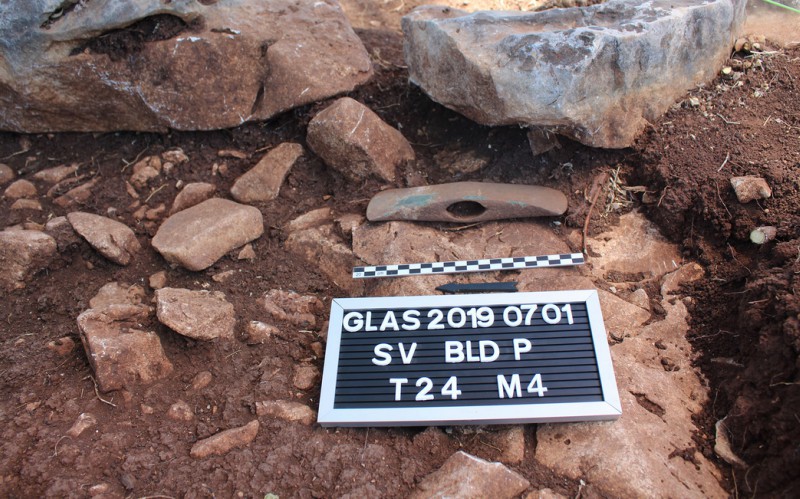 Among the purposes of the project was to try and further determine the citadel’s role in the political environment of its time, especially its relations with neighbouring Orchomenos and Thebes. According to a Press release by the Hellenic Ministry of Culture and Sports, the excavations of 2018-2019 have produced impressive new finds, including five 13th-century-BC building complexes (labelled as "Μ", "Ν", "Ο", "Ρ" and "Q"); the newly discovered complexes are symmetrical and complement the acropolis layout revealing a unified architectural plan.

Findings from these sites include Mycenaean pottery vessels, such as stirrup jars, skyphoi, hydrias, kylikes, jugs, askoi and cooking utensils, as well as fragments of wall paintings, lead containers, Mycenaean anthropomorphic figurines etc., all pointing towards the existence of a common cultural and artistic tradition at the times of widespread Mycenaean expansion.

In contrast to other large Mycenaean citadels, which bear evidence of repeated reconstructions, Glass is characterised by a clearly uniform architectural design. The fortifications and citadel were constructed on a single building plan within a limited time span, probably in the mid-13th century B.C. All the buildings were abruptly abandoned at the end of the 13th century BC, with the inhabitants taking most of their items with them. 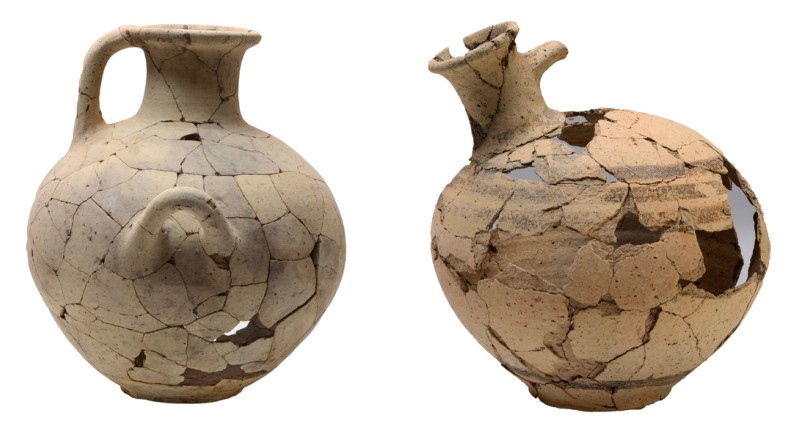 The interdisciplinary project involves scientists of various specialties, and it entails the study and analysis of structural materials (adobe, mud mortar etc.), geological study and engineering geological mapping of the acropolis and the surrounding area, analysis and evaluation of zooarchaeological and archaeobotanical evidence -with the aim of reconstituting day-to-day life and the spatial organisation in the settlement- as well as micromorphological analysis of sediment samples. The programme also involves a large number of students from Greek and foreign academic institutions, who get a first-hand experience of contemporary excavation methods while also offering their assistance to the scientific team.

The Archaeological Society at Athens

The Archaeological Society at Athens was founded in 1837, a few years after the establishment of the Modern Greek state. The official organisation managing the country’s ancient heritage was at the time understaffed and unable to properly accomplish its purpose; hence, at the initiative of a wealthy merchant, Baron Konstantinos Bellios, a group of scholars and politicians founded the Archaeological Society at Athens with the objects of locating, re-erecting and restoring the antiquities of Greece. Financed entirely by members’ subscriptions and voluntary donations, the society carried out projects such as the excavation of the Acropolis, the restoration of the Parthenon and the excavation of the Odeon of Herodes Atticus.