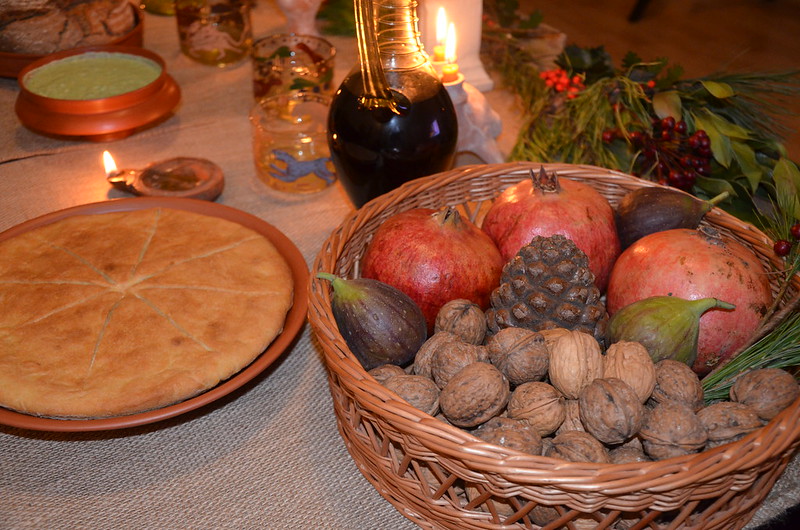 Holidays and rituals seem to have always been a universal aspect of the human experience, almost inextricably linked to being part of a community, an organised society and, eventually, a culture. In the Western world, calendars and festive days have for many centuries been based on Christian chronology and observance. But, many of these traditions can trace their roots back to Ancient Greece and Rome. This is evidenced in many ritual practices, including Christmas customs.

It is widely accepted that Christianity incorporated pagan festivals, having first remodeled their content so that it fit the new religious context. Christmas, in particular, is believed by most researchers to have originated as a Christian substitute for pagan celebrations of the winter solstice; the birth of Christ is not given an exact date in the Bible and, based on the Nativity’s descriptions, it would in fact be highly unlikely that it took place in the middle of winter.

It is thus believed that the date of 25 December was chosen to coincide the date of the winter solstice on the Roman calendar. There have in fact been speculations that the exact date was chosen because it coincided with a previous Roman festival called Die Natalis Solis Invicti, meaning the birthday of the Unconquered Sun. Sol Invictus was the official sun god of the later Roman Empire; his cult was made an official religion by the Roman emperor Aurelian on 25 December AD 274. It is worth noting that, in the Gospels, Christ’s figure is often likened to the sun, for example in the hymn of Zechariah (Luke 1:78, 79) and as the “light that shines in the darkness” (John 1:5).

Other festivals which are believed to have had a direct influence upon the celebrations of Christmas and the New Year are the Greek Kronia and the Roman Saturnalia. 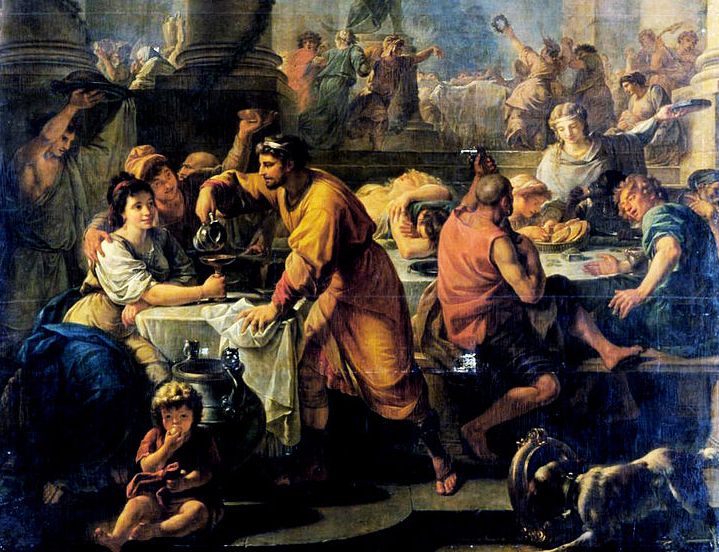 The ancient Athenian festival of Kronia used to take place on the 12th day of Hekatombaion, the first month of the Attic calendar. It coincided with the middle of summer, and honoured the father god Kronos (Cronus), considered a patron of the harvest. Although it was celebrated in the summer, it was a major influence on the most popular Roman festival, the famous Saturnalia, dedicated to Saturn, Cronus’s Roman equivalent. The festival of Saturnalia was initially celebrated on 17 December, but was later extended to three and eventually to seven days (until 23 December). Instead of harvest time, the Roman version of the celebration was in fact linked with the winter sowing season.

The Athenian Kronia was a public holiday which only lasted one day, but was even observed by the slaves, who would sit on the same table as their masters to enjoy the fruit of their hard labour. It also included offerings, especially of fruit and bread. The Saturnalia was also a public holiday, associated with merry drinking and the exchanging of small gifts, such as candles, wax models of fruit, and waxen statuettes; in this case too the slaves were spared from their usual tasks and took part in the lively feast.

People would also decorate their homes with evergreen boughs and sprigs of mistletoe, a symbol of eternal life but also love and peace; many consider these customs a predecessor of Christmas wreaths, mistletoe decorations and even the tradition of the Christmas tree. Also, according to some sources, a mock king (saturnalicius princeps) was customarily chosen to preside for several days over the festivities. This custom is believed to be the origin of the tradition of the king cake, served on the day of the epiphany in France and some Spanish and German-speaking countries; the cake, usually made of some sort of sweet dough or puff pastry, has a small figurine hidden inside. The person who finds it in his/her piece of cake is offered some kind of prize, and may be crowned with a paper coronet.

Another divine figure traditionally associated with Jesus Christ is the Greek god Dionysus, and his Roman equivalent, Bacchus. Dionysus was the god of wine, grape-harvest, vegetation, ritual madness, festivity and theatre. His origin story revolves around his birth –fathered by Zeus, the ruler of gods– which is later followed by his violent death (most famously, dismemberment by the Titans); Dionysus is then restored to a new life through re-birth, or resurrection after the reassembly of his remains.

Dionysus is an archetypal dying-and-rising deity, and many scholars have pointed out his shared attributes with Jesus Christ; in his book Dionysus, Richard Seaford points out that the Greek god of wine "was son of the divine ruler of the world and a mortal mother, appeared in human form among mortals" and also his "apparently powerless submission (in the Homeric Hymn to the pirates, in Bacchae to king Pentheus) is transformed into its opposite by epiphany".

Parallels have also been drawn regarding the association of both Jesus and Dionysus with wine; the drink is often used as symbolism in the Gospel, and turning water into wine is a recurrent theme in allegories regarding Jesus as well as Dionysus. It is also worth mentioning some of Dionysus’s epithets, including Eleuthereus and Luaios, meaning deliverer from care and sorrow, and Sôtêr "the Saviour".

Although the largest and most famous festival associated with the Dionysiac cult was the "City Dionysia", also known as the Great Dionysia, which took place in springtime (with some of its traditions still surviving in Apokries, the Greek Carnival), the most ancient one is believed to be the "Rural Dionysia" which was held in the month of Poseideon, corresponding to the second half of December and first half of January, and thus straddling the winter solstice. The festival celebrated the cultivation of vines, and included offerings of bread and fruit, wine-drinking, singing and dancing. Because the various towns in Attica held their festivals on different days, it was possible for spectators to visit more than one festival per season.

The festival of Pyanopsia (or Pyanepsia) was held in Athens in honour of the Apollo, god of light, healing and music, in the month of Pyanepsion (October/November), which actually named after the festival. Pyanopsia means "bean-stewing", in reference to the sacred offering of a rich pulse stew to the temple of Apollo, to honour of the autumn harvest. People also thanked the god with the offering of the eiresione, a branch of olive or laurel, bound with purple or white wool, and adorned with fresh fruit and small pastries made with honey, oil and wine. The branch was drizzled with wine and carried in procession by a chanting boy to the temple of Apollo, where it was suspended at the gate. According to some sources, the doors of houses were similarly decorated; this too is considered a predecessor of Christmas decorations.

Perhaps the figure most associated with Christmas folklore worldwide is that of Santa Claus. The modern portrayal of the Santa as a merry, white-bearded man carrying gifts for children is based on an amalgam of several different (mainly European) traditions, drawing from the the British figure of Father Christmas and the Germanic deity Wodan. Above all, however, he seems related to the historical figure of Saint Nicholas, as attested by his name (Santa Claus a phonetic derivation of the Dutch "Sinterklaas", meaning St Nicholas). 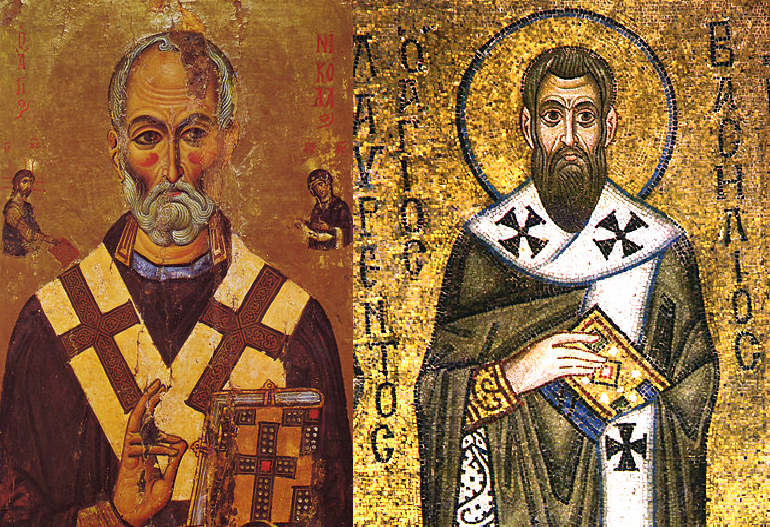 The actual Saint Nicholas of Myra (270 – 343) was an early Christian bishop of Greek descent from the city of Myra in Asia Minor, during the time of the Roman Empire. He was also known as Nicholas the Wonderworker, as he was believed to have performed many miracles. He is venerated in many countries as the patron saint of sailors, merchants, repentant thieves, children, and students, among else. Many legends regarding him show him helping the poor and needy, especially through secret gift-giving; according to one of the most famous stories about him, he once rescued three girls from forced prostitution by dropping a sack of gold coins through the window of their house each night for three nights so their father could pay their dowries.

In Greek tradition, the figure of the gift-bearing bearded old man is identified as Saint Basil, instead of Saint Nicholas; he is thus believed to bring gifts on New Year’s Day, which in Greece is also Saint Basil’s feast day. Basil of Caesarea, also called Saint Basil the Great (330 – 379), was a famous and influential theologian, and the bishop of Caesarea Mazaca in Cappadocia, Asia Minor. Basil was known for his generosity towards the underprivileged; he organised a soup kitchen and distributed food to the poor during a famine following a drought, and he gave away his personal family inheritance to benefit the poor of his diocese.

On New Year’s Day, Greek families serve the vasilopita, in a tradition very similar to that of the king cake mentioned above. Its name is also reminiscent of the word king, but it is supposed to have taken its name from Saint Basil (in Greek, the name Vassilios which means royal, kingly). Although it is called a pie (pita), it consists of simple sweet bread, usually of round shape. A coin is hidden in the bread, and it is believed that the person who finds it will have good luck for that year. Just like the custom of the king cake, the vasilopita is also believed by some to originate from the festival of Kronia and its Roman equivalent, Saturnalia.