Byzantine and post-Byzantine Monasteries in Attica

Greece has long been a destination for religious pilgrims and lovers of Byzantine art and architecture, featuring sites of great importance for faith tourism, such as Mount Athos and Meteora. Yet, not many are familiar with the important religious sites that can be found in Attica, where tourists can combine their visit with a tour of the country’s most important monuments of classical antiquity. Such places exist not only on the outskirts of Athens, but even in its very heart. In this feature, we list some of the most important monasteries that can be visited in the region of Attica.

The Monastery of the Holy Incorporeal Taxiarchs (Hagioi Asomatoi Taxiarches, i.e. the Archangels Michael and Gabriel), commonly known as Petraki Monastery, is located in the centre of Athens, in the neighbourhood of Kolonaki. Its katholikon (main church) is a cross-in-square church that dates back to the 10th century. It was renovated in 1673, when the monk Parthenios Petrakis, to whom it owes its current name, bought and restored the byzantine building. Six members of his family carried on with his endeavors to preserve Orthodox estates around Athens, which was then under Ottoman rule. Several monasteries on mount Parnitha and over 170 private properties were acquired by the monastery during the years 1672-1819. Many Greek and foreign documents, dating between 1672 and 1820, are preserved in the Monastery archives.

The monastery is known for its remarkable humanitarian and educational programs during Ottoman rule, including free medical care and treatment, primary and secondary school education. During the 1806 -1821 period, the monastery financially supported the operation of the Ioannis Dekas School, a charity boarding school providing Greek education, while in 1812 it abbot co-founded a school offering education to poor young boys. Following the establishment of the independent Greek state, the monastery donated the majority of the significant property it had acquired to found hospitals and religious, educational and cultural institutions, thus becoming a great benefactor of the Greek state.

The Petraki Monastery is also a top monument of Byzantine Hagiography of Georgios Markou the Argeius, a prolific post-Byzantine ecclesiastic iconographer of the 18th century. 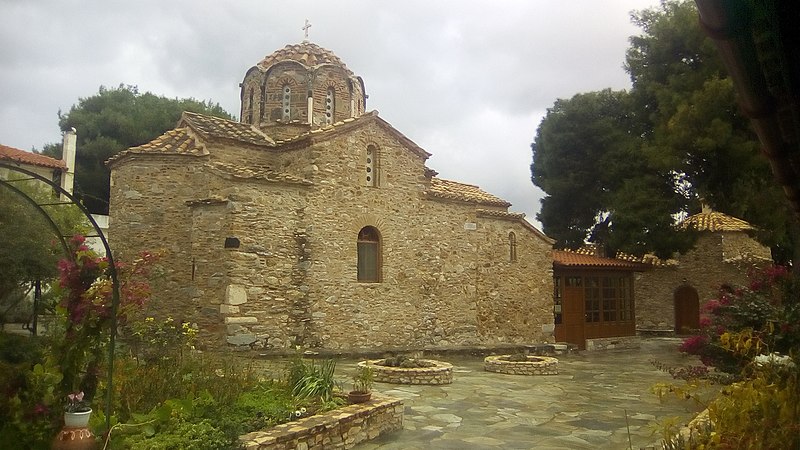 Monastery St. John the Hunter (by ΑΝώΔυΝος via Wikimedia Commons)

The Monastery St. John the Hunter (Hagios Ioannis Kynigos), also known as St. John the Forerunner (Prodromos, an Eastern Orthodox epithet for John the Baptist) or Philosophers’ Monastery is located on the northern side of Mount Hymettus, above the suburb of Hagia Paraskevi. Founded as a friary, it nowadays operates as a nunnery.

It owes its name to a prominent family from Dimitsana (in the Peloponnese), dubbed "the Philosophers", who had founded a famous Monastery (Philosofou Monastery) in their homeland. It was founded in the 12th century, and one of its first abbots was probably a man called Vassilios Kynigos ("Hunter"), form that same family. The monastery’s katholikon is a cross-in-square two-column domed church.

The well-preserved katholikon is made of mortared stone walls, using rocks and limestone, and incorporating large fragments from previously existing buildings, including many marble fragments. Marble is generously employed throughout the monastery. Frescoes are preserved in the narthex, which was built in later years, while some Byzantine-era frescoes are partially visible in older sections of the monastery. 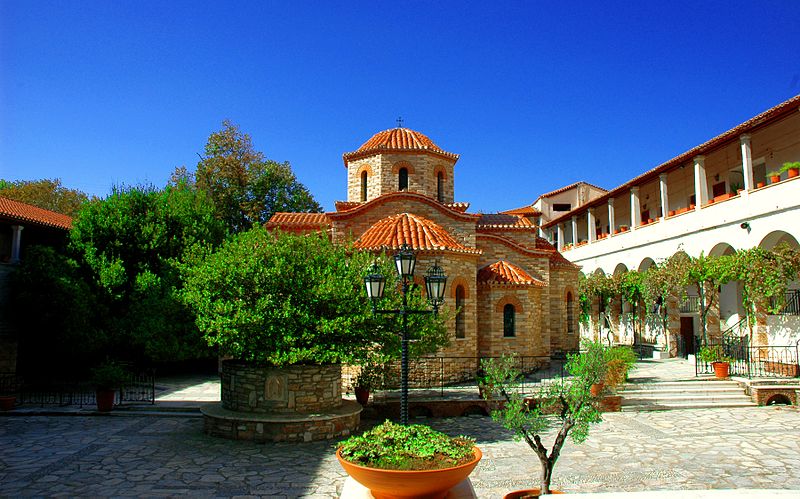 Monastery of Penteli (by G Da via Panoramio)

The Monastery of the Dormition of the Theotokos (Virgin Mary) in Penteli, commonly known as the Monastery of Penteli, is one of the largest monasteries operating in Greece. It was founded in 1578 by archbishop Timotheos, and is located roughly 18 kilometers from the centre of Athens and is built on the southern side of Mount Pentelicus, at an altitude of around 430 m.

From its founding, the Monastery was under the jurisdiction of the Ecumenical Patriarchate of Constantinople until 1858, when it came under the jurisdiction of the Metropolitan Church of Athens. The monastery flourished in the 17th century, and featured a rich library. In the 18th century it continued to acquire significant property. During the Ottoman rule of Greece the monastery provided education to many young Greeks. Together with the Monastery of Kaisariani and the Petraki Monastery it contributed financially to the operation of the Ioannis Dekas School.

In 1778, the holy Monastery functioned as a shelter for the against a devastating plague epidemic which decimated a large part of the Athens population. It was renovated in 1768 and in 1858 the building was enlarged in order to accommodate 120 monks. During the Greek War of Independence, many monks contributed to the struggle for emancipation, and the monastery came under attacks, resulting in the destruction of its library. 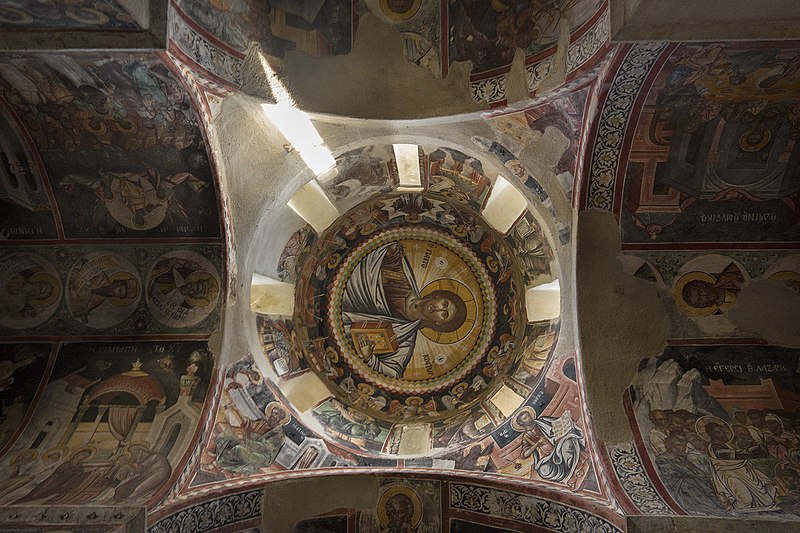 The Monastery of Kaisariani lies at a short distance to the east of Athens, on a hillside at the foot of Mount Hymettus. It is enclosed by a high wall with two gates, one on the east and one on the west side.

The Monastery’s katholikon was built in the late 11th - early 12th century and was dedicated to the Presentation of the Theotokos (Virgin Mary) in the Temple. It is of the cross-in-square type, with half-hexagonal apses, and its walls are built in the cloisonné technique. A domed narthex was added in the 17th century. About the same time, the barrel-vaulted chapel to the north, dedicated to Saint Antonius, was also added.

The frescoes in the church and narthex date back to 1682, subsidised by the wealthy Benizelos family. The oldest fresco is located on the external southern wall of the katholikon that now includes St. Anthony's chapel; it depicts the Theotokos in prayer and is believed to date to the 14th century. The Monastery also features an 11th-century bath house, also built in the cloisonné technique. The Monastery complex is surrounded by the Kaisariani aesthetic forest. 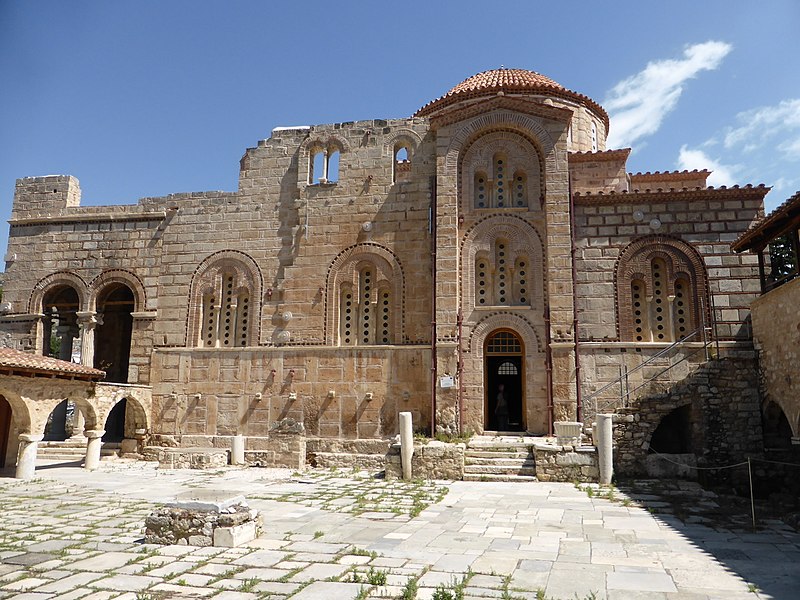 The fortified Byzantine Monastery of Daphni stands on the edge of the Haidari pine forest, at the foothills of Mount Egaleo, 11 km northwest of the centre of Athens. It is built on the "Sacred Way" (Iera Odos) leading from Athens to Eleusis, on the former site of an ancient Sanctuary of Apollo Daphnaios ("of the laurels"). It was inscribed on UNESCO’s World Heritage List in 1990.

It is believed to have been established in the 6th century, while the building preserved today dates to the end of the 11th century, when it was reconstructed. Its original katholikon, a three-nave basilica, was destroyed and replaced by a cross-in-square octagonal church with a broad and high dome. It features a narthex, while an exonarthex was added later, in the early 12th century, incorporating columns from the ancient sanctuary. In the 13th century the Monastery was bequeathed to the Cistercian Abbey of Bellevaux, who added their own cloister and remodelled the narthex and the wall of the enclosure.

The monastery was protected by strong walls, square in plan, fortified with towers and featuring with two entrance gates, on the east and west sides; today, only the north wall retains the form of the original fortification. The katholikon is dedicated to the Dormition of the Virgin Mary. The exterior of the church is meticulously crafted in cloisonné masonry, and its interior is sumptuously decorated with elaborate mosaics, while parts of the elegant marble revetments and other marble ornaments are still preserved. Following the destruction of the marble revetments, the lower walls of the main church were covered with painted scenes, probably dating to the 17th century, which are preserved in fragments.

Read also via Greek News Agenda: The Monastery of Daphni: retracing the city's Byzantine past; Early Christian and Byzantine Monuments of Thessaloniki; Athos Digital Heritage: Discovering the Cultural Treasures of Mt Athos in the Digital Age; Byzantine and Christian Virtual Museum; Greece, Cyprus and Italy walk in the footsteps of St. Paul to promote Growth and Jobs

M.V. (Intro image: The katholikon of the Monastery of Kaisariani [by C messier via Wikimedia Commons])