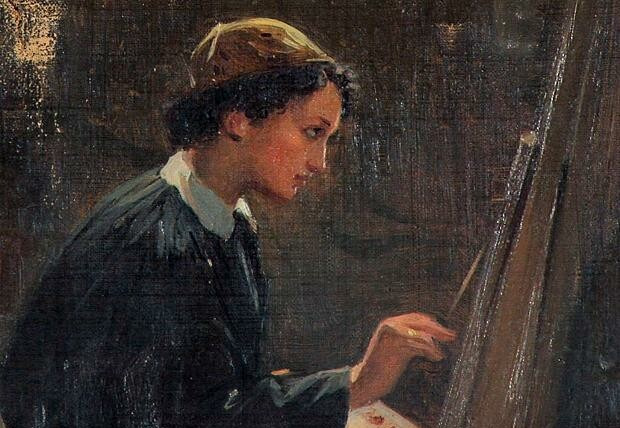 Eleni Boukoura-Altamura was the first known Greek woman to receive formal art education at a time when this was off limits for women, not only in Greece but throughout Europe. Talented, determined and hard-working, she managed to overcome the obstacles faced by her sex and achieve artistic success, but was struck by tragedy in her personal life.

She was born on the island of Spetses in 1821 to Ioannis Boukouras (or Boukouris), an Arvanite ship-owner who had himself an active interest in the arts. Boukouras took part in the Greek War of Independence, which had begun the year of Eleni’s birth, supporting it actively as well as financially. The family moved to Athens in 1936, a few years after it had become the official capital of the newly founded state.

There Ioannis Boukouras would be able to send his daughters to the Hill School, while he also hoped to find business opportunities. In 1844 he sold one of his ships and bought the first theatre ever to be erected in Modern Greece, saving it from financial bankruptcy. As a theatre director, he promoted a Greek repertoire. The "Theatre of Athens" was hence known as "Boukouras Theatre"; it was later demolished, but the site where it used to stand is still called Theatrou Square (Square of the Theatre).

Eleni Boukoura learned Italian, English and Ancient Greek. She showed artistic talent from a young age, making drawings of her schoolmates who posed for her between classes. She was encouraged by her father to pursuit her interest; he would later have Italian painter Raffaello Ceccoli, who then lived in Athens and taught at the School of Arts, offer her private painting lessons at home. Ceccoli suggested that she should continue her studies in Italy. She indeed left for Italy in 1848. 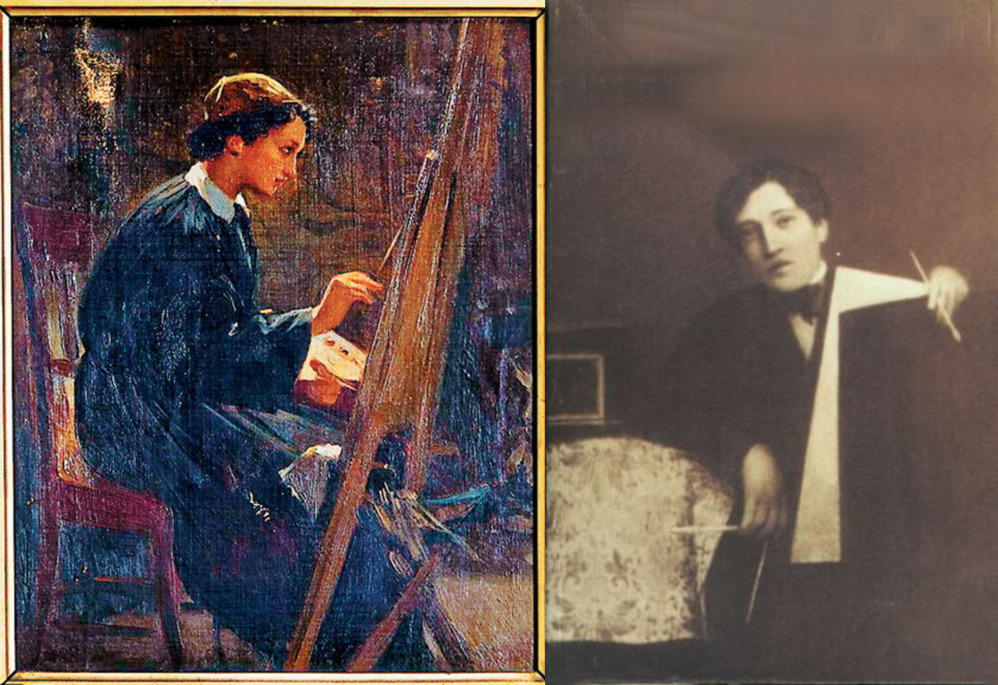 Left: Eleni Boukoura-Altamura, Self-portrait in monk’s attire; Right: Photograph of the artist posing as a man

Art schools did not accept women at the time, since it was deemed inappropriate for them to attend nude life drawing sessions, an indispensable part of art education. But Eleni was particularly determined, and hence resorted to ruse to go around the rules imposed by the times’ strict mores; she presented herself as a man, under the name Chrysinis Boukouras. She thus managed to study in of the Academies of Fine Arts of Rome and Florence. Traveling in Italy, Eleni filled her sketchbooks with studies and drawings and worked tirelessly.

During her studies, she met and fell in love with Francesco Saverio Altamura (1822-1897), an Italian painter, professor at the Naples School of Fine Arts and Redshirt (Garibaldino), who also was of Greek origin from his mother’s side. The couple would have two children together out of wedlock (Sofia in 1851 and Ioannis in 1852). Eleni would eventually convert to Catholicism so that they could get married. Their wedding took place in 1853, and in 1856 they had a third child, Alessandro.

Saverio was tired of Eleni’s nostalgia for her home country, and her melancholy disposition. In 1856 he would abandon her for the English painter Jane Benham Hay. The couple left for Paris, taking with them the youngest of the three children, Alessandro Altamura, who would later also become a painter. 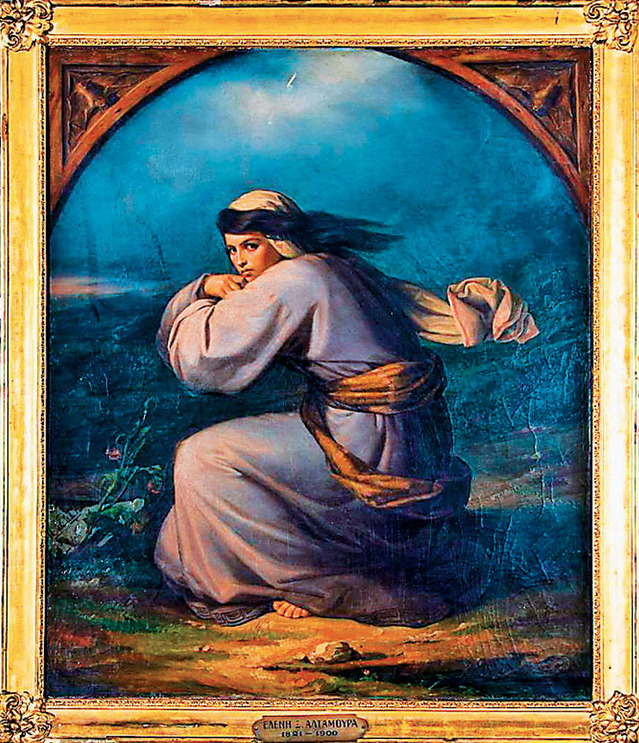 In 1857, following her divorce, Eleni returned to Athens with her two older children and earned her living giving private painting lessons to young women, among which Queen Olga. From 1862 to 1868 she was a drawing teacher for the Arskakeio Girl School boarders. She gained artistic recognition, as is evidenced by her appointment as member of the examination boards at the School of Arts in 1865 (together with Alexandros Rangavis) and 1869 (along with architect Ernst Ziller). She was also appointed as a consultant for the jury of the second "Olympia" exhibition (1870), along with Greek master Nikephoros Lytras.

Eleni’s eldest son, Ioannis (Giovanni) Altamouras, would soon also show inclination towards painting. In 1871-72, he was enrolled at the School of Arts (the predecessor of the Athens School of Fine Arts), studying under Lytras, while from 1873 to 1876 he continued his studies he continued his studies at the Royal Academy of Fine Arts in Copenhagen on a scholarship granted by George I of Greece (who was of Danish origin). 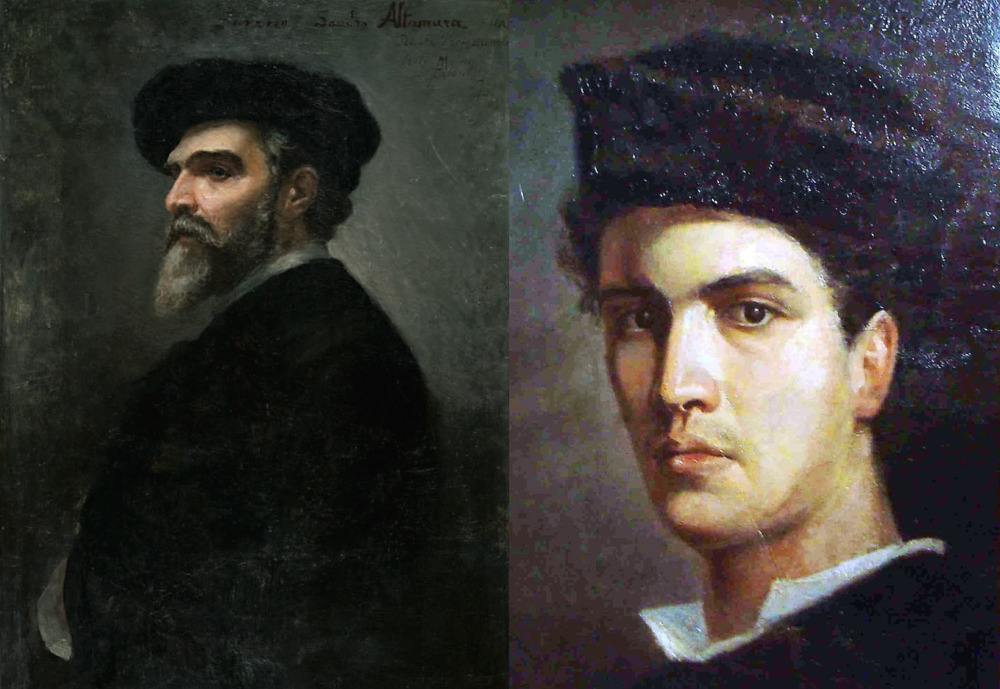 In 1872, her daughter Sofia was diagnosed with tuberculosis; Eleni took her to live on her home island of Spetses, hoping that this would help her ailing health. However, Sofia died at the end of the year, at the age of 18, leaving her mother inconsolable. After her death, Eleni returned to Athens.

In 1876 her son Ioannis returned to Greece, after having completed his studies in Copenhagen. He settled in Spetses, and distinguished himself as one of the most accomplished Greek seascape painters in his time. Several of his paintings survive to this day, depicting scenes from both Denmark and Greece. He was, however, also suffering from tuberculosis; he would eventually die in Spetses in 1878.

The loss of her children is believed to have caused Eleni a nervous breakdown from which she never truly recovered. It is said that at the age of 60 she returned to Spetses and burned all of her works which she had kept. She would continue living a secluded life on the island, where she would die in obscurity on 19 March 1900.

Eleni Boukoura - Altamura was buried in Spetses, but was later exhumed by her living relatives, and her remains, along with those of her children, Sofia and Ioannis, were transferred to a family grave at the First Cemetery of Athens. Her tragic life inspired the novel Eleni, or Nobody (19) by Greek author Rhea Galanaki, which was later adapted into a play (Eleni Altamura by Kostas Asimakopoulos). 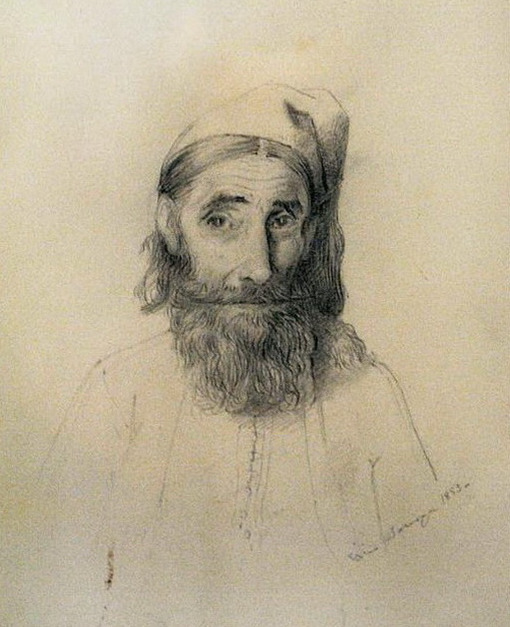 Very few of her works survive today. Besides those destroyed by her own hand, others were lost to a flood while kept in a storeroom, while some are believed to have been stolen or destroyed by relatives or other people following her mental breakdown and her death. A few paintings, drawings and busts are today found mainly in private collections of her relatives’ descendants.

Source (in Greek): Dora Markatou "Eleni Boukouri-Altamura, A contribution to the study of her life and work"