The Hellenic Parliament is dynamically participating in the events for the 200th anniversary of Greece’s Independence War with the exhibition "Beholding Liberty! At the Hellenic Parliament, two centuries later" which was inaugurated in the presence of the State’s leaders, the representatives of the Parliament’s political parties, the Archbishop of Athens and All Greece, as well as foreign missions’ representatives in Greece.

As indicated by its title, the exhibition – co-curated by Art Historian -Curator of the Hellenic Parliament Art Collection, Dr. Theodoros Koutsogiannis and Linguist- Head of the Parliamentary Library Department, Dr. Maria Kamilaki- focuses on the notion of liberty, as the supreme asset of the 1821 Revolution.

“From the Greeks of old whose dying
brought to life and spirit free,
now with ancient valor rising
Let us hail you, oh Liberty!” The aim of this “exceptional” exhibition– in the words of Greece’s President, Katerina Sakellaropoulou - is to highlight the key military, political and diplomatic events of the Greeks’ Struggle for Independence while reconstructing the symbolic significance of this anniversary for the Greek people. The show unfolds in the two most monumental areas of the Hellenic Parliament’s Building: the Colonnaded Lobby (“Peristyle”) of the Plenary Hall and the “Eleftherios Venizelos” Hall (former Trophies and Adjutants Rooms).

More specifically, the Peristyle, situated on the ground floor of the Parliament megaron (outside the Plenary Room of the Parliament), is the first exhibition area, which serves as a conceptual introduction. There is presented the «Awakening of Hellenism» (1770-1820), that is the situation of the Greek area and world in the pre-revolution period, putting emphasis on two special aspects of the progressive route to the Revolution of 1821, a) the outside testimony about Greece, given that the antiquarian foreign travelers in the Greek area, through their recordings in visual artworks and illustrated publications, are those who make known to west Europe the demand of the Neo-Hellenes for freedom, shaping thus a first philhellenic trend. And b) the Neo-Hellenic Enlightenment and the contribution of its representatives to patriotic awareness. 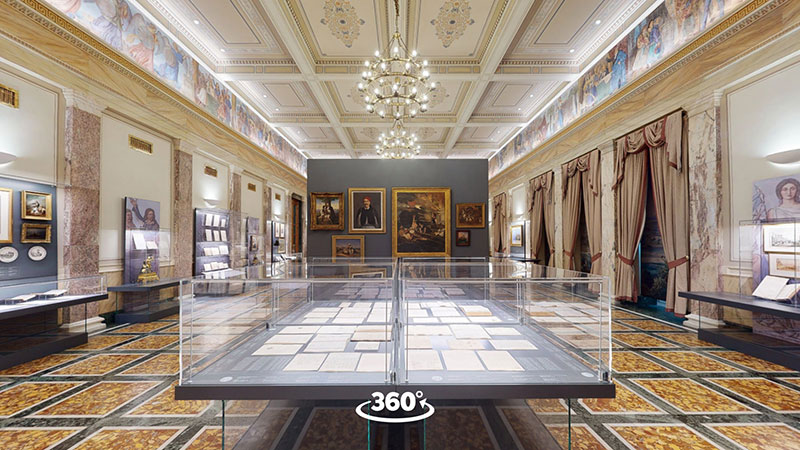 In the impressive Hall of the Trophies prevalent is the monumental painted frieze with scenes of pivotal military and diplomatic events of the revolution period, which provides the narrative “canvas” of the exhibition: six main units and two additional ones on specific themes document visually and textually the representations of the Frieze in chronological order (1821-1833) and integrate them into their wider historical context. In the adjoining smaller Hall of the Adjutants, visitors are welcomed by 14 fighters-pioneers of the Greek Revolution, who function metonymically for all the eponymous and anonymous heroes, military men, and politicians, local and expatriates, Greeks and Philhellenes, men as well as women who threw themselves with self-denial in the Struggle.

In total, 34 themes from monumental murals are presented, along with 367 unique exhibits of various categories: manuscripts, books, paintings, engravings, sculptures, decorative artwork – philhellenic plates, vases, clocks – musical score sheets, and weapons. The majority of the exhibits come from the Parliament’s Library and Art Collection, the collection of Michalis and Dimitra Varkarakis, the Averoff Museum in Metsovo, as well as other private collections. Moreover, it is worth noting that the 18th century “School of Athens” tapestry has been offered as a loan from abroad, with the kind consent of the President of the French National Assembly, as well as an emblematic painting depicting Lord Byron in Messolonghi from Trevizo, Italy.

“The School of Athens symbolizes our commitment to Democracy, it reminds our Western Democracies of everything they owe to Greek Democracy” Guided tours of “Beholding Liberty! At the Hellenic Parliament, two centuries later” exhibition take place every Monday, Wednesday, and Friday at 11.00 and 15.00, as well as every Sunday at 12.00, while a virtual tour is also available.