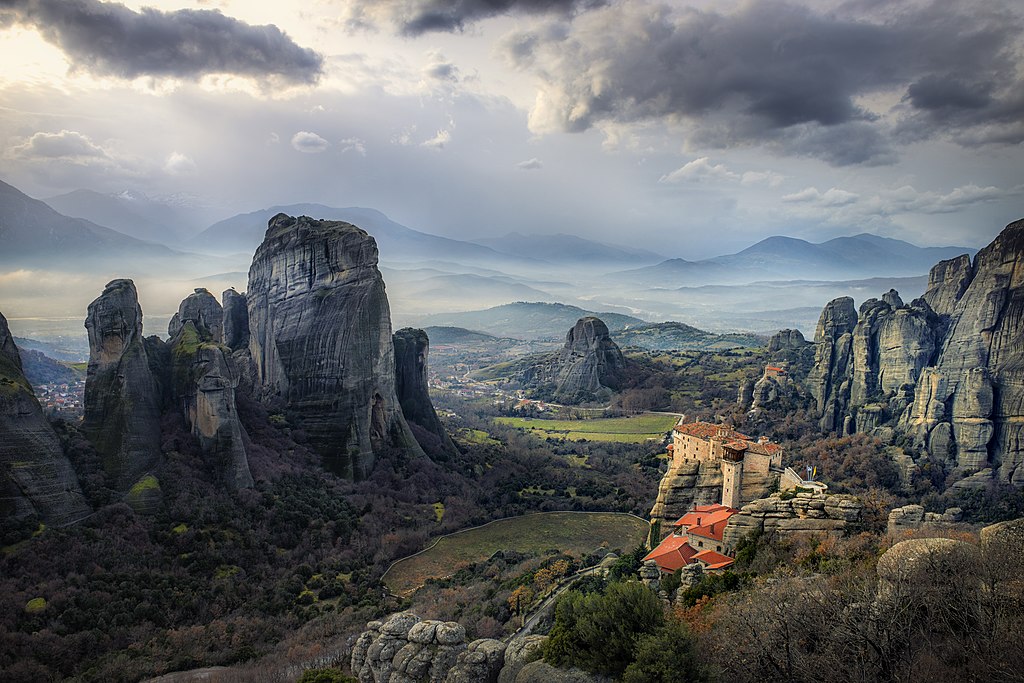 The region of Meteora is one of the most breathtaking natural formations that can be found in Greece; what makes it even more impressive is the historic medieval complex of monasteries built on top of the towering boulders that dominate the area. The site has been inscribed on UNESCO’s World Heritage List since 1988.

The region of Meteora is located on the northwestern boundary of the Thessalian Plain, close to the Pindus mountain range; this area is called the Mesohellenic basin, an intermontane tectonic depression of Oligocene–middle Miocene age, filled with sediments from that period, which have been covered by sediments from later periods.

The rock spires owe their existence to ten critical geologic episodes spread over a period of nearly a billion years. The boulders consist almost entirely from pebbly sandstone and conglomerate of the Oligocene and Miocene and, in a small part, of coarse-grained sandstone. The average elevation is 313 metres, with some boulders reaching a height of over 400 metres.

The place’s name is the neutral plural of the Greek adjective meteoros, meaning something that hovers or hangs above the ground; it is not found in ancient sources, and is believed to have been given to the area by the founders of the first monasteries in the area, probably Saint Athanasius "the Meteorite".

Panoramic view of Meteora, with the Monastery Varlaam in the foreground (photo by Danimir via Wikimedia Commons)

The striking buildings, hosting Greece’s second most important monastic community (surpassed only by that of Mount Athos), only add to the site's majesty. Even more astonishing is the fact that these monasteries were built in the Middle Ages, despite the great difficulties posed by the challenging terrain.

The first monks to settle on the remote rock tops were hermits, probably since the eleventh century, although there are reports of at least one ascetic monk, called Varnavas, dwelling there in the tenth century. Each of the original hermits lived in isolation, in caves around the area, and met only sporadically, for liturgical services. The oldest known (and still surviving) building in the area was the chapel of Doupiani or "Stagon", believed to have been established by a monk named Nilos around the 12th century, on the foothills of a low rock, so the hermits could gather for Sunday prayers. 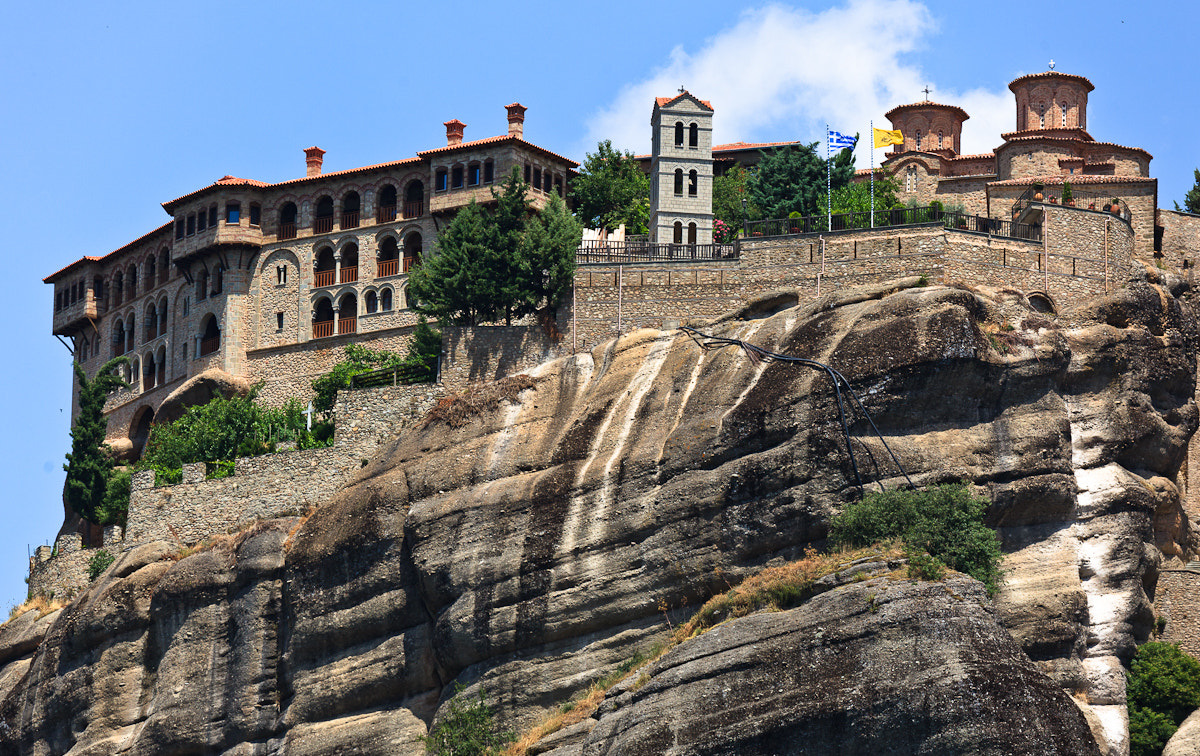 The "Great Meteoron" (photo by Roman Lysogor via Wikimedia Commons)

The first monastery was built in the 14th century by Athanasius "the Meteorite", who is believed to have given the area its name. The Holy Monastery of Transfiguration of Jesus, mostly known as the "Great Meteoron", is the not just the oldest but also the largest one, built on the highest rock of the region, at a height of 535 metres.

Other monasteries were founded in the following years, and by the 16th century the complex included 24 friaries and convents, of which six are still in operation today. The rest of the monasteries are now are uninhabited and mostly in ruins, although a few are well-preserved, such as the impressive Monastery of Ypapanti, the location of which brings to mind the historic Sumela Monastery in Trabzon. For centuries, most of the monasteries were only accessible through a system of winches and rope pulleys, which offered monks security against brigands and pillagers. In the early 20th century, staircases and pathways were carved into the rock formations, making them more easily accessible. 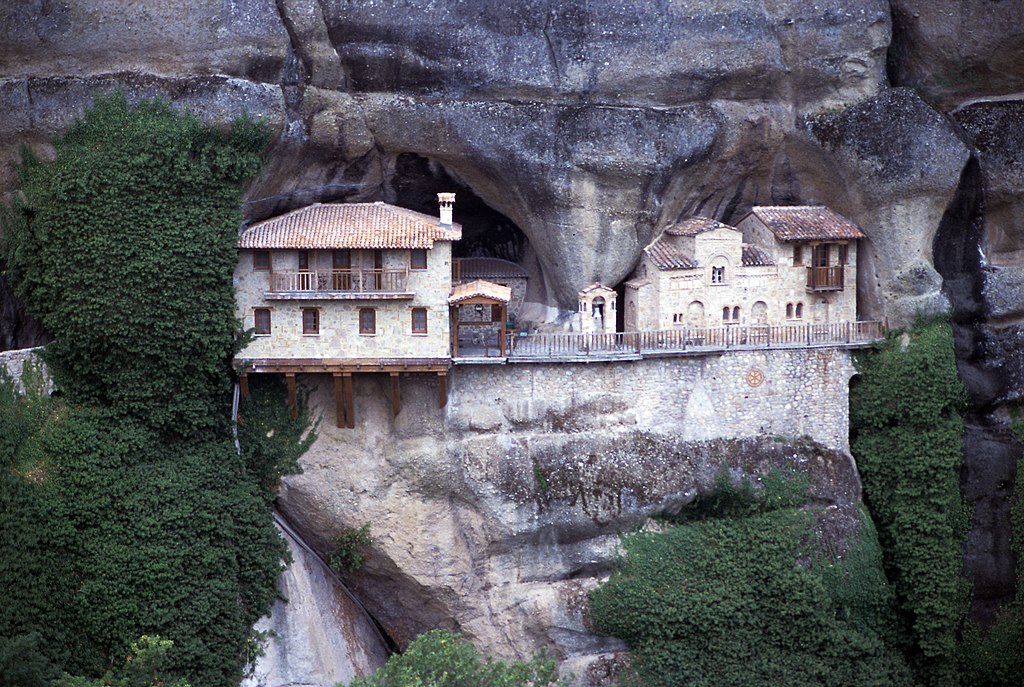 Besides the "Great Meteoron", the surviving monasteries are:

The awe-inspiring geological formation, as well as the remote monasteries perched on these rocks, have acquired international renown, and have appeared in various travel stories; in 2003, the successful rock band Linkin Park even released a music album Meteora inspired by the area’s epic dimensions.

Read also via Greek News Agenda: The historic Sumela Monastery in Trabzon; The spectacular Diros Caves; The Monastery of Saint John the Theologian and the Cave of the Apocalypse on Patmos; The medieval ghost town of Mystras

N.M. (Based on an article published on Punto Grecia; intro image: Panoramic view of Meteora rock formations with "Roussanou" convent in the foreground, photo by Stathis floros via Wikimedia Commons)