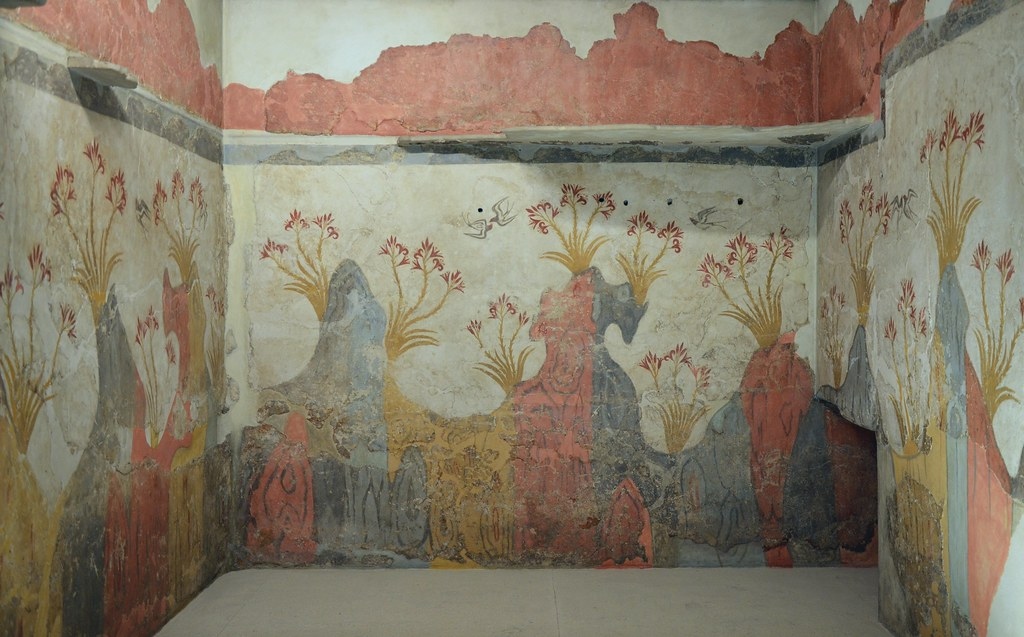 Santorini (officially named Thira, after its ancient Greek name Thera) is the southernmost island of the Cyclades; it usually figures high in international lists of the most beautiful and popular island destinations, but it is also one of the most important places for the study of geological phenomena and formations.

The Akrotiri area of Santorini is located at its south-western end, 15 km from Firá, the island’s modern capital. Its name means "cape" (in the sense of a headland or promontory) and it truly is one, standing on sheer cliffs stretching three miles west of the southernmost part of Santorini.

It was one of the most important centres of the Aegean in prehistoric times with the first settlements dating back to the Late Neolithic period (3500-3000 BC).

During the Middle and Early Late Bronze Age (20th-17th century BC), the settlement expanded and became one of the most important urban and port centres in the Aegean. Its vast area (approximately 200 acres), excellent urban organisation, sewage system, multi-storey buildings decorated with exquisite wall decorations, luxury furniture and household items are testament to its great development. 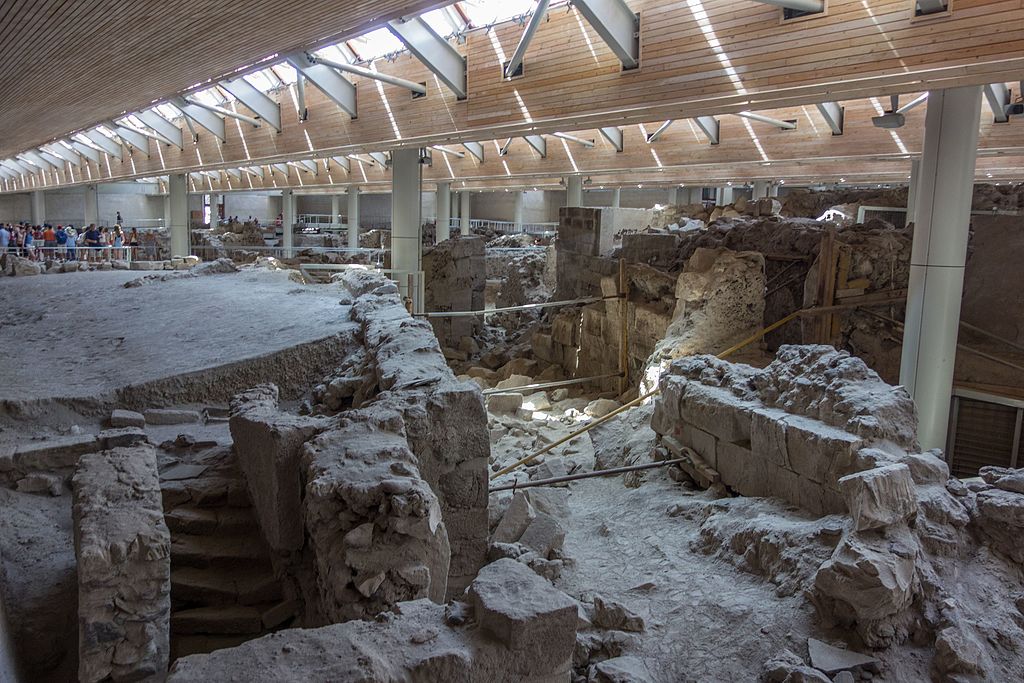 Akrotiri's network of foreign contacts was particularly extensive, as evidenced by the various imports found in the ruins of the buildings: it maintained close relations with Minoan Crete but was also in contact with mainland Greece, the Dodecanese, Cyprus, Syria and Egypt. Life in the city came to an abrupt end at some point in the late 17th century BC, when its inhabitants decided to abandon it due to strong earthquakes. What followed was a volcanic eruption of the greatest magnitude, around 1600 BC, known as the Minoan eruption of Thera.

The island was is believed to have been known, until then, as Strongyle ("circular") due its round shape; with the eruption of the volcano at its centre, a large part of it was submerged, creating the contemporary shape of Santorini. The volcanic materials covered the city and the entire island, protecting the buildings and their contents to this day, as would later happen in Pompeii.

A visit to the archaeological site of Akrotiri on Santorini is a true journey back in time. Buildings and objects trapped under a thick layer of volcanic material have been preserved intact or have left their imprint. Solidified ash has covered the ruins of the settlement, keeping alive the images of a civilisation destroyed by the volcanic eruption. Their exceptional preservation impresses visitors today and has rightly given Akrotiri the name 'Pompeii of the Aegean'.

Evidence that Akrotiri had been inhabited during the prehistoric era began to come to light in the second half of the 19th century. It was, however, only in 1967 that systematic excavations began, under Professor Spyridon Marinatos, with the support of the Archaeological Society of Athens. After Marinatos's death in 1974, excavations continued under the direction of Professor Christos Doumas. The uncovered monuments have not undergone any interventions, other than those that are necessary for their arrangement and the salvage of the various finds. The monuments and architectural complexes in the area stand out by their craftsmanship and elegance.

The most important sites are decorated with frescos of a high artistry, usually depicting religious scenes and ceremonies or scenes from nature. The impressive frescoes, which are the oldest examples of monumental painting in Greece, decorated almost every building complex, providing valuable information about the society of Akrotiri. 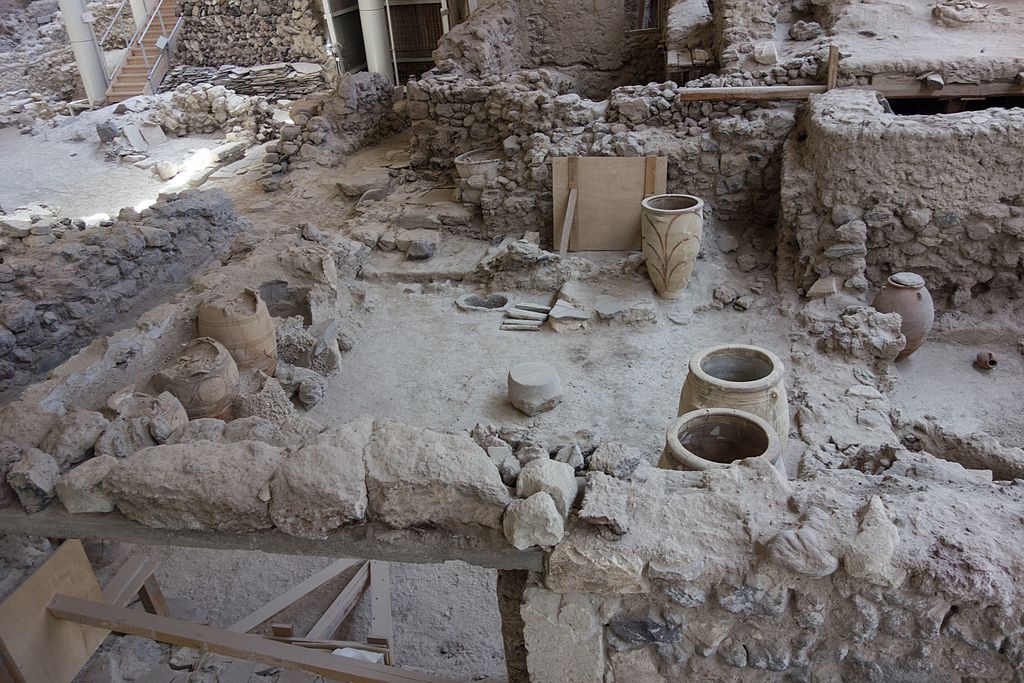 The settlement's ceramics are distinguished by their richness and variety of decorative forms and themes. Covered in volcanic ash, the vases and other everyday objects were saved in surprisingly good condition. They thus provide information on their use, practical or ritual, and on the organisation of life within the buildings.

The buildings of Akrotiri are unique examples of impressive architecture; public buildings were adorned with majestic, sculpted facades; private houses were also equipped with workshops and warehouses.

Building materials came from the island itself or were imported from other areas: rocks and pebbles were collected from its quarries to be used on walls and floors, wood came from Crete and was used as seismic reinforcement while plaster slabs came from the quarries of Cnossos. 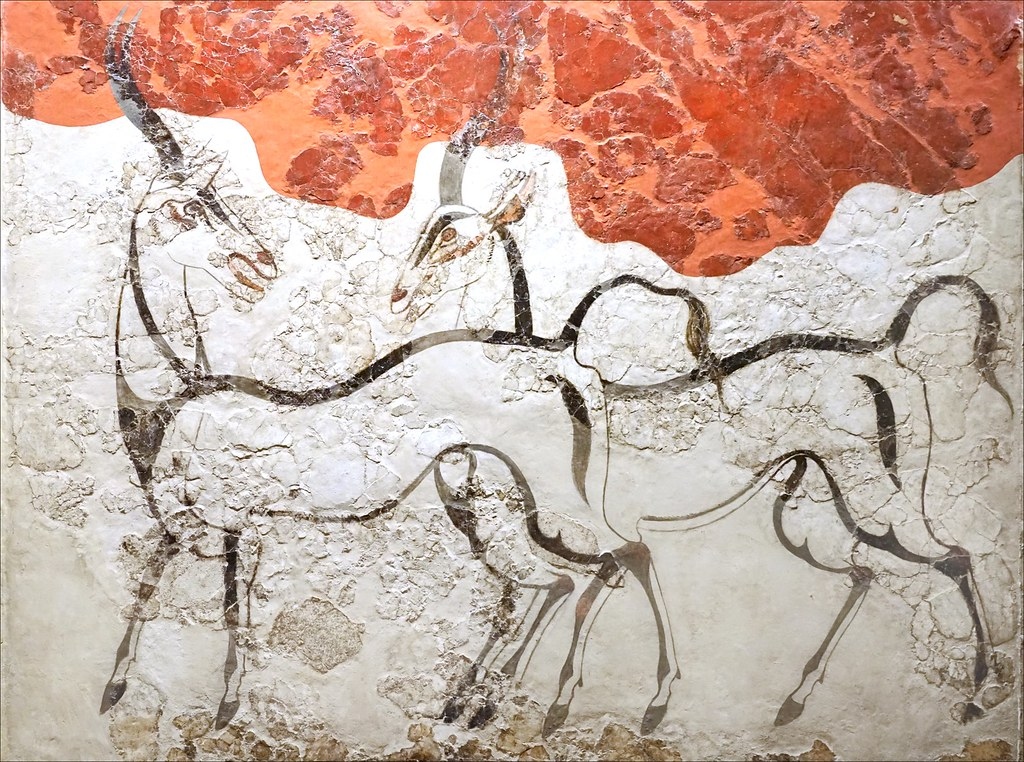 "Xeste 3" is a large building of at least two storeys with 14 rooms per floor, and it features the famous Saffron Gatherers fresco. The architectural features of the building and the themes of the frescoes lead to the conclusion that ceremonies were held there.

"Section B" probably comprises two separate buildings attached to each other; here we find the Antelopes, Boxers and Monkeys frescoes.

The "Western House" is a relatively small but well-organised building with food stores, workshops, a kitchen and a mill. In addition, we find a storeroom of tools and food, a toilet, and a series frescoes: of the Fishermen, the Priestess, the famous miniature Ship procession fresco. 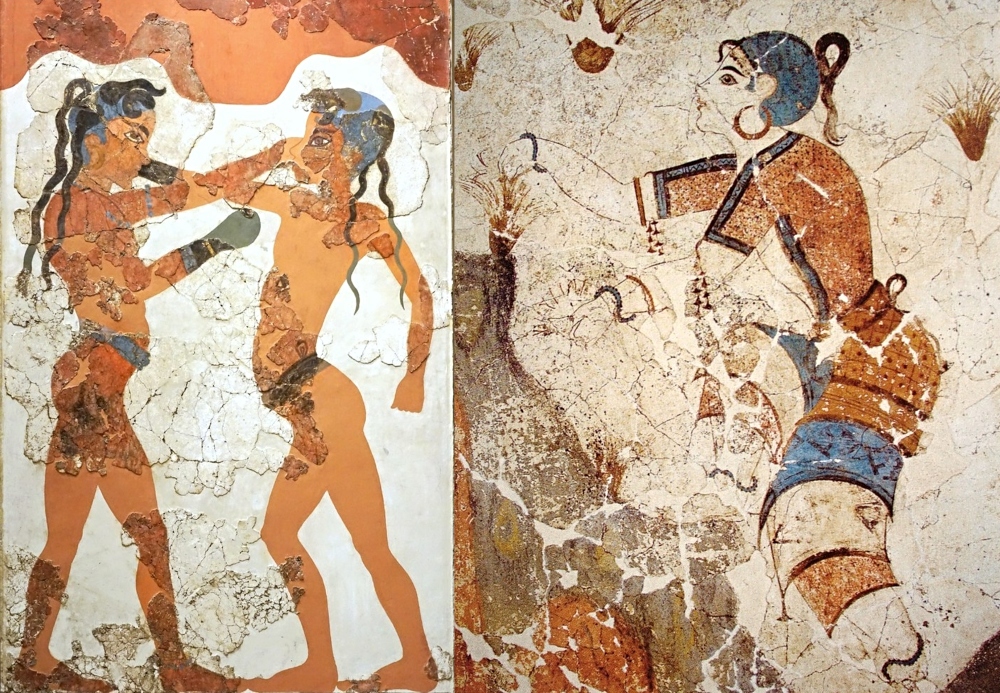 "Complex D" consists of four buildings with the Spring mural, signs of Linear A writing and large movable artefacts, such as abundant imported ceramics and objects made of precious stones and metal.

The "House of Ladies" is a large two-storey building with a skylight in which the fresco with the Ladies and the Papyrus fresco were found.

"Xeste 4" is a majestic three-storey building, the largest excavated so far, probably used as a public building, as evidenced by its unusually large size, imposing exterior and a mural of Offering-bearers. 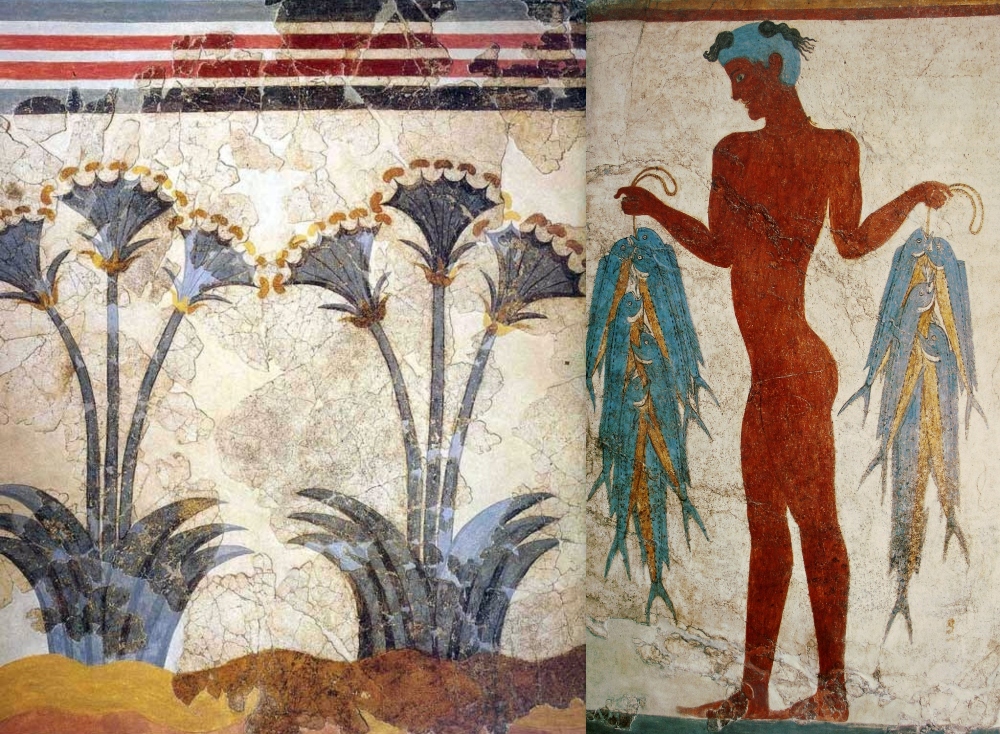 The Museum of Prehistoric Thera houses finds from the excavations at Akrotiri; it traces the course of Thera’s history in prehistoric times; the exhibition is structured in four units, referring to the history of research at Thera, the geology of Thera, the island's history from the Late Neolithic to the Late Cycladic I periond (early 17th century B.C.) and the heyday of the city at Akrotiri (mature Late Cycladic I period, 17th century BC).

The museum can be considered an extension of the archaeological site of Akrotiri, as it houses the frescoes and mobile artefacts from this urban centre during the period of its great prosperity (17th century BC).

At the same time, it houses artefacts from many other places in Santorini that date from the 5th millennium B.C. (Late Neolithic) to the 17th century and show the passage of various civilisations from the Aegean over a long period of prehistory. 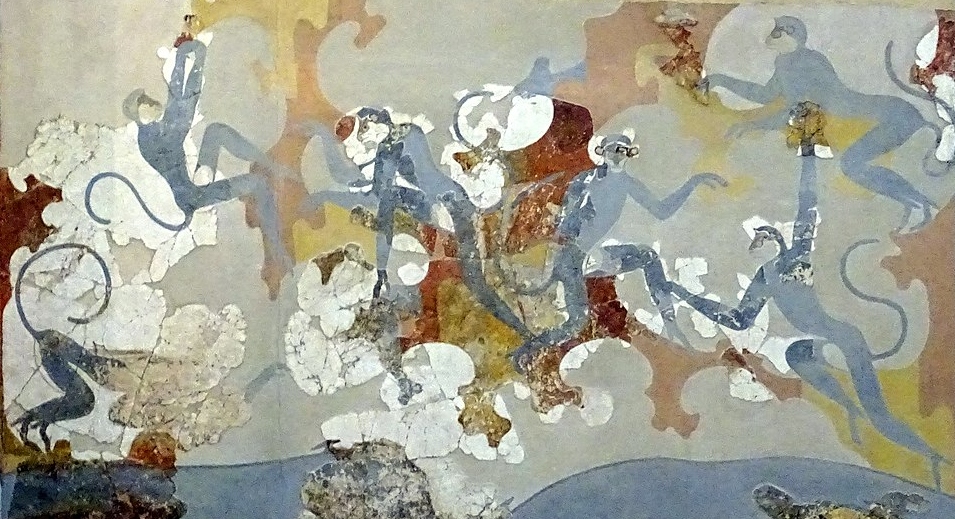 Detail from the Monkeys fresco found in Akrotiri (Museum of Prehistoric Thera, photo by Ad Meskens via Wikimedia Commons)