Greek News Agenda pays tribute to the renowned Greek visual artist George Lazongas who died at the age of 77 earlier this month. His work is currently exhibited at the National Archaeological Museum in Athens; in fact, the show entitled “The past is now. Lazongas: Myths and Antiquity” turned out to be the artist’s swansong exhibition.

Born in Larissa, George Lazongas (1945-2022) initially studied Architecture at the Aristotle University of Thessaloniki, but eventually devoted himself to painting. He presented his first solo exhibition in Thessaloniki (1975) and continued his studies in Paris with a scholarship from the French government. He presented his work in a series of solo shows and in more than thirty group exhibitions in Greece, Europe, Asia and the U.S., as well as prestigious events such as Europalia and the Sao Paolo Biennial.

Moreover, Lazongas taught at the Department of Architecture of the Aristotle University of Thessaloniki (1982-1999) and in 2008, he was elected Professor at the Athens School of Fine Arts, where he taught until 2012.

A primary feature in Lazongas’s work and artistic quest has always been the restructuring of form – a form that purposely does not lose the thread of communication with the initial shape/point of departure. In fact, right from the start in his early works Lazongas retrieved historical and mythological fragments to create new perspectives and conceptual narratives.

As the artist himself had put it: “the fragment is the work”, “the characteristics of a latent materiality are inherent in the traces” referring to the “medium that produces or provokes them.” 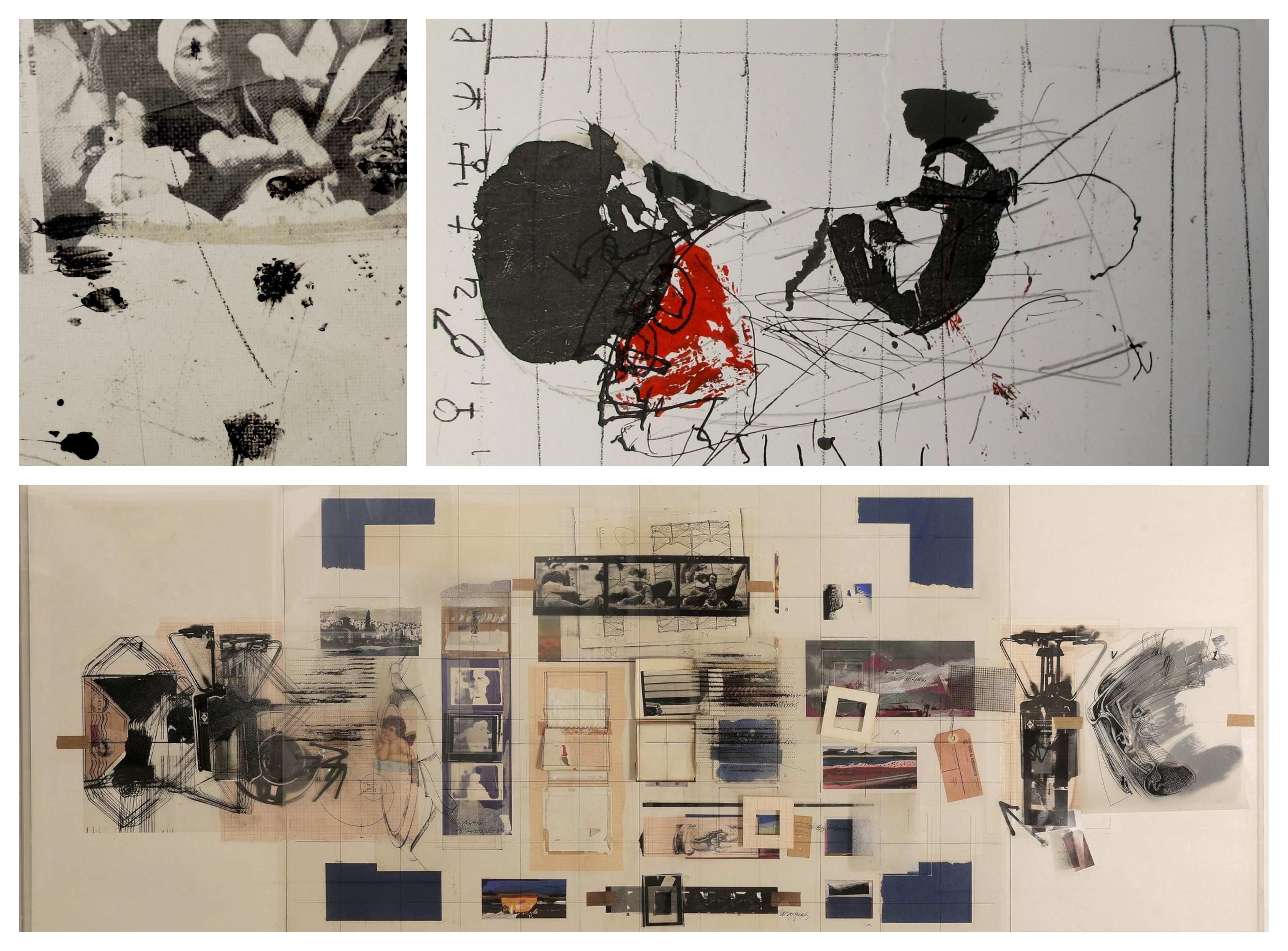 The trace, even if not constituting a faithful representation, is certainly a visual and hollow reminder of it. Everything between “before” and “now” are simultaneously absent and present. Thus, references to the past are transformed into enigmatic allegories of the present, and visual stories that unfold “in secret”, stimulating the viewers’ imagination and paving the way for new interpretations.

The show entitled “The past is now. Lazongas: Myths and Antiquity” - which was inaugurated in May 2022 at the National Archaeological Museum - turned out to be Lazongas’ swansong exhibition. Running through 20 August 2022, it is featuring a series of Lazongas’ paintings and drawings, inspired by ancient Greek history, mythology and art.

Thus, an intriguing dialogue between contemporary art and antiquity is conducted at Greece’s largest archaeological institution and one of the world’s most important museums devoted to ancient Greek art. 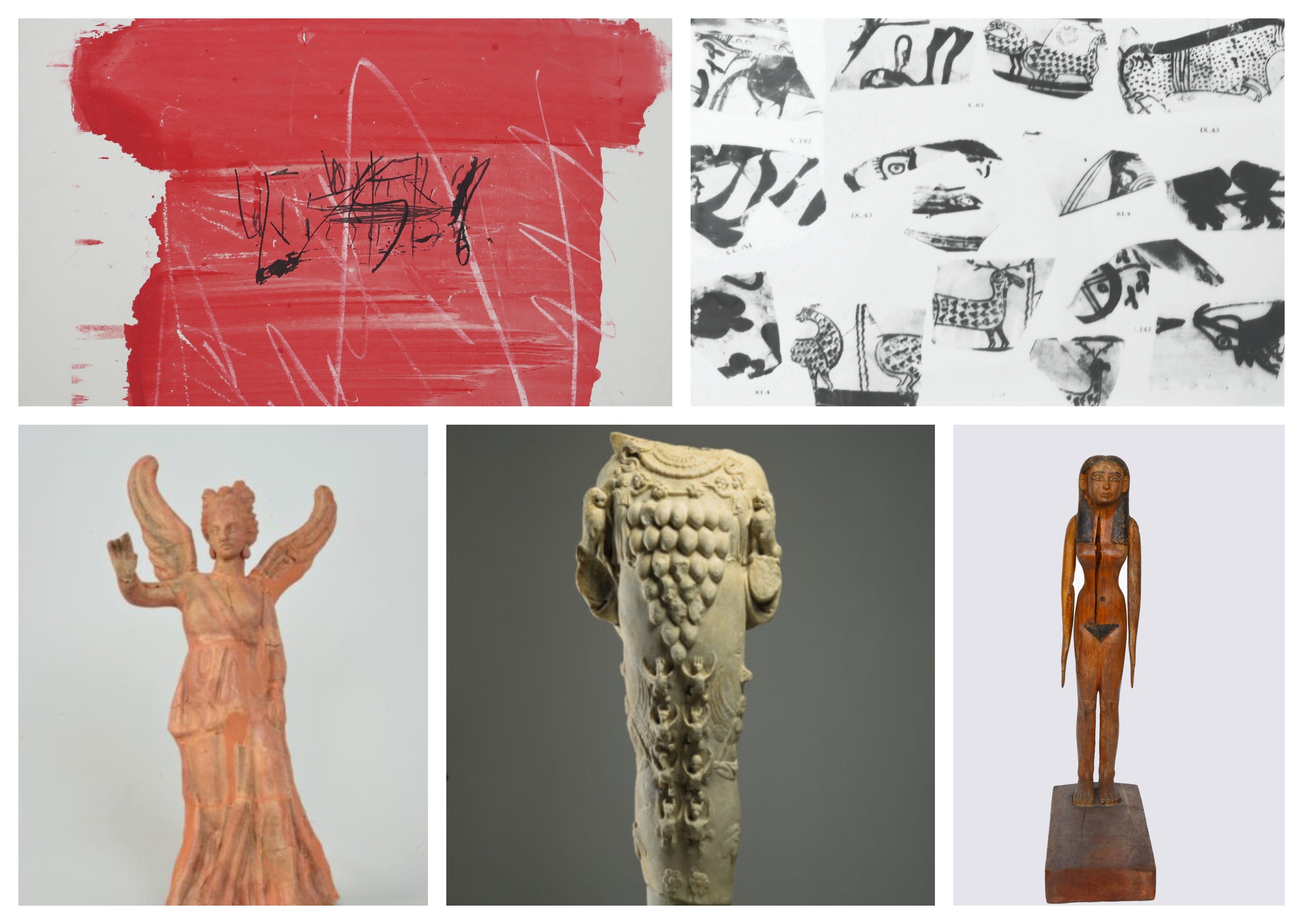 More specifically, 30 contemporary artworks created by George Lazongas are set beside 23 selected artifacts from the Museum’s permanent collection to demonstrate how the past continues to shape the present. The exhibition is divided into three thematic sections, all of which constitute “palimpsests” of time, a concept that Lazongas introduced to the terminology of local art history in the 1970s to describe the layering of the image at different moments in time:

a) Mediterranean escapes: this section includes some of the Museum’s artworks from Greece, Cyprus, Egypt and Italy, which highlight the cultural dynamics of the ancient Greek spirit; in combination with Lazongas’ sketches, it demonstrates the cultural interactions among the peoples and the multicultural nature of the Mediterranean region. Central, in this section, is the role of the “Nike/Victory” series inspired by the Nike (Winged Victory) of Samothrace; the ancient statue is deconstructed and reconstructed, taking the form of a contemporary emblem of a life and death symbol.

b) Fragments of memory: during the thrilling process of excavation, fragments of ancient images constantly come into light, completing and aesthetically reflecting the continuity of Greek history. In Lazongas’s work – and more specifically, in the series “Fragments-Shards” and “Columns” - the fragmentation of the image functions symbolically, catastrophe being a stage in the creative process, fully linked to the concept of rebirth.

c) Transformations of images: the Sirens - symbols of danger and devastation according to Greek mythology - become leading figures in Lazongas’ compositions, and mutate, in the course of time, into a new mythic figure: Baubo. By modifying an ancient prototype into a contemporary creation, the artist invents thus a new visual mythology, imbued with his own experiences.

The Past is Now. Lazongas: Myths and Antiquity (© Greek Ministry of Culture)