Validating progress on inintegrity and anti-corruption policies in public administration in recent years, Greece registered the greatest improvement in a new ranking of public integrity for the 28 EU Member States.

In the Index of Public Integrity (IPI), released recently (21.1) in a report by the Dutch Presidency of the EU, Greece ranked 20th with 4.34 points at an EU average of 5,71 but recorded the best public integrity gains by 1,5 points since 2012.  Overall, Finland scored best with 8.88 points and Bulgaria worst with 2,38. The ranking is based on six transparent indicators, strongly associated with existing corruption indicators and rely on aspects of red tape, transparency, judicial constraints, and social accountability. Greece noted similar significant improvement earlier this year in the Transparency International’s Corruption Perception Index for 2015 and launched an ambitious National Anti- Corruption Plan with the aim to co-coordinate anti-corruption efforts at a national level.

The Index of Public Integrity is part of the “Public Integrity and Trust in Europe" report, commissioned by the Dutch EU Presidency to the ANTICORRP project - lead by Professor Alina Mungiu-Pippidi from Berlin’sHertie School of Governance- within the scope of the ongoing international dialogue on strengthening evidence based integrity and anti-corruption policies for public administration.

Drawing on six transparent and quantitative indicators into one single aggregate index in order to assess a country’s overall level of public integrity in the EU-28 for 2012 - 2014, the IPI ranking represents the first objective measurement of public integrity. These indicators measure administrative simplicity (time to register a business and pay taxes), trade openness, auditing capacity, judicial capacity, e-services offered by the government and e-services used by the population. Unlike other indices based on perception, such as Transparency International’s Corruption Perception Index (CPI), the IPI’s indicators are objective, sensitive to policy reforms and allow comparison across time. 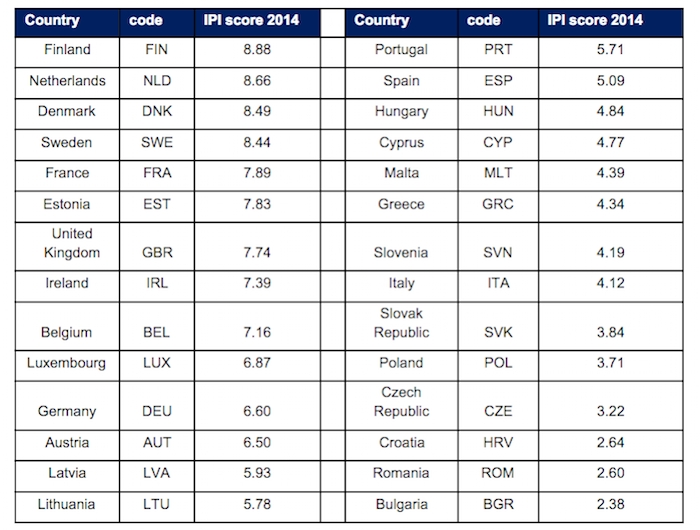 In addition to the IPI, the report also investigates the growing loss of trust in governments and national and European institutions throughout the EU-28, arguing that economic performance alone does not explain it. Report findings assert that citizens in many member states perceive a serious drop in the quality of governance, as well as the failure of current policies to redress it.

Few countries acknowledge that the success in either the public or private sector is based on meritocracy, and less than a quarter of Europeans agree that their government’s efforts intackling corruption are effective. The countries where citizens perceive higher integrity and better governance are those that managed to preserve high levels of trust in government despite the economic crisis, the report notes.