Greece as "The island that sails away"

Professor George Pagoulatos, advisor to two Greek Prime Ministers between November 2011 and June 2012 and one of the most prolific commentators of the crisis in Greece,  has gathered 122 of his articles published from 2007 to 2015 in a recently published book titled “Το νησί που φεύγει” (“The island that sails away”). The title of the book refers to a “Greek-Balkan” perception of the world, as depicted in the surrealist ending scene of Emir Kusturica’s Film “Underground”: while all the characters are celebrating a wedding, the small piece of land they are on breaks away and drifts into the sea.  The risk of Greece breaking away from the European corpus is among the main topics of the book. Pagoulatos was a supporter of “YES” in the referendum of summer 2015, while he considers the 3rd Memorandum as a failure of the current SYRIZA government, which has been so far inadequate in bringing forth the necessary reforms.

The author divides the articles into five chapters placed in chronological order and describes them as such: “The first part highlights domestic failures, the reform inertia and chronic complacency that made Greece defenseless against the coming crisis. The second part covers the period from early 2010 to early 2011, when the painful dilemmas emerge under the threat of catastrophic bankruptcy and the reality of a country in Memorandum emerges. The third part extends from February 2011 until the end of the summer of 2012, with the country mired in its deepest recession and society was given over to furious reactions and despair. The fourth part monitors the short-lived stabilization by the formation of the tripartite Samaras government, until the first signs of a slight recovery. The fifth and final part covers the period of SYRIZA government, its arrogant expectations, the erratic negotiations with the institutions, the nightmarish referendum, the panicky capitulation and the signing of the third Memorandum.”

The articles of the anthology reflect the spirit and political and social climate of each period of crisis, as it was experienced by the writer in his various capacities: as an academic researcher, as a commentator, as a teacher, but also as strategic planning director and advisor to two Greek Prime Ministers (Loucas Papademos and Panagiotis Pikrammenos). Overall, the book is a concise record and critical analysis of the structures, choices and omissions - of  both the Greek governments and the Eurozone - that led the country after the international crisis of 2007 to bankruptcy and finally to the three consecutive Memoranda.  According to the editor’s note, "The island that sails away" can be read as a chronicle of the agonizing course of Greece during the crisis, as an essay on national self-awareness, or as constant search for hope in a bleak backdrop”.

Bringing together politicians of the “reformist center”

The book was presented in the Amphiteather of “Athens 9,84“ radio station on 21.11.2016 with the participation of politicians from the wider centrist political spectrum, like the leader of the right-wing main opposition party New Democracy Kyriakos Mitsotakis, the head of the centrist party Potami Stavros Theodorakis and ex-president of PASOK Evangelos Venizelos. 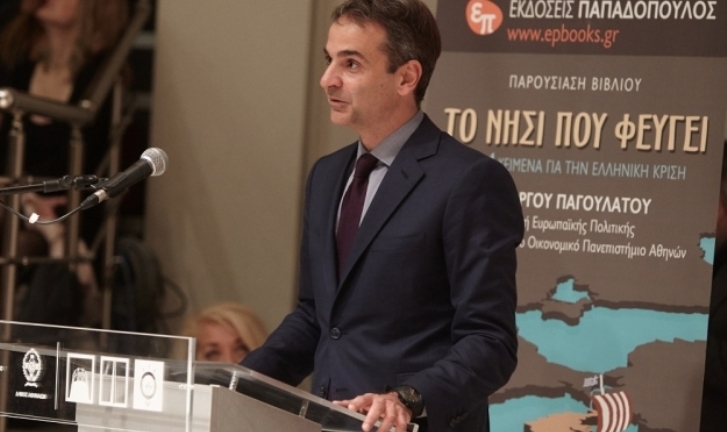 In his speech, Kyriakos Mitsotakis spoke of the common values ​​of the "pro-European"/reformist front, which are expressed in the book. The texts are characterized by "consistent liberal thought," and "reformist estrus", Mitsotakis said, while at the same time, they highlight the structural weaknesses of the Eurozone. It should be noted in his recent interview with Boston's National Public Radio News Station Mitsotakis said that “austerity measures have been pushed too far and  part of the responsibility should be placed on Greece’s creditors” specifying however that “if we have to convince our creditors on a looser fiscal policy we have to keep our end of the bargain for reforms in the economy and public administration, changes that Mr. Tsipras and his government are not able to deliver upon.”

Stavros Theodorakis talked about the central theme that emerges from the book: “a strong Europe, an innovative open public university, the fear of the collapse of the middle class and the battle against the "monster of anti-memorandum hysteria."

According to Evangelos Venizelos, the book is an opportunity to remember "the actual chronology of the crisis" and proof that a fourth memorandum is "inevitable for the recovery of the economy. Venizelos insisted that the "politically defeated SYRIZA" should call for elections and participate in a national unity government.

Professor George Pagoulatos himself talked about the "amoralism thread" linking "international demagogues." The lesson from their emergence, he said, is "not to forget the common man, but not feed him with lies and conspiracy theories." But in addition, he stressed, we should not promote the narrative of victimization - which he said, is "part of the decline" of the country and sometimes expressed "a top state level". "We are among the world's lucky peoples," said Pagoulatos, "foreign powers often helped us, we made a lot of mistakes, but usually, when it comes to major strategic decisions, we choose correctly." But our luck could run out, he noted, "we felt as much during the nightmare that was the summer of 2015.”

The basic argument of the book could be summarized in a phrase from the latest article of Pagoulatos in Kathimerini daily (27.11.2016): "the inexhaustible strategic horizon of the country has always been Europe and the West". According to Pagoulatos, last summer, Greece was “the island” that was moving away from Europe, but now, another island, the UK, has left Europe for real. Just when Greece had managed to tie its ship to the pier, the pier itself seems to be shaking. This is why, Pagoulatos concludes, it is imperative that Greece maintains its enthusiasm for the ideal of Europe, especially when the bigger European countries are losing their own enthusiasm.

George Pagoulatos is Professor of European Politics and Economy at the Athens University of Economics and Business and Visiting Professor at the College of Europe in Bruges.