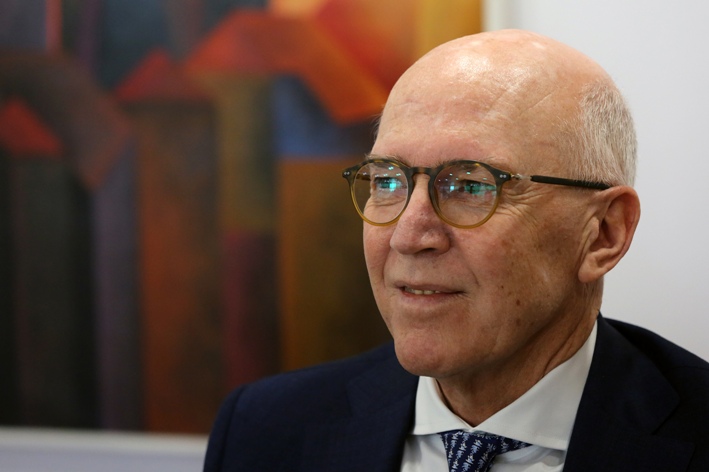 Panagiotis Roumeliotis is a Greek economist, academic, banker and politician. He has served as Minister of National Economy (1987), Minister of Commerce (1987-89), Member of the European Parliament for PASOK (1989-94). Throughout the 1990s and 2000s he held various positions, such as Special Representative of the Council of the European Union for the stability process in the Balkans and from March 2010 until December 2011 he was Greece's representative at the International Monetary Fund. Right now he is the President of Attica Bank.

In his interview to Greek newspaper “To Vima” (An agreement on debt is necessary for Grece to exit the crisis, 28.05) Panagiotis Roumeliotis estimates that if the necessary reforms are launched, and the measures for the sustainability of Greek debt are determined by mid-June, Greek economy can return to growth rates of 2% this year and 3% in 2018. In relation to the future of Attica Bank, Mr. Roumeliotis emphasized that the aim of his administration is for Attica to become the bank of small and medium-sized enterprises, with a focus on financing key sectors and in extroverted activities of the economy.

With the completion of the review of the adjustment programme, a long period of uncertainty for the Greek economy is coming to an end. Institutions and analysts, however, have downgraded their estimates on growth. What is your assessment?

The seven-year recession cycle will undoubtedly close upon the expected agreement with the institutions on 15 June, which will include measures for medium-term debt sustainability. The economy is expected to recover with a GDP growth of about 2% in 2017 which may reach about 3% in 2018. This optimistic outlook will be achieved if Greece takes advantage of the existing positive climate, implements the reforms that have been decided and if the institutions reach an agreement on Greek debt by June 15.

How do you think the debt issue will work out?

I believe that much progress has been made in the discussions between the IMF and the Eurogroup on this issue. Everyone now recognizes that in order for the IMF to continue to participate in the programme, our European partners must take due account of the Fund's statute. The IMF’s statute does not allow it to finance countries whose debt is not sustainable in the medium term. The IMF has circumvented -under the pressure of Europeans- this principle in 2010, and is not prepared to repeat this mistake now.

On the one hand, Europeans, and especially Germany -for political reasons, seek to delay the decisions on debt or debt restructuring. Thus, they have blocked the solution of a haircut on Greek debt and are pushing for ambitious targets on primary surpluses (3.5% of GDP) for the longest period possible. On the other hand, the IMF, based on its experience, considers it impossible to achieve high primary surpluses over a period of more than 3-4 years. Also, the IMF’s projections for Greek GDP growth are less optimistic than those of Europeans. Overall, four technical solutions are currently on the table […] but I would like to emphasize that at the end of the day the issue is not which technical solution is best. The issue is that Germany and the hard core of the  Eurozone do not want an agreement on debt  that could be interpreted as a relaxation of the rules of budgetary discipline that are applied today, and that Mr Schäuble takes a hard line on Greek debt for domestic political reasons.

Finally, we should mention that debt easing is an essential precondition for Greece to regain access to international markets and to be able to gradually refinance its debt at low interest rates.

What do you think went wrong and Greece needed seven years to exit the memorandum programmes?

The sustainability of Greek debt was not immediately addressed, and for that reason an unprecedented fiscal austerity was imposed, which led the economy to a deep and prolonged recession and to high unemployment. Also, the delay in debt restructuring -with the PSI- and the fact that the memoranda were not offset by a brave investment plan. Unfortunately, external borrowing has been used to serve the ever-increasing public debt and not for new investments. And of course, the delays in launching reforms in the public as well as in the private sector, due to long-established incumbent interests have prevented a timely restructuring of the Greek economy.