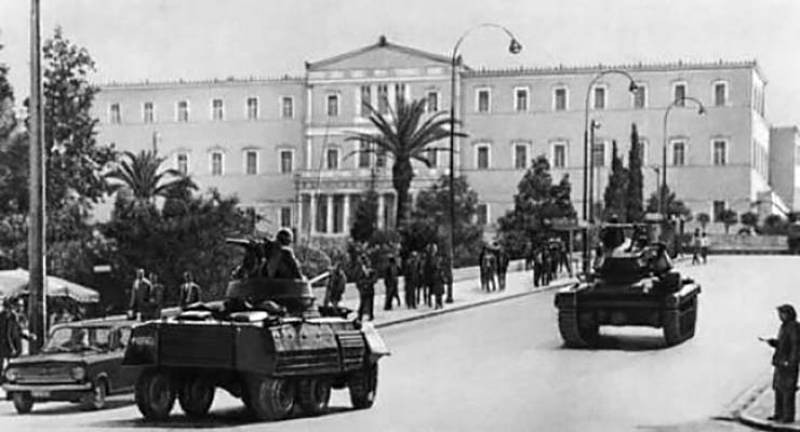 24 July 1974 is one of the most important days in Modern Greek history, as it marks the restoration of democracy after seven years of military dictatorship. The coup d’état of 1967 resulted in a long period of fear, persecutions, encroachment of personal and political rights, distrust and instability. Every year, the day of the Restoration of Democracy is celebrated with a reception held at the Presidential Mansion in Athens.

The factors that contributed to the establishment of the military junta were both internal and external reflecting the geopolitical position of Greece: Economic problems, low national income, lack of investments. Additionally, the growing international concern over communism and the tensed relations between Greece and Turkey, after the independence of Cyprus from the British in 1960, were among the key factors that encouraged colonels to establish a regime that that they purported would “save Greece” from an supposed “communist coup” and establish a “Hellenic - Christian” ideology.

During the seven years of dictatorship there was a growing resistance both from groups with international ties as well as democratic European governments, that led to the downfall of the dictatorship. In 1973 the military junta leader Georgios Papadopoulos undertook a "liberalisation" process of the regime, which included the release of political prisoners and the partial lifting of censorship, as well as promises of a new constitution and new elections for a return to civilian rule.

One of the first acts against the junta was King Constantine’s counter-coup. In December 1967, the King tried to overthrow the illegitimate regime with the support of the army and the navy. Since Athens was militarily in the hands of the colonels, Constantine decided to fly to the small northern city of Kavala, where he hoped to be among troops loyal only to him. Due to lack of support, inability to broadcast the announcement of the coup in major centres, such as Athens and Thessaloniki, and lack of confidentiality in the planning process, this effort to overturn the military regime failed, resulting in Constantine’s self-imposed exile.

Since the very beginning of the establishment of the military regime, the democratic elements of the Greek society formed militant groups promoting the return to democracy. These included, among others, the Panhellenic Liberation Movement, the Democratic Defense, the Socialist Democratic Union, as well as the Communist Party of Greece. The internal resistance led to the involvement of international bodies, such as the Council of Europe, the members of which became aware of the torture, and the lack of civil rights in Greece. The first armed action against the junta was the failed assassination attempt against George Papadopoulos by Alexandros Panagoulis, on 13 August 1968. Many people were arrested and exiled because of their anti-junta activities. Among them there were prominent figures such as Mikis Theodorakis and Melina Merkouri.

The funeral of Georgios Papandreou on 3 November 1968 spontaneously turned into a massive demonstration against the junta. In March 1969, the famous Greek poet Giorgos Seferis, recipient of the Nobel Prize for Literature in 1963, made a statement against the military regime on the BBC World Service, copies of which were simultaneously distributed to every newspaper in Athens.

In an anti-junta protest, on 23 May 1973, HNS Velos, under the command of Commander Nikolaos Pappas, refused to return to Greece after participating in a NATO exercise, as it remained anchored at Fiumicino, Italy. This act of defiance was part of the “Greek Navy mutiny” of 1973. During a patrol with other NATO vessels between continental Italy and Sardinia, Nikolaos Pappas and the officers were informed that a number of fellow naval officers had been arrested in Greece. The experienced officer realised that since his fellow anti-junta officers had been arrested, there was no more hope for a movement inside Greece. He therefore decided to act alone in order to motivate global public opinion. 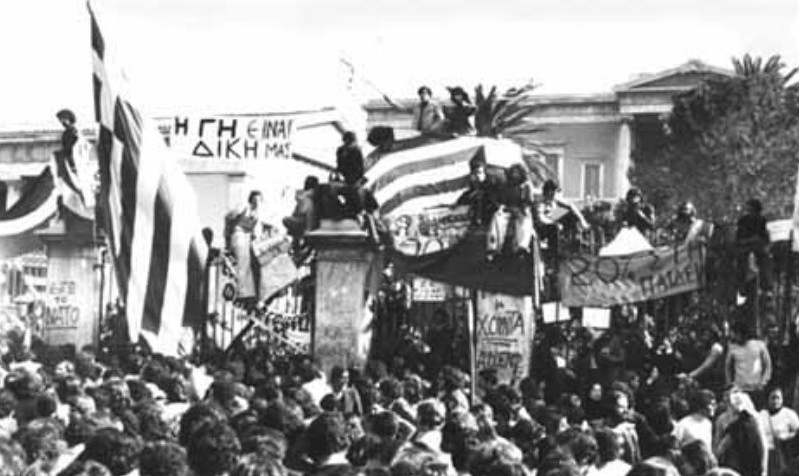 The Polytechnic Uprising & the counter-coup

The junta, trying to control every aspect of politics, had interfered with student syndicalism since 1967, by banning student elections. The first massive students’ action against the military regime started on 21 February 1973, when law students went on strike and barricaded themselves inside the buildings of the Law School of the University of Athens. As the anti-dictatorial student movement was growing, the police used brutal methods in order “to confront the threat”.

In order to diminish the pressure towards the military regime, Papadopoulos went on to remove several of their collaborators from the government and to form a "political" government headed by the leader of the “Progressive Party” Spyros Markezinis. The main task of the new government (8 October 1973) was to prepare 'parliamentary elections'.

On Wednesday, 14 November, 1973, a general meeting of the students’ unions took place in the National Technical University of Athens (known as the Athens Polytechnic) that resulted in the rejection of government measures concerning the planning of student elections.Although there was a strong police presence, more and more students were gathering in the area protesting against the military dictatorship and demanding “bread education and freedom”. An assembly was formed spontaneously and decided to occupy the building of the University.

During the second day of the occupation, thousands of people poured in to support the students. A radio transmitter was set up and the students started broadcasting messages of resistance. On Friday night, 16 November, police started facing off against protesters inside and outside the Athens Polytechnic University as tensions ran high.

On 25 November 1973, Brigadier Dimitrios Ioannides used the uprising as a pretext to stage a counter-coup that overthrew George Papadopoulos and Markezinis. Military law was reinstated, and the new Junta appointed General Phaedon Gizikis as President, and economist Adamantios Androutsopoulos as Prime Minister. Ioannides continued pulling the strings behind-the-scenes. 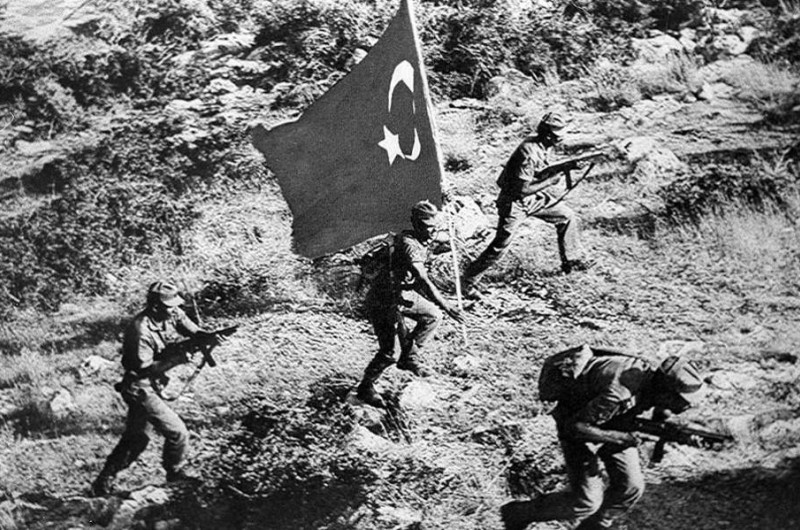 Cyprus crisis & the fall of the junta

On 15 July 1974 Ioannides orchestrated a coup in Cyprus, ousted the democratically elected President Makarios III and replaced him with nationalist Nikos Sampson. The Sampson regime was described as a puppet government, whose ulterior aim was the annexation of the island by Greece (Enosis); the coup was viewed as illegal by the United Nations and violated human rights laws.Tension had been running high in the Mediterranean island.

On July 20, 1974, at 5:20am, 40,000 Turkish troops landed and invaded northern Cyprus after last-minute talks in the Greek capital, Athens, failed to reach a solution.

The Turkish troops under the command of Lieutenant Nurettin Ersin implemented their invasion plan, code-named "Attila", illegally invading the island in violation of the UN Security Council Charter. Turkey justified the invasion as an effort to restore the constitutional structure of the Republic of Cyprus, that had been damaged by the coup, and the protection of the Turkish-Cypriot minority on the island.

In a two-phase invasion in July and August, and despite calls by the UN Security Council [Resolution 353 (1974)] and the quick restoration of constitutional order on the island, Turkey occupied 36.2 percent of the sovereign territory of the Republic, killing many Greek Cypriots, forcibly expelling about 180,000 of them and seizing their property. This has given rise to appeals to the European Court of Human Rights, which has issued major decisions on Turkey’s violations of the European Convention.

Turkey’s invasion in Cyprus created a domino effect that made the dictatorship crumble as Dimitrios Ioannidis gave up his rule on 23 July and called for a government of national unity. 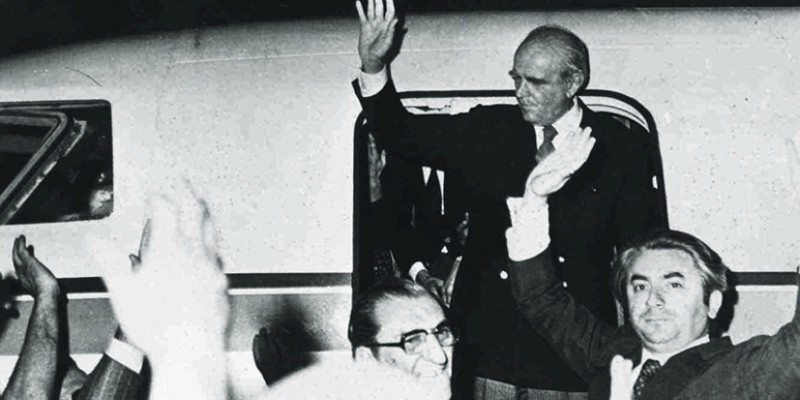 One day later, Konstantinos Karamanlis, a seasoned politician, until then self-exiled to Paris, landed in Greece, immediately forming a government of national unity to heal the wounds of the seven-year military junta. Despite being faced with an inherently unstable and dangerous political situation, Karamanlis managed to defuse the tension between Greece and Turkey, who were came on the brink of war over the Cyprus crisis, and began the process of transition from military rule to a pluralist democracy. Thus began the transitional period known in Greece as "Metapolitefsi" which eventually led to the establishment of the the Third Hellenic Republic.

Karamanlis insisted on Greece being integrated into the European Economic Community (later European Union) as the most appropriate solution to its political as well as economic instability. Greece’s associate membership (which had began in 1961) had been suspended in 1967, after the coup d'état. Karamanlis’ efforts were supported by many European leaders, as an act of solidarity with Greece’s nascent democracy. On 19 August 1974, the president of the European Parliament (EP) visited Athens to mark publicly the institution’s support for all Greek endeavors towards achieving democracy. Greece would eventually join the EEC in 1981.