The General Secretariat for Media and Communication has published a fact sheet that compiles figures and up to date information οn economic developments in Greece, providing an conscise and informative economic review of the year 2017 - including updates until March 2018.

Greece has returned to growth in the course of 2017, signaling a turning point for its economy. With a fiscal over-performance over the period 2015-2017 and a gradual restoration of investor and market confidence, signs of economic recovery are observed in an accelerating growth rate, a remarkable increase in exports of goods and services and in the return of Foreign Direct Investments to pre-crisis levels. At the same time unemployment has dropped, demonstrating a downward trend. The third economic adjustment programme is progressing smoothly towards its conclusion on 20 August 2018, paving the way for the technical work concerning the related growth-adjustment mechanism which is linked to debt relief measures.

With a view to the final decision expected in June, the post-programme framework that will define relations with Greece’s partners is also being prepared. A long-term growth strategy is being elaborated by the Greek government, taking Greece's economic profile into account and highlighting the country’s competitive advantages.  The strategy will continue the necessary structural reforms to make the country more competitive and less bureaucratic, while at the same time promoting fair growth for all.

Public Finance on the right track 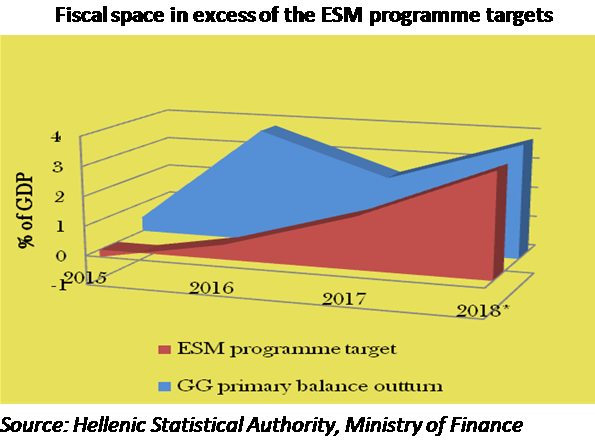 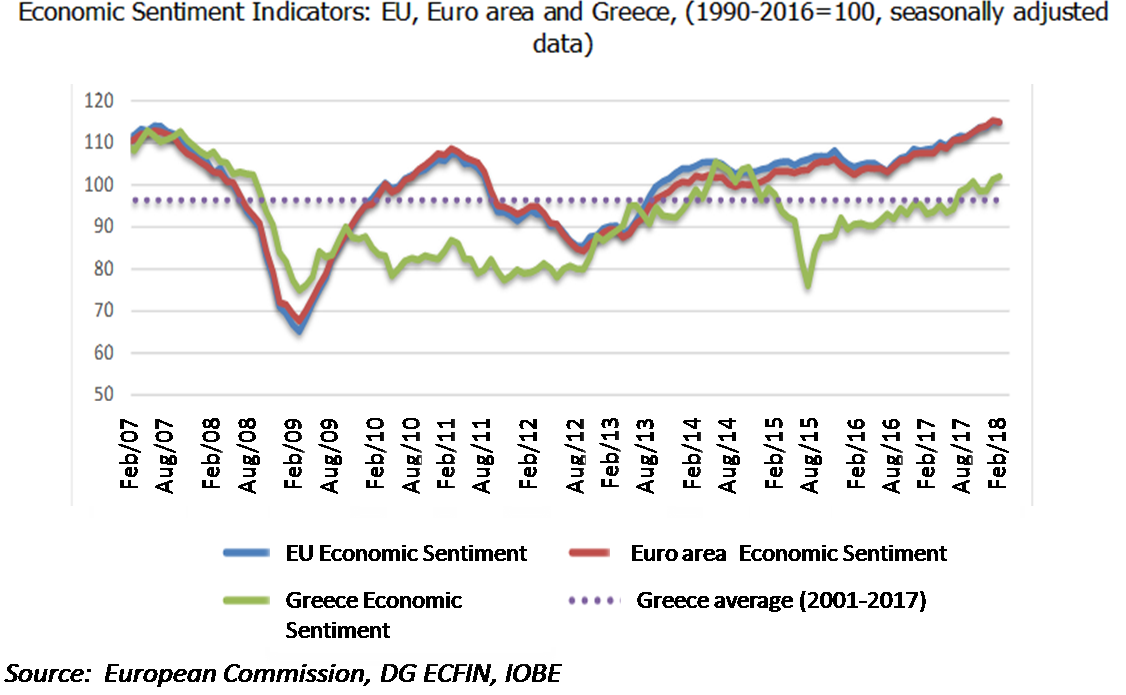 Greece returned to growth, in 2017, signaling a turning point for its economy. GDP growth reached 1.4% for the whole year according to first estimates (the biggest increase since 2007), while for 2018 GDP growth is estimated at 2.3%.

Exports of goods and services

Exports of goods and services during 2017 amounted to 59,758 billion euros in comparison with 55,970 billion euros for the corresponding period of the year 2016, recording an increase of 6.8%. 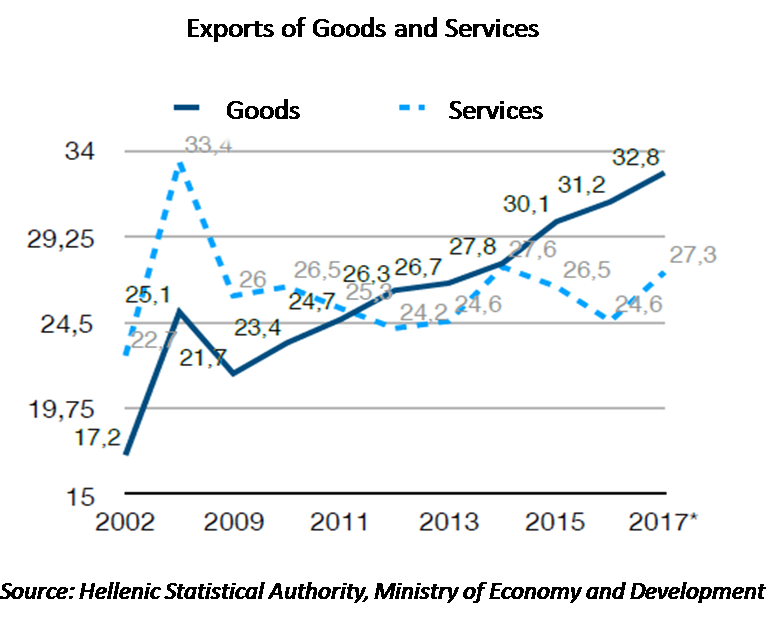 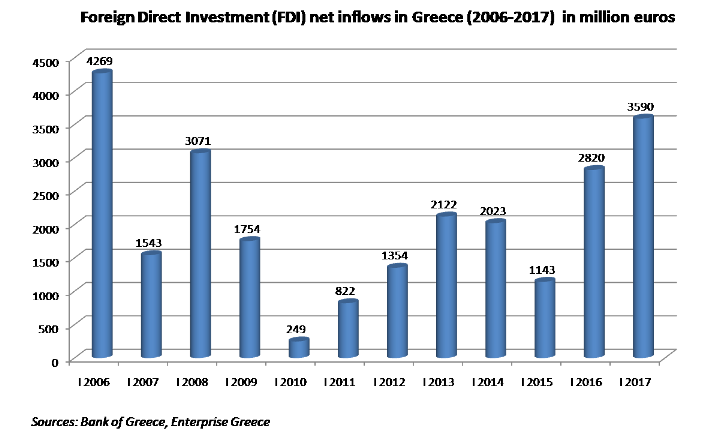 Total financing under the European Fund for Strategic Investments (EFSI) in Greece amounts to €2.1 billion and is set to trigger €8.1 billion in additional investments (as of February 2018).

Final consumption expenditure (in public and private sector) decreased by 0.2% in 2017 while gross capital formation representing productive investment increased by 9.6% (against 5% target), showing the biggest increase over the past decade.

Industrial production stayed on an upward climb for the third consecutive year, at an accelerated pace (+4.4% in the January-November period versus +2.5% respectively in 2016).

Agri-food sector is a key sector for Greek economy showing an increase of 15.3% in exports in the period 2014-2017 representing the 17.5% of total exports. 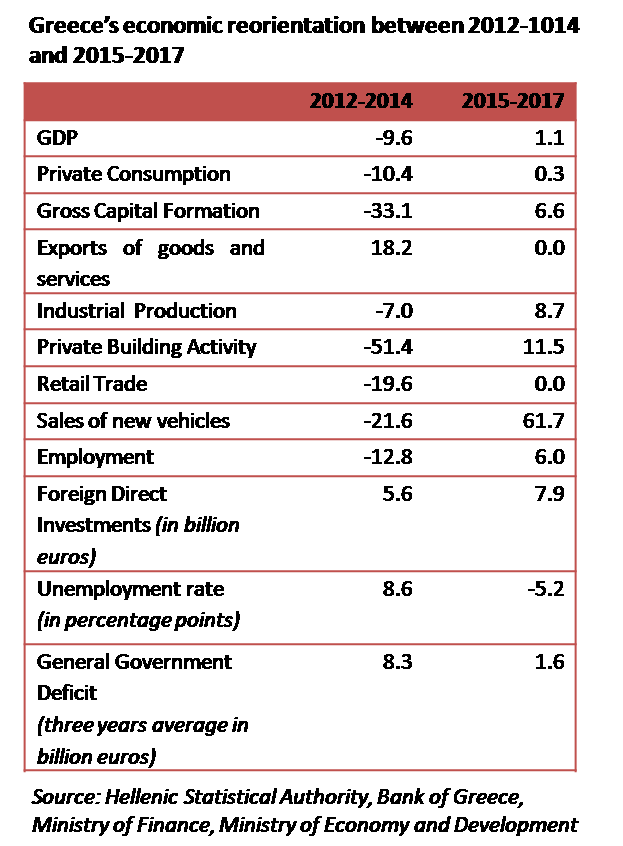 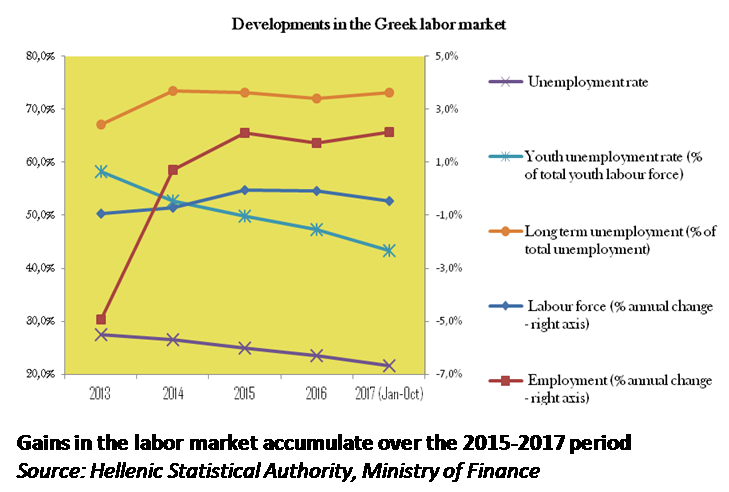 According to the 2017 Euro Plus Monitor issued by the Brussels-based think-tank Lisbon Council, Greece ranks first in Adjustment Progress Indicator, an index showing the progress that countries have made in fiscal adjustment, taking into account hard economic data but also structural reforms.