"Lament from Epirus" An Odyssey into Greek folk music 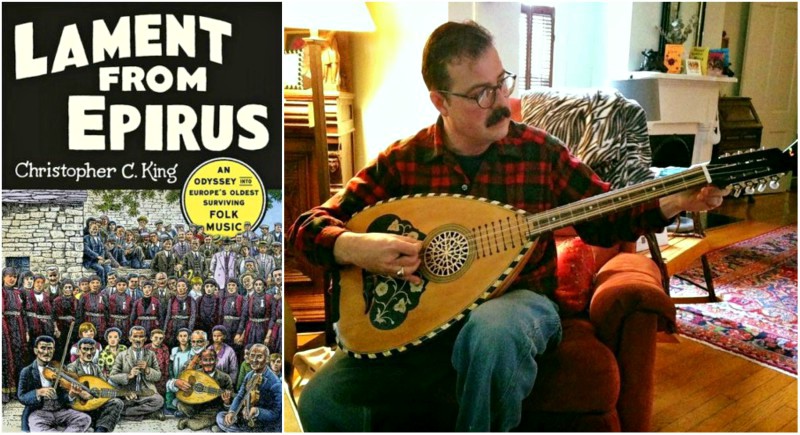 Grammy-winning producer, musicologist and record collector Christopher C. King is one of the world’s most passionate devotees of traditional Greek folk music, especially the idiosyncratic, usually mournful sound distinctive in Northern and Western Greece’s music and songs. His latest book Lament from Epirus: An Odyssey Into Europe’s Oldest Surviving Folk Music is the product of his dedicated research into the music of the region Epirus, in the northwestern part of Greece.

King, who describes himself as an “auricular raconteur and sonic archaeologist”, is a remastering engineer and producer who specialises in pre-war rural American music as well as various Eastern European, Balkan and Mediterranean musical traditions. He discovered the music of Epirus by chance, thanks to a stack of old 78 rpm discs he had bought, and was instantly spellbound by those 1920s and 1930s recordings that made him feel as if he “had been taken apart and rearranged”.

Soon, King contacted the Barounis brothers, avid collectors in Athens, from whom he eventually acquired their entire archive of Epirotic music recordings. Since then, he has released several albums featuring remastered songs from his extensive collection of Greek folk music. He has also traveled to the region, hunting for facts about legendary virtuosos of the past (Kitsos Harisiadis and Alexis Zoumbas, both featured in his album releases) and was amazed to discover that contemporary festivals (panegyria) retain the same spirit that enchanted him in the old recordings he first listened to.

Through these experiences, the self-described “sheltered, misanthropic record collector” fell in love with Epirus, its people and its rituals. In Lament from Epirus, he recounts this “unforgettable journey into a musical obsession, which follows a unique genre back to the roots of song itself” – given that King believes Epirotic music to be the oldest surviving folk tradition in Europe, originating from pre-Homeric cultures. The cover art is by renowned American cartoonist and musician Robert Crumb, who has also created the artwork for some of King’s music album releases.

Christopher C. King’s musical quest has also inspired writer and director Paul Duane to make the documentary While You Live, Shine (2018), filmed during the annual three-day festival for the departed emigrants of Epirus who return to their land of origin. The film is described as “a story of a cynical man escaping his prison of nostalgia & regaining his faith in humanity”.

Lament from Epirus will soon appear in Greek by Doma publications. On the occasion of his book’s presentation in Washington D.C., Christopher C. King gave an interview to Greece in America, the official newsletter of the Embassy of Greece in the U.S.A.

You have described Epirus as a "musical biosphere" and have previously praised the clarinet players of the region. Could you describe the moment that Epirus came to justify this term for you?

The moment that this happened was indeed an epiphany. I was attending my first panigyri (local festival) in the village of Vitsa, drinking Zagorian tsipouro with my Sarakatsanos friend George Charisis, and dancing. George began to explain the ancient pagan roots of the music and dance in Epirus. And that is when I realized that the "musical biosphere" of Epirus was largely intact and sustaining the life force of music here. I mean, I had heard this "musical biosphere" in the old 78 rpm discs but I had no idea that it still thrived in certain parts of Greece, especially in Epirus. But then it came to me... just like that. At that moment I perceived music as an organic entity within its unique environment.

In your book, you set out to discover why we make music and end up discovering how music is a tool meant to help us with therapy and survival. What was a significant time when music played a therapeutic role during your journey?

Once again, this happened during my first visit to Epirus, in Vitsa. During the panigyri, I was encouraged to dance the piece "Samantakas" and at the very end of the dance the clarinet player, Thomas Haliyiannis played his clarinet "into me." That is to say, he left the group of musicians and played the clarinet directly into my ear. I entered into some ineffable emotional and psychological state, probably best understood as "musical healing" or therapy because when I left the dance, I felt as if everything within me had been rearranged in the right way. Every time I return to Epirus, I always ask the musicians to "play into me."

Lament from Epirus constitutes your literary debut. However, you are also a Grammy-winning producer and musicologist. What were you able to draw from your previous experiences in music production while writing the book?

My background in music theory and musicology provided me with tools to help process what I was hearing and how the music relates to the complex history and culture of the Epirotes. However, the book is by no means "technical." It is much more of a narrative travelogue and memoir, where I reflect on how folk music functioned within smaller isolated communities and how I discovered this still viable function in the music of northwestern Greece. That it still lives there.

What does the future hold for you and Lament from Epirus? Perhaps a collaboration with Greek research institutions and another visit to the region?

I have very precise long-term plans regarding the future, this book, and my work. First, I intend to move both myself and my archive of Greek 78 rpm discs and physical collections to Epirus. I have wanted to live there ever since I started researching and writing this book and I travel to Epirus several times a year. Second, I am working on collaborating with the University of Ioaninna through the musicologist George Kokkonis and the Society for Epirotic Studies (ΕΗΜ) to find a suitable building to house the archive and develop a robust Archive of Epirotic Music, which can actively collect recordings and artifacts of this largely intangible cultural heritage. I plan to make this my life's work and I want to give back to Epirus as much as what it has given me. Third, I'm writing a new non-fiction book about murder ballads both in Greece and in the southern United States. I've only scratched the surface of this music with this first book.