Hilary Roberts on German and British Photography in Greece 1940-1945 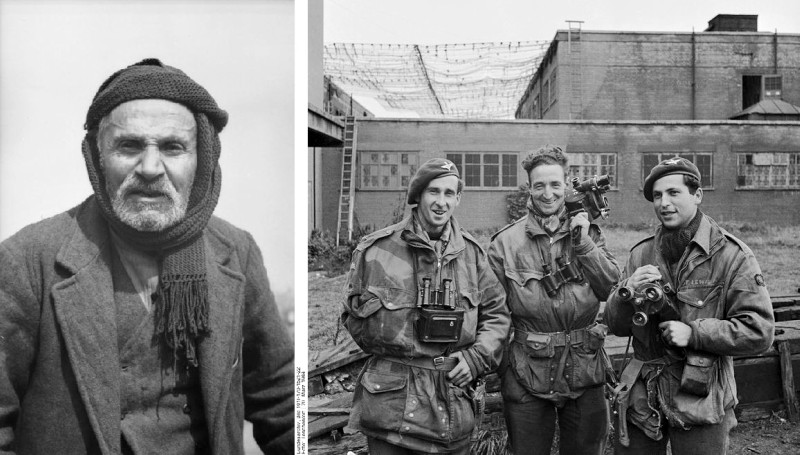 During WWII, Athens remained under Axis occupation from April 1941 to October 1944. The international conference “The Occupier’s Gaze: Athens in the Photographs of the German Soldiers, 1941-1944” held by the Directorate of Modern Cultural Heritage of the Hellenic Ministry of Culture and Sports, on 12 April 2019, shed light on rare historical evidence, illustrating an aspect of that time we do not often think about: the way the occupied Greece, with its reach history and symbolisms for European culture, was viewed by the conquering forces.

Greek News Agenda spoke* with Hilary Roberts of the Imperial War Museums (IWM), regarding her paper presented at the conference, titled “A Foreign Perspective: German and British Photography in Greece 1940-1945”; drawing on the photographic collections of the German Bundesarchiv and Britain’s IWM, Roberts considers the perspectives of German and British photographers who worked in Greece in that period. 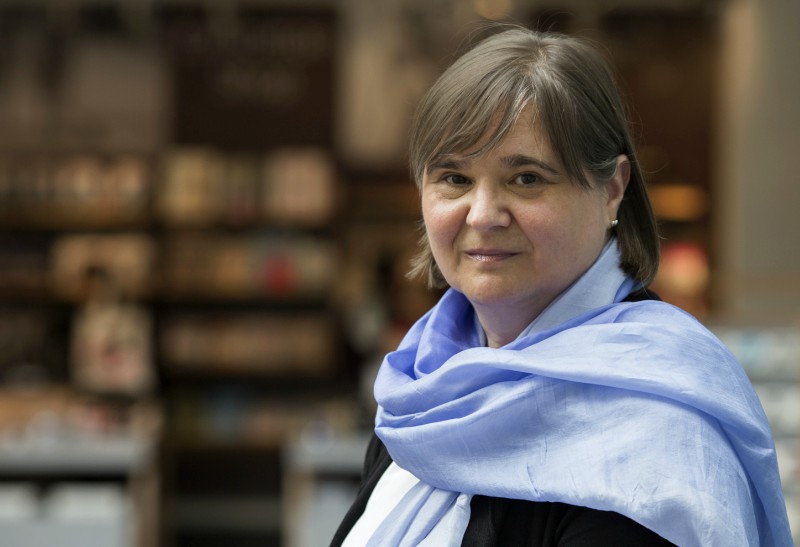 Hilary Roberts is a Senior Curator of Photography at Imperial War Museums. A specialist in the history and practice of conflict photography, she has numerous publications and exhibitions to her name, including The Great War: A Photographic Narrative (Jonathan Cape/Knopf, 2013), a highly praised overview of photography in WWI. Roberts works closely with photographers, curators, researchers and writers who document or respond to contemporary conflict. In 2014, she was appointed a Canon Master with a remit to mentor young photographers. In 2017, Roberts became the first British curator to receive the Royal Photographic Society’s prestigious award for curatorship.

How much do we know about the background of these German and British photographers who worked in Greece during the Second World War? Were they mostly working for their countries’ respective armies, for national news agencies or for international organisations?

Public interest in these photographers has grown considerably in recent years. Thanks to international research, much more is known about them today than at any point in the past. But research is not complete and there are still important gaps in our knowledge.

Most of the British and German photographers were serving with the armed forces of their respective nations. Professional photographers were not exempt from conscription in either country. Many ended up working as military photographers after being called up for war service. Official controls and limited access to photographic materials curtailed the activities of all civilian photographers in Greece, regardless of nationality. The German and British propaganda ministries played a big part in determining what was photographed and how. News agencies and international organisations published the output of military photographers but could not commission work from them directly. 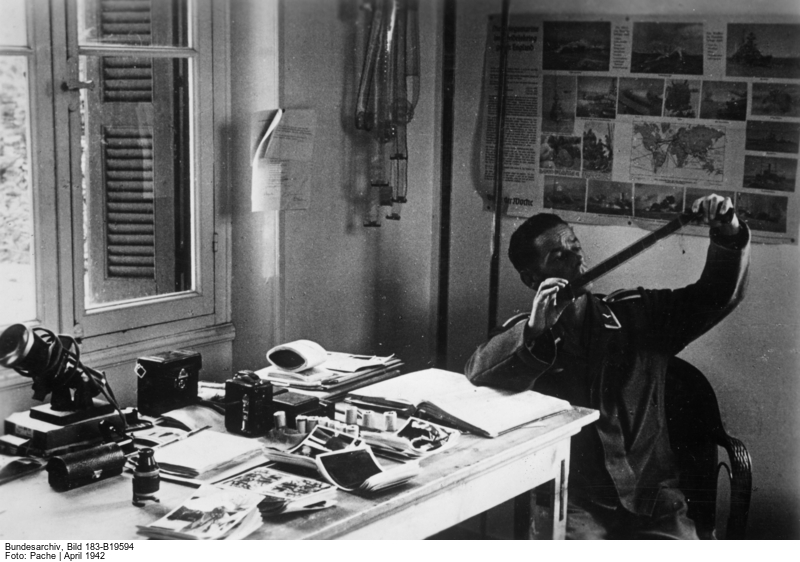 Your paper discusses the extent to which these collections “support a genuine understanding of the war's impact on Greece”. Do you have a definite answer to this question?

Both collections make an important contribution to understanding. Without them, our understanding can never be complete. But – as I mentioned in my paper – these collections only tell part of the story. For a fuller understanding, it is essential to consider other collections as well, especially those held in Greece itself.

Photographs can contextualise and be contextualised by other media forms, such as film, oral testimony, documents and art. In my opinion, a genuine understanding of the war in Greece depends on the ability to connect, study and interpret the many regional, national and international collections which address different aspects of this subject.

How much do the perspectives of German and British photographers differ between them? And to what extent do they converge?

Nevertheless, British and Germans photographers do have converging perspectives in some areas. These were often connected to propaganda requirements. Tourism is one example; the photographers of both nations produced very similar photographs of the classical sites. Another is the documentation of military conquest and defeat. 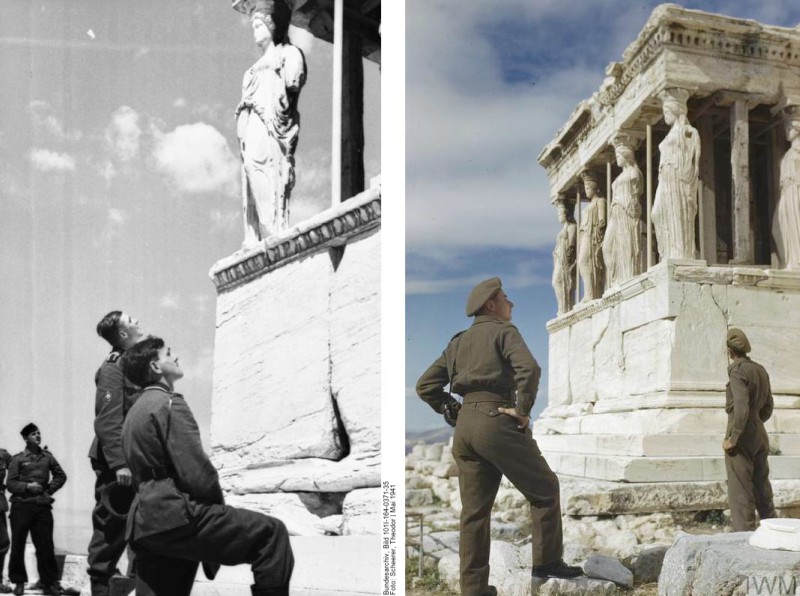 In the end, how much does the gaze of the ally differ to that of the occupier? Does the quality of being a foreigner determine this gaze more than the presence (or absence) of a friendly predisposition?

While the perspective of foreign and local photographers will always be different, the quality of a foreign photographer’s gaze is potentially greater if that photographer is welcome. However, a photographer’s status as ally or enemy is not the only factor which determines how a conflict is photographed (see next question).

You have numerous broadcasts and publications on photography during the two World Wars, while recently you curated an exhibition by award‐winning photojournalist Sergey Ponomarev on the Syrian conflict. Do you notice significant differentiations between war photography then and now?

The formative influences on war photography have been remarkably consistent throughout the genre’s long history. Factors which influence how any conflict is photographed include access to events, ethical principles, technology and of course the status, motivation and working methods of photographers and their publishers. The variations within these factors change how a conflict is photographed. For example, digital technology and internet publishing are two key technological changes, which have affected every aspect of conflict photography in the 21st century. 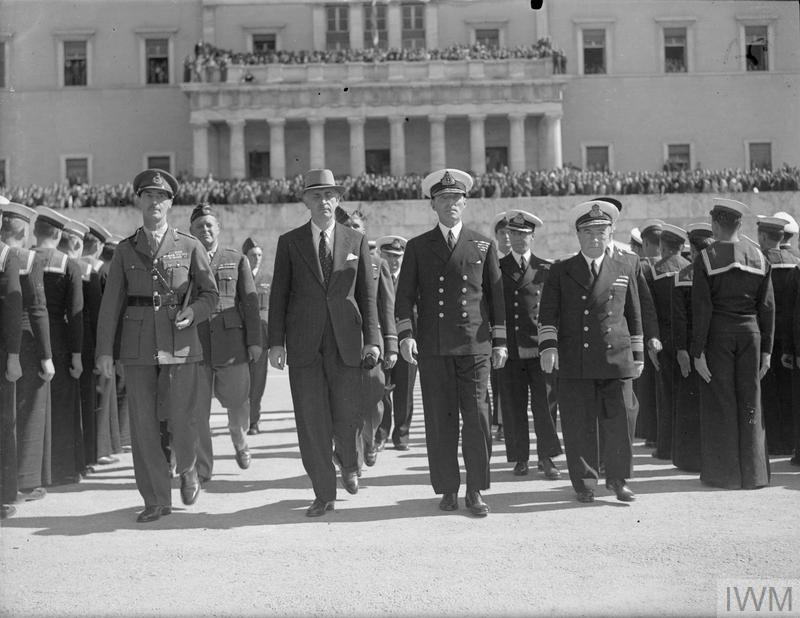 1. Left: A Greek farmer at Agios Petros, Andros, 20 March 1944. Photograph by Kriegsberichter Werner Teschendorf, PK 690 ©Bundesarchiv. Werner Teschendorf published two books on X-Ray photography before the war. He also worked as a stills photographer in the German film industry in the 1930s. During the war he served as a military photographer with Propaganda Kompanie 690.

4. Left: German troops view the Caryatids of the Erechttheion at the Acropolis, Athens, May 1941. Photograph by Kriegsberichter Theodor Scheerer, PK 690 ©Bundesarchiv.

Right: British soldiers Sergeant R Gregory and Driver A Hardman admire the Caryatids during a tour of the Acropolis in Athens, October 1944. Photograph by Captain A R Tanner, AFPU ©IWM.

5. British and Greek leaders at the Anglo-Hellenic Naval Memorial Service in Athens, 22 October 1944. British photographers portrayed the Greek people as friends and allies. Photograph by Lt D C Oulds, Royal Navy ©IWM. Left to right: Vice Admiral P Voulgaris (C in C Royal Hellenic Navy); Rear Admiral Mansfield J M RN, (OC British Warships in Greece); George Papandreou (Prime Minister of Greece); Lt Gen R M Scobie, (GOC British Forces in Greece). Dennis Oulds worked for the Central Press news agency as a press photographer before and after the Second World War. He covered the full range of news stories but was particularly known for sports photography. Oulds joined the Royal Naval Volunteer Reserve in 1940 as a photographer with the rank of Honorary Lieutenant. As an official naval photographer, Oulds covered the war on land and at sea in the Atlantic, Far East and Mediterranean theatres. He also covered the crossing of the Rhine and the Yalta conference.

*Interview by Nefeli Mosaidi (Photographs are used courtesy of the Imperial War Museums, the German Federal Archives/Bundesarchiv and Hilary Roberts. All rights reserved.)