“4.1 miles”: A documentary on refugee crisis shortlisted for an Oscar nomination

“4.1 miles” a student film by Daphne Matziaraki on the refugee crisis has been voted on October 26 as one of the contenders for an Oscar nomination in the field of Documentary Short Subject.

“4.1 Miles” portrays a day in the life of a Greek coast guard captain on the island of Lesbos, who is caught in the middle of the biggest refugee crisis in Europe since World War II. By focusing on Kyriakos, the coast guard captain, director, producer and editor of the film, Daphne Matziaraki, a Greek documentary filmmaker, holder of a Master’s in documentary filmmaking from UC Berkeley Graduate School of Journalism, looks into a crisis stricken society which, against all odds and with a minimum of means tries helping those in bigger need. “4.1 miles” was funded by the Filmaker Fund of UC Berkeley Graduate School of Journalism.

As Matziaraki told San Francisco Chronicle, she had closely followed the Syrian refugee crisis, with people flooding into Greece through Turkey, and felt the coverage wasn’t conveying the truth in a visceral way. She hit on the idea of following one of the coast guard boats that had been forced into the Herculean task of rescue duty. “I needed someone to tell me the story from the inside, not just to do an interview,” Matziaraki said.

Talking about the film to the NYT she added: “When I returned home to Greece last fall to make a film about the refugee crisis, I discovered a situation I had never imagined possible. The turquoise sea that surrounds the beautiful Greek island of Lesbos, just 4.1 miles from the Turkish coast, is these days a deadly gantlet, choked with terrified adults and small children on flimsy, dangerous boats. … The scene was haunting.

Regardless of the hardship Greeks have endured from the financial crisis, for a long time my home country has by and large been a peaceful, safe and easy place to live. But now Greece is facing a new crisis, one that threatens to undo years of stability, as we struggle to absorb the thousands of desperate migrants who pour across our borders every day. […]

In making this film, I was struck by the fine lines that separate us, the moments when our paths cross fleetingly, and we look at one another for the first time and sometimes for the last. This film shows that crucial moment between life and death, where regardless of political beliefs, fears or preparation, some people will go beyond themselves to save a stranger”. 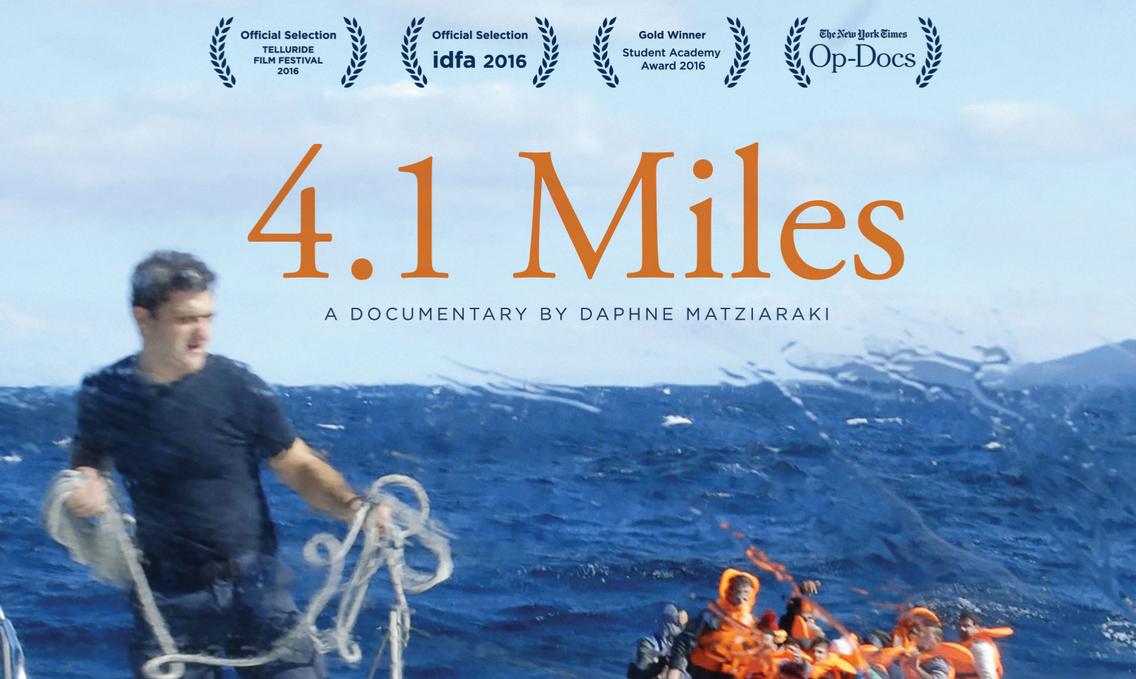 Matziaraki’s hope is that the nomination will help get her film before a wider audience. “I’m excited by this opportunity because I believe this is one of the most pressing humanitarian crises of our times,” she said.

The film has been more than successful so far. “4.1 miles” has been included in the New York Times Op-Docs, which is NYT editorial department’s award-winning section for short, opinionated documentaries, produced by independent filmmakers with wide creative latitude, covering current affairs, contemporary life and historical subjects.

The documentary has been projected in 6 festivals and won Student Academy Award Gold Metal on September 22, 2016 in Documentary Category. The Academy of Motion Picture Arts and Sciences, based in Hollywood, Los Angeles, established the Student Academy Awards in 1972 to provide a platform for emerging global talent from colleges and universities around the world by creating opportunities within the industry to showcase their work. Past Student Academy Award winners have gone on to receive 51 Oscar nominations and have won or shared nine awards.

As mentioned above, “4.1 miles” has been voted among 61 eligible entries for 2016 as one of the ten contenders for the 89th Academy Awards in the field of Documentary Short Subject. Five of the contenders will earn nominations for the 89th Oscars that will be announced on Tuesday, January 24, 2017.

Greek Cinema in the Coronavirus Era: Iris Awards and Homework for the “Stay at Homers”