Dialogue of Berlin: From the Diary of a Greek Arts Correspondent

Nicos Ligouris’ Dialogue of Berlin (Der Dialog von Berlin) is a cinematic essay that combines documentary, fiction and philosophical contemplation (recently screened in the 19th Thessaloniki Documentary Festival) on the subject of the paradoxical interplay between the cultures of the European North and South, with the camera continuously moving back-and-forth between Germany and Greece. Ethnography and historiography, culture and everyday life, political and personal experience all come together forming new references, in the course of what constitutes a journey through the labyrinth of recent European history.

The following text is based on extracts from the film's script (You can read the original -in German- here: Nord-Süd-Dialog - Filmessay von Nicos Ligouris): 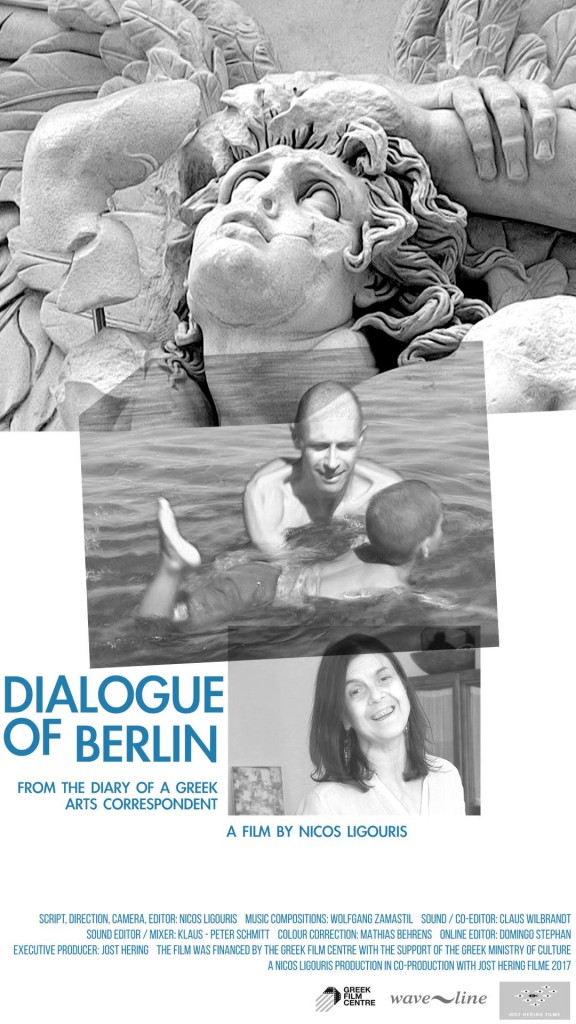 “Lifetime is a child at play, moving pieces in a game” (Heraclitus)

When I first came to Berlin, I was surprised by the presence of classicist elements in the city's historical centre. The statues of the Goddesses Nike and Pallas Athena on the Schlossbrücke, Schinkel's Museum in the Lustgarten, the Alte Nationalgalerie, modelled after the Parthenon and many more.

What were so many replicas of a past civilization of the ancient South, doing in the capital of the Protestant North?

The phenomenon had started with Winckelmann and continued with Goethe and others. Something unprecedented had taken place. Philologists and artists of the 18th century discovered ancient Greek culture and felt such a deep affinity to it that they decided to become the Greeks of modern times. And they achieved this transformation. Standing on the foundations of the foreign, they found their own. And German culture took off.

I try to get under the skin of those people. Such energy! Such power of identification! It was unprecedented;  to write tragedies or to revisit ancient philosophy i.e. to attempt what other civilizations had brought to perfection presupposes a special skill in the art of disguise, according to Gustav Seibt. Germany's secret.

Crete, June 2015. A 3 hour flight and you find yourself in a different world. In the 19th century, it would have taken months. The abolition of distances makes different times clash. But their synchrony brings about demystification: The exotic, be it of the South or the North, becomes commonplace and ends up causing feelings of repulsion. 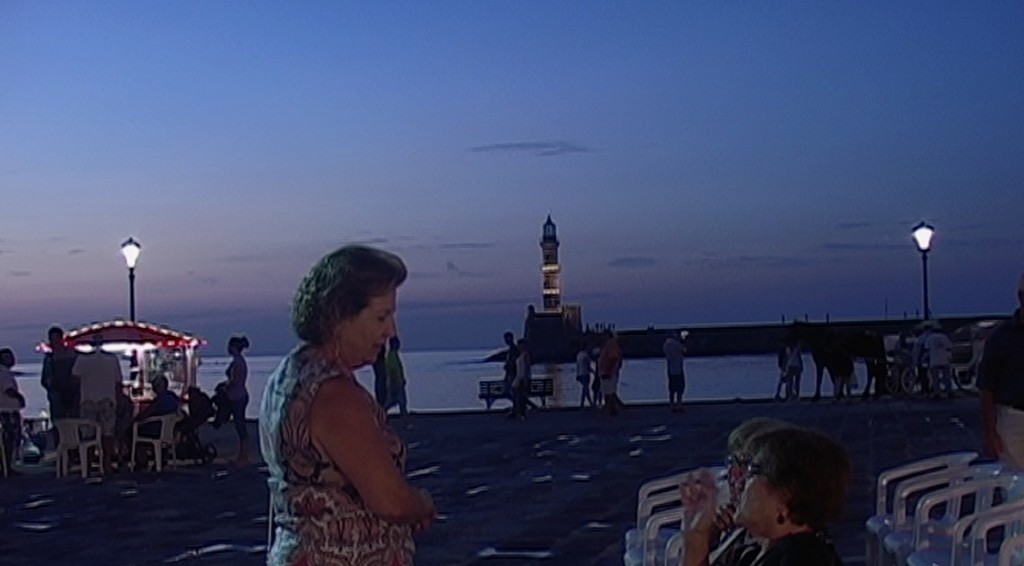 How odd: no one bats an eyelid that we now have palm-trees in Berlin  and that people sit al fresco as if they were in the Med.

Once a year the Berlin Opera broadcasts  live performance on Bebel Square.  It was remarkable to see the reverence with which the audience followed the music, in the summer drizzle. French writers had said of their ancestors that they were "people of poets and thinkers". The Germans had refused this praise they were showered with even wile the smoke rising up from the factory chimneys was shrouding the image of the romantic nation. In reality, smoke and myth, the researcher's perspective and enthusiasm, were for the Germans two sides of the same coin.

Repeated admonition to myself: My subject should not be delving into memory, and faith in its therapeutic power, but into oblivion. The oblivion that's necessary for a new beginning.

The oblivion that does not repel, does not consume its subject, but, as odd as it may sound, secures it under lock and key to serve one day as material to diarists.

Undated. Street market in Athens. A nation off balance, a nation of extremes.  An ancient people catapulted into modern times. For years, subjects of foreign empires, merchants, wanderers, immigrants. Greece: Europe's unknown country. How many Europeans know that the people of this country at the end of World II, slaughtered each other in a civil war, whose wounds remain open to this day?

My German friend Constantinos, who's been living in Greece for years believes that the South is not about all the quaint clichés; it is an existential place, he says, where when the element of fire rages in the blistering summers, it obliterates everything in its way. The painful experiences of destruction and regeneration, a phenomenon that defines this country, is a thing of the past for the North.

I tell myself: I shouldn't juxtapose North and South but observe both regions as different aspects of the human condition.

Undated. Osthafen. In the gaps between the buildings of this vast city that none of its residents knows in its entirety, and in those non-spaces that will soon be no more, I search for traces of the time prior the reunification. Berlin has always been a story of never-ending demolitions. Each era destroyed the previous in order to erect a new one. After the war, they built functionally.  After reunification they built in the spirit of critical reconstruction; now they have gone retro. However, most of the buildings being built now, won't be around in 50 years, says urban-planner Dieter Hoffmann-Axthelm. 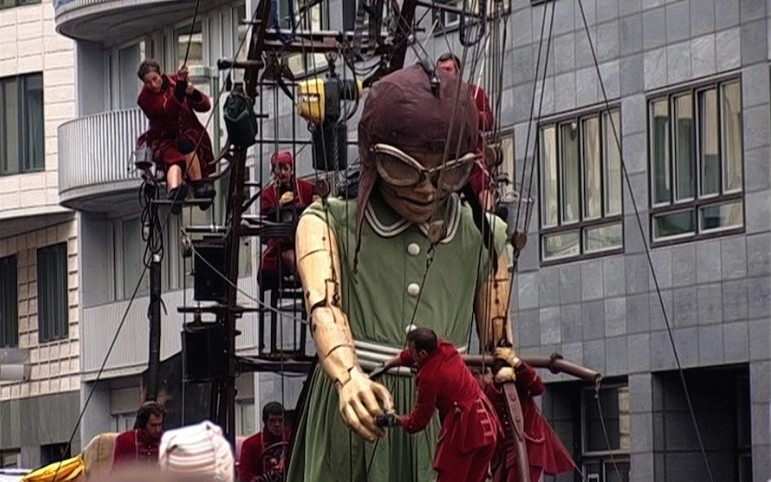 Berlin, A plate for Hitler’s refuge

This is one of the reasons for the current tourist invasion: People want to live in a city in constant transformation. During the day, they visit the places of horrors past. At night they turn to trendy clubs. It's fun to dance or stroll on the thin ground that strives to cover the past. I'm not criticizing tourism, it has the power to make us forget the sins of the past.

August 2015. En route to an evening concert in western Crete.

The fate of the defeated Alkyoneus gets me thinking of Dostoyevsky, who, exiled in Siberia, bursts into tears when reading Hegel, who writes how this vast country, much like Africa, is unworthy of mention in world history. I also think of Kostas Axelos who, even as early as in 1954, comes to the sad conclusion that Greece is solely in ruins and that the Greeks, hard as they might toil, do not manage to produce anything and what they only do, is to search for themselves; passionately so.

The history of Europe: a series of horrors, wars and calamities constantly being repeated in new guises.

How do I get out of the labyrinth? Does memory help us prevent new evil?

Or does its veneration lead us to the compulsion of repetition, thus to the opposite of the intended? Historians cannot cite any example where the memory of horror managed to prevent a new one. Will and desire have always been stronger than wisdom.

Unlike me, my friend Constantinos Fischer believes that history does not repeat itself.  To halt the accumulation of historical horror we don't need the history of the past but of the present, he says.

Therefore, as a visual artist he picks whatever history book he finds and colours its cover. Red for the defeated, blue for the winners. He calls this "the science of history changing profession".

Constantinos studied historical works to understand Europe's present situation. He only encountered crimes and killings in them.

So, like Paul Valéry, he maintains that: "History is the most dangerous product evolved from the chemistry of the intellect. It justifies what we want it to.  It teaches absolutely nothing, for there is nothing that it can't justify. I long for the end of the imaginary memories collectively called history." Constantinos has turned his back on Germany because his parents never spoke of the crimes of his grandfathers.

I love his generation. At the same time, I feel sorry for it as, renouncing its past it casually discards all that was good or beautiful in it.

I do not fear words like "Germany", "Nation", etc. I have no difficulty in loving Germany despite its history. The infamous notion of "National Culture" does not ring negative to me; it is full of things that I like. For example, Adalbert Stifter. 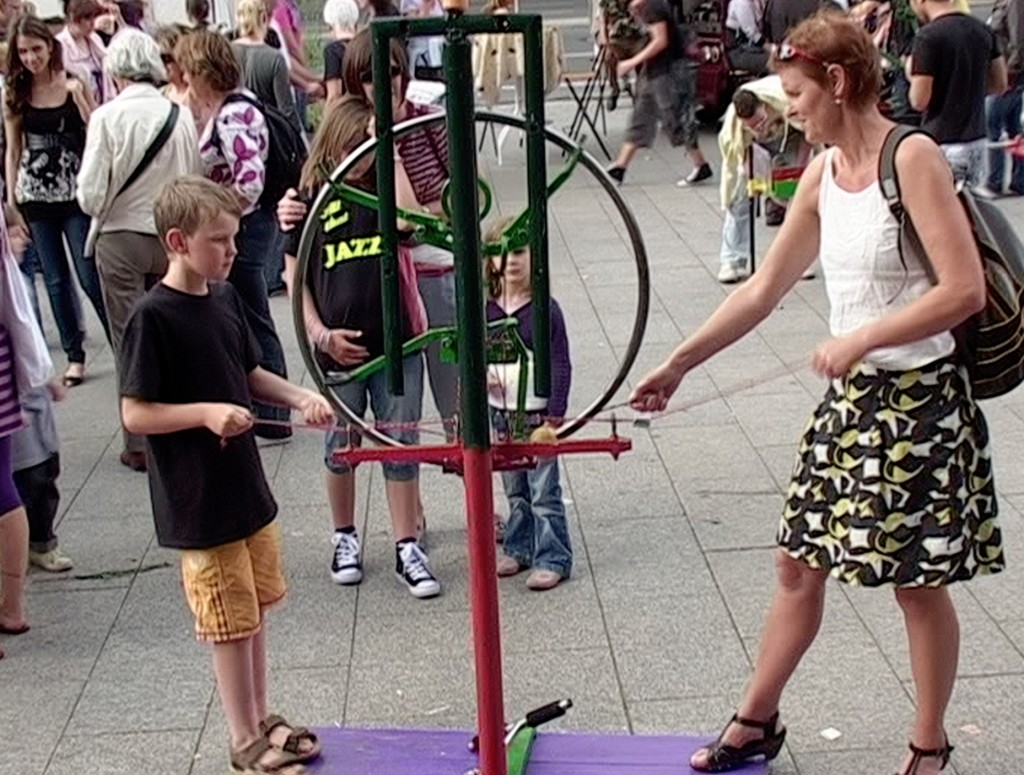 June 2016. Western Crete. Fete in the church of the prophet Elijah.

No matter what I do, I remain preoccupied with the peculiar circumstances that defined the birth of the modern Greek nation: After the liberation from the Ottomans, the Greeks accepted from the Germans and King Otto a new narrative which, determined by an idealized image of ancient Greece, was doomed to fail. The modern Greeks do not match up to the white statues; they are colourful. A series of misunderstandings determines the continuation:  Thus, during the German occupation of World War II, for example, the old love of the philhellenes turns into hate and racism. In the '60s, the rise of tourism fires up a new love: in the form of the sun, of retsina and bouzouki music.

October 2015. I check the footage for my Berlin project. It had all started with my surprise by the presence of classicist elements in the European North. I may now be able to explore a second narrative which may lend a different dimension to the project. A fictional element, a utopia I could narrate documentary-style: A man educates a child.  The child grows rapidly and acquires supernatural powers; the child dreams, and whatever he dreams turns into a world. One of these dreams is us: Europe. When the child wakes up and sees his creation, he gets dumbfounded. Pain, everywhere. He tries to obliterate pain; he dreams up medicine, neurosciences, social reforms. But pain persists. The child loses interest and starts dreaming up other worlds. The only thing that remains of us is a brief memory in his thoughts.

I hope the two narratives come together to create a whole, and embark on a dialogue.