The city of Thessaloniki has been continuously inhabited since the Hellenistic period; it was a provincial capital and busy seaport in Roman times, the seat of one of the first European Christian communities in early Christian times and, in the Byzantine era, a metropolis second in importance only to the imperial capital.

Thessaloniki's early Christian and Byzantine monuments, included on the UNESCO World Heritage List since 1988, remain to this day a testament of the city's fascinating history and former political, cultural and artistic stature; scattered throughout the modern urban landscape, they turn the city into an open-air museum.

Thessaloniki (also known as Thessalonica or Salonica), often referred to as "the co-capital" or "the Nymph of the Thermaic Gulf", is today the second most populous city in the country, and also by far the largest and most important city in Macedonia and northern Greece. An important economic and cultural centre since antiquity, the city boasts over two thousand years of uninterrupted historical presence. 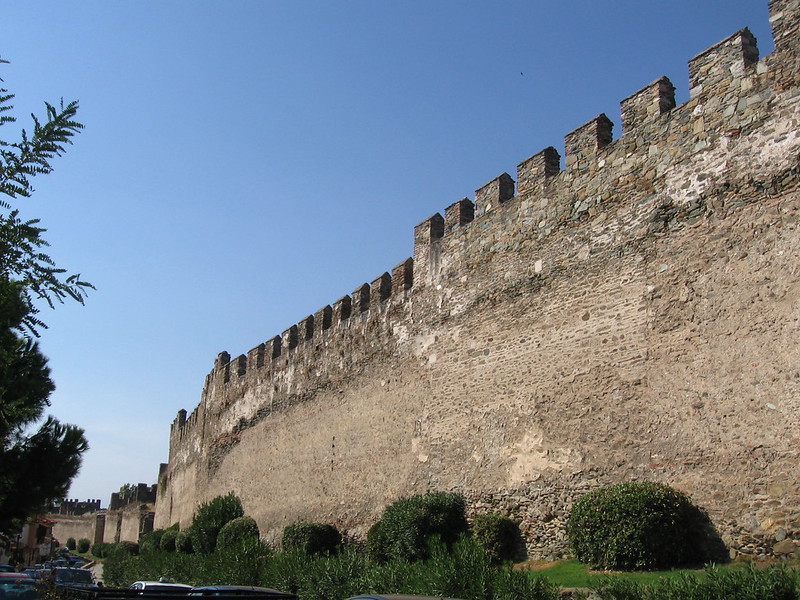 A section of Thessaloniki's walls (by Elisa Triolo via flickr)

It was founded in 316/315 BC by Cassander, one of Alexander the Great’s Diadochi, king of Macedon from 305 BC to 297 BC; Cassander named the city after his wife Thessalonike, Alexander’s half-sister. Initially established as a military port, it gradually began to expand thanks to its privileged position on the Thermaic Gulf, at the mouth of the Axios river valley. Following the Battle of Pydna (167 BC), which ended in a decisive Roman victory and marked the fall of the Kingdom of Macedon, Thessaloniki was designated as the capital of one of the four cantons (nominally independent districts) into which the former kingdom was divided. With the end of the Fourth Macedonian War (150-148 BC) and the annexation of Macedon to the Roman Empire, the city became the capital of the new Roman Province of Macedonia, officially established in 146 BC, which comprised the entirety of the Greek territories.

Under Roman rule, Thessaloniki entered a period of rapid development and prosperity. Situated on the Via Egnatia (built between 146 BC and 120 BC), which connected the Adriatic Sea with the Hellespont and Asia Minor, it would soon become the most important city in the Balkan Peninsula, a centre of considerable military and administrative significance and a major commercial hub for East-West trade. Following the Battle of Philippi (42 BC), Thessalonki, having sided with the victors, was granted the status of civitas libera ("free city", an autonomous city permitted to enjoy its own laws and elect its own magistrate).

Around 50 AD, Paul the Apostle visited Thessaloniki while on his second missionary journey, to preach the new faith. As attested by the two Pauline Epistles to the Thessalonians –included among the earliest extant Christian documents– the city had become the site of one of the first Christian communities and one of the first bases for the spread of the new religion in Europe.

Galerius, Caesar (under Diocletian) since the establishment of the Tetrarchy (293 AD) and Eastern Roman Emperor since 305 AD, chose Thessaloniki as his seat during two periods: from 299-303, and from 308 until his death in 311 AD. During the period when Thessaloniki was serving as Galerius’ imperial headquarters, it emerged as the most important centre in the greater region. The city's patron saint, Saint Demetrius, was believed to have been executed in 306 AD, during the Christian persecutions of Galerian. 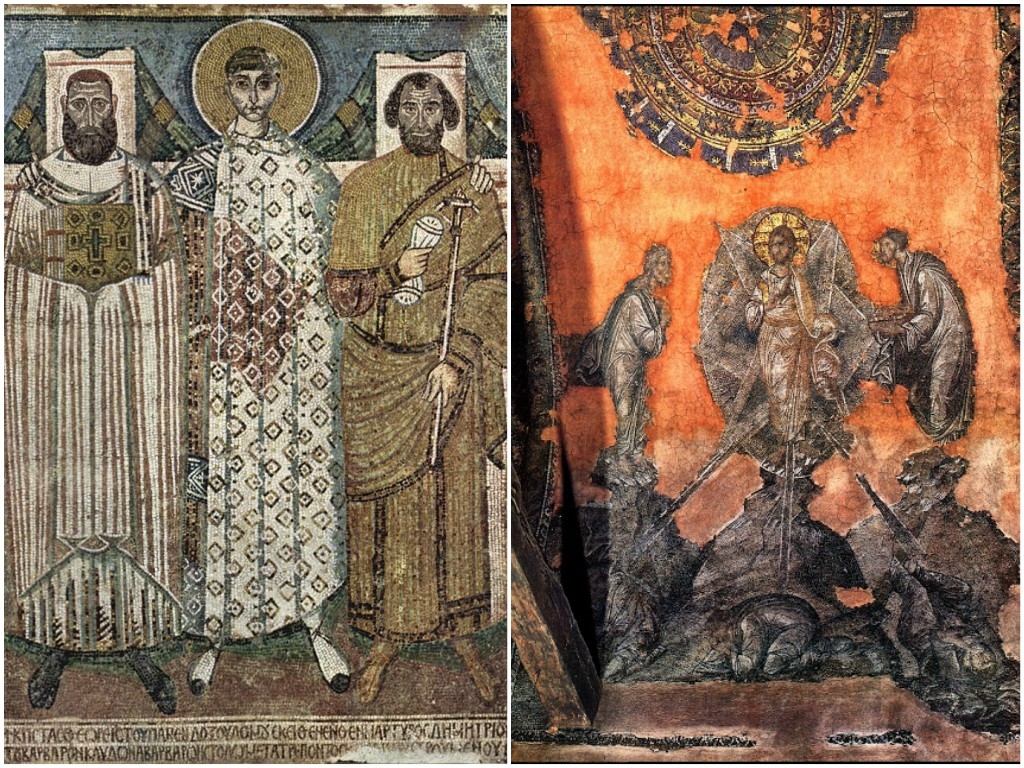 After becoming the sole emperor of the Roman Empire in 324, Constantine the Great decided to declare a new Eastern capital (in place of the Nicomedia, capital in the East at the time), considering Thessaloniki among other cities; he eventually chose the ancient city of Byzantium, renaming it Constantinople and moving the capital there from Rome in 330 AD. This also greatly added to Thessaloniki’s influence and geostrategic value in the Roman Empire and, after the latter’s final division, in the Byzantine Empire. In 380 AD, the "Edict of Thessalonica" was co-issued there by three reigning Roman Emperors, including Theodosius I, making Christianity the state religion of the Roman Empire, while in 390 the city became the site of a massacre of innocent civilians which stained Theodosius’s reputation.

In the following centuries and until its fall to the Ottomans in 1430, Thessaloniki had a turbulent history in which the city was repeatedly raided and attacked by Goths, Avars, Persians, Slavs, and Bulgarians, and it also suffered from pillaging, invasion and ravaging by various aggressors including the Saracens (904) and the Normans of Sicily (1185). In the early 13th century, in the context of the Fourth Crusade (1204), the city came under the rule of the Latin Empire of Constantinople for twenty years, until Theodore Komnenos Doukas, ruler of Epirus, seized in 1224; it was subsequently recovered by the Byzantine Empire in 1246, conquered by the Ottomans in 1387 following a four-year siege, retaken in 1403 by the Byzantines only to be ceded to the Venetians in 1423, until its final conquest by Sultan Murad II in 1430. 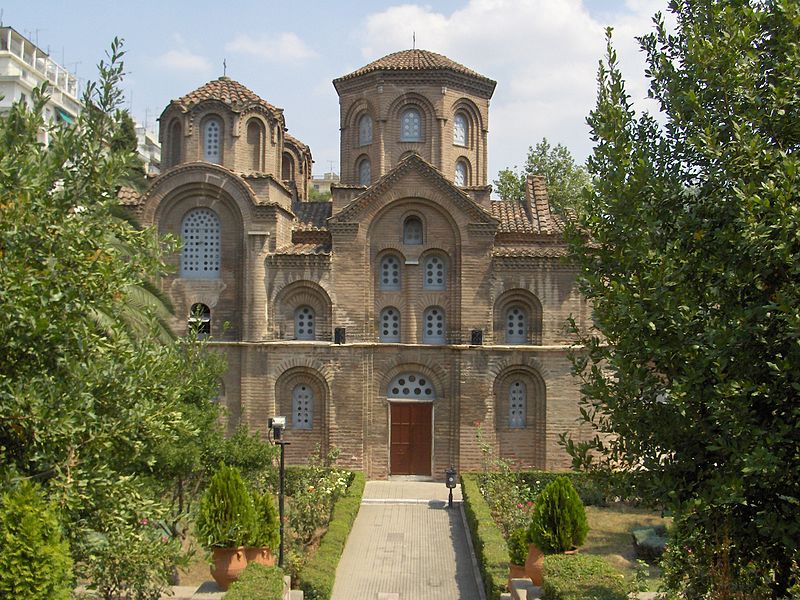 In spite of all this, during the Byzantine millennium Thessaloniki would develop into one of the richest and most densely populated cities in the empire, a metropolis and a centre of art and culture, second in stature only to Constantinople, thereby earning the characterisation of Symvassilevousa ("co-reigning" city) – an honorific status still referenced in its modern-day epithet Symprotevousa ("the co-capital" [of Athens]).

It was therefore the Byzantine millennium that defined the city’s profile; although Thessaloniki also preserves important vestiges of other historical periods, bearing testament to its Ottoman past or its heritage as the seat (until WWII) of a large Jewish community, it is predominantly the city’s Byzantine legacy that has left its mark on its urban landscape.

The Early Christian and Byzantine monuments of Thessaloniki, inscribed on the UNESCO World Heritage List in 1988, are some of the most important and well-preserved examples of architecture of their kind. Built over a long period of time, from the 4th to the 15th century, and nestled around every corner of the city centre, these 15 monuments give us an insight into the main architectural trends and styles that developed and gained ground in each period, and contain some of the greatest masterpieces of monumental painting and mosaic art of the early Christian and Byzantine era. 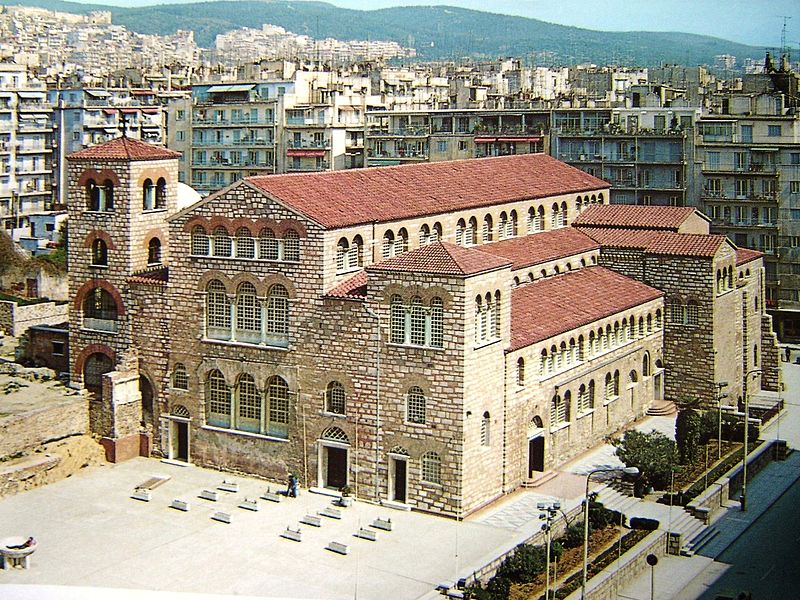 The Saint Demetrius basilica (by ActFree via Wikimedia Commons)

These are public buildings intended mostly for worship, with the exception of the Byzantine baths and the city walls. The thirteen religious monuments, among the most noteworthy of the Byzantine period, illustrate the evolution of Byzantine ecclesiastical architecture and its stylistic variety: from the dominant style of the Early Christian basilica, a five-aisled basilica with a transept, to the transitional domed church of the early Byzantine period, then to the cross-in-square style of the Middle-Byzantine era, and finally to the cross-in-square churches with an ambulatory of the Late Byzantine era.

These temples also feature mural paintings, mosaics and frescoes representative of some of the main artistic trends that developed in Byzantine monumental painting, from its origins (in the Rotunda, Saint Demetrius, Hosios David), through the post-Iconoclastic period (Hagia Sophia) and the so-called "Komnenian era" (frescoes in the Hosios David Church, Latomou Monastery), culminating in the following centuries in what is conventionally known as the "Palaeologan Renaissance" (late Byzantine period).

One of the city's most iconic monuments is the famous Rotunda, a circular building of around 306, commissioned by Emperor Galerius as part of an imperial precinct linked to his Thessaloniki palace. Originally intended as a temple for Zeus or, according to others, as a mausoleum for Galerius himself (hence the name Tomb of Galerius, by which it known mostly outside of Greece) it was later converted into a church (now consecrated to St George). As shown by the excavations, at the time of its construction the Rotunda and the imperial palace were connected to the Arch of Galerius by a triumphal road. It has undergone extensive restructuring and enlargement over successive periods, and contains some of the most splendid mosaics of early Christian art. 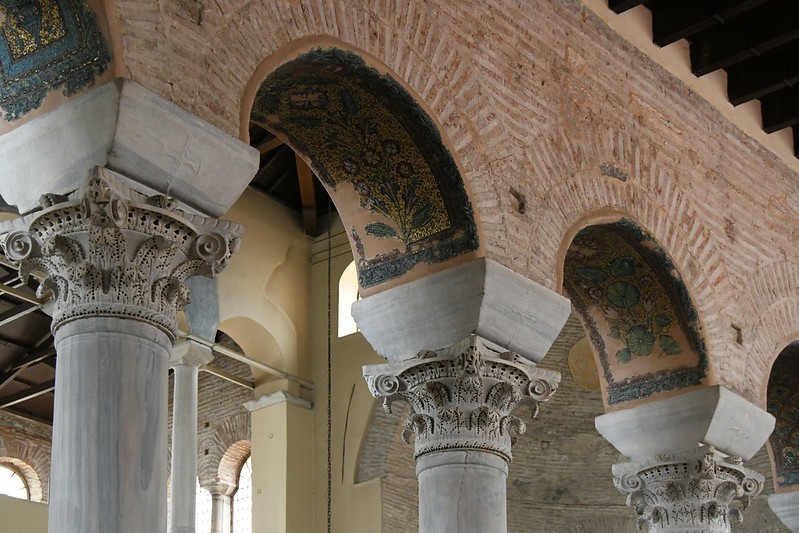 Column capitals (5th c.) at the Church of the Acheiropoietos (by Herbert Frank via flickr)

In the centre of the town is situated the Church of the Acheiropoietos, a three-aisled basilica with a narthex and traces of an exonarthex, dating to the 5th century. The church owes its current name, first attested in the 14th century, to a miraculous and acheiropoietos ("not made by [human] hand") icon of the Virgin Mary that was presumably housed there. The church is notable above all for its architectural decoration consisting of a series of elegantly crafted columns, which can be dated to the 5th century and are attributed to Constantinopolitan workshops. Not far from there we find the basilica of Saint Demetrius (the city's patron saint), with its current form dating to the 7th century. It is a five-aisled basilica with a transept and underground crypt, featuring exceptional marble and mosaic decoration. Impressive mosaics can also be admired in the early Christian Latomou Monastery (6th century) and its katholikon (main church), Hosios David.

The Walls of Thessaloniki, another example of early Byzantine architecture, were built at the end of the 4th century under the rule of Emperor Theodosius, with extensive sections still being preserved today. 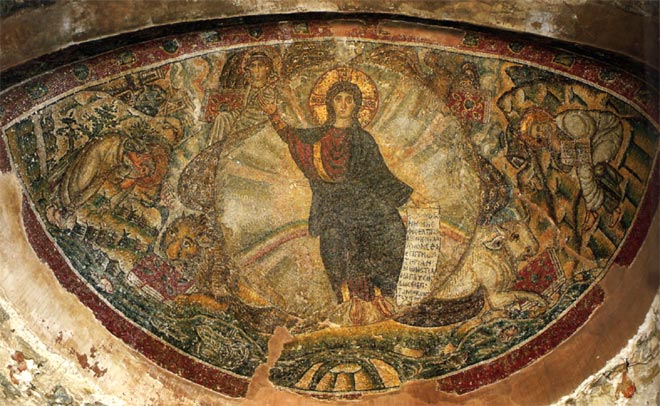 The famous mosaic covering the vault of the apse of Hosios David, Latomou Monastery, depicting the vision of Ezekiel (©Hellenic Ministry of Culture and Sports)

The churches of Hagia Sophia and Panagia Chalkeon ("Our Lady of the Copper-smiths") date to a later period. The first one dates to the 8th century and is exemplary of a transitional period in ecclesiastical architecture where the Greek-cross plan is combined with the use of a dome; its mosaic decoration dates to three different phases of Byzantine art, and its majestic dome mosaic depicting the Ascension of Jesus into Heaven (late 9th century) is one of the most important specimens of the so-called "Macedonian Renaissance". The latter, commonly referred to as the "Red Church", is a cross-in-square church dating to the 11th century, with evident Constantinopolitan influences, built using the "hidden brick technique".

The Church of Hagia Sophia, 8th c. (by Andrew Zorin via Wikimedia Commons)

The Byzantine baths, which date back to the 13th century, are located at the foot of the Upper Town of Thessaloniki (Ano Poli) and are the only surviving secular Byzantine building in the city.

The remaining seven churches, those of Saint Panteleimon, the Holy Apostles, Saint Catherine, Prophet Elijah, the Transfiguration of the Saviour, the katholikon of the Vlatades Monastery, and the single-nave church of Saint Nicholas Orphanos, all belong to the late Byzantine period and were built between the 13th and 14th centuries. They exemplify the evolution of the final period in the development of Byzantine art, known as the "Palaeologan Renaissance". Built in a variety of architectural styles, the late Byzantine churches of Thessaloniki are distinguished by their harmonious and elegant proportions and their sumptuous wall decorations. 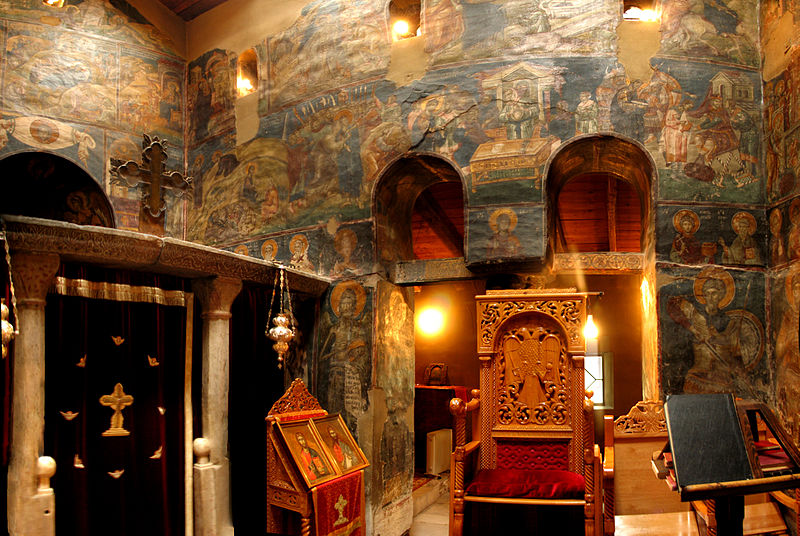 These include the Church of the Holy Apostles (Agioi Apostoloi) for its remarkable ceramic decoration and the Church of Saint Nicholas Orphanos for its imposing wall frescoes, which represent one of the most complete pictorial complexes from the Palaeologan period preserved in Thessaloniki.

Originally published on Punto Grecia by S. Dimitriadis. Adapted into English by N. Mosaidi. (Intro photo: The Tomb of Galerius, now the Church of Agios Giorgios, better known as the Rotonda (by Daniel Tellamn via flickr)

Also read via Greek News Agenda: Philippi: a "small Rome" in Macedonia; Three religions meet in the Castle of Ioannina; The Monastery of Daphni: retracing the city's Byzantine past; The historic Sumela Monastery in Trabzon