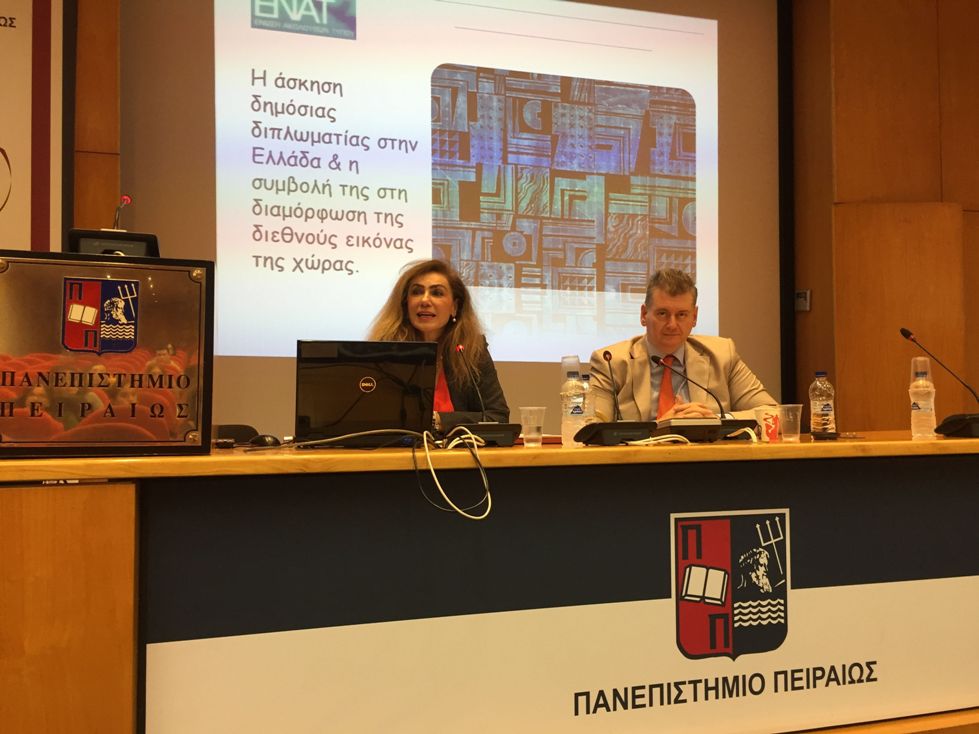 “Greek Public Diplomacy and its contribution to the country’s image abroad” is the title of a presentation by Mary Vaxevanidou, Head of the International Communication Directorate of the Greek Ministry of Foreign Affairs, at a conference organized by the Strategic Communication & News Media Lab of the University of Piraeus, headed “The Image of post-crisis Greece: New Challenges - Innovative Solutions” (November 19, 2019). Holder of three Master's degrees and a Ph.D. in Business Administration Ms. Vaxevanidou has written five books on HR, communication and management and has served in The Embassy of Greece Press and Communication Offices in Nicosia, Sofia and The Hague. In her presentation, she outlined the role of Public Diplomacy in Greece and the way it is conducted by Communication Officers both in Greece and abroad. The international image of Greece is also analyzed.

1. The practice of Public Diplomacy

Public Diplomacy (PD) is a “soft power” type of diplomacy aiming to advance a country’s image abroad in several policy domains, promoting the country’s comparative advantages. According to Simon Anholt, the international image of a country is not defined only by its governmental politics but also by its exports, investments, tourism, education/culture, etc.

In Greece, Public Diplomacy is a horizontal type of diplomacy assisting all forms of diplomacy (political, economic, cultural, educational, tourism) and is conducted by 180 specialized Communication Counselors, graduates of the National School of Public Administration. These officers hold, to a large extent, postgraduate (including doctoral) degrees, are proficient in 3-4 foreign languages and have extensive experience in practicing Public Diplomacy both in Greece and abroad.

One example of PD best practice was the communication management of the Hellenic Presidency of the Council of the European Union in the first semester of 2014.

Moreover, Communication Officers were responsible for the design, management and content production for the gr2014.eu website and for the Presidency's overall digital presence, in collaboration with the Greek Presidency Office.

The Greek Presidency’s communication practices received significant amounts of positive coverage and were regarded as a best practice example for other European countries, actively contributing to countering stereotypes about the country, despite having followed a long period of negative publicity, due to the country’s severe financial crisis.

Another example of PD best practice was the planning and implementation of the "Year 2016 - Greece in Russia and Russia in Greece" communication strategy that was assigned to Communication Officers. This included designing and managing the "Year 2016" official website and social media accounts, as well as organising Press trips along with a large number of parallel events and promotional activities.

The highlight of the project was a children's drawing contest launched through the official website under the title "What Greece means to me", for Russian children aged 6-10 years. The contest, which attracted 1,200 participants from around Russia, was promoted -among other communication outlets- through a television advertisement airing on Russian television, increasing the general public’s interest in Greece.

Creation of digital material at the Ministry

Important tools in the practice of public diplomacy are foreign language online platforms that present the modern face of Greece through the production of original content in five languages (English, German, French, Spanish and Italian). These online media, whose content is produced by the Communication Counselors of the Digital Communication Unit of the Media Diplomacy Directorate, are promoted through the social networks of Greek Embassies around the world and have a large number of subscribers in Greece.

The Secretary-General of Public Diplomacy, Religious and Consular Affairs, Constantinos Alexandris, was recently interviewed by Greek News Agenda, the English language site, where he spoke about the central axes of public diplomacy. 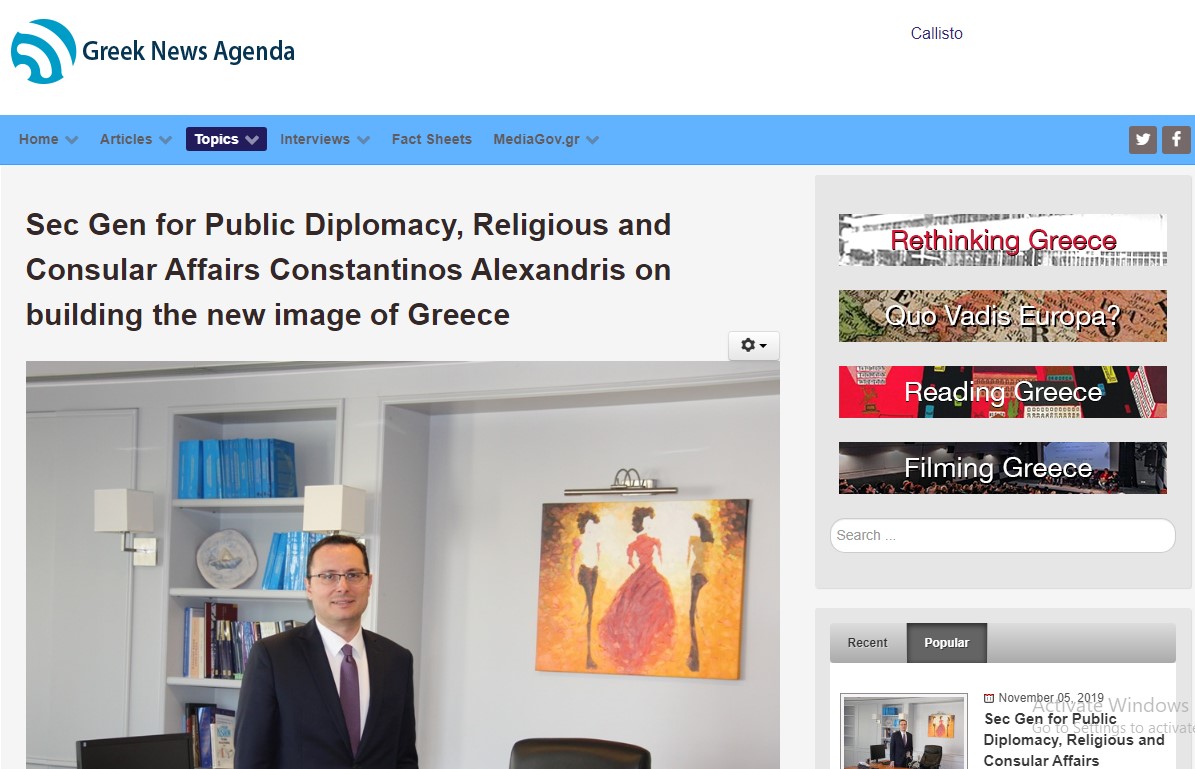 The image of Greece in international media

Communication Officers of the Study and Analysis of International Media Unit of the Directorate of International Communication consistently monitor and analyze news items from around the world daily, focusing on some 40 leading media, including news agencies, newspapers, magazines and websites in the USA, Britain, France and Germany.

According to data relating to a period of 52 months stretching from June 2015 to October 2019, there is a huge volume of news items from June 2015 dealing mainly with the likelihood of “Grexit” and the possibility of Greece's bankruptcy. From August 2015 to April 2016, a significant share of items referred to the refugee crisis, while from early 2018 to the end of 2018 a great part related to foreign policy (Prespa Agreement, Northern Macedonia and Greece-Turkey issues).

The analysis also makes note of the negative and positive news coverage of the country. According to the data gathered, there is a clear reversal of the positive-negative polarity in the first half of 2019 when compared with the period July - October of the same year; as of July 2019, the number of positive articles on Greece exceeds the negative, leading to an image of the country not seen since before the crisis (2006). 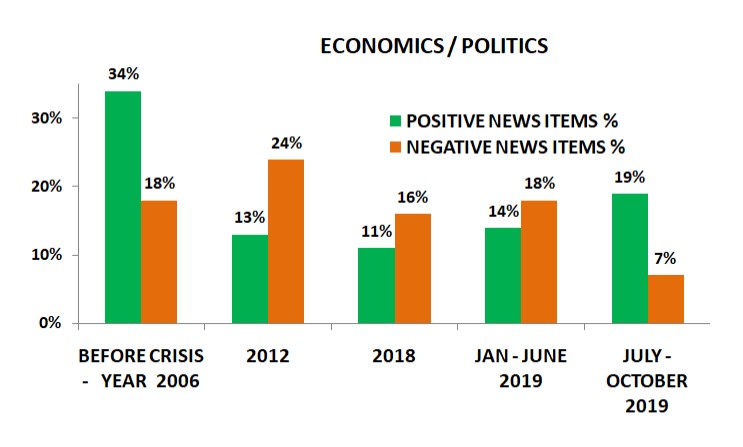 According to the USC (University of Southern California) Center on Public Diplomacy's Index Measuring Country Image (Public Diplomacy INDEX - Soft Power 30), Greece's image lies at the bottom of the ranking list, behind countries such as Poland and the Czech Republic.

What is remarkable however is the fact that polling of ordinary citizens of other countries ranks Greece above (22nd place) its actual performance measurements (digital transformation 29th place, operational / business environment 28th place), education 28th place, culture 23rd place, international relations (Global Εngagement) 22nd place, governance 25th place). This means that the country's communication policy is effective and efficient, creating a much better country image for international audiences than it really has.

For the year 2019, the Annual Report notes that despite the country’s apparent score slide by two points (two places) in 2019 compared to previous years, the election of the country's first government following the country’s exit from the fiscal adjustment programmes of recent years has stirred optimism among foreign leaders, with the new Prime Minister being widely held in respect.

According to the report, regardless of Greece's rank decline, if the new government fulfills its promises of reforms for both international investors and young people facing high levels of unemployment, then it would not be an overstatement to say that Greece could improve its ranking. Digital diplomacy is considered a useful tool in clearly stating Greek priorities. 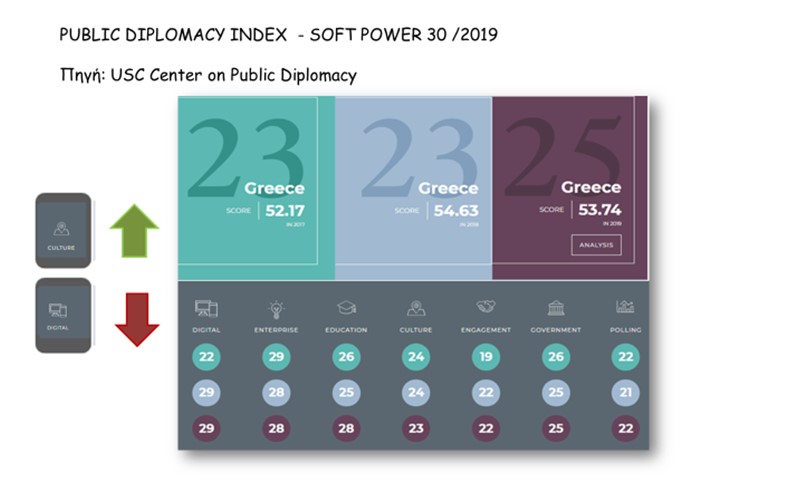 The New Face of Public Diplomacy in Greece

Following the formation of the new Government in Greece last July, the entire sector of Communication Counselors was transferred to the newly established General Secretariat for Public Diplomacy, Religious and Consular Affairs, whilst a Secretary-General responsible for running the country’s Public Diplomacy was appointed for the first time.

This political decision is important for the coordination and effective conduct of the country's foreign policy, especially in terms of consolidating the importance of Public Diplomacy.

Read also: The full version of the presentation (in Greek) here.